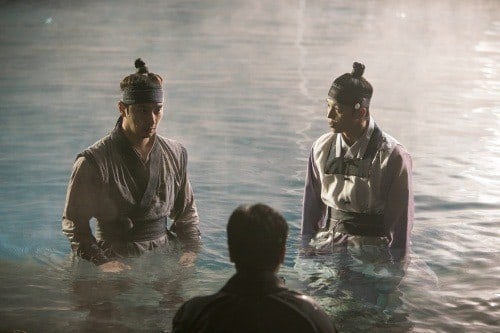 In the fourth episode of KBS 2TV’s drama “Queen For 7 Days,” Yeon Woo Jin and Chansung appeared for the first time as grown-up versions of their characters, Lee Yeok and Seo No.

Their first appearance was full of action, as the two battled each other on a ship on a dark, stormy night. The ending scene, which was shot underwater, created a lasting first impression of the two characters.

Yeon Woo Jin explained, “The initial shootings were difficult because it involved a lot of action. But we were able to shoot successfully by being attentive to each other.”

He also shared his most memorable moment, saying, “The underwater scenes where Chansung and I shot in freezing cold weather were very memorable.”

The production team of “Queen For 7 Days” complimented Yeon Woo Jin and Chansung’s effort, which helped boost their on-screen friendship and bromance.

“Queen For 7 Days” airs every Wednesday and Thursday. Watch the latest episode on Viki!

2PM
Chansung
Yeon Woo Jin
Queen for 7 Days
How does this article make you feel?