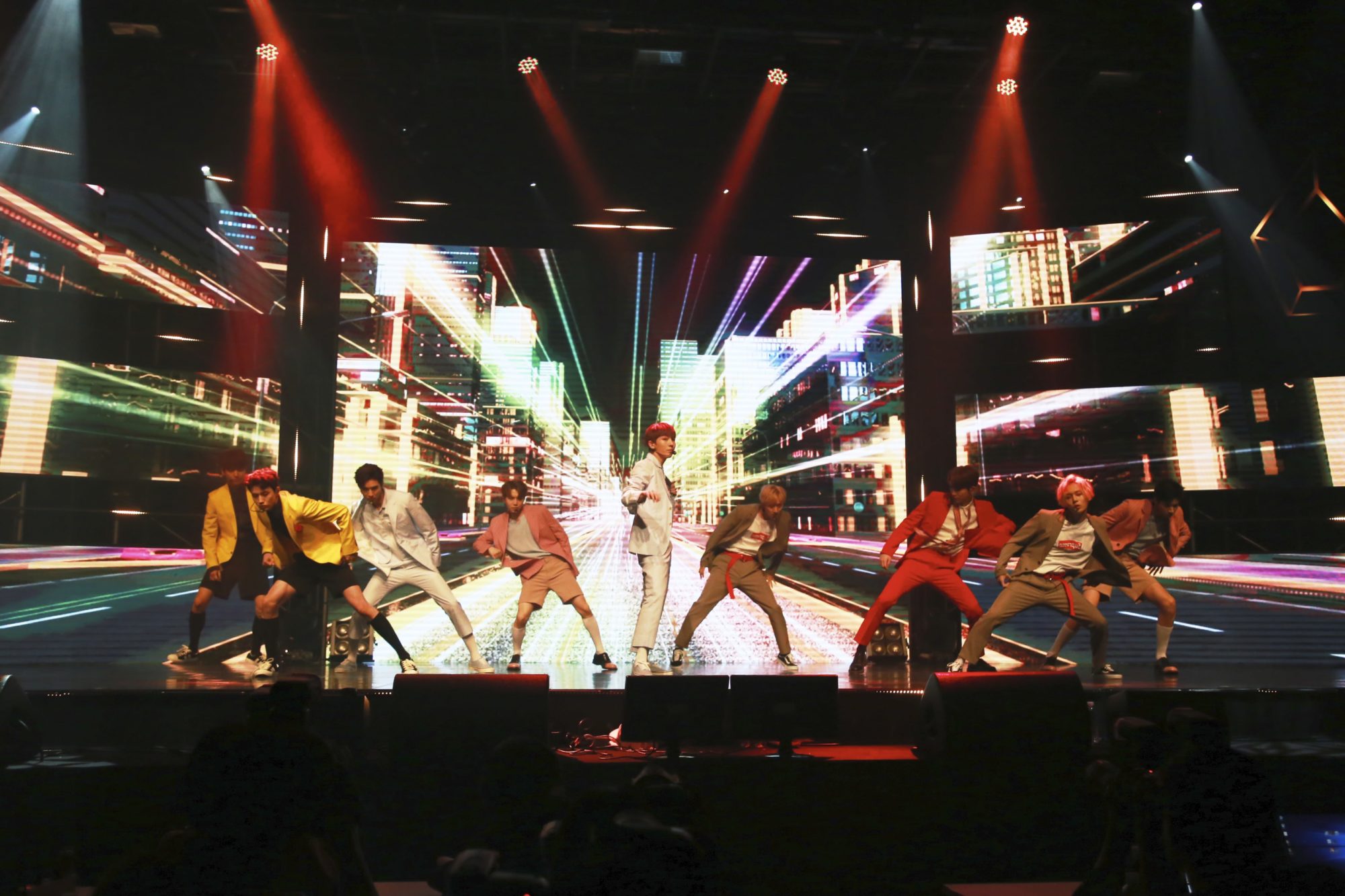 On June 12, Soompi was at PENTAGON’s comeback showcase for their third mini album “Ceremony”!

The showcase began with a soothing performance of their pre-release track “Beautiful,” which was written by BTOB’s Ilhoon.

PENTAGON is normally known for their powerful performances, but their ballad track “Beautiful” also received lots of love. Shinwon said, “I was thankful that we had received such a great song from our senior. When we were recording the song, [Ilhoon] directed us so full-heartedly that my love and respect for BTOB grew even more.” Kino added, “It was our first time recording a song that was given to us by a senior, so we were all nervous. But Ilhoon talked to us nicely and created a comfortable environment.” 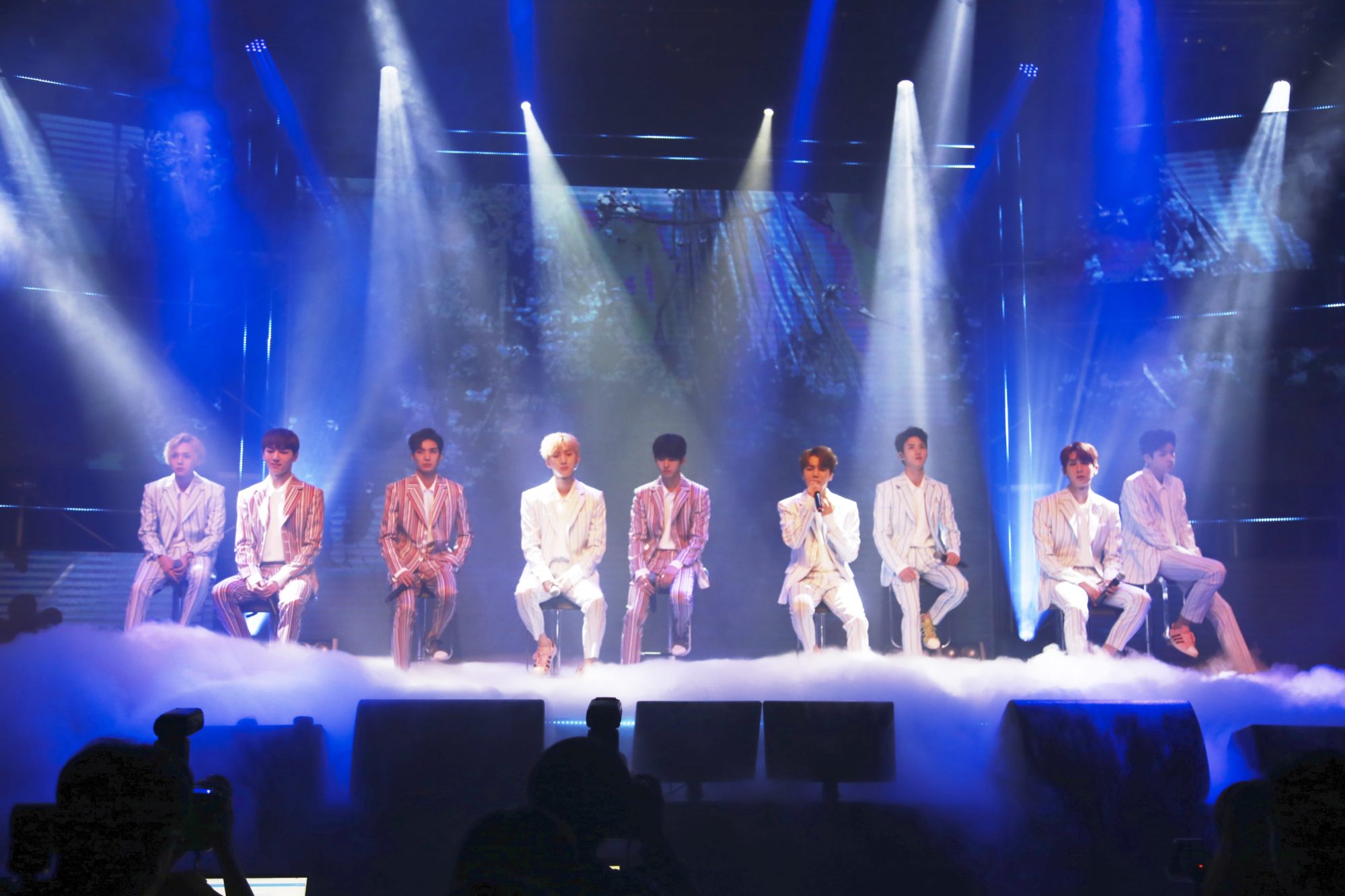 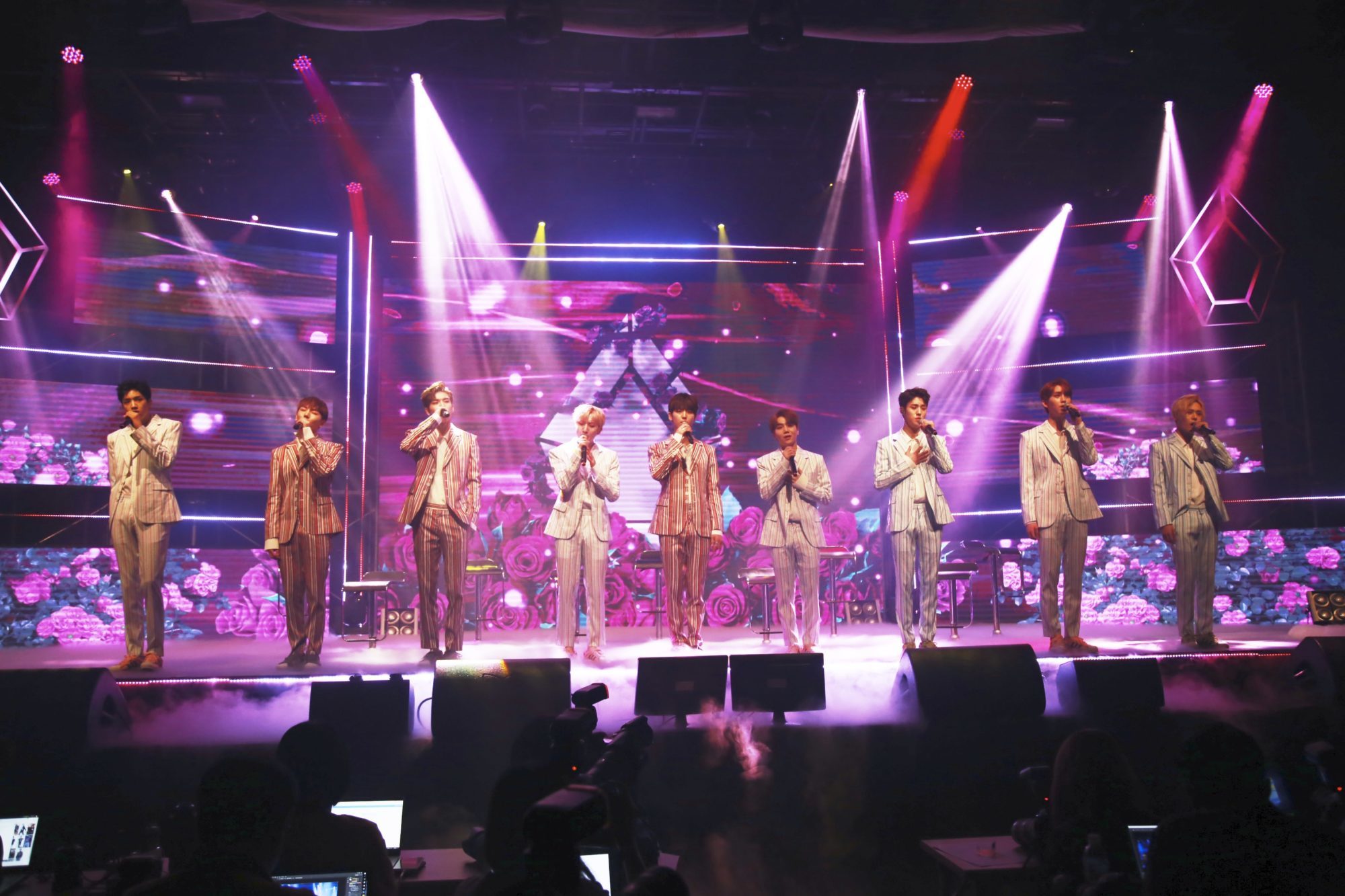 Making a comeback six months after “Can You Feel It,” they talked about what they had been up to during those six months. Hui explained that they had gone on a tour around Asia to meet with fans overseas. They spent the rest of their time preparing for this comeback. 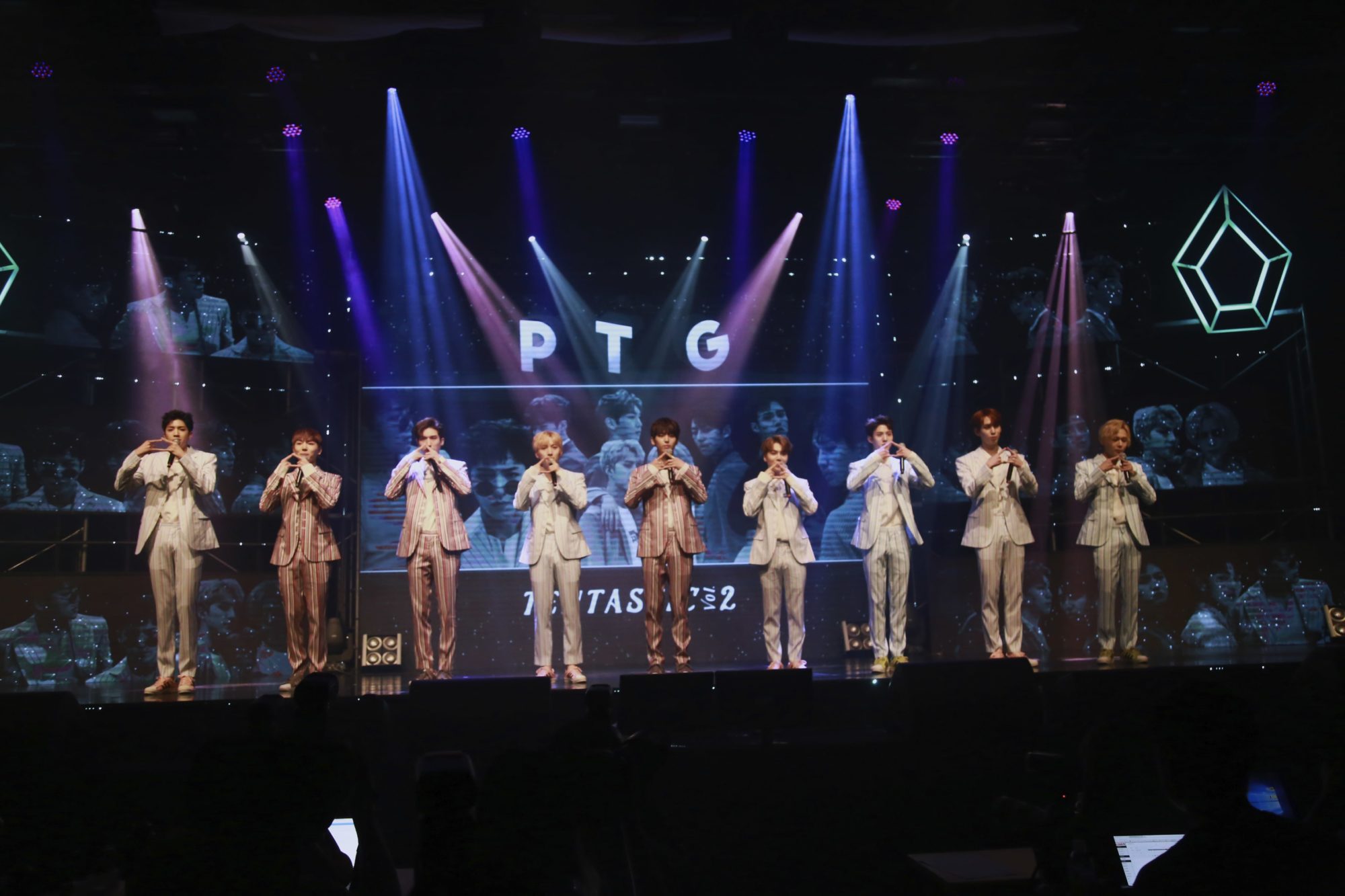 The showcase host asked Hui and E’Dawn to comment on Triple H, their unit with HyunA. E’Dawn said, “We were able to show a different side to us from our usual PENTAGON promotions, so that was great.” Hui added that HyunA cared a lot for PENTAGON and even visited them at their music video set to monitor how they were doing and give them advice. Thanks to her support, they were able to finish filming well.

Recently, Hui also gained attention as the producer of “Never” from “Produce 101 Season 2,” which sweeped music charts upon its release. Hui expressed his gratitude, saying that he had no idea the song would be so popular and that it felt like a dream.

Wanting to show a part of their performance from a mini concert that was held the previous day, Hui performed a perfect piano rendition of his own song “Never” while singing live. E’Dawn and Wooseok, who wrote the lyrics for the song, featured as rappers. 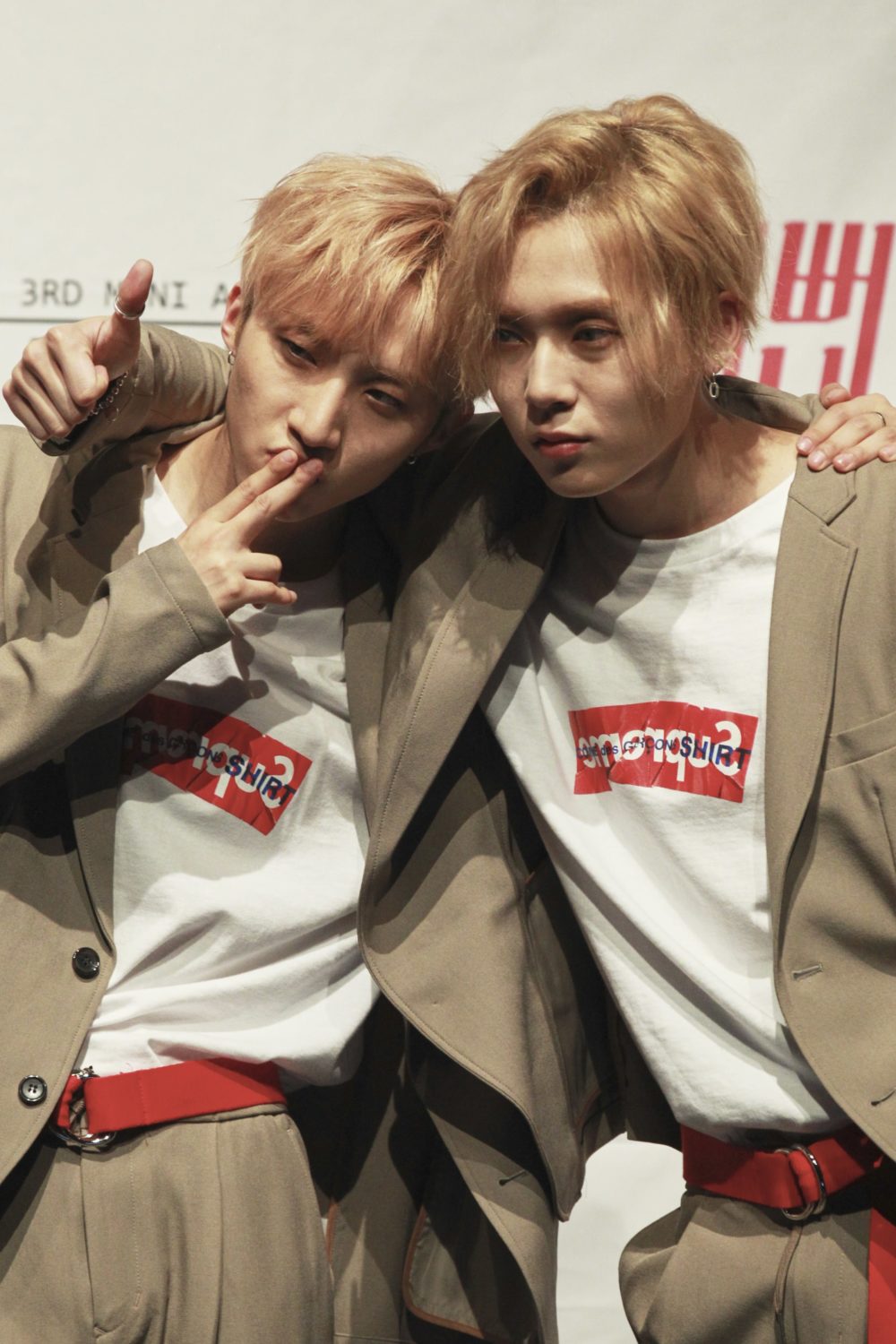 Their new album “Ceremony” also contains songs written by the members themselves, such as “Thank You” by Hui and “To Universe” by Jinho. Jinho said, “It hasn’t been long since I’ve started learning how to write songs, so I worked on it very carefully. I’m happy that a song that’s dedicated to our fans made it into the album.”

PENTAGON’s new title track “Critical Beauty” is a sophisticated retro-style song with elements of hip hop and rock and roll. While their songs “Gorilla” and “Can You Feel It” emphasized their masculine sides, this time they aimed to change up their style and show a tsundere (cold yet caring) charm. They focused on small details like gestures and facial expressions to effectively portray their new concept. In line with the tsundere concept, Kino showed a part of their choreography that he decided to name the “Hmph, hold my arm if you want to” dance. 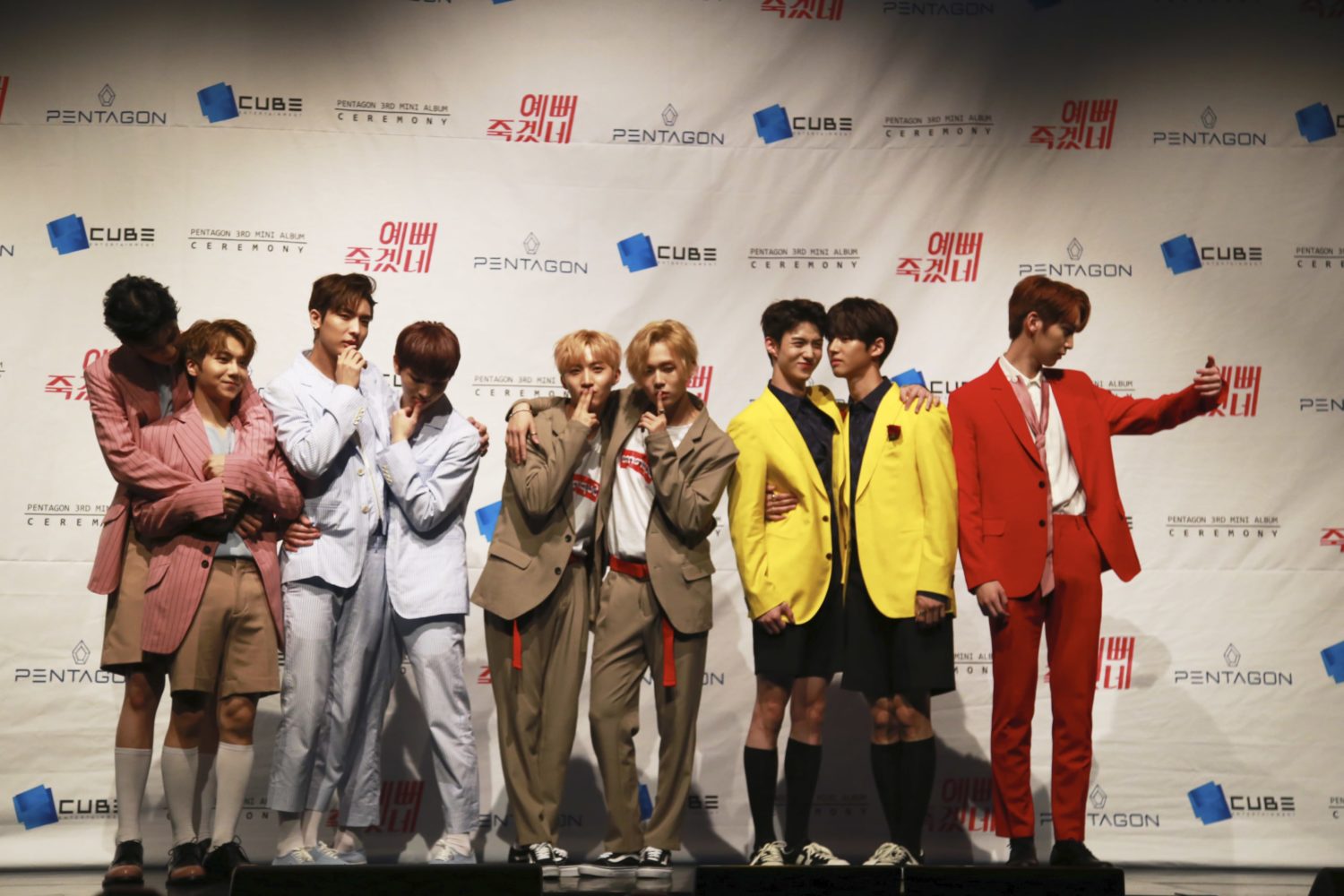 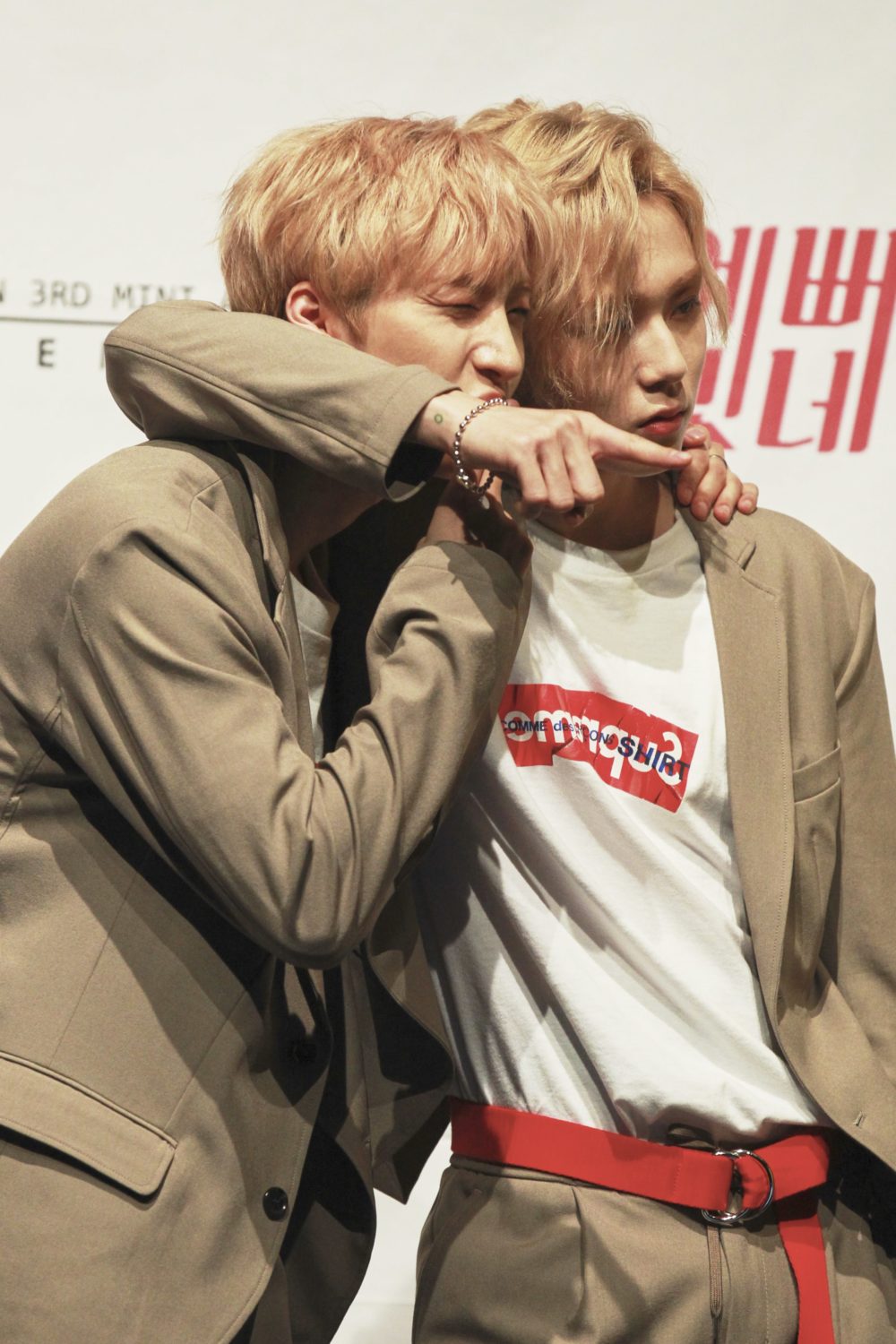 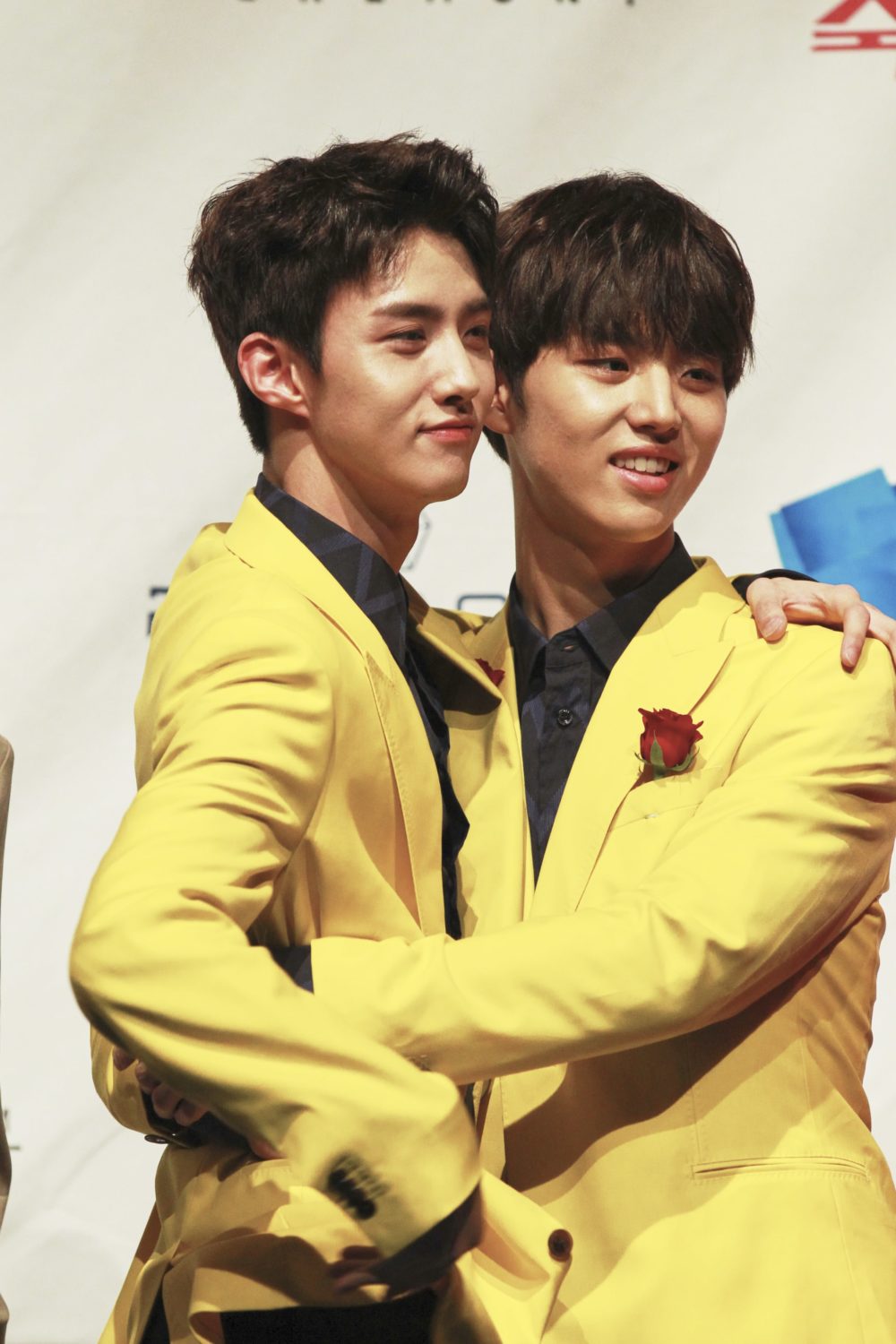 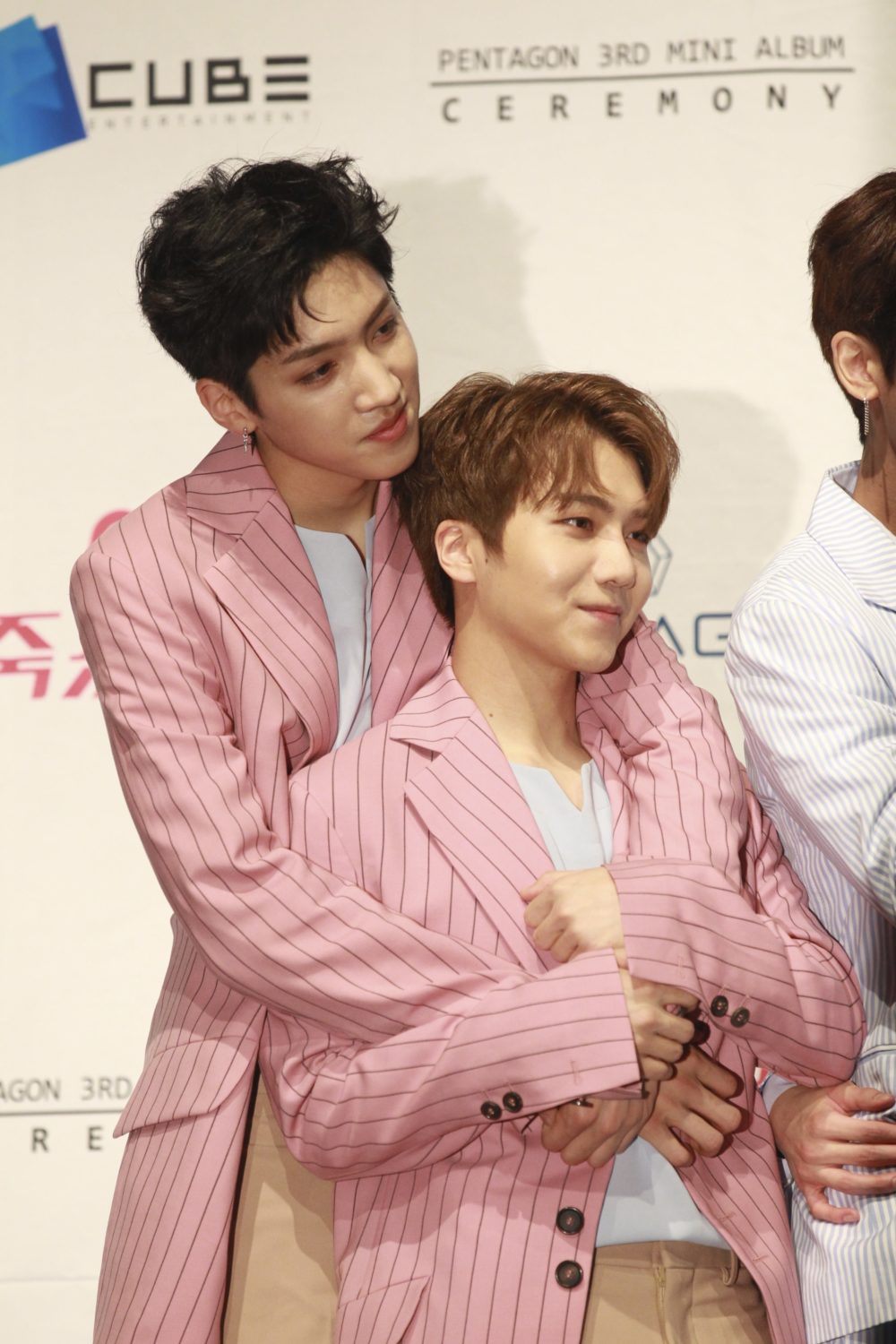 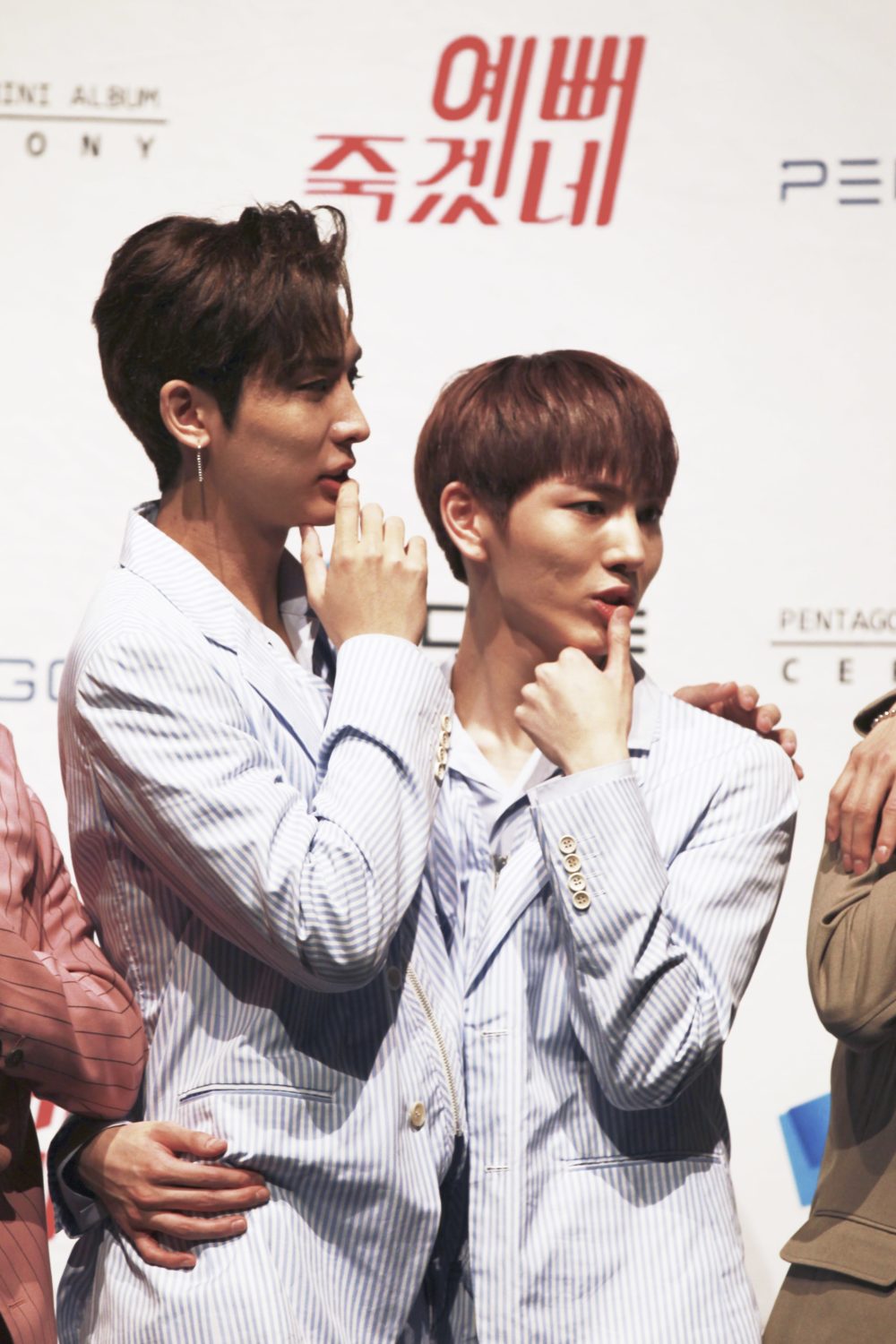 Asked to pick the member whose outfit fits them best, the members chose Shinwon. “My partner Yan An is taking a break due to an injury, so I’m the only one without a partner. I think the members picked me to cheer me up. They might have also chosen me because of my [broad] shoulders,” replied Shinwon.

Yan An, who is on a break, had been preparing for the comeback until he hurt his arm. The members expressed how sad they were that he wasn’t able to join them even though he had worked so hard. However, Hui explained that he was always with them. Yan An had watched them perform at their mini concert the day before, and he also did their cheer with them backstage. 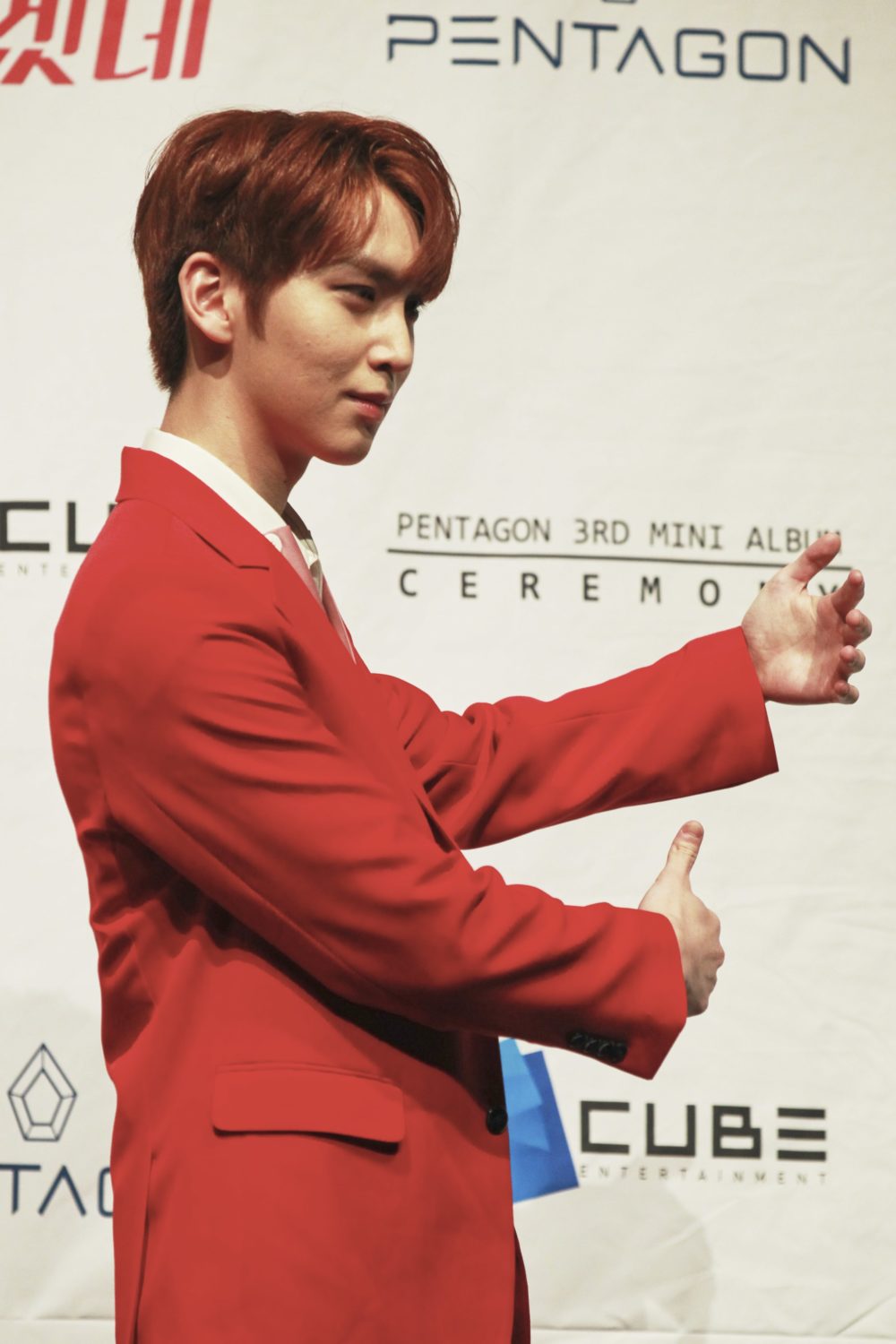 Because the members of PENTAGON are all interested in songwriting, fans may be able to see them return with a self-composed title song in the future. Hui stated, “Since debut, our goal was to become a self-composing group, and we are working hard on it. We hope to grow further and become acknowledged by the public. There are many possibilities open to us.”

It’s not easy for idols to promote while simultaneously creating new music, but Hui always tries to find time to work on music even when he’s busy with team activities. In response to a question asking if he felt pressured about the success of “Never,” he said, “I didn’t know ‘Never’ would receive so much love. I think I should also make songs that will make PENTAGON more widely known. My belief is that if we keep working hard, we will be able to reach that goal, so the plan for now is to do our best.”

Hui continued, “Honestly, I don’t think much about music chart performance. I feel like if we pay too much attention to the results, we won’t be able to fully show what we have. Our comeback track has a different feeling from our usual songs, so I’ll be satisfied if people can see a new charm to us [through this comeback].” However, E’Dawn added, “But if we do well on charts, I’ll be even happier.”

Asked to make a promise to fans, Shinwon said that if the song makes in into Melon’s music chart, he wants to buy coffee for fans at their music show performances. 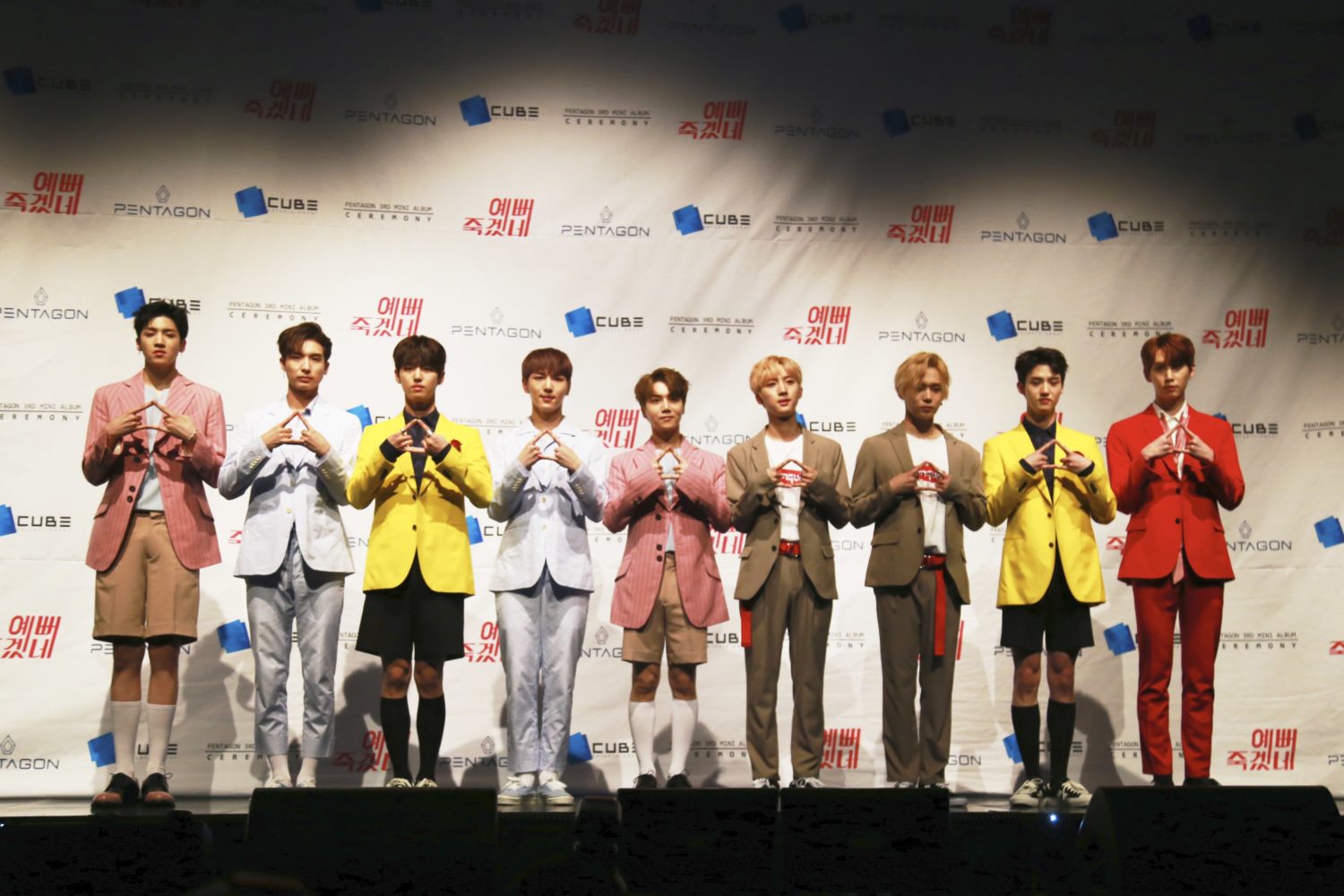 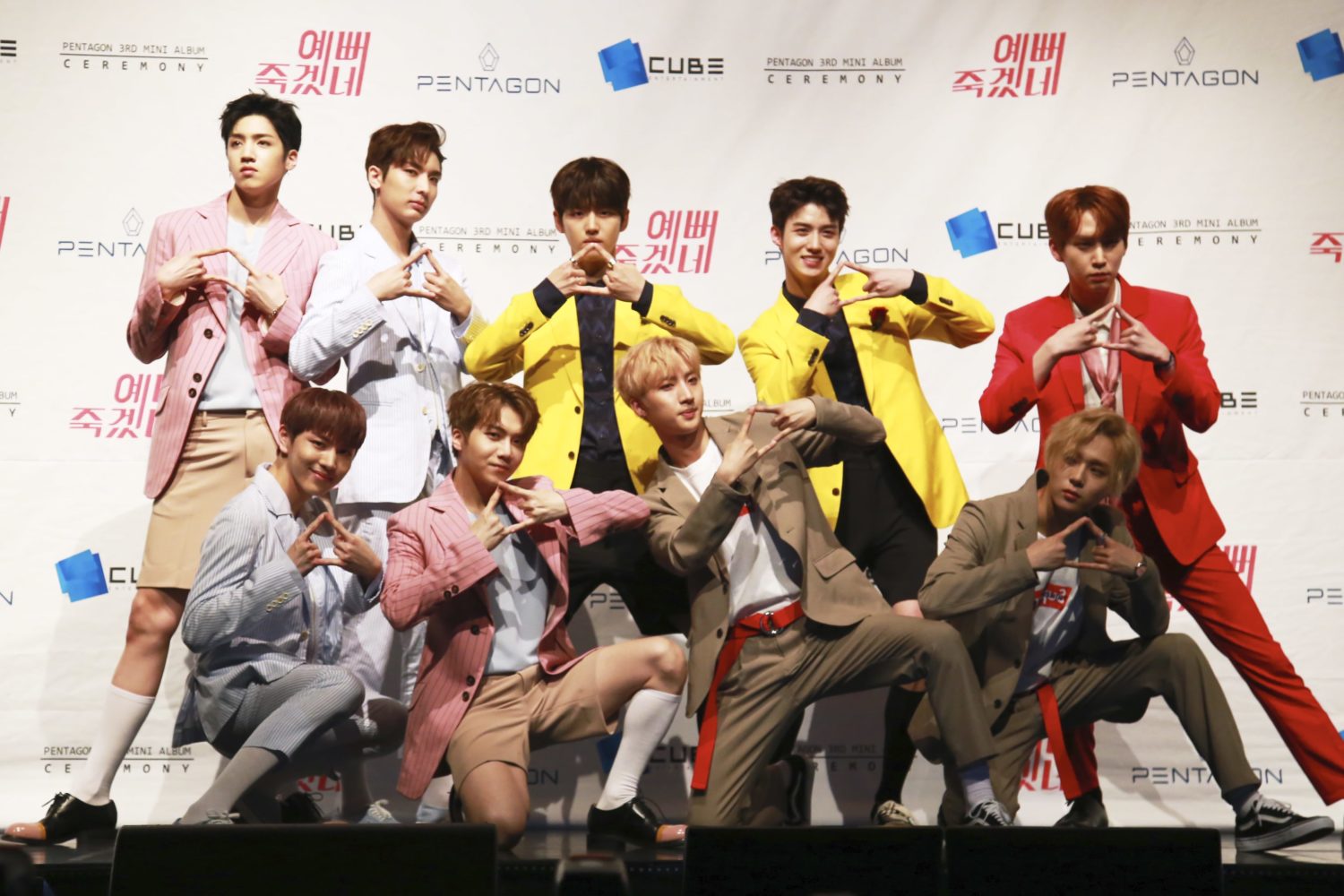 Lastly, Jinho revealed that their plans for this comeback is to make themselves and their music more well-known to the public. In line with this goal, Hongseok is filming a movie, while Hui and E’Dawn are promoting as Triple H.

Also check out what Wooseok said about his relationship with Cube trainee Lai Guan Lin from “Produce 101 Season 2”!

Here are photos of each member, courtesy of Cube Entertainment: 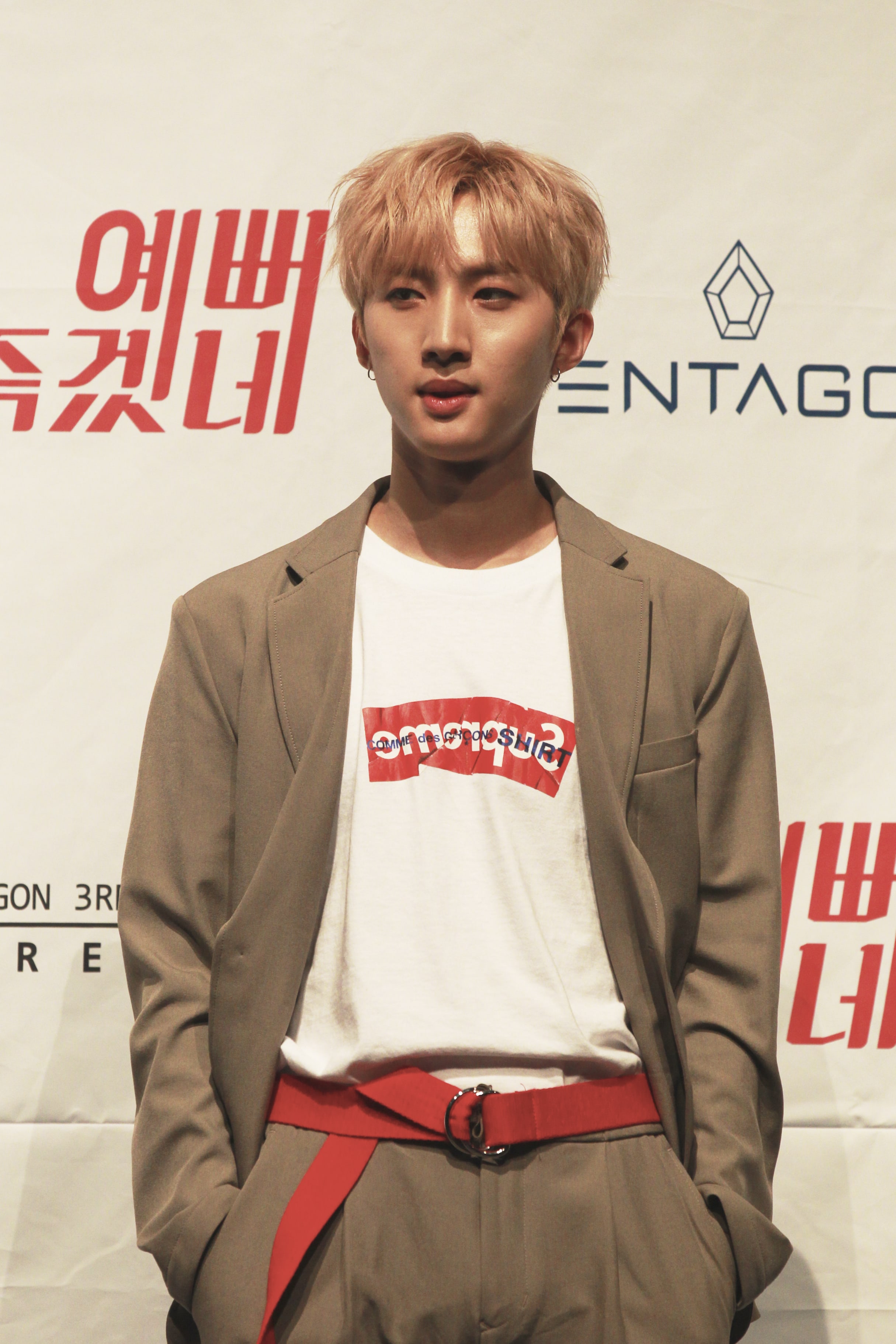 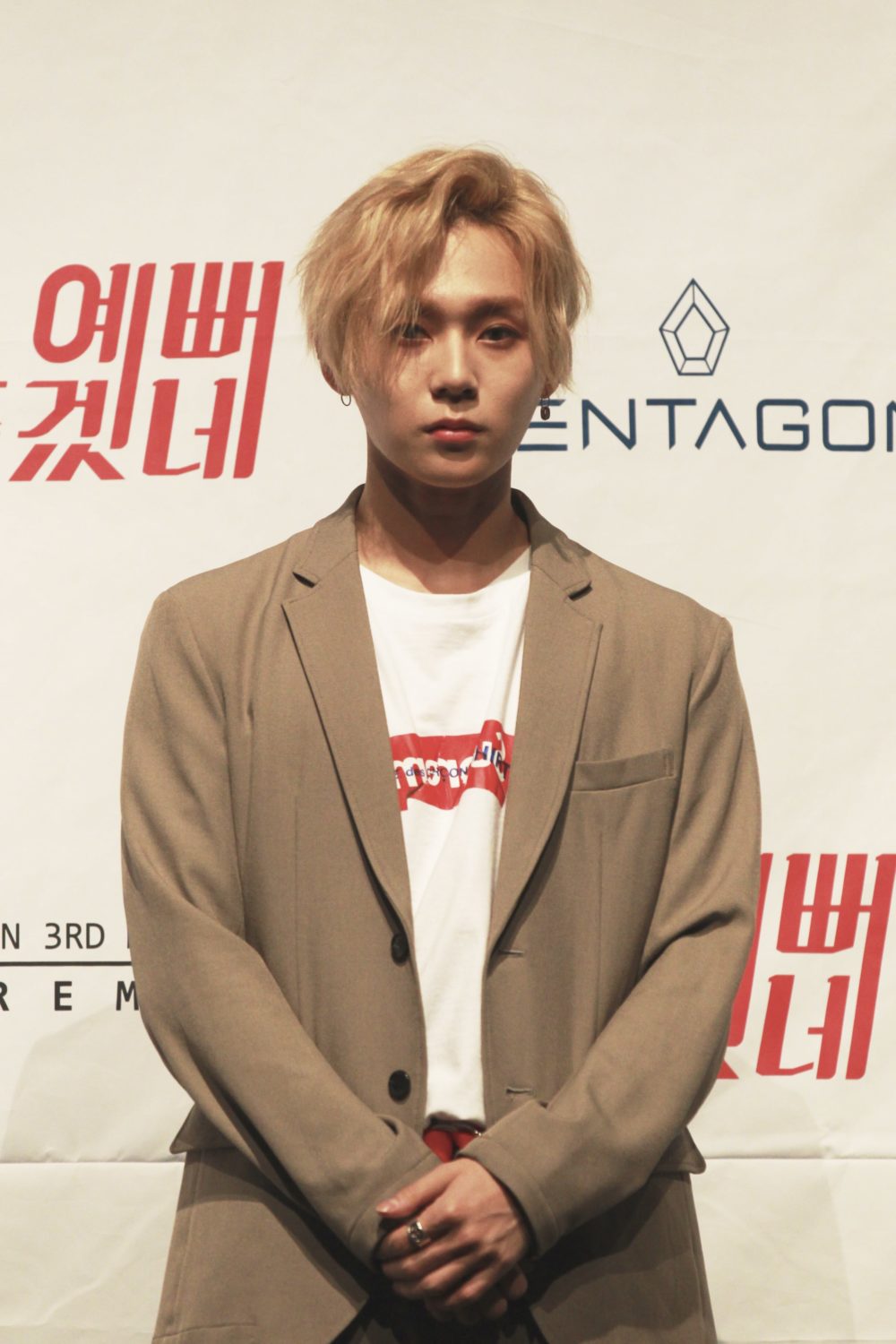 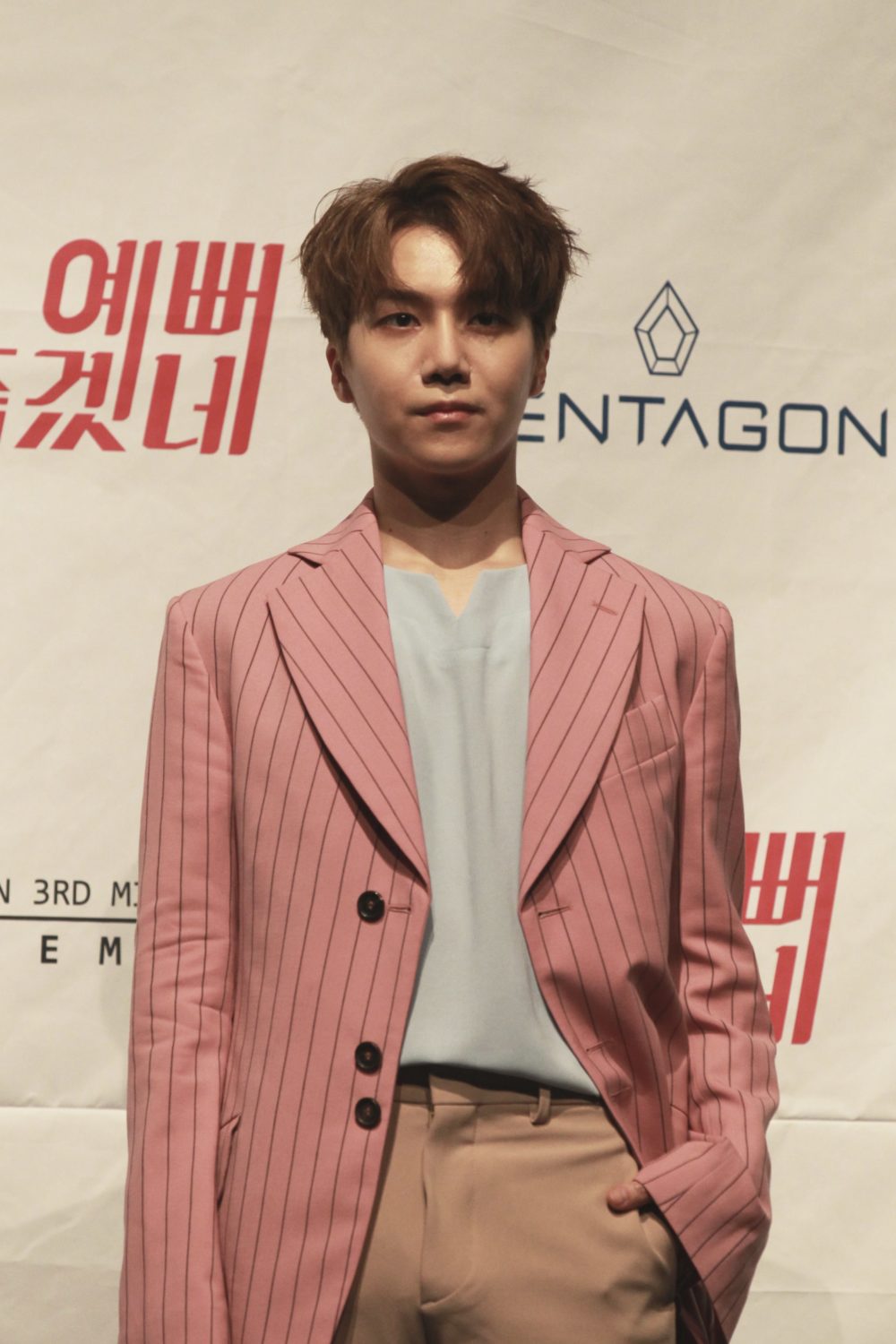 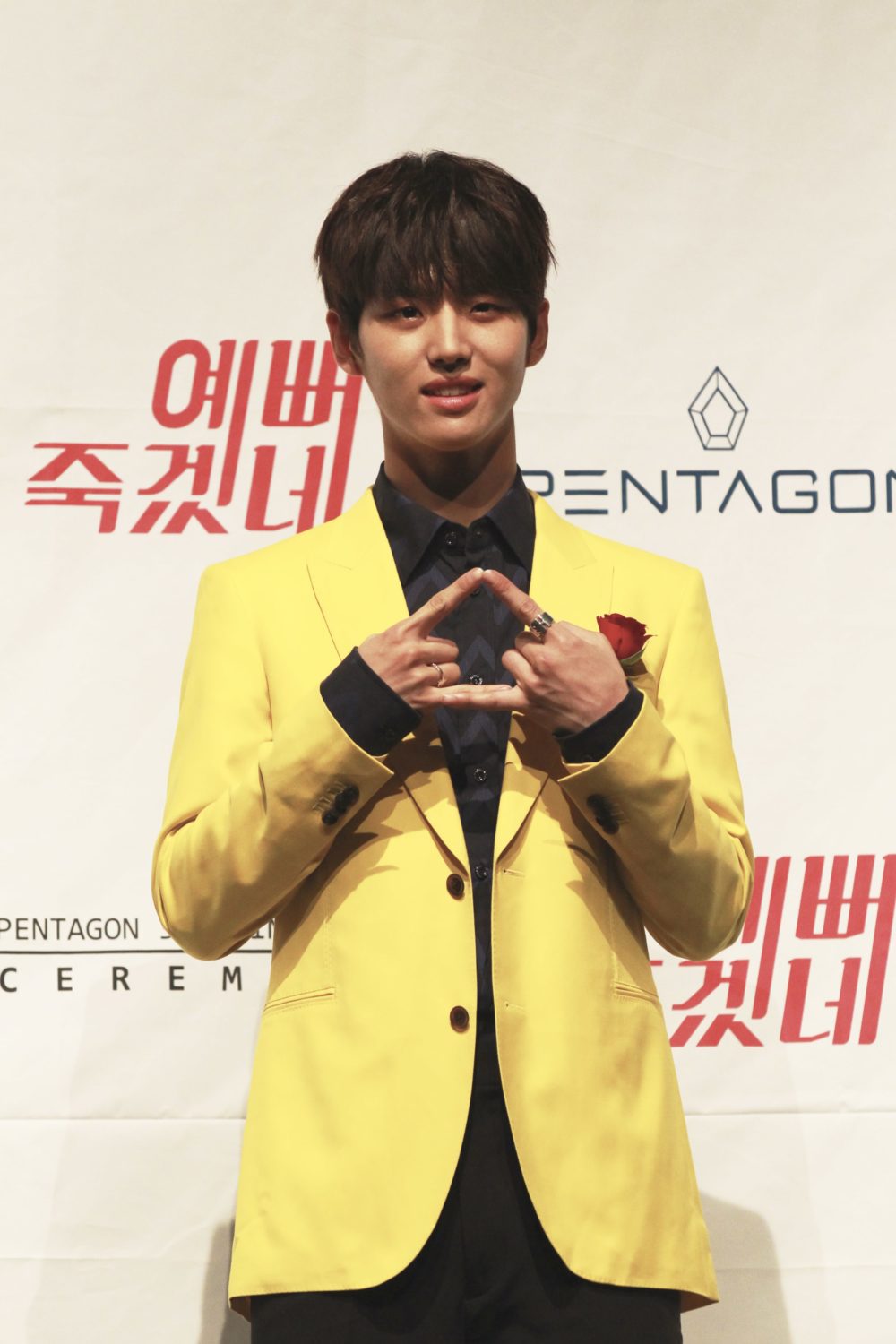 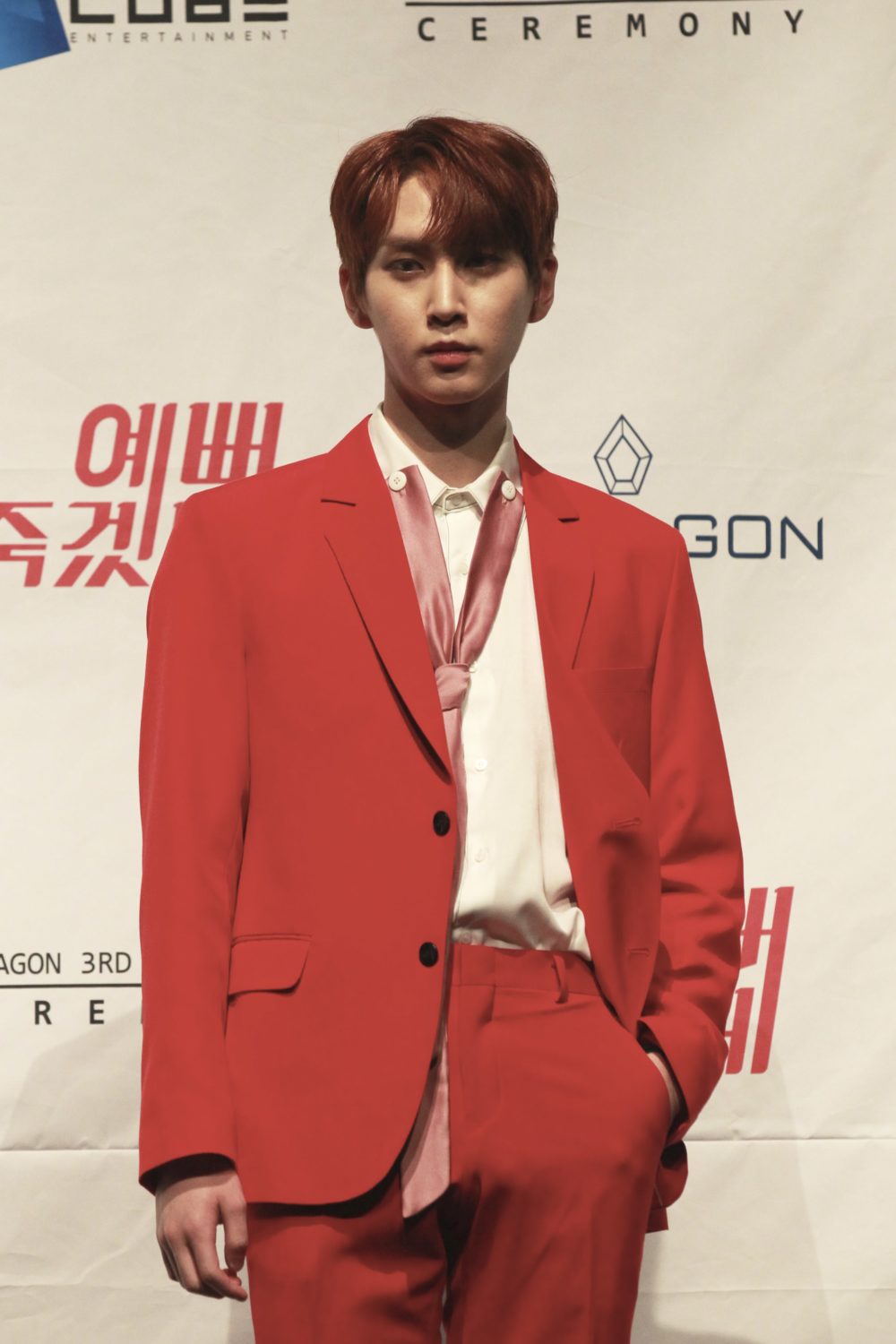 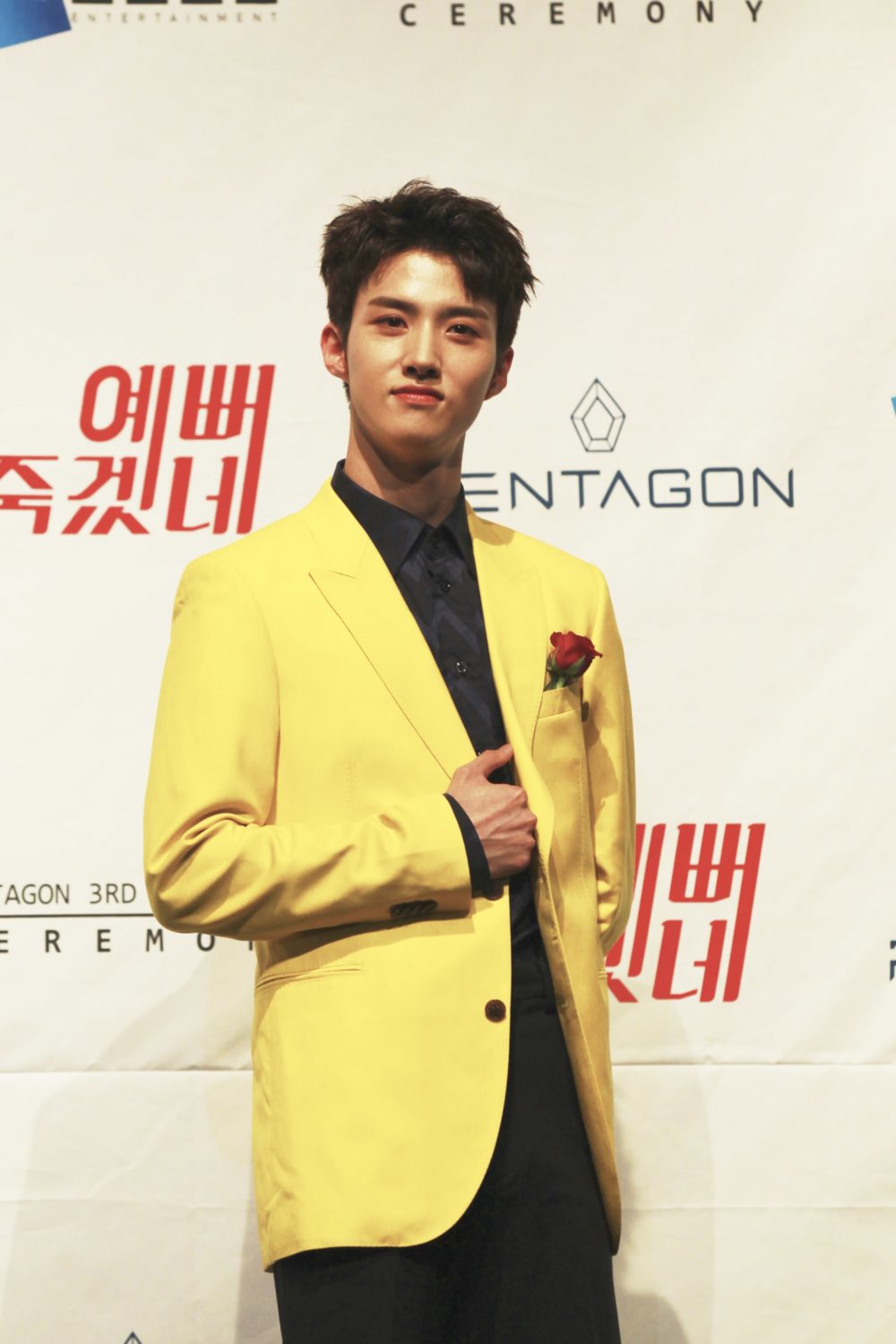 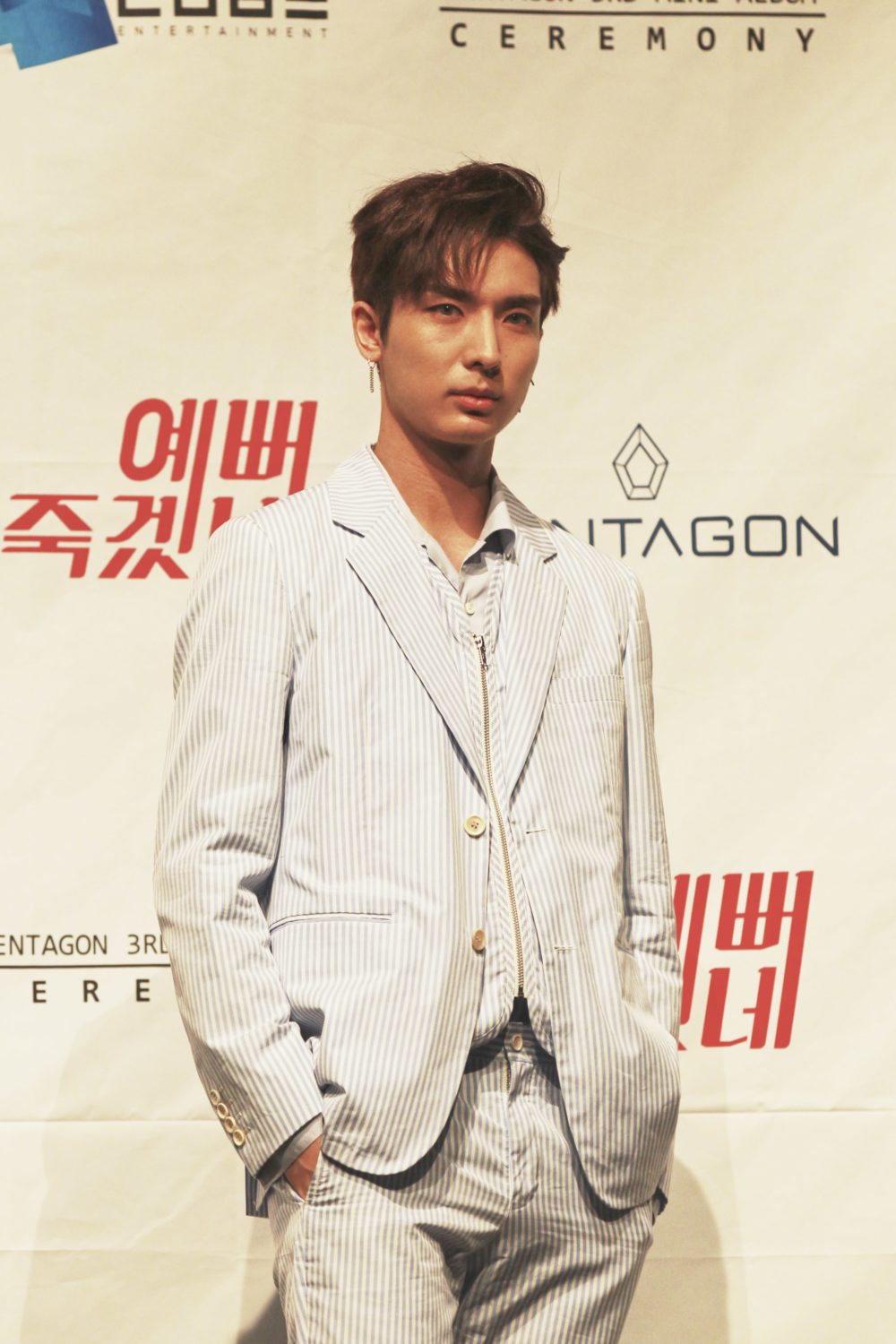 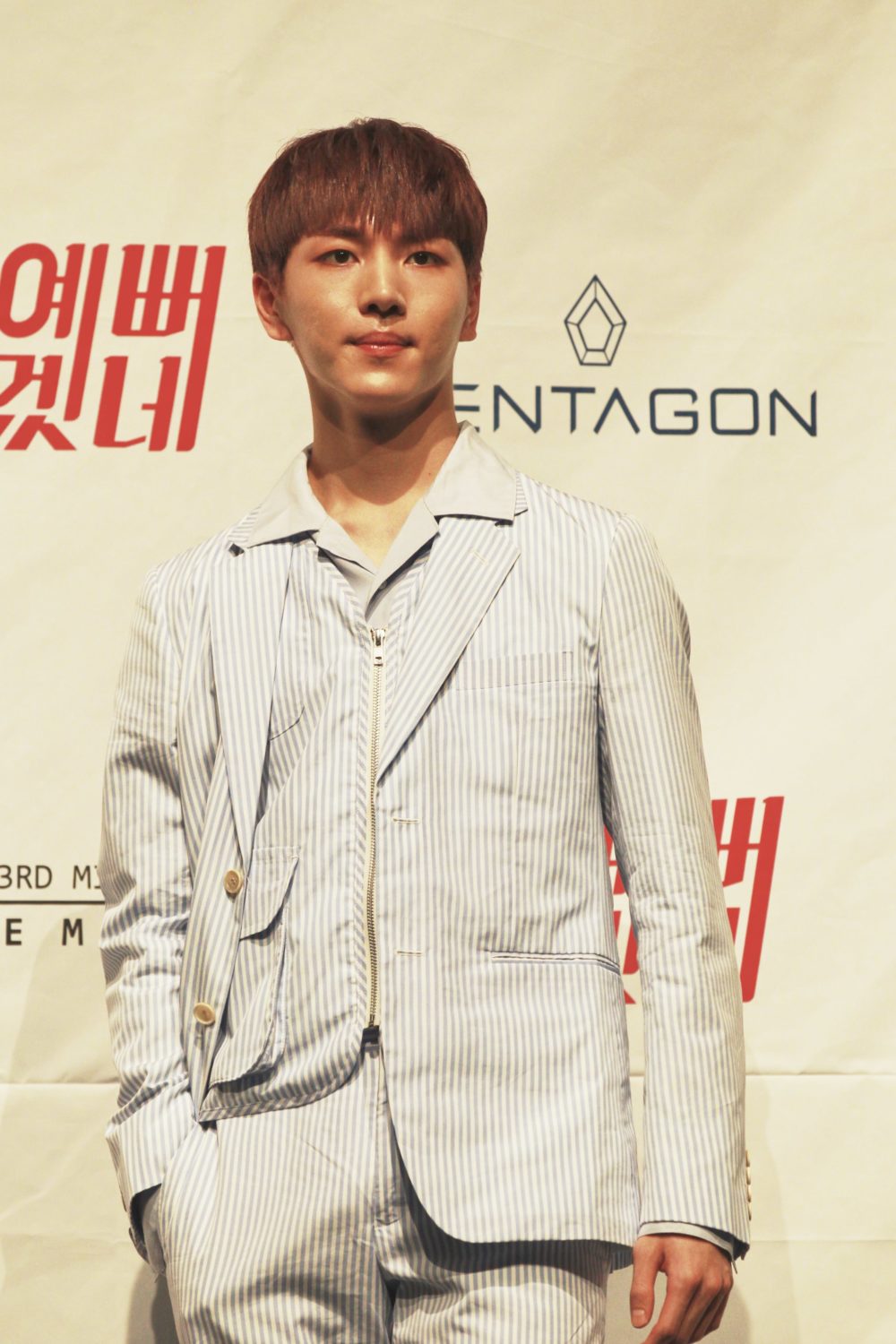 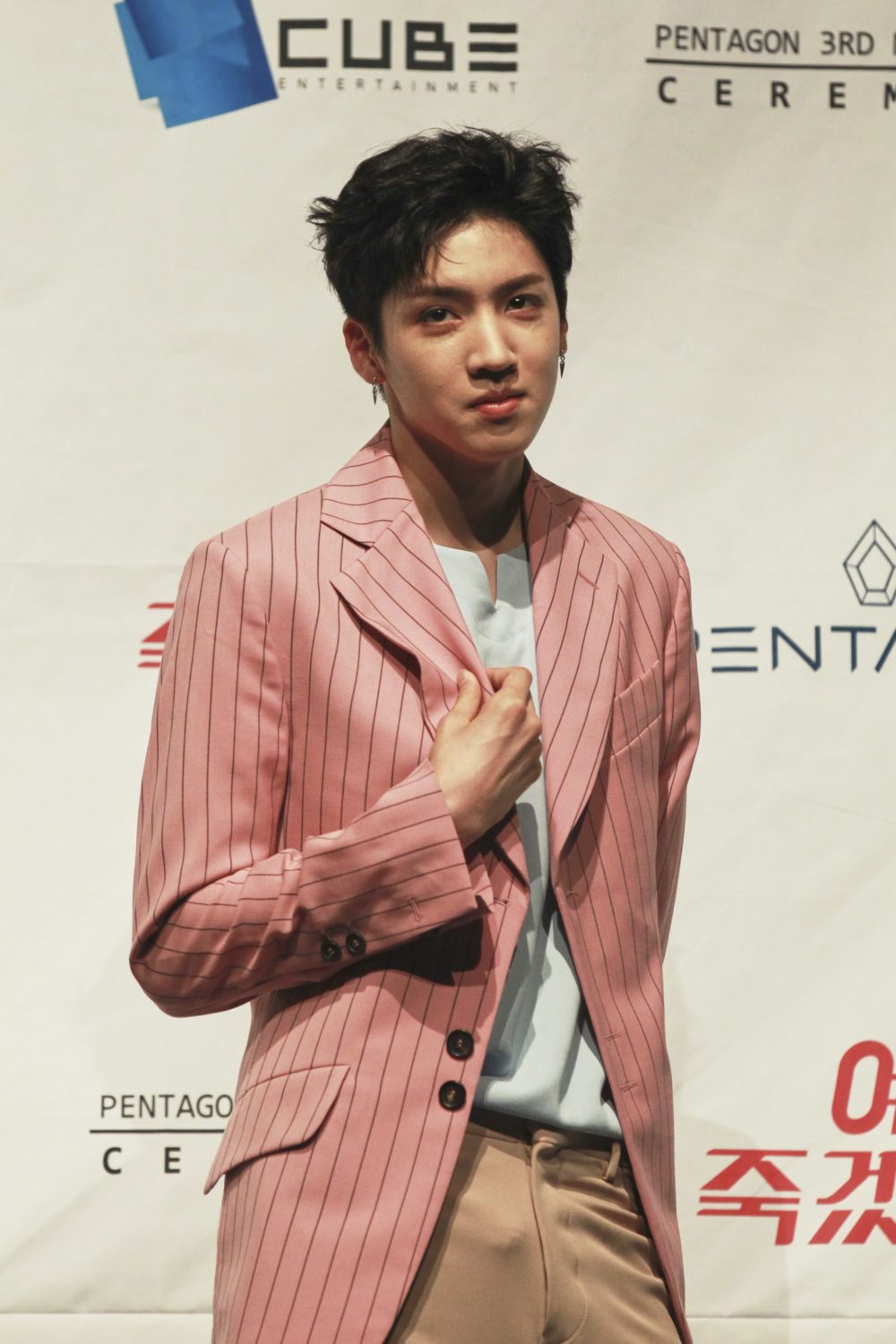 PENTAGON
Soompi Spotlight
How does this article make you feel?