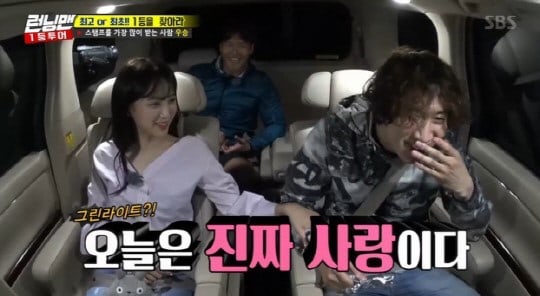 The episode of SBS’s “Running Man” that aired on June 18 had the members competing in a “First Place Tour” with a guest appearance by actress Jung Hye Sung.

While Jung Hye Sung, Lee Kwang Soo, and Kim Jong Kook were in the car together, the topic of relationships came up and Lee Kwang Soo asked Jung Hye Sung whether she had a boyfriend. She replied, “I don’t. It hasn’t been that long since ‘We Got Married‘ ended.” Up till recently, the actress had been in a virtual marriage with actor Gong Myung in the MBC variety show.

She in turn asked Kim Jong Kook if he had a girlfriend, and when he said he didn’t, Jung Hye Sung looked confused as to how that could be. Lee Kwang Soo seemed to get jealous and said, “Why aren’t you asking me if I’m in a relationship?” 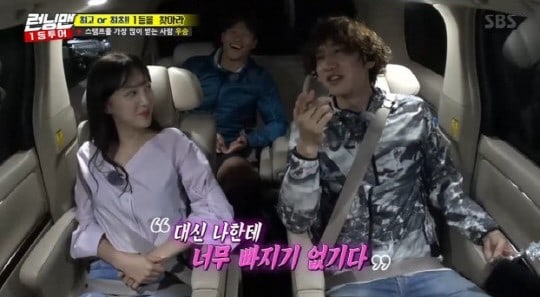 To this, Jung Hye Sung replied, “I already know you’re very popular,” and she even confessed, “I like guys like you. Guys who are thin and tall, who make me feel protective.” Lee Kwang Soo tried to reign in his delight as he said, “But remember, don’t fall too far for me. We should get to know each other slowly.” 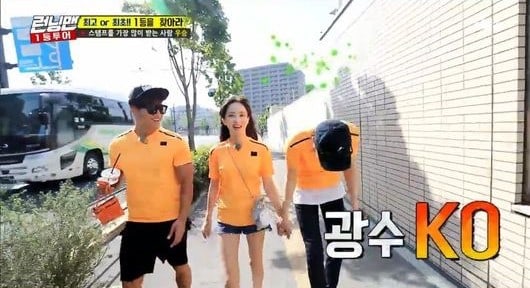 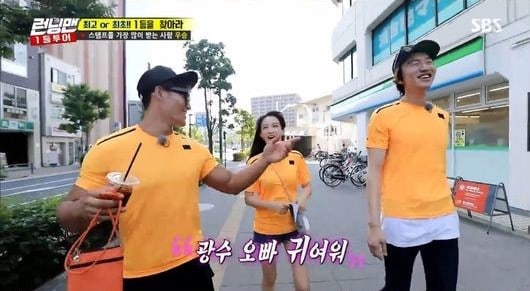 Jung Hye Sung’s affection for Lee Kwang Soo didn’t end there. Throughout the episode, the actress expressed delight in spending more time with her teammate, holding his hand, hugging him from behind, and telling him he’s adorable. Lee Kwang Soo seemed happily surprised by the attention he was getting, and seemed to not know what to do.