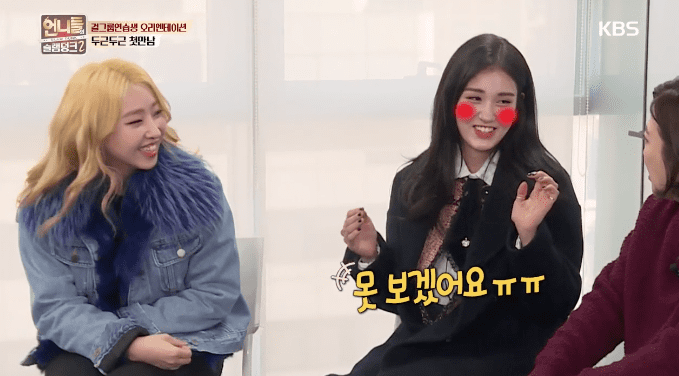 We like to think that idols are just as charismatic off stage as they are on it, but the truth is, idols are just as awkward as we are! They’re even more awkward next to their favorite celebrities. In no particular order, here are eight times K-pop idols were completely starstruck upon finally interacting with their inspirations and ideal types.

Could you imagine joining a girl group with the very artist who first inspired you to pursue music? All of the stars definitely aligned for Somi when role model Gong Minzy joined the cast of “Sister’s Slam Dunk 2.” In fact, Somi was so starstruck by Minzy she couldn’t even turn to look at her.

Through filming for the show, Somi’s fan admiration quickly transitioned into a strong friendship with the veteran singer. The two became close friends, and Gong Minzy documents their friendship in several selfies on her Instagram account.

As one of BIGBANG member Taeyang’s biggest fans, there was no way IU could control her inner fangirl when she finally got the chance to speak to him over the phone during this 2010 episode of “Heroes.”

But no one could prepare IU for when Taeyang actually stepped onto the set and complimented her music. IU was a complete ball of nerves next to her favorite artist, and she hid behind a fellow cast member the moment he appeared.

IU’s love for Taeyang is a lengthy one, and it’s had some major high moments that would make every Taeyang fan jealous. Like when she kissed Taeyang on the cheek during a performance of “I Need a Girl,” sang a duet with him at his solo concert, and even got an impromptu hug from Taeyang during an episode of “Inkigayo.”

IU’s not the only Taeyang fan, though. Ailee is a huge fan of him as well. During her 2014 guest appearance on “Yoo Hee Yeol’s Sketchbook,” the powerhouse singer even covered Taeyang’s “This Ain’t it” and shyly revealed her desire to obtain a signed album from the BIGBANG artist. But Yoo Hee Yeol surprised Ailee with more than just an autographed album – she also got an actual phone conversation with Taeyang himself.

Listen to Ailee’s full conversation with Taeyang below.

There’s nothing like witnessing your role model perform right in front of you – even when that role model is wearing a mask and is dressed in disguise. Once he heard singer Kim Yeon Woo’s voice, B1A4’s Sandeul was instantly overcome with emotions.

Luckily, Kim Yeon Woo made all of Sandeul’s dreams come true when the two joined on stage for a special duet in this clip from “King of Masked Singer” below.

INFINITE’s Sungyeol has been extremely vocal about his love for Girls’ Generation’s Taeyeon. He named her as his ideal type and number one girl group member in this episode of “High Society,” and even told the MC he would easily accept Taeyeon’s request for a date if she ever asked.

So, when Taeyeon teamed up with fellow Girls’ Generation member Seohyun to send Sungyeol a personal video message of support on “Law of the Jungle,” Sungyeol couldn’t stop blushing.

Sungyeol turning into a complete fanboy when Taeyeon finally noticed him is definitely all of us when it comes to our faves, and it was even more adorable seeing how hard he smiled throughout the whole thing.

All about fulfilling the cast’s future and forgotten dreams, “Sister’s Slam Dunk” provided the perfect opportunity for rapper Jessi to finally meet her dream husband and ideal type actor Ha Jung Woo. Just hearing his voice alone had Jessi hardcore blushing in this clip below.

Though the two never got the chance to formally meet in person through the show, Jessi did meet up with Ha Jung Woo later on – sharing this sweet photo of their first encounter on her Instagram.

After naming athlete Song Ga Yeon as his ideal girl on “Roommate,” GOT7’s Jackson was so flustered to meet her face-to-face that he immediately ran away.

Even when fellow roommate and actor Seo Kang Joon chased him around the house, it took multiple tries just to get Jackson to look at Song Ga Yeon. Watch Seo Kang Joon and g.o.d’s Park Joon Hyung attempt to calm Jackson down.

Leaving your hotel to embark on a full day of fun is always an exciting feeling, but it’s even more thrilling when you happen to run into a legendary artist on your way out. KARD’s BM was automatically starstruck when he surprisingly met pioneer Korean hip hop artist Tiger JK during filming for “Secret KARD.”

Check out their full encounter in this clip from their show.

Hey Soompiers, how would you react if you met your favorite idol? Let us know in the comments!