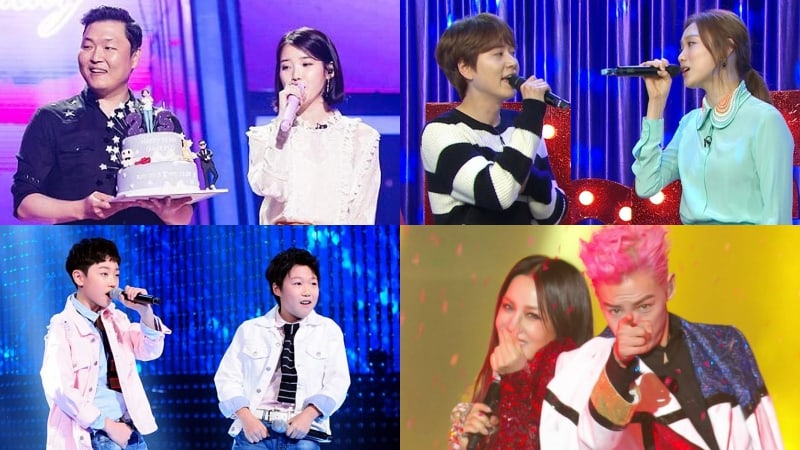 Regardless of differences in age, experience in the industry, and genre, when two talented people perform together, the result is likely to be amazing. Thankfully, there are plenty of Korean variety and music shows that provide opportunities for all sorts of musicians to demonstrate their hidden synergy with each other.

Check out just a few examples of great duet performances!

Two of Korea’s top artists joined forces recently for a legendary episode of “Fantastic Duo 2.” IU joins PSY for an incredible performance of his popular duet track “What Would Have Been,” originally sung with Lena Park.

Watch the latest episode of “Fantastic Duo 2” below!

EXID’s Hani and solo artist Kim Feel put on an impressive duet performance of Panic’s “Snail.” Although Kim Feel had been well-recognized for his vocal skills since “Superstar K6,” many were surprised to find out that Hani was the singer behind the mask with the full, beautiful voice.

This year’s “K-Pop Star Season 6” featured young prodigies Kim Jong Seob and Park Hyun Jin. Both born in 2005, they were put together by the judges on the show and showcased surprising chemistry, causing them to compete together for the entire duration of the program. They eventually won the season. Both signed with YG Entertainment initially, but Park Hyun Jin left shortly after and signed with Starship Entertainment.

Watch the full episode of “K-Pop Star Season 6” below!

Model-turned-actress Lee Sung Kyung has been well-known for her musical talents including piano and singing. For this episode of “Radio Star,” her voice sounds like it’s come straight out of a Disney movie in this duet of “A Whole New World” with Super Junior’s Kyuhyun.

The best episodes of music shows are those with special stages, and this one is a great example. “Music Bank” aired these wonderful duet performances with TWICE’s Jihyo and NCT’s Doyoung singing “All For You,” Lovelyz’s Kei and SEVENTEEN’s DK singing “Greedy,” and Block B’s P.O and U Sung Eun singing “Attractive.”

Watch the latest episode of “Music Bank” below!

SM Entertainment has released many memorable collaborations featuring their artists, and one of the most notable is the “SM the Ballad” project. Girls’ Generation’s Taeyeon and SHINee’s Jonghyun sing the Korean version of “Breath” for this episode of “Music Core.”

Watch the latest episode of “Music Core” below!

Although most episodes of “Immortal Songs” feature covers being performed in front of the original artists, veteran singer Lee Seung Chul sings duets with junior artists for this episode. He collaborates with Apink’s Jung Eun Ji for this new rendition of his track “Destiny.”

“Duet Song Festival” presented the duets of celebrity singers with talented non-celebrity vocalists. EXID’s Solji and her partner Doo Jin Su showcase their outstanding vocals and teamwork in this performance of MC the Max’s “Goodbye for Now.”

Watch the last episode of “Duet Song Festival” below!

The end of the year brings much excitement for the special performances brought by music festivals. In this stage from last year’s SBS Gayo Daejun, Uhm Jung Hwa and BIGBANG’s T.O.P come together for the first time in years for a performance of their 2008 hit track “D.I.S.C.O.”

Also check out these programs to see more awesome performances from your favorite idols!

What are some of your favorite duet stages? Let us know in the comments below!