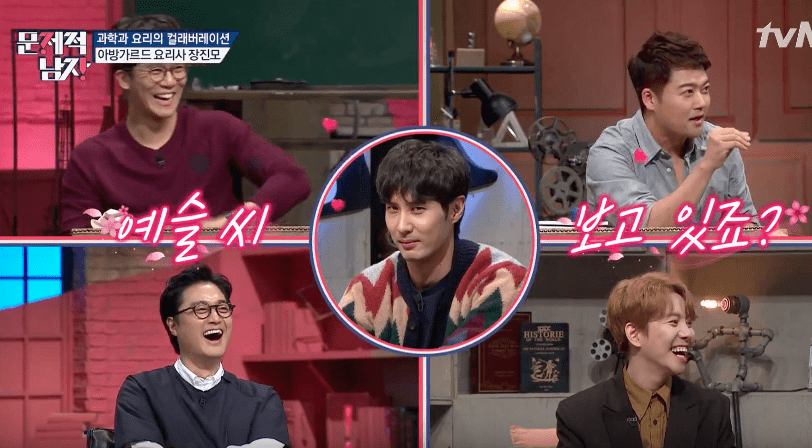 The guest for this episode was chef Jang Jin Mo, who is in charge of cooking in SBS’s drama “Degree of Love.” Kim Ji Suk started to become nervous as the questions were being directed towards the chef because “Degree of Love” and “20th Century Boy and Girl” are rival dramas that air at the same time.

During the episode, host Jun Hyun Moo showed admiration for Kim Ji Suk’s acting, saying, “You’re really cool in your drama. I never knew you were that kind of person.” To that, Kim Ji Suk answered, “The side of me that you see in the drama is the real me. Right now, I’m acting on this show.” 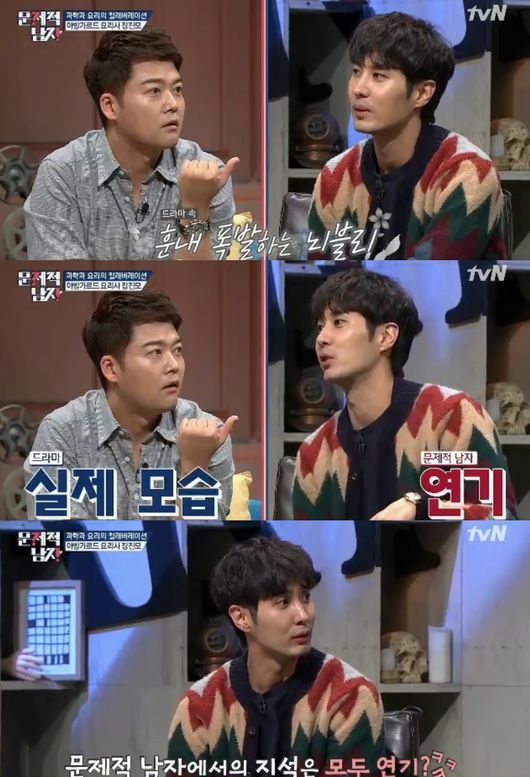 The conversation went right back to Jang Jin Mo, and this time, they talked about the actresses they work with. Jang Jin Mo praised both Seo Hyun Jin and Jo Bo Ah, but when Jun Hyun Moo made him pick his ideal type, he chose Seo Hyun Jin.

The question of ideal types was directed towards Kim Ji Suk who chose Han Ye Seul without any hesitation. When Jun Hyun Moo playfully threatened him that a report about his response would be published, he said, “Of course [my ideal type] is Han Ye Seul.”

Jun Hyun Moo also asked Block B’s Park Kyung about his ideal type. When Park Kyung answered Han Ye Seul, Kim Ji Suk complained, “Why are you [picking] Han Ye Seul? You can’t!” To that, Park Kyung laughed and asked, “Why not?” to which Kim Ji Suk replied, “You have to pick between Seo Hyun Jin and Jo Bo Ah.” His defensive reply made everyone laugh and the viewers could tell how much affection he has towards his beautiful co-star.