On the May 20 episode of SBS’s “Running Man,” the cast met their doppelgangers as part of a mission planned by HaHa.

After HaHa won the show’s second contest to conceive and direct the content rating notice clip that airs at the beginning of each episode, the cast gathered at an amusement park to act out his idea for the clip. HaHa, dressed up in a suit, announced that his theme was doppelgangers. Each cast member would be paired up with a look-alike for a series of games, and the results would determine the order in which the pairs got to choose their costumes for the content rating notice clip.

HaHa’s doppelganger was his mother, who showed off her wits and a great sense of humor as his co-host for the day. Meanwhile, announcer Jo Woo Jong appeared as Ji Suk Jin’s look-alike. Jo Woo Jong even wore the same clothes as Ji Suk Jin, boasting an impressive resemblance. “I’ve consistently heard people say that I look like Ji Suk Jin since I debuted as an announcer,” he said. “I’ll be Park Shin Yang‘s look-alike if I improve a bit more.”

When actor Seo Ji Suk appeared as Yoo Jae Suk’s doppelganger, the other members protested that they weren’t similar at all. When Seo Ji Suk tried on Yoo Jae Suk’s glasses, however, the members finally acknowledged the resemblance. 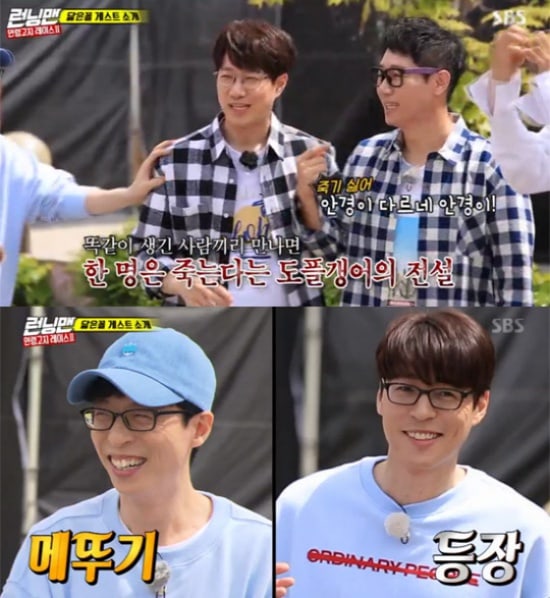 Kim Jong Kook’s look-alike was singer K.Will, who commented jokingly, “This is my first appearance on ‘Running Man.’ I really wanted to be on the show, but not like this.” Yoo Jae Suk added that Kim Jong Kook, K.Will, and BIGBANG’s Daesung all shared the same facial features. He joked, “When Daesung is discharged, we could have a ‘Three Brothers’ special.”

Song Ji Hyo and her brother Cheon Seong Moon were then paired as doppelgangers. They had previously shown off their great chemistry on “Running Man,” and this episode was no exception. As usual, the two siblings worked together perfectly. 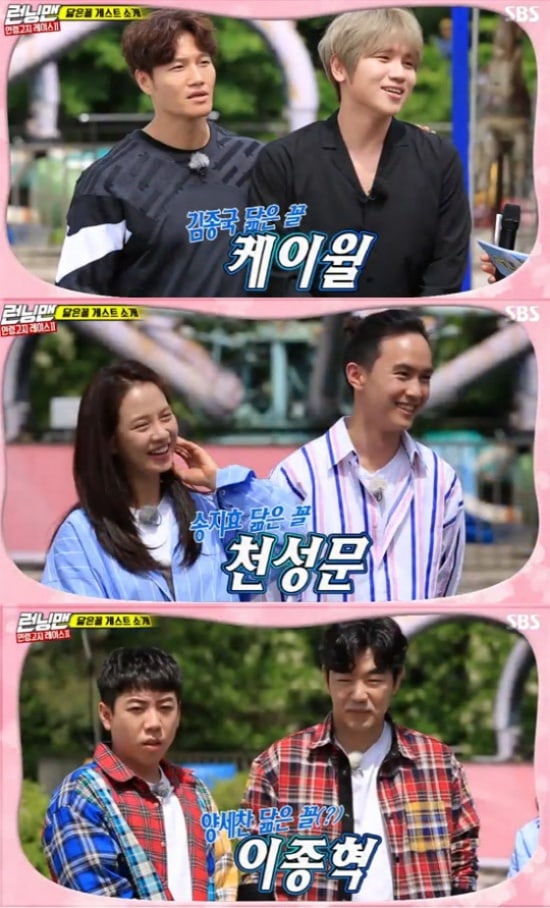 Jun So Min’s look-alike was comedian Han Min Kwan. Jun So Min shared that when you search her name online, Han Min Kwan pops up as a related term. She explained, “I was thin during ‘Princess Aurora’ because I weighed 10 kilograms less than I do now. I resembled him even more back then.” Han Min Kwan joked, “I was once called ‘Prince Aurora,’ too.”

Former professional basketball player Han Ki Bum, who has often been mentioned as Lee Kwang Soo’s look-alike on “Running Man” over the past five years, finally appeared as his doppelganger. When Han Ki Bum stepped out, Lee Kwang Soo suddenly became incredibly shy. “Actually, I grew up hearing that I look like Han Ki Bum since I was in elementary school,” he said. “I’m really nervous to meet him in person.”

The production staff quickly drew a mustache on Lee Kwang Soo’s face for a closer resemblance. As the episode progressed, the other cast members noted that Han Ki Bum even resembled Lee Kwang Soo in terms of personality, making everyone on set laugh. 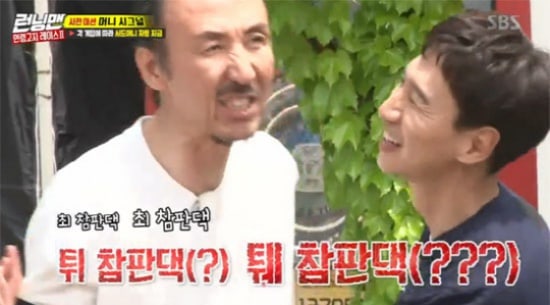 Later on, during the “Survey Game,” Yoo Jae Suk asked Song Ji Hyo’s brother whether Song Ji Hyo had occasionally had boyfriends in the past. He immediately replied, “Yes.” Song Ji Hyo responded by calling for a time-out and hilariously cursing at him as she told him to stop talking.

Yoo Jae Suk then asked Kim Jong Kook, “What do you give as a gift to someone you love?” Kim Jong Kook answered, “I usually write letters.” Yoo Jae Suk joked, “Are they chain letters?” to which Kim Jong Kook retorted, “Do you want to receive one?” 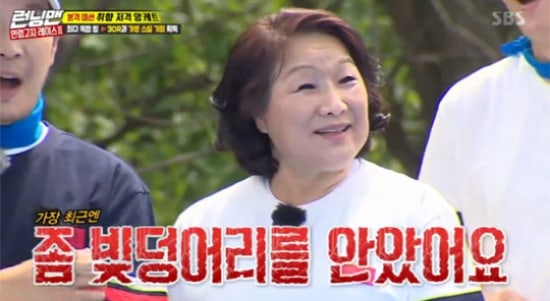 At the end of the day, HaHa and his mother won first place in the games. They were given the opportunity to choose their costumes first, and HaHa won the right to stand in the center during the show’s opening for the following four weeks.

The other teams all dressed up according to various themes ranging from the Joker to animated frog characters. Lee Kwang Soo and Han Ki Bum, who had lost the final game of rock-paper-scissors, had no choice and were forced to wear the last costumes remaining. Both towering at 190 and 205 centimeters respectively, they dressed up in white spandex tights, making everyone burst out laughing. 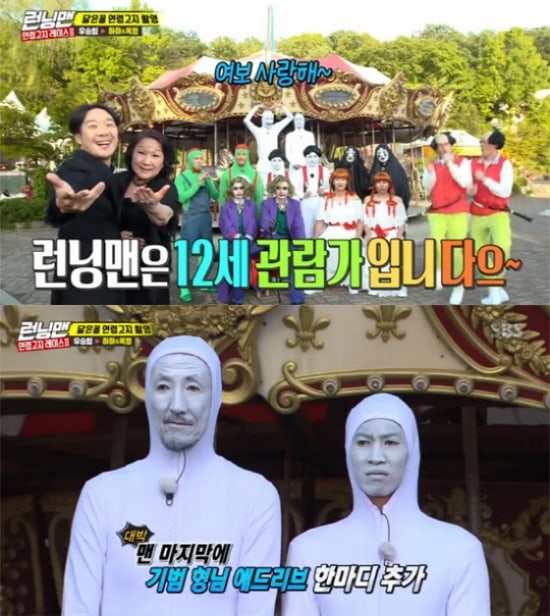