The cast of SBS’s “Running Man” faced ironically contrasting weather conditions on the latest episode of the variety show!

However, things took an unexpected turn for the “Luxury Package” group on their second day in Switzerland. HaHa, Yang Se Chan, Kim Jong Kook, and Hong Jin Young were scheduled to go heli-skiing—a luxurious form of skiing in which the skiers reach the top of their trail by helicopter—but once HaHa and Yang Se Chan had taken off for their destination, the sky turned an ominous, cloudy grey.

Shortly after Kim Jong Kook and Hong Jin Young took off to join them, a severe thunderstorm hit the area, and their helicopter was forced to make a U-turn and head back to home base. While Kim Jong Kook and Hong Jin Young were able to make it back before the storm reached its peak, HaHa and Yang Se Chan were left stranded at the top of a mountain as heavy rain and lightning crashed down around them. 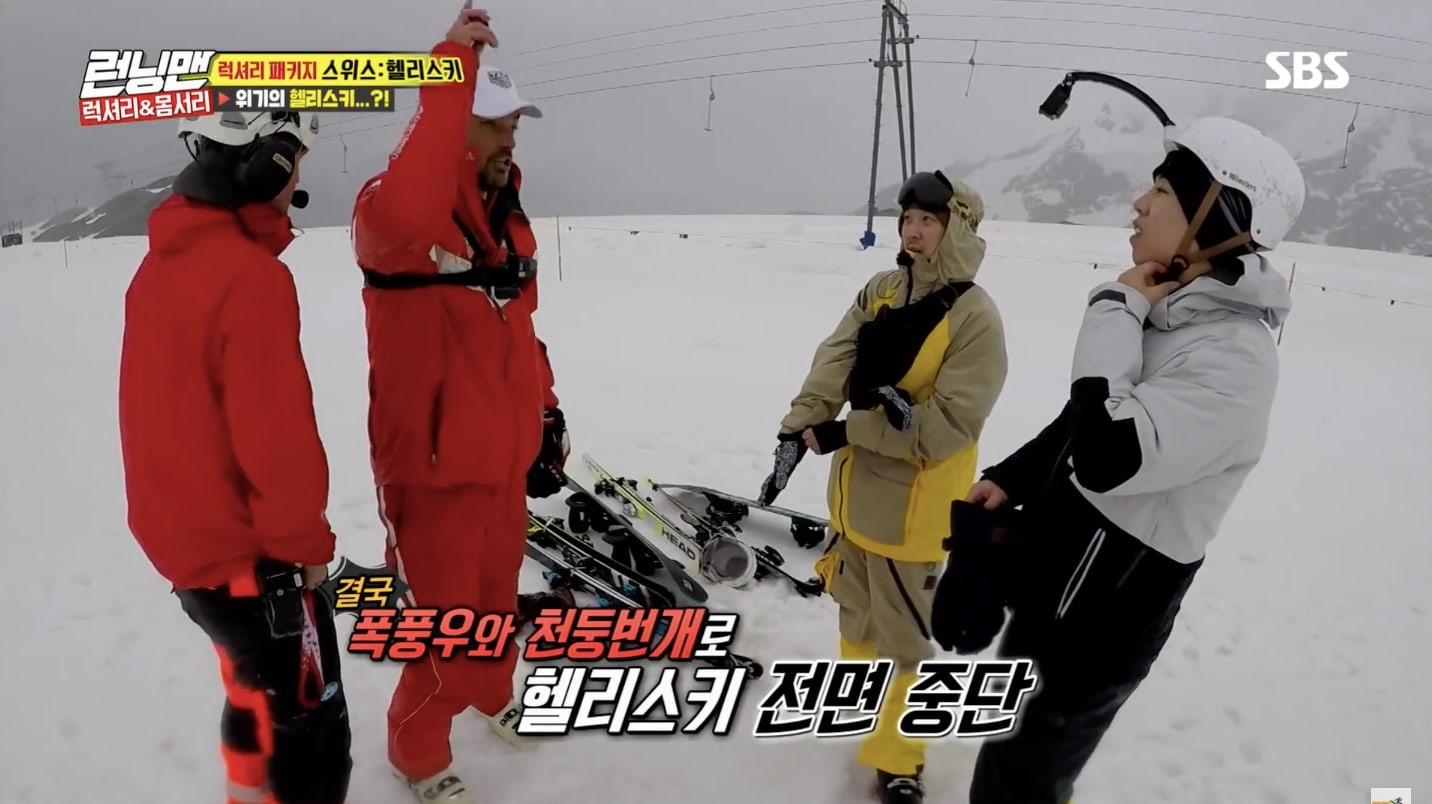 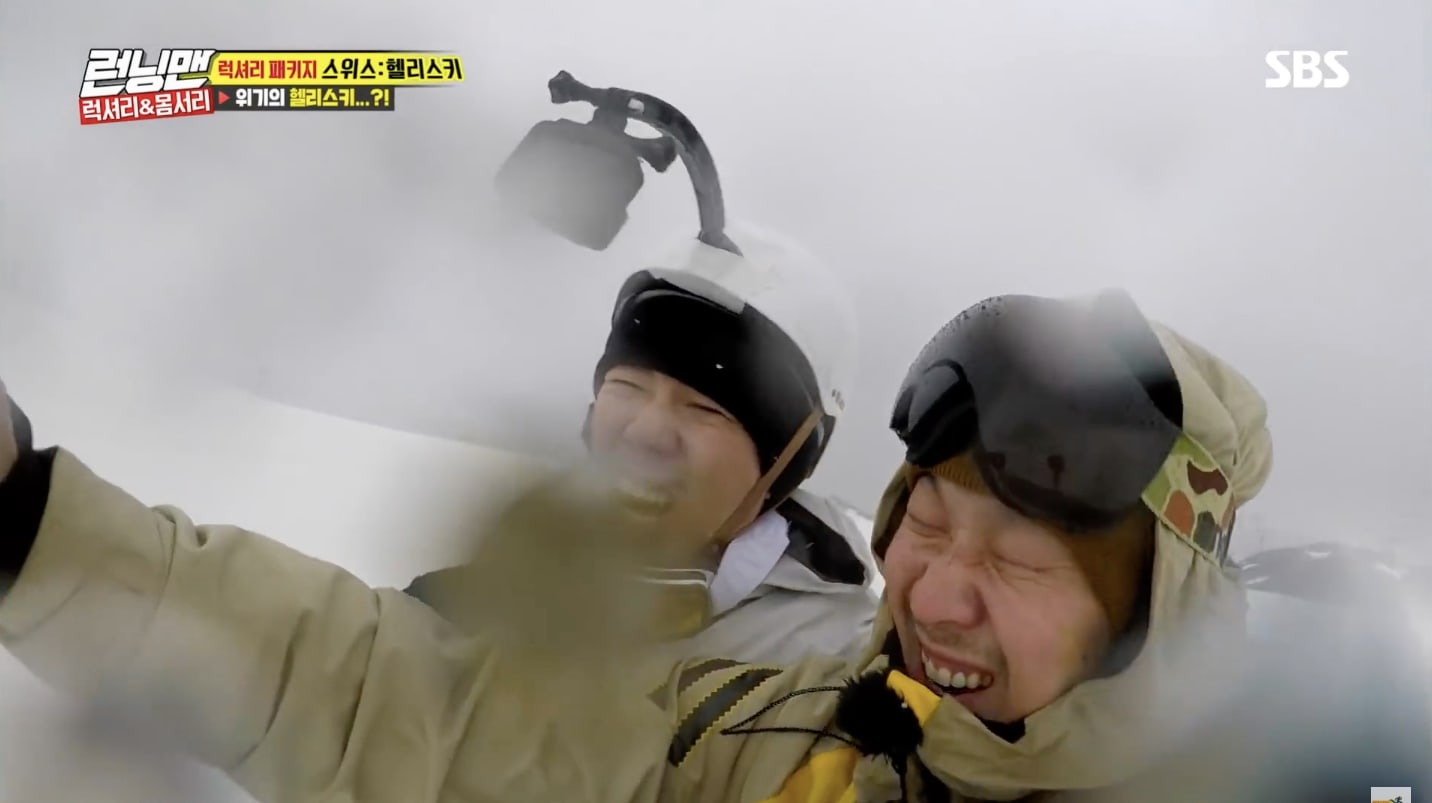 Disappointed to hear that conditions were too dangerous to go heli-skiing, HaHa jokingly referred to the fact that he and Yang Se Chan are two of the most notoriously unlucky members on “Running Man.” He turned to the camera and laughed, “Is this because it’s us? This is what our lives are like.”

Besieged by hail and far from enjoying any kind of “luxury,” the two crouched down on the snowy ground at the instruction of their guide, attempting to remain in the safest position possible as they waited to be rescued. After a long time, a rescue team finally arrived by helicopter to escort them to safety.

Meanwhile, the unlucky “Shuddering Package” group faced beautiful, sunny weather conditions despite being in England, a country known for its frequent rain and ever-present clouds. When the production staff informed them of the “Luxury Package” group’s ordeal, they expressed dismay that their wing walking hadn’t also been canceled due to weather conditions. 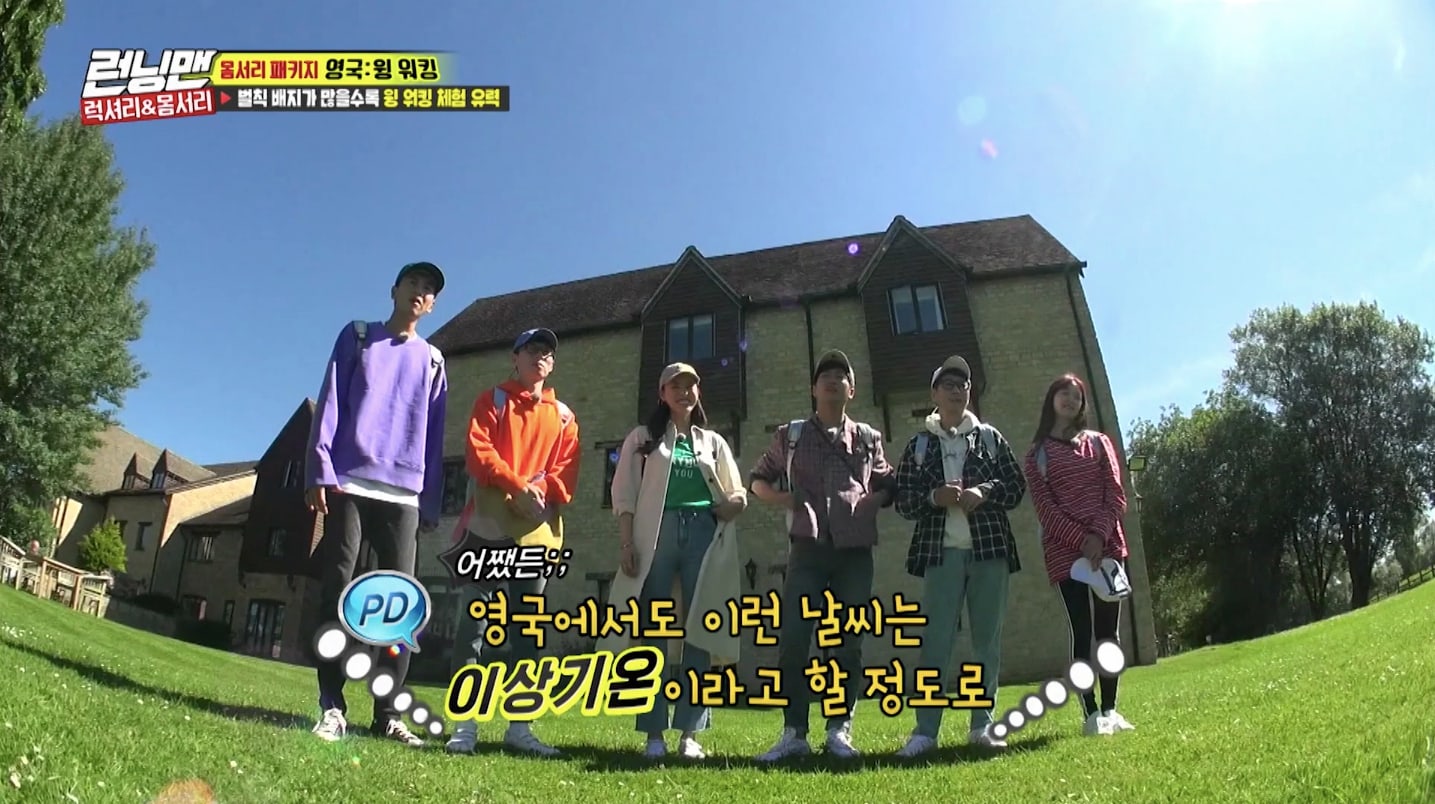 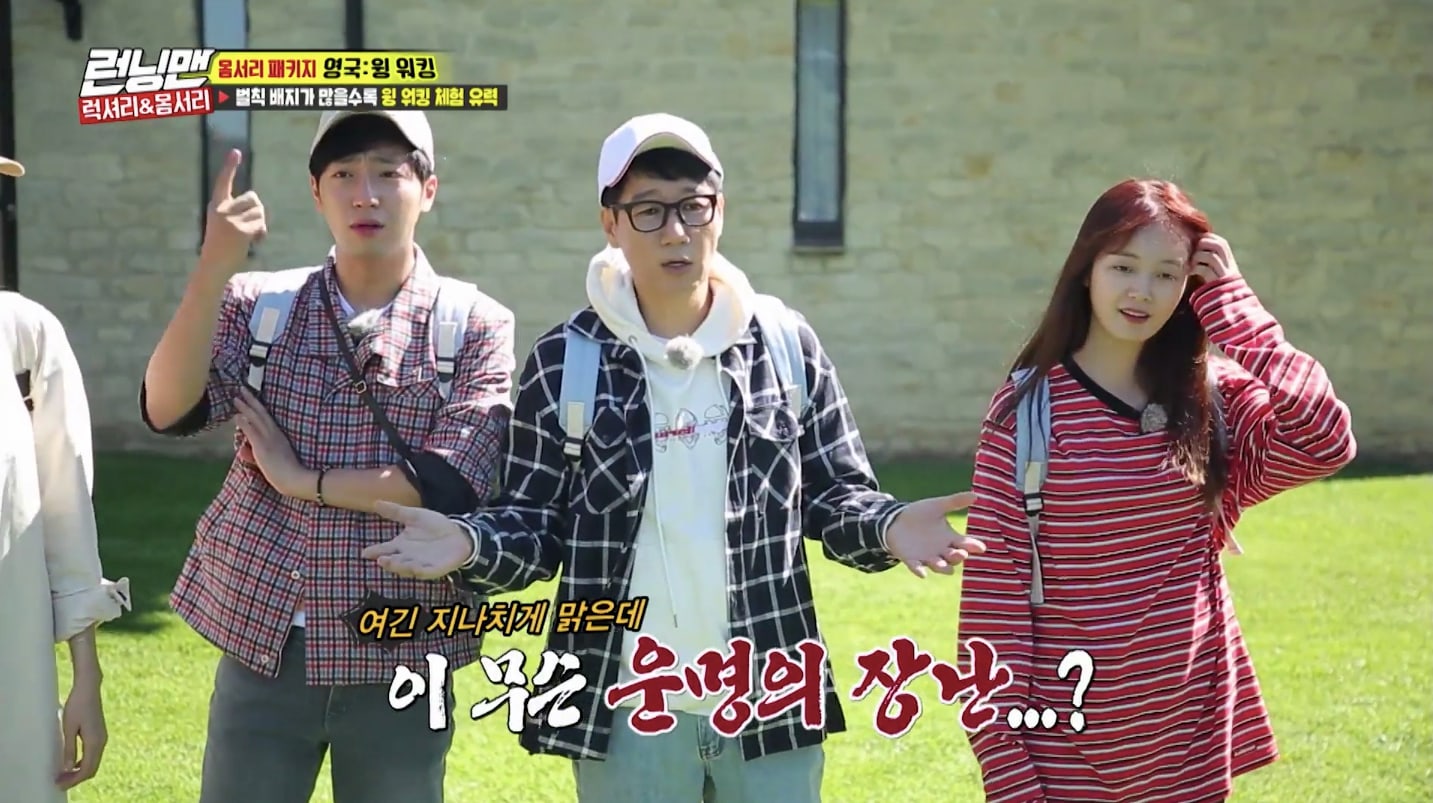 Yoo Jae Suk exclaimed, “Shouldn’t the weather have been switched?” Lee Kwang Soo complained, “Isn’t Switzerland known for its good weather? And it rains so often in England.”

The producing director (PD) replied, “The Switzerland team was unluckily unable to experience [heli-skiing], but fortunately, we have the good luck of being able to go through with [wing walking].” The members protested vehemently, with Lee Kwang Soo remarking, “Are we really the lucky ones?”

The PD went on, “Today is such a beautiful, fair day that they say that this is unusual weather for England. It’s the ideal weather for wing walking.” Jun So Min laughed, “Incredible. I can’t believe this,” and Ji Suk Jin added, “They said that it was always raining in England, so I even planned to wear a raincoat.” 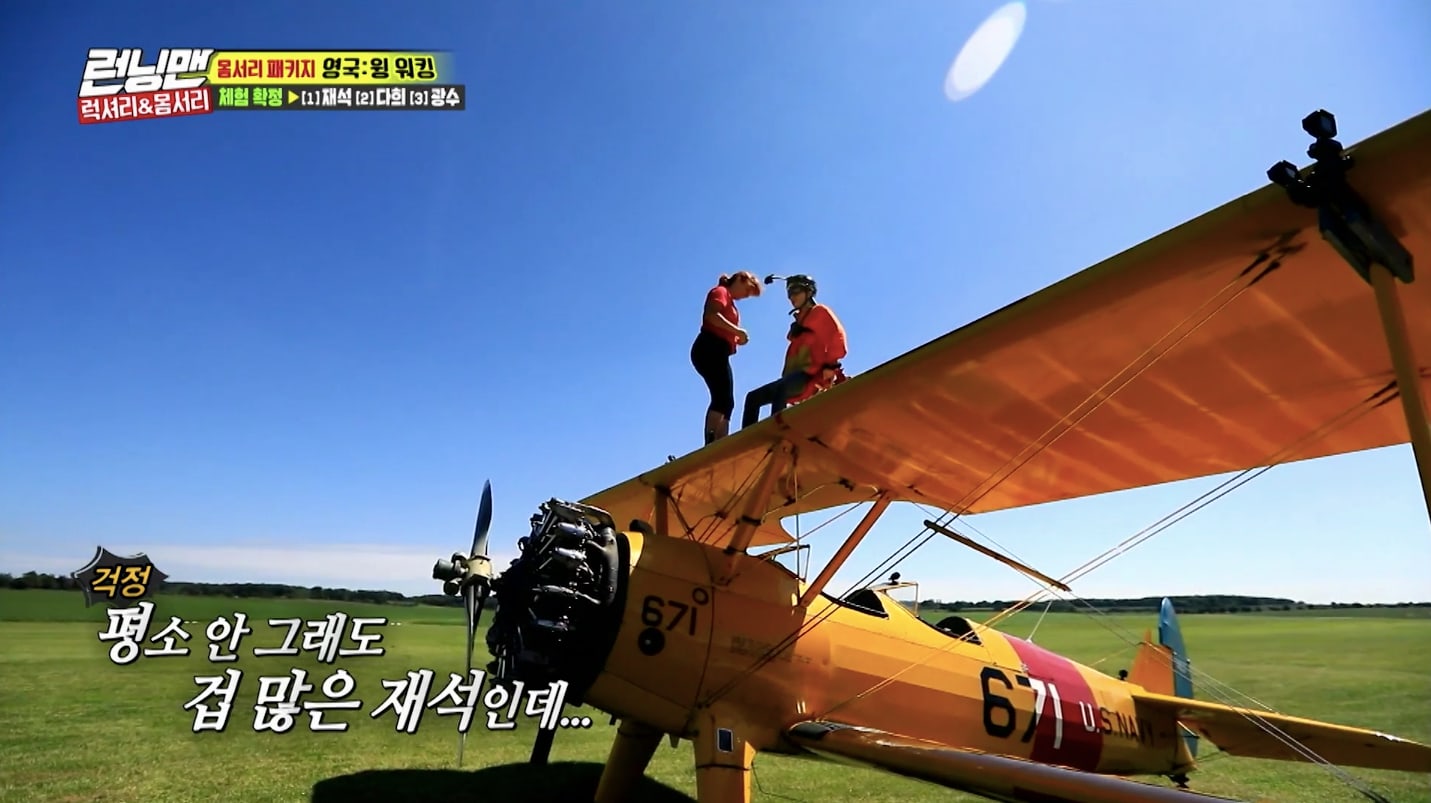