On the July 8 episode of the show, Lee Da Hee and Lee Kwang Soo experienced the more advanced levels of wing walking that included twists and vertical drops.

As the first person to experience wing walking, Yoo Jae Suk called himself the “expedition leader” and gave some advice to the other two members. When Lee Da Hee started wiping her goggles, Yoo Jae Suk said, “There’s no need to do that,” referring to the fact that he had kept his eyes closed throughout his entire flight. Lee Da Hee asked in confusion, “Why? I have to be able to see,” and Yoo Jae Suk replied, “Oh… I guess that’s true for you. I liked it better when [my goggles] fogged up.”

Although she was taking on a more intense level of wing walking, Lee Da Hee’s attitude was completely different from Yoo Jae Suk’s. While his preparation time took much longer than his actual time in the air, Lee Da Hee quickly got on the plane without any hesitation.

She then wowed everyone by calmly putting on lip balm as the plane prepared to take off and even dangling her legs in the air mid-flight. Yoo Jae Suk, who had been far less serene during his own flight, commented, “If Da Hee acts like that, what does that make me?” When it was time for the plane to do a twist, Lee Da Hee was surprised, but still maintained her impressive composure. 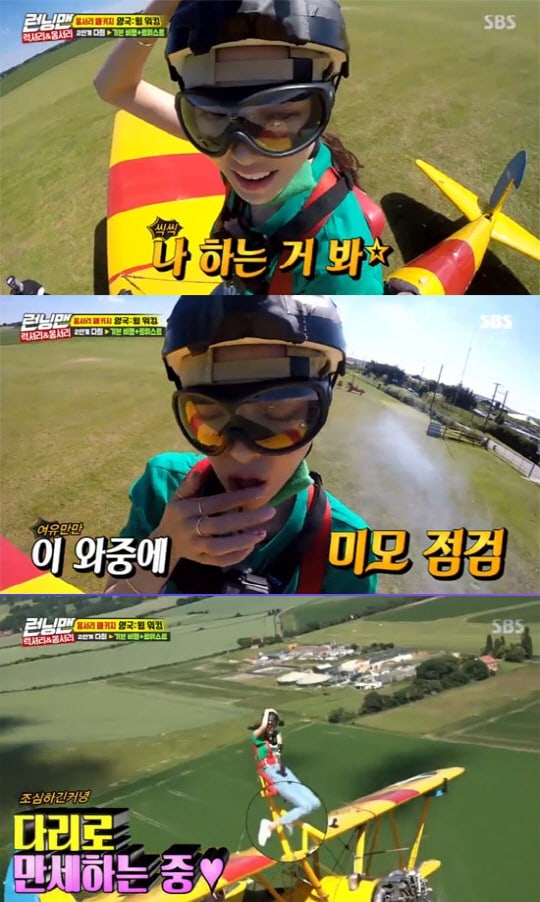 The members praised her bravery and compared her favorably to Yoo Jae Suk. Once she returned to land, Lee Da Hee said, “The twist was scary, but I think it must have been really nice for Yoo Jae Suk to just experience the first level.”

The last person to go was Lee Kwang Soo. Yoo Jae Suk teased him by singing him a song with the lyrics, “You were born to receive a punishment.” Ji Suk Jin made Lee Kwang Soo laugh and spit out his water when he misspoke and said, “Kwang Soo, you’re the high rice [instead of ‘highlight’] of today.”

When Lee Kwang Soo climbed on top of the plane, he nervously said, “The chair is too small,” before attemping to calm himself by repeating, “This is a dream. I’m dreaming.” He then took out the calming herbal medicine that Lee Sang Yeob had given him earlier and put it in his mouth right before the plane suddenly took off.

After experiencing 10 minutes of rapid vertical drops and twists, Lee Kwang Soo finally returned to land. One of the employees saw Lee Kwang Soo’s face covered in residue from the calming medicine and asked for a tissue to wipe his face.

Once the other cast members saw his face, they joked, “Is that poop? Did you vomit? How can you poop with your mouth?” Lee Kwang Soo explained, “The plane took off before I could swallow [the medicine]. It was so, so, so, so scary. The calming medicine even came out of my eyes! Really!” 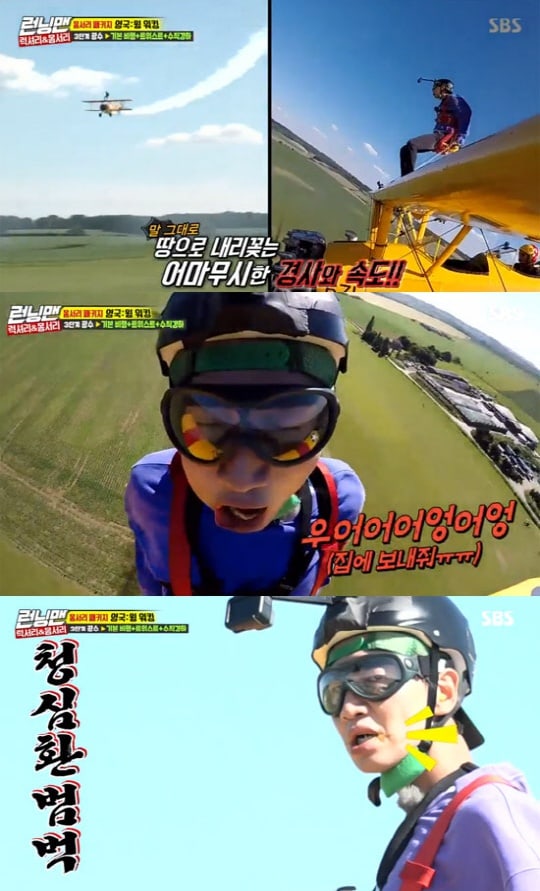