2PM’s Nichkhun, Junho, And Chansung Share Memories From Their 10 Years Together

On September 21, 2PM’s Nichkhun, Junho, and Chansung looked back on their 10 years together during a LieV broadcast on Naver’s V Live.

The members first updated fans on what they’ve been up to. Nichkhun began, “These days, I’m preparing for my solo concert. Today, I finished recording a song. Since it’s my first solo concert, I’m participating in writing the songs and lyrics for the fans.”

Junho said, “It’s been almost two months since my drama [‘Wok of Love‘] ended. I also recently completed my summer Japan tour, so I’m taking some time off to recharge. I always felt pressured to do something every day, but now, I’m trying not to feel impatient even if I don’t do anything.”

Chansung added, “I just began filming a drama [‘So I Married an Anti-Fan’] and started a musical that will begin in October. I’m also appearing in a variety show and attending school.”

2PM debuted in 2008 and celebrated their 10th debut anniversary on September 4, 2018. On their 10 years together, Nichkhun commented, “When we began, we were in our 20s and now we’re already in our 30s. It’s shocking. I didn’t know this day would come.” Chansung said, “Seeing where we are today, we did a good job.”

Five 2PM members recently renewed their contracts with JYP Entertainment, and while Taecyeon signed with 51K, he reassured fans that he will continue to promote with 2PM.

Junho commented about this, “I’m happy and grateful that the six of us are tight-knit. I remember when the six of us lived in the dorms together. Nichkhun called me a lot telling me not to sing and not to play the drums.” Nichkhun explained, “You’re not supposed to sing late at night.”

Junho continued, “I think it’s now starting to feel like it’s been 10 years since we debuted.” Chansung added, “I’ve become a lot more experienced and have more knowledge now. When I feel like I gained this kind of knowledge, it really feels like it’s been 10 years. Now, no matter where we go, we’re not the youngest group. That’s when I realize that we’ve been promoting for a while. We now even have managers who are younger than us.”

“I think I’ve become more relaxed on stage,” explained Nichkhun. “Instead of just singing and doing the choreography that I practiced, I’m enjoying it. Seeing the happy fans, I think, ‘I’m doing a good job.’ I like that I’m able to relax like this.” 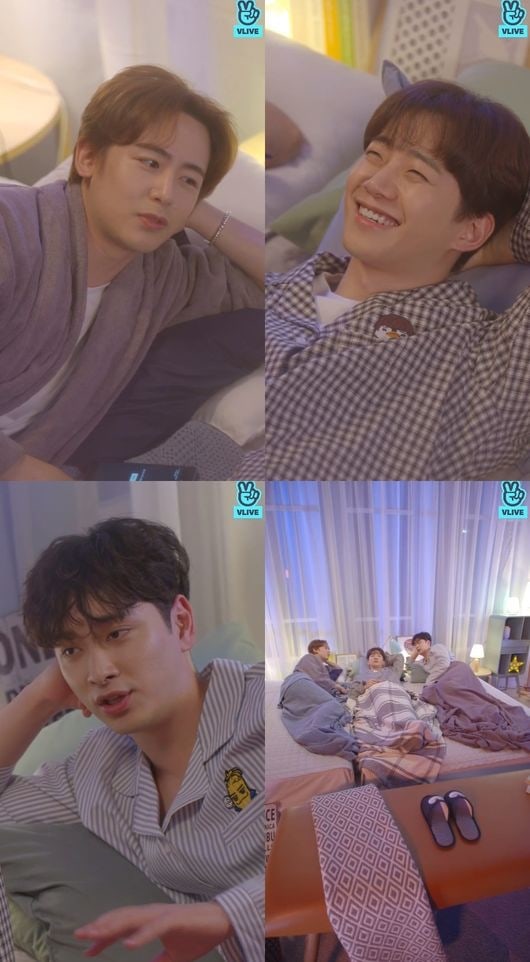 Nichkhun, Junho, and Chansung were some of the final members who stayed together in the dorms. Reflecting on their time as housemates, Chansung said, “Jun.K usually recorded in his room. It wasn’t a dorm, but basically a studio.” Junho added, “It shows how passionate we were about music.”

Chansung continued, “I just remember all of our stuff. Each person had so much stuff that at one point, there was only a path where we could walk through the dorm.” Nichkhun added, “There was a lot of stuff, but there were also so many shoes.”

Chansung added while shaking his head, “I lived in the living room and you guys stacked the shoes there.” Junho commented, “I recently saw a photo from 10 years ago and it was amazing. Nichkhun was playing toy golf there.”

Chansung replied, “Looking back at it now, there are so many stories. We changed a lot in 10 years.”

When asked to share a regretful memory, Junho replied, “I regret trying too hard. Whenever I appeared on variety shows, I’d get edited out, so there was a time when I felt down and didn’t want to appear on variety shows.” Nichkhun added, “I wish I had started making music earlier. If I worked hard back then, I could make songs more quickly now.”

The members also listened to some of their popular hits with their fans, such as their debut track “10 Out of 10,” “Heartbeat,” and their fan song “Thank You.”

Sharing his hopes for the future, Nichkhun stated, “The six of us have never gone on a trip with just us. I want us to go somewhere even if it’s nearby.” Junho agreed by saying, “We’ve been so busy. I really hope that we can go even if it’s somewhere close. I especially want to bungee jump with the members.”

2PM
Chansung
Lee Junho
Nichkhun
How does this article make you feel?