On November 8, the actor appeared as a guest on tvN’s “Life Bar.”

He began, “I went to a lot of auditions. I think I went to over 100 auditions. Before ‘Reply 1994,’ I had been working for about 10 years and went to so many auditions during that time.”

Shinhwa’s Kim Dong Wan and MC Shin Dong Yup brought up the scene where Yoo Yeon Seok walked on the beach with Kim Min Jung on his back.

When the MC asked if it was difficult, Yoo Yeon Seok replied, “Sand is difficult to walk on just by yourself, but on top of that, it was an emotional scene and a scene where Kim Min Jung was dying. So, I think it was a difficult scene for many reasons. It was more difficult emotionally than physically.” 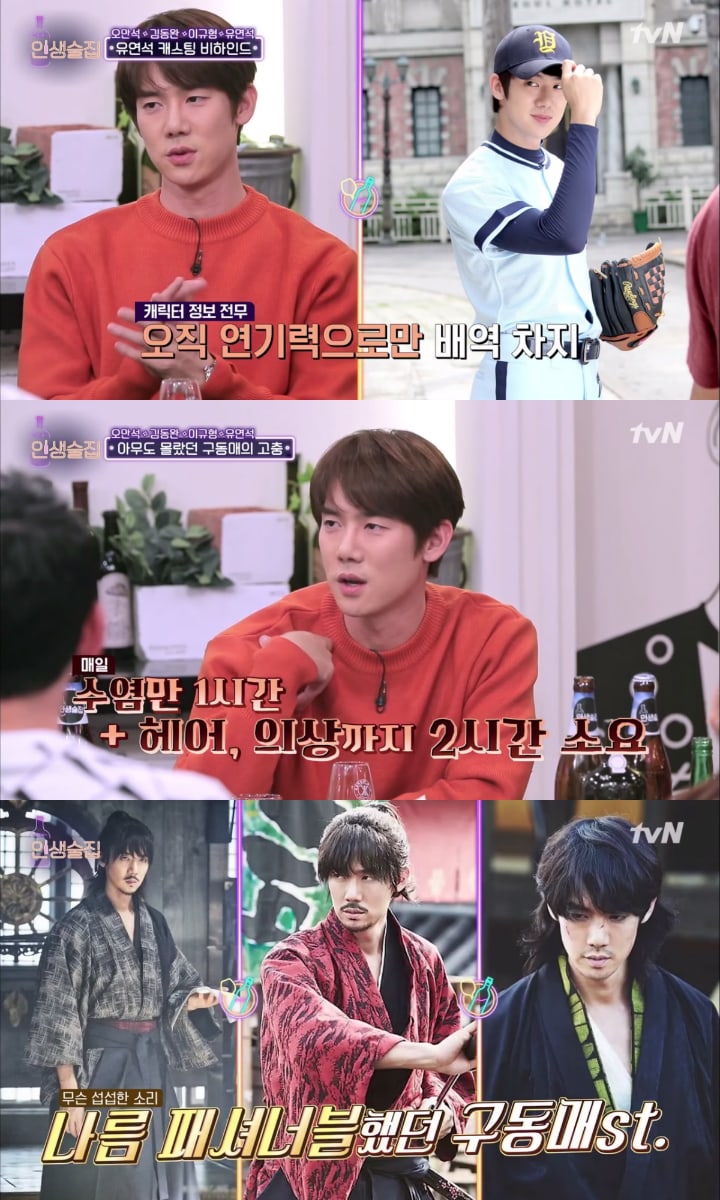 About his hair makeup for “Mr. Sunshine,” Yoo Yeon Seok explained, “At first, I put on [a beard] that was customized for my face. But I had so many close-up shots, that we ended up gluing on each piece of hair.”

When Super Junior’s Kim Heechul asked if the makeup process was easier if he grew out some of his own beard, the actor replied, “But if you grow out too much, then the glue won’t stick. I just had to grow a little bit of hair. We filmed for about 10 months.”

He continued, “From [the mustache and beard] to hair and putting on the outfits, it took about two hours every day. My past project was ‘Hedwig and the Angry Inch’ so my skin was pale. While I was doing ‘Hedwig and the Angry Inch,’ I was fitted for costumes and underwent makeup tests [for ‘Mr. Sunshine’]. But instead of a samurai, I looked a little bit like a geisha.”

After making everyone laugh, he added, “So the director and writer suggested that I tan a little and that we put on some darker makeup and a beard. I thought that it would be hard to wear a beard for 10 months, so I tried to think of other ways to express [my character]. But in the end, I looked more masculine after I put it on.”