“The Eternal Love” is 2017 C-drama that blends elements of sci-fi and romance. A modern day Qu Xiao Tan time-travels to an olden day Dong Yue kingdom and inhabits Qu Tan Er’s body (both played by Liang Jie). The two of them switch consciousness without realizing who each other are or how they do it. To make matters more complicated, Tan Er is in love with Mo Yi Huai (Wang Rui Chang), the first prince, but Xiao Tan finds herself falling for the eighth prince, Mo Lian Cheng (Xing Zhao Lin).

Now before we dive in, let’s get real for a moment first. “The Eternal Love” is not a very sophisticated or well polished drama. In fact, it’s got all the signs of a low budget web drama production — green actors, comical CG effects, odd costume designs — but, and this is a big “but,” there’s just something so endearingly addictive about this C-drama. One of the biggest reasons for this surprising hit is definitely due to the sweetness overload between the main leads (and, a pretty awesome OST tracklist too). And really, some times we just need something light and fluffy in our drama schedules, don’t we? 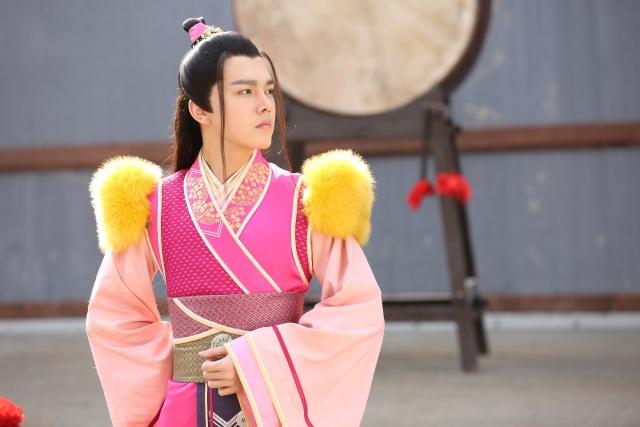 Case in point. What is the 14th prince (Wang Hao Ge) wearing?! XD

So let’s take a trip down memory lane and revisit some of those memorable moments between Mo Lian Cheng and Xiao Tan:

A gentleman always saves a lady when she’s falling off of a wall, ammirite? Nope, at least not our hero, Mo Lian Cheng! Even after Qu Xiao Tan’s many pleas, he doesn’t help her off the tall wall when she finds herself stuck, and even takes a sidestep when she plunges down.

This is also when we first meet Tan Er, the original soul of the body, and it’s a neat way to introduce us to the concept as well as to the two very different souls/personalities.

When Xiao Tan wants to leave Lian Cheng with Zhao Qing Yun (Xin Rui Qi) so she can run off and do her own things, Lian Cheng makes it clear that he would have none of that. And just as we’re busy swooning over his words: “Never ever leave me behind or leave without me,” he leans down and plants a kiss on her! Someone dig out the “well that escalated quickly” meme!

3. When Lian Cheng excels in “putting on a show”

When Lian Cheng sees Qing Yun, who he knows has a crush on him, walking over to him and Xiao Tan, he quickly pulls Xiao Tan onto his lap. Even while answering Qing Yun’s questions, his eyes never leaves Xiao Tan, and his hand is busily stroking her hair. This sufficiently drives Qing Yun away, and us viewers nutty for more!

In an effort to show off Lian Cheng’s amazing archery skills, one of his concubines suggests using Xiao Tan as a target instead. After some hassling from the other concubines and “encouragement” from Lian Cheng, she takes her place in front of the target. Lian Cheng obviously succeeds in making the shot, then cunningly flips the table and has the concubine take Xiao Tan’s place, but this time, with Xiao Tan as the archer. Revenge AND intimacy? Talk about two birds one stone!

5. When Xiao Tan finds herself wooed

Just as Lian Cheng is flirting with Xiao Tan (while she’s taking a bath I might add), he hears sounds and suspects an attack. With a sweep of his arm, he puts out all the candles and wraps her in a robe. Promising that he’ll keep her safe, Xiao Tan realizes just what a hottie he is.

6. When Lian Cheng “stops the rain”

When Xiao Tan finds herself kneeling in the courtyard of Tan Er’s old house completely drenched in the rain, her mind wishes for Lian Cheng to come help her. And arrive he does, and as he takes Xiao Tan away, he also lays down the law with his in-laws (no pun intended) and draws a firm line in the sand. What’s more impressive, is in coming to save Xiao Tan, he may also have missed his opportunity to be named the Crown Prince.

A presence so powerful the downpour immediately stops.

Feeling hurt and hopeless because Lian Cheng doesn’t believe her story about being in Tan Er’s body, she takes a night stroll out in the gardens. Someone grabs the opportunity to try and kill her by pushing her into a large pond, where she nearly drowns. The imperial doctors are unable to save her, claiming that there is no sign of life. But a mysterious man appears, and manages to save her by having Xiao Tan and Lian Cheng bound together in a life and death agreement — meaning as long as one lives, the other will live too, and vice versa. The man is also alarmed to find two consciousnesses in Xiao Tan’s body, which finally convinces Lian Cheng that Xiao Tan was actually telling the truth.

When Lian Cheng’s grandmother (the Empress Dowager) insists he take Qing Yun as his bride, Xiao Tan becomes overtly jealous. But on the night of the wedding ceremony, he leaves Qing Yun sitting there by herself and instead goes to Xiao Tan to have their own personal ceremony, complete with swoon-worthy vows.

9. When Xiao Tan is willing to die for Lian Cheng

After finding out that Lian Cheng was predicted to die at the age of 25, Xiao Tan learns that the Soul Suppressing Orb can save him. The problem however, is that the orb only identifies Xiao Tan as its owner, and she would have to die for it to be passed on to another. Thus Xiao Tan bravely sacrifices herself, as she would do anything for her true love, but is stopped in time by Lian Cheng. He then proceeds to… kiss her fears and worries away.

After the two are transported to the Spirit Land, they have the ultimate battle with the Demon Lord, and manage to defeat him. But in doing so, Xiao Tan had to use a lot of the energy from the Soul Suppressing Orb, and this creates a vortex that sucks Xiao Tan back to her present self and time.

Waking up, she immediately looks for Lian Cheng. Much to the relief of all shippers, he appears before her and they run off into Season 2 together.

Which of your favorite diabetes-inducing moments did we leave out? And fans of the show, what are you thoughts on the recent announcement of a planned Season 3? Discuss in the comments section below!

Belinda_C enjoyed the silliness/cheesiness of this drama after watching more heavier fares. She also relies on Shinhwa/SEVENTEEN for her daily dose of dorkiness! Come obsess over them with her on Twitter!

Currently watching: “Mama Fairy and the Woodcutter”
All-time favorite: “My Fair Princess” (I’ve watched this more times than I can care to admit)
Looking forward to: “Memories of the Alhambra“