BTS’s Jin penned a letter to the group’s fans ARMY on his birthday to express his love and gratitude!

December 4 is Jin’s 26th birthday in Western reckoning, and fans have been celebrating by sharing their love on Twitter. The list of worldwide trending topics was taken over shortly after midnight by hashtags including #OurEpiphanyJin, #HappyJinDay, #ShiningAndPreciousJin, #석진이는_온_세상의_빛 (“Seokjin is the worldwide light”), his real name Kim Seokjin, and more. 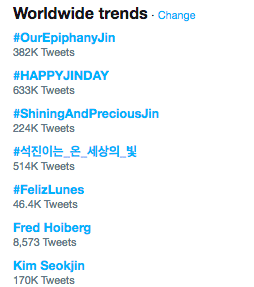 Jin uploaded a handwritten letter to ARMY on his birthday. In the letter, he talks not only about fans’ birthday celebrations, but also about awards that BTS has recently won. This month alone, BTS has won big at Korean award ceremonies including the 2018 MBC Plus X Genie Music Awards, 2018 Asia Artist Awards, and the 2018 Melon Music Awards.

Jin shared the letter with the caption, “Thank you for your birthday wishes!” He wrote:

“Everyone,
Hello. This is Jin.
Clap clap clap. Today is my birthday, everyone.
I’m really happy that it’s my birthday.
The fact that it’s my birthday makes me happy, but I think I’m even happier because I’m seeing our ARMY having fun because of my birthday, and doing fun things together on Twitter and our fan cafe. ARMY’s happiness is the happiest thing for me.
And recently, we won Daesangs and also popularity awards!
I’m so, so happy about the Daesangs too but I really, really love the popularity awards that we receive because of what ARMY does for us.
Thank you so, so much, ARMY!
Ah… also, every year I’ve prepared something to entertain you, but this year I wasn’t able to prepare anything, which I’m sad about.
In the future I’ll work harder so that I can try to always show you a good image and good content. I love you.
From, Jin.”

He added in English, “Sorry to my international ARMY that I am not good at English. But I love you.”

Jin’s fellow BTS members have been celebrating the big day by following the group’s tradition of sharing fun and embarrassing photos of the birthday boy!

RM revealed some hilarious photos of Jin and described them as a “work of art” in the caption.

Suga shared a funny video of Jin from their recent fishing trip together, wishing him a happy birthday and calling him a “fishing king.”