Hyolyn and MAMAMOO’s Hwasa shared stories about the outfits from their award show performances, which caused quite a stir among the Korean public for being more revealing than the average girl group outfit.

On the January 30 broadcast of MBC’s “Radio Star,” the singers appeared as guests and answered questions about their outfits.

Hyolyn performed the “Black Knight” drama soundtrack “Wind-Up Clock” (literal title),” “See Sea,” and “Dally” at the 2018 KBS Drama Awards. When Host Cha Tae Hyun asked if she knew the outfit would cause this much controversy, Hyolyn replied, “Of course I didn’t know.”

When host Yoon Jong Shin brought up how she said she chose the outfit after lots of thought, Hyolyn explained, “When I was in SISTAR, I was always at the broadcasting studios during the time of the year-end award shows. But this time, I thought the year would go by without me attending a single award show. KBS then contacted me and asked me to perform. They gave me such a good opportunity, so I worked hard to prepare for it.”

She continued, “That outfit was handmade by a designer, and it’s the only one that exists in the world. It’s an outfit I purchased because I wanted to wear something amazing at my solo concert. I wanted to wear the most luxurious and amazing outfit I owned at that event.” Hyolyn then made everyone laugh by adding, “I’ve given the outfit to a mannequin. I bought a mannequin and put that outfit on it.” 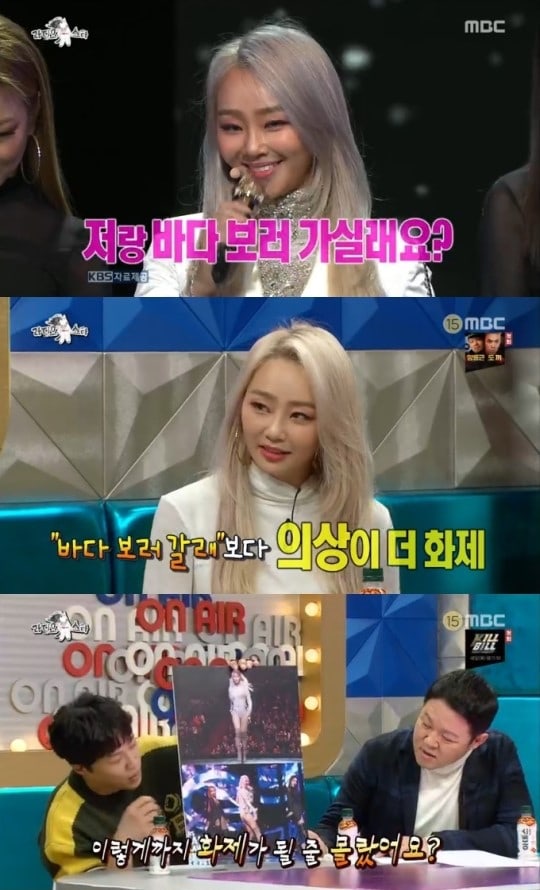 Hwasa also made headlines when she wore a red bodysuit during her performance at the 2018 MAMA Fan’s Choice in Japan.

She continued, “I thought that I’d rather not wear something revealing at all if I couldn’t commit to it. I also don’t think that it’s important what I wear. Instead, I think about what I can wear to make the performance even better, or how I can pull it off well.”

Hyoyln commented, “While listening, I thought that it was cool how the way we think is similar. Since I only focus on the performance, I also had many instances where people tried to stop me [from wearing certain outfits].”

When Hwasa mentioned that Hyolyn has often worn outfits like that before, Hyolyn explained, “I’ve had many concepts like that for my past albums, so I guess I momentarily forgot that it’s a bit much. All of the concepts that I released so far were like this, so when I saw Hwasa’s performance, I thought, ‘Where did she buy that?'”

Host Kim Gook Jin asked Hwasa about a negative factor of the red bodysuit, and Hwasa answered, “It gets stuck. But if I adjust it while performing, people may think that it’s uncomfortable for me, so I never fixed it.”

She added, “It was my first time preparing and performing alone, so I was really determined. I performed [with so much energy] as if I had lost my memory. After I finished, I went into the dressing room where there was a shower. When I went inside, I suddenly choked up. I felt as if I was alive, and I felt so happy.” 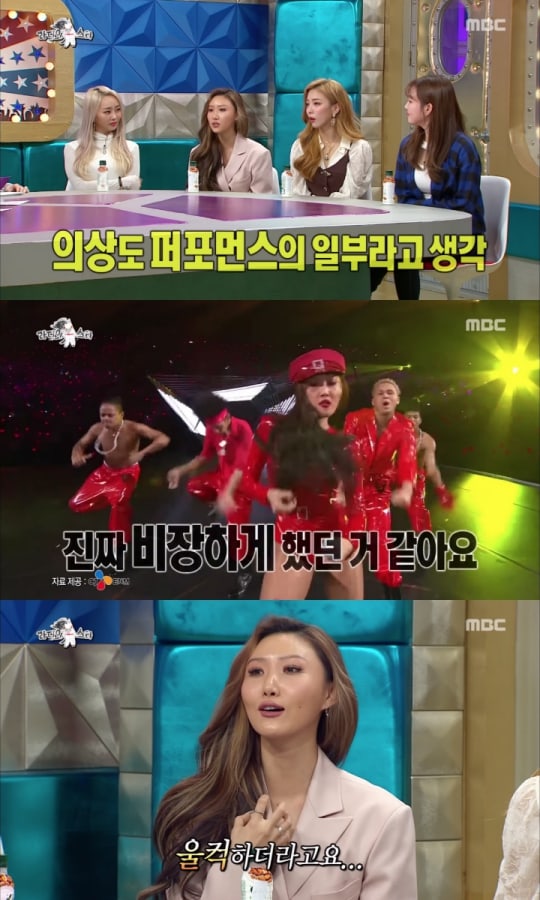 MAMAMOO
Hyolyn
Hwasa
Radio Star
How does this article make you feel?