KBS2’s new four-episode variety show “In Sync” (literal title) has revealed several teasers ahead of its premiere on March 5! 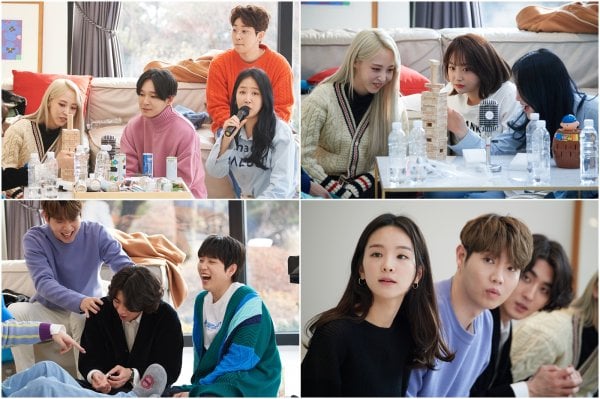 The stills revealed on February 28 show the nine cast members meeting for the first time at a pension in Gangwon province. They look like university students gathered together for a fun day of games, and the wide smiles on their faces are almost contagious.

The production staff shared, “Because the show was recorded in an open area surrounded by nature instead of a nerve-wrecking set or stage, all of the cast and staff had lots of fun filming together. [The show] will provide a special opportunity for [fans] to see their favorite singers in a natural setting.”

Also released was a teaser video showing more details on the show. Following performances by each artist trying to appeal to the other singers, the teaser cuts to the male and female cast members each gathering in separate rooms and waiting for text messages from anyone that’s interested. Everyone looks nervous and excited as if they’re about to confess to their first love.

Most recently on March 3, KBS2 revealed stills of Moonbyul, Punch, and Sandeul participating in the first matching session. Sandeul strikes an exaggeratedly confident pose, but he soon reverts to a very modest way of sitting.

On this day of filming, the artists each chose a room that has their favorite instrument and began the first matching session with the singers that selected the same room as them. They had to sing in front of their potential partners to win their hearts, and Sandeul apparently made both Moonbyul and Punch fall for his husky voice.

Which singers do you think will become partners?

You can also check out short clips of some of the singers showing off their skills below!