After earning a double crown on Gaon’s weekly charts last week, MONSTA X topped the physical album chart for the month of February with their second studio album “Take.2: We Are Here.”

SHINee’s Taemin came in at No. 2 with his solo mini album “WANT,” followed by HOTSHOT’s Ha Sung Woon‘s “My Moment” at No. 3, SEVENTEEN’s “You Made My Dawn“—which also received an official platinum certification—at No. 4, and Yoon Ji Sung‘s “Aside” at No. 5. 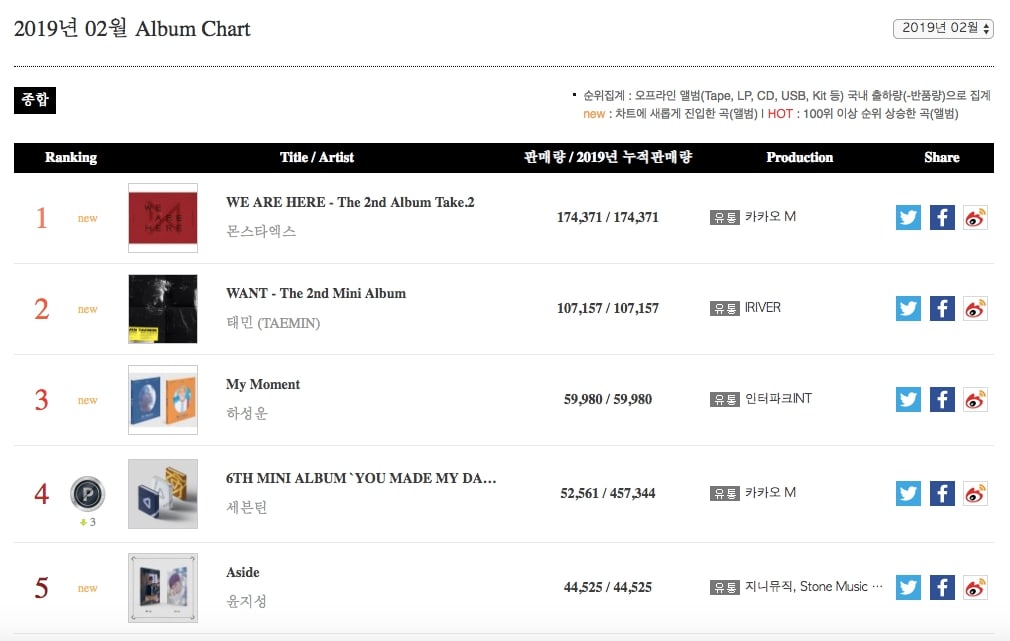 Ha Sung Woon topped the physical album chart for the week of February 24 to March 2 with his solo debut mini album “My Moment,” while (G)I-DLE’s new mini album “I Made” debuted at No. 2. LOONA’s repackaged album “X X” rose to No. 3 on this week’s chart, followed by Park Yoochun’s first solo studio album “Slow Dance” at No. 4 and MONSTA X’s “Take.2: We Are Here” at No. 5. 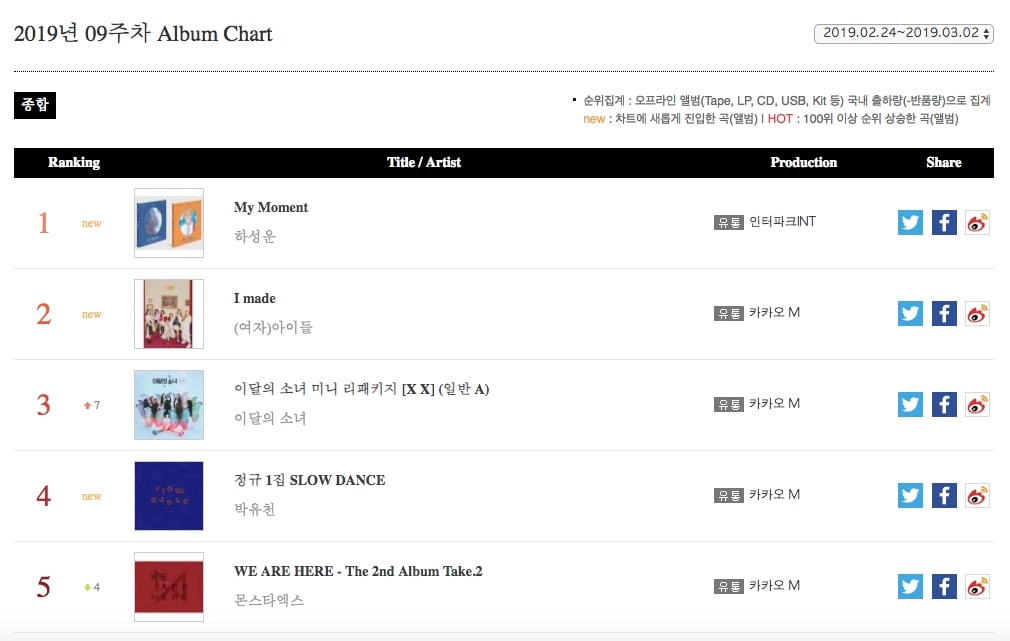 Woody topped this month’s overall digital chart with “Fire Up,” followed by MC the Max’s “After You’ve Gone” at No. 2 and Chungha’s “Gotta Go” at No. 3. MAMAMOO’s Hwasa‘s “TWIT” debuted on the monthly chart at No. 4, while Lee Sora and BTS’ Suga’s collaboration “Song Request” came in at No. 5 for February. 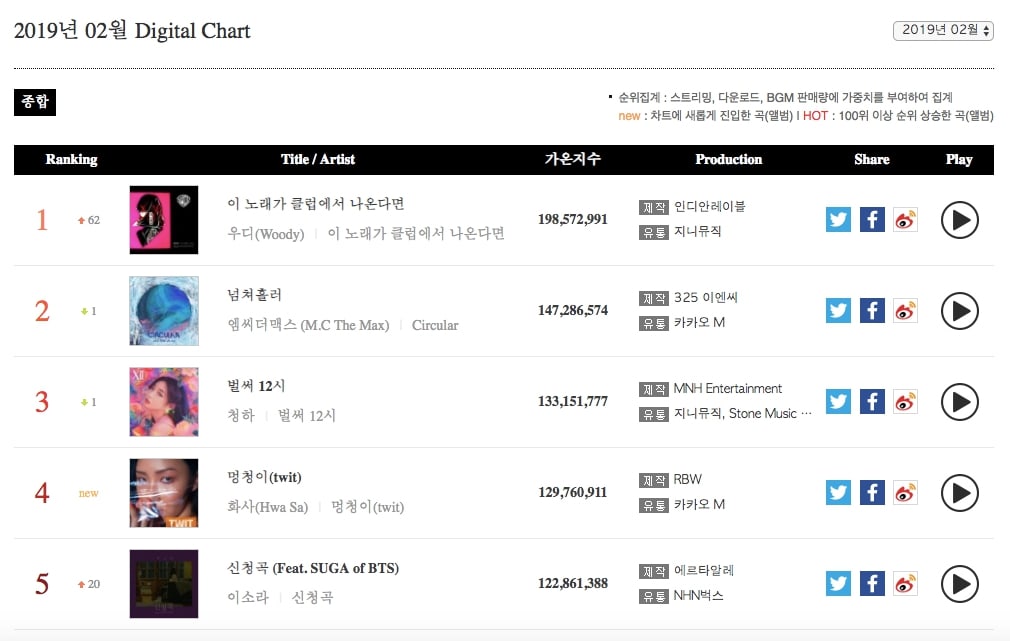 N.Flying swept all three digital charts this week with their hit song “Rooftop,” which has made an incredible comeback on the Korean music charts after enjoying a recent surge in popularity due to word of mouth. The band has even returned to music shows to perform the song again this week, despite having originally concluded their music show promotions for “Rooftop” on February 8.

“Rooftop” shot to the top of this week’s overall digital chart, wlhile Hwasa’s “TWIT” stayed strong at No. 2 for the week. ITZY’s “DALLA DALLA” maintained its position at No. 3, followed by Woody’s “Fire Up” at No. 4, and Kassy’s “The Day was Beautiful” at No. 5. 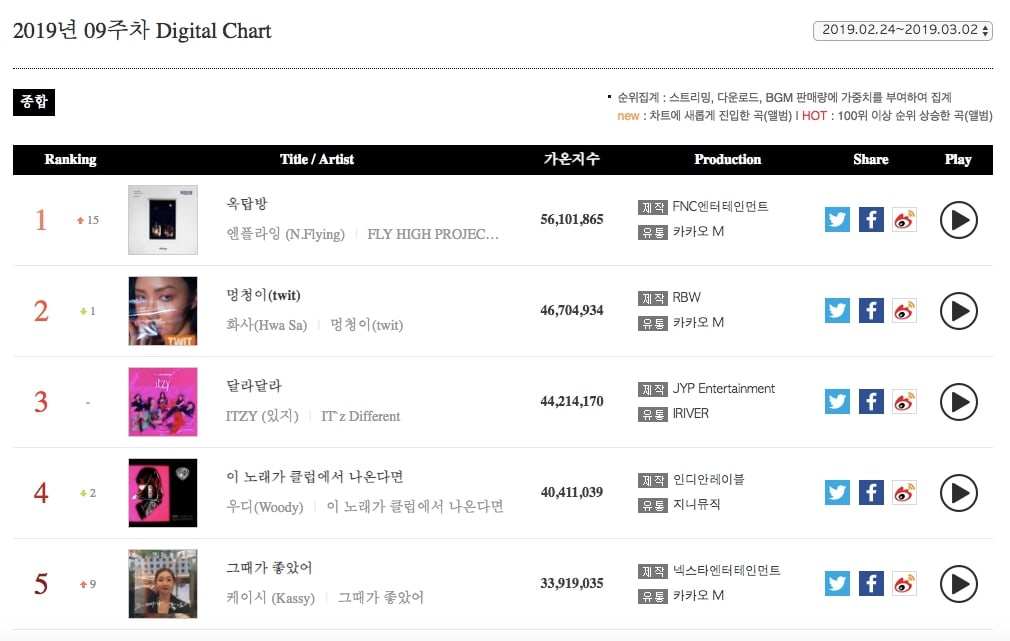 Hwasa topped this month’s digital download chart with her solo debut track “TWIT,” with Woody’s “Fire Up” trailing at No. 2, ITZY’s “DALLA DALLA” at No. 3, Lee Sora and Suga’s “Song Request” at No. 4, and Chungha’s “Gotta Go” at No. 5. 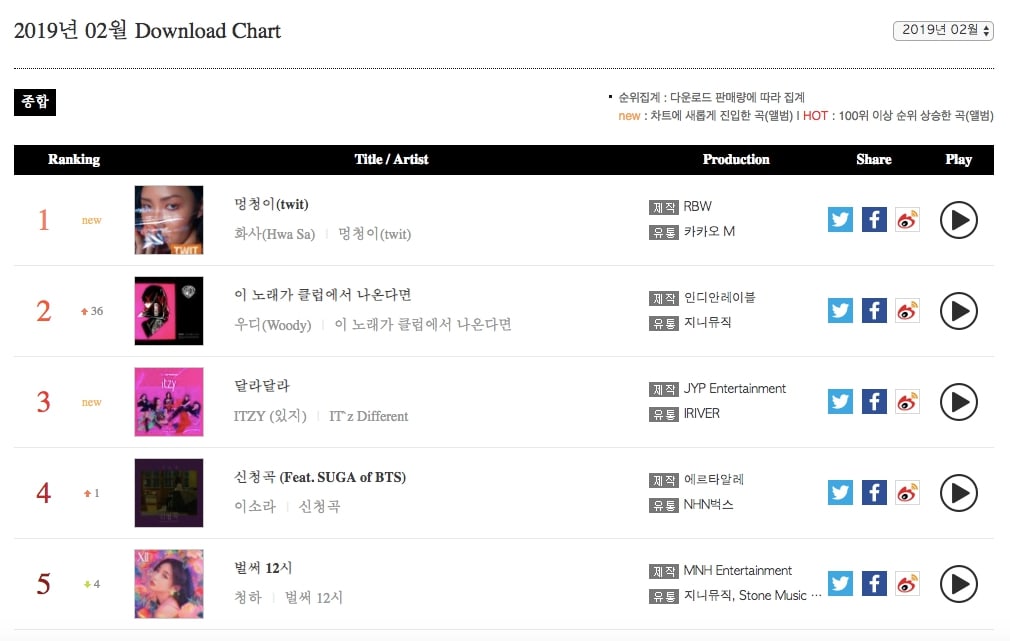 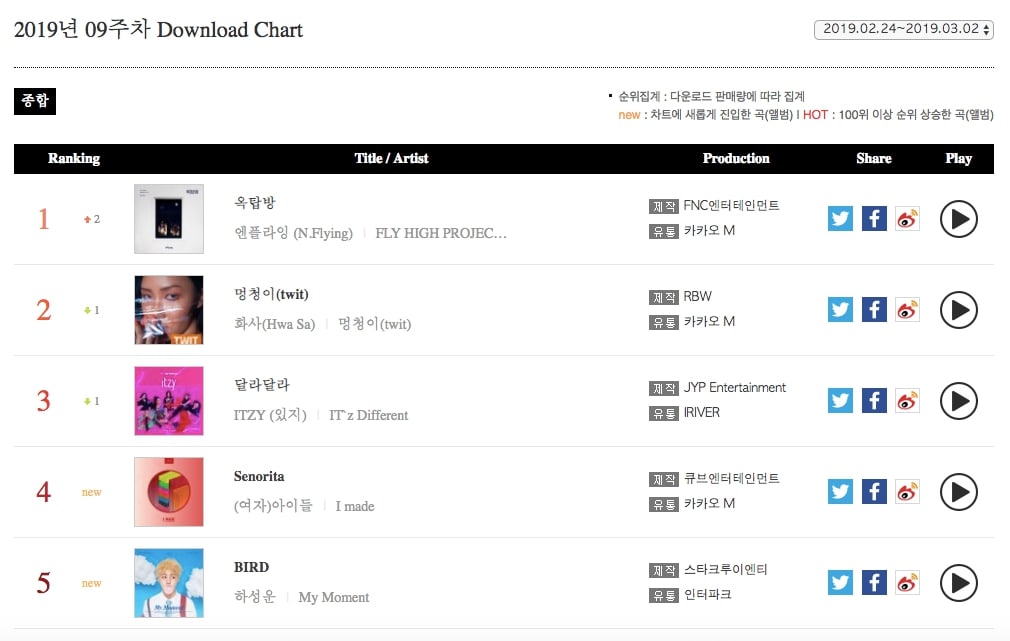 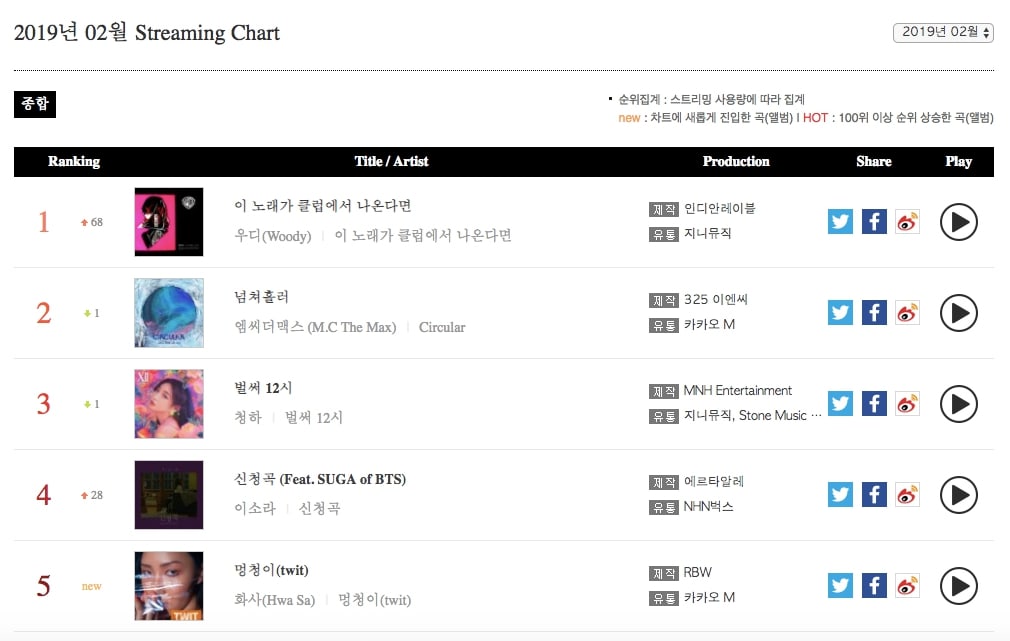 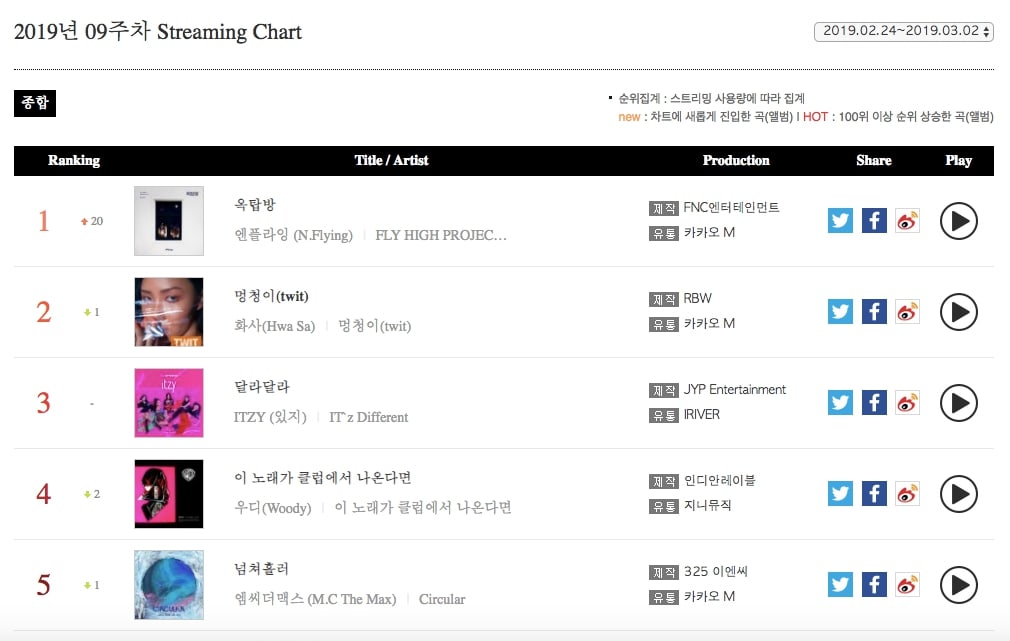 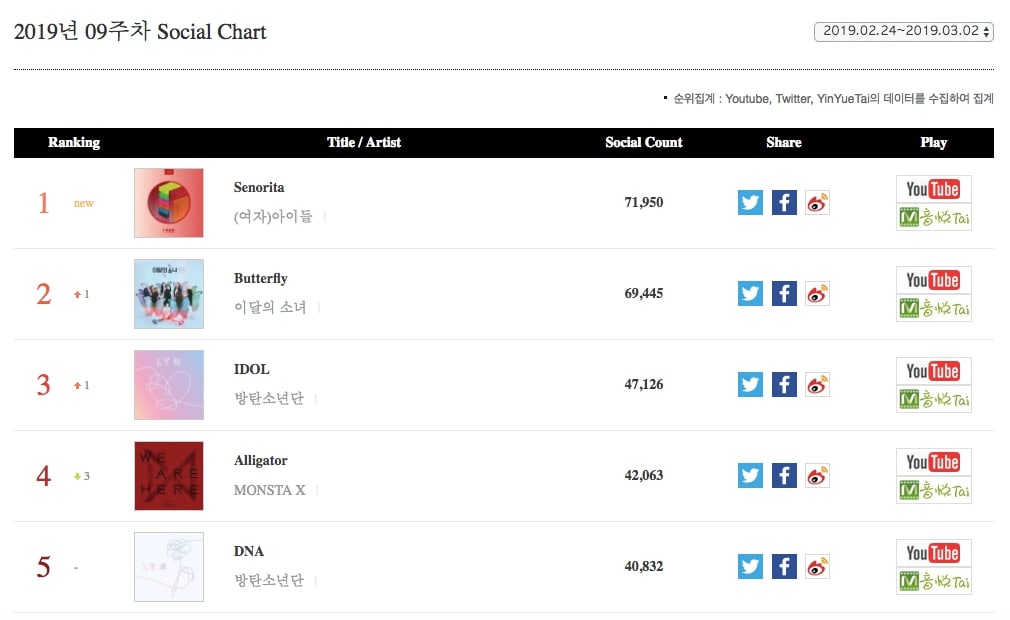