SBS funE’s Kang Kyung Yoon has released a new exclusive article on the alleged connection between the police, Seungri, and others in the same chatroom.

After receiving the KakaoTalk data from lawyer Bang Jung Hyun on February 22, the Anti-Corruption Survey and Evaluation Division of the Anti-Corruption and Civil Rights Commission closely analyzed it for 15 days and transferred it to the Supreme Prosecutors’ Office, not the police, on March 12.

At an interview with SBS on March 12, lawyer Bang Jung Hyun said, “It was data containing connections with several governmental authorities, and I was especially suspicious about the connection with the police. I was doubtful about how justly the investigation would have been handled if I had handed it over to the police.”

SBS funE received the KakaoTalk messages and analyzed them.

In July 2016, Seungri opened a club named Monkey Museum in the Gangnam district of Seoul. However, the police were dispatched to the club on the day of its opening, and Seungri was investigated for having illegal structures in the building.

The conversation talked about the new club and went as follows:

Mr. Kim: I think we’ll hit the jackpot if we just solve the problem with the air conditioner [in the club].

Mr. Kim: I saw that [CEO Yoo] texted with the “police chief” yesterday.

Mr. Kim: I think the problem with the person telling on us will be solved as well.

Seungri: What did he say?

Mr. Kim: It was really long. Yesterday, another business took a photo of the inside of [Monkey Museum] and reported it.

Mr. Kim: The chief said something suggesting that the other business had told on us because they were jealous and that we didn’t have to worry because he would take care of all of it. 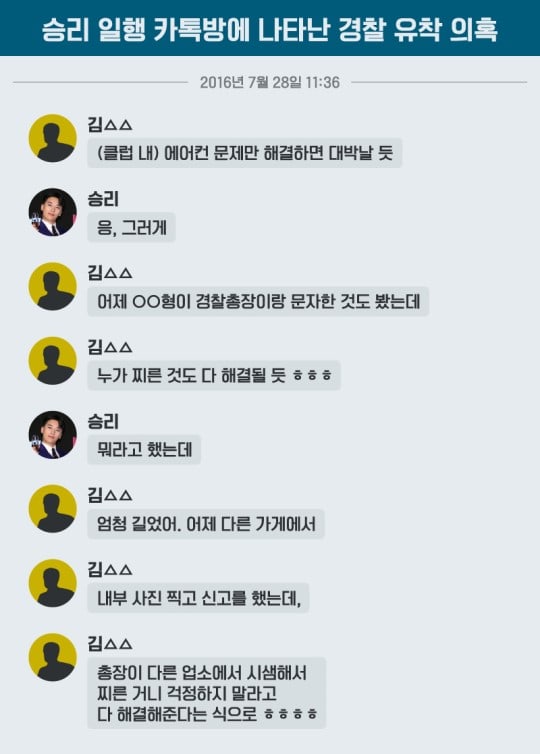 Mr. Kim is the same person that allegedly sent the prostitutes to the hotel rooms when they arranged sexual escort services for business investors. He was also accused of sharing illegal hidden cameras in the chatroom with Jung Joon Young.

SBS funE states that it is hard to fully believe Mr. Kim’s messages because he spelled “Commissioner General of the police” as another word in Korean that means “police chief.” It is also unclear whether he is referring to the Commissioner General of the police at that time or the Commissioner of the Seoul Metropolitan Police Agency. Further investigation will reveal whether Mr. Kim had falsely reported to Seungri or if they had real connections with high-ranking police officials.

SBS funE contacted Mr. Kim and attempted to receive a response, but he did not say anything.

They succeeded in interviewing CEO Yoo, who said, “It’s true that I was at Monkey Museum’s opening ceremony. But I don’t know any sources from the police. I don’t know the Commissioner General or the Commissioner of the Seoul Metropolitan Police Agency, and I’ve never met them or been in the same place with them.”

Seungri stated through his lawyer, “Monkey Museum received criminal punishment and a fine for violating the Food Sanitation Act before. It is not true that he tried to cover up police investigations.”

Meanwhile, the current Commissioner General of the Korean National Police Agency, Min Gap Ryong, held a press conference on March 13 and stated, “I will check thoroughly to find out if there was an incident that the police were involved in at the time.”

SBS’s “8 O’Clock News” on March 13 KST will report on further suspicions of connections with the police that were found in the KakaoTalk messages. Reporter Kang Kyung Yoon, who first reported about Seungri’s sexual escort service issue, will also be appearing on the news to talk about the matter.

Seungri
XPN
Kang Kyung Yoon
How does this article make you feel?