According to the report, the police officer from Seongdong Police Station requested the digital forensics company to write a confirmation letter claiming that the data from the cell phone was unable to be restored.

On August 22, 2016, the police officer called the forensics company and asked, “Since we’re working on the case, there’s something that’s a bit complicated. Jung Joon Young told us that he left the data here. Doesn’t it take some time? He admitted it himself anyways, and we don’t have much time, so I wanted to ask, since the device is old and worn-out, if you could write us a confirmation letter stating that the data was unable to be restored for the data confirmation results.” 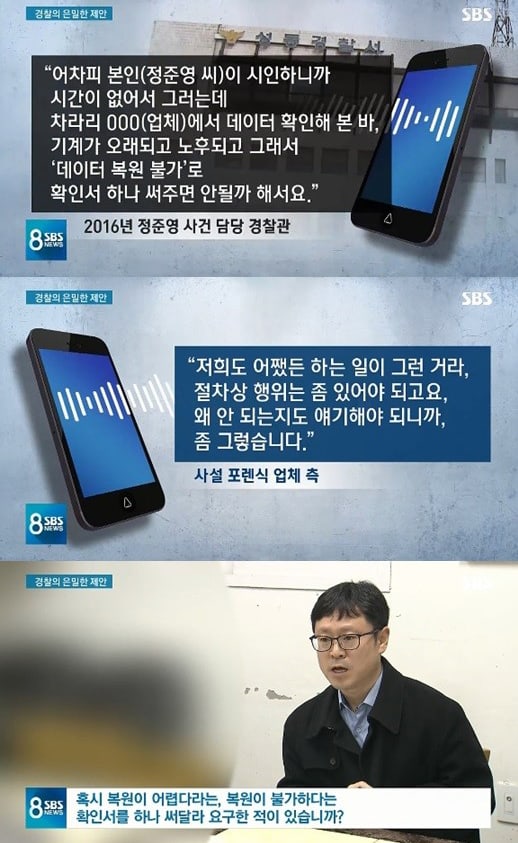 In response to the police officer, the forensics company replied, “The work we do is like that, so there should be some type of procedural action. I also have to state why [the data cannot be restored], so I don’t know about [this request].” Upon being rejected, the police concluded the investigation before receiving the data.

When SBS met with the police officer in question, he stated, “This is the first time I’m hearing the words ‘data unable to be restored.’ It’s unheard of for the investigator in charge [of a case] to ask a private company for something like that. [The investigation] is still in progress.”

SBS then brought out proof of his involvement in the situation as they played the recorded tape over for him. The police officer commented, “It’s true that that’s me making the call, but it wasn’t a situation for me to say something to that extent.” He also stated that he did not remember the situation, and that during the time, they were not given the cell phone. He then asked, “Am I in a quite awkward position right now?”

In regards to this, Lawyer Baek Sung Moon, who previously shared his opinion on Jung Joon Young’s hidden camera controversy, stated, “That could be an issue of the destruction of evidence, dereliction of duty, or abuse of power.”

Jung Joon Young
XPN
How does this article make you feel?