Former Yuri Holdings CEO Yoo In Suk has issued a statement in which he addresses his connection to Senior Superintendent Yoon and more.

Yoo In Suk, who has been Seungri’s business partner, was previously described by SBS as the “problem solver” of the controversial group chatroom, which includes Seungri, Jung Joon Young, Choi Jong Hoon, and four other individuals. He is reported to be friendly with Senior Superintendent Yoon and was revealed to have helped cover up the news of Choi Jong Hoon’s drunk driving incident in 2016.

On March 19, MBC’s “Newsdesk” reported the contents of a letter they received from Yoo In Suk, which he described as a written apology. In it, he denies all accusations being made against him.

Yoo In Suk stated that he had not received any information from Yoon regarding the crackdown on Monkey Museum, the club that Yoo In Suk and Seungri had opened. He said that Yoon had only given him sincere advice as he told him, “You shouldn’t operate a business like that.”

However, Yoon has been booked as a suspect on suspicions of leaking official secrets. The police determined that Yoon had given a significant amount of information about the investigation to Yoo In Suk. “Newsdesk” stated that it appeared Yoo In Suk was taking Yoon’s side to cover up not only Yoon’s criminal charges, but also his own.

Yoo In Suk stated, “I followed Senior Superintendent Yoon as a hyung, and we of course had meals and played golf together a few times. I learned a lot from him. I am sorry for causing trouble for a person who has been an outstanding civil servant.” 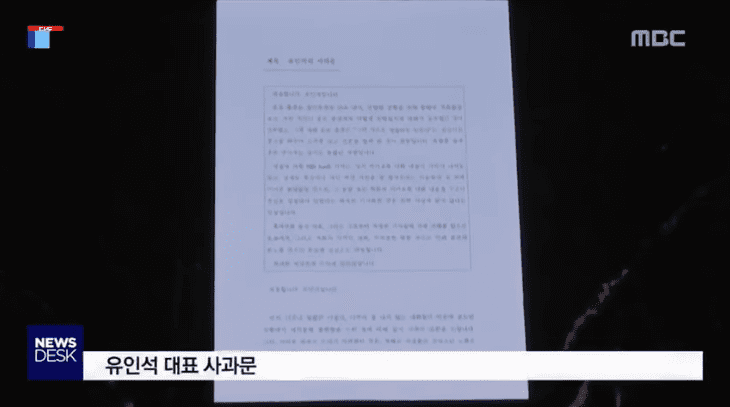 In regards to the suspicions that Seungri had provided sexual escort services for foreign investors, Yoo In Suk said, “The content of the KakaoTalk conversations were jokes or false.”

The police are currently conducting an investigation into the suspicions of Seungri providing sexual escort services and more.

On March 19, both Yoo In Suk and Yoon were banned from leaving the country as the police are investigating whether Monkey Museum’s previous violation of the Food Sanitation Act was covered up by the police for a bribe.

Yuri Holdings
Yoo In Suk
Monkey Museum
How does this article make you feel?