On the March 25 broadcast of the show, MBC interviewed store-owners of Aori Ramen, which was commonly referred to as “Seungri’s ramen restaurant,” to listen to their stories.

According to “Newsdesk,” the fallout of the Burning Sun controversies directly affected Aori Ramen, as it was revealed that daily sales have fallen more than 70 percent.

There are 44 Aori Ramen restaurants in Korea, and seven stores scattered internationally. In an entertainment program last year, Seungri revealed that annual sales were estimated at 26 billion won (approximately $22.9 million). He also stated, “If I mess up, many people will be unable to receive their monthly pay, so I feel an immense sense of responsibility.” After the first reports about “Burning Sun Gate” broke in late January, however, sales began to drop. 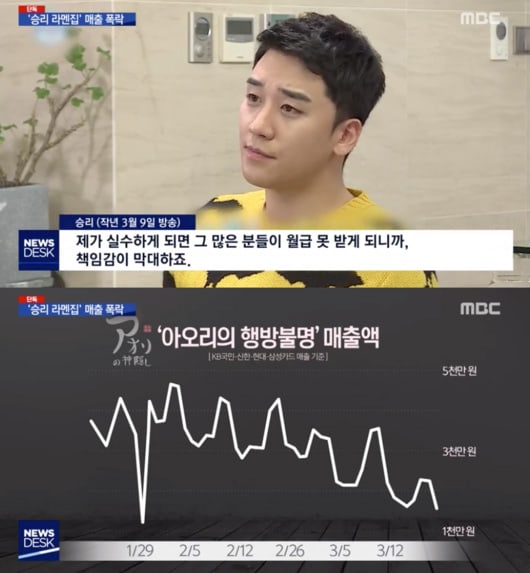 One store-owner stated, “It’s like a dream. Something unimaginable has happened. The inside of my mouth is filled with sores. I can’t even speak to the staff.”

When “Newsdesk” compared the sales records of the franchise stores through a credit card company, they found that sales decreased 23 percent from January to February, following allegations of police corruption and sexual assault at the club Burning Sun, and 47 percent in March. When accusations of Jung Joon Young’s involvement in illegally filming his sexual partners were brought to light, sales plunged 74 percent.

Store-owners revealed that many have posted disclaimers to state that their stores have nothing to do with Seungri, except for some stores that opened in the early stages of the franchise’s establishment.

Additionally, although Aori Ramen’s headquarter company said on March 7 that it would return tens of millions of won in franchise fees to its store owners, the company has not proceeded with any further measures.