Gaon Chart has revealed its chart rankings for the week of March 17 to March 23!

Baek Yerin also swept the digital charts this week, topping all three charts with her new self-composed track “Maybe It’s Not Our Fault.” 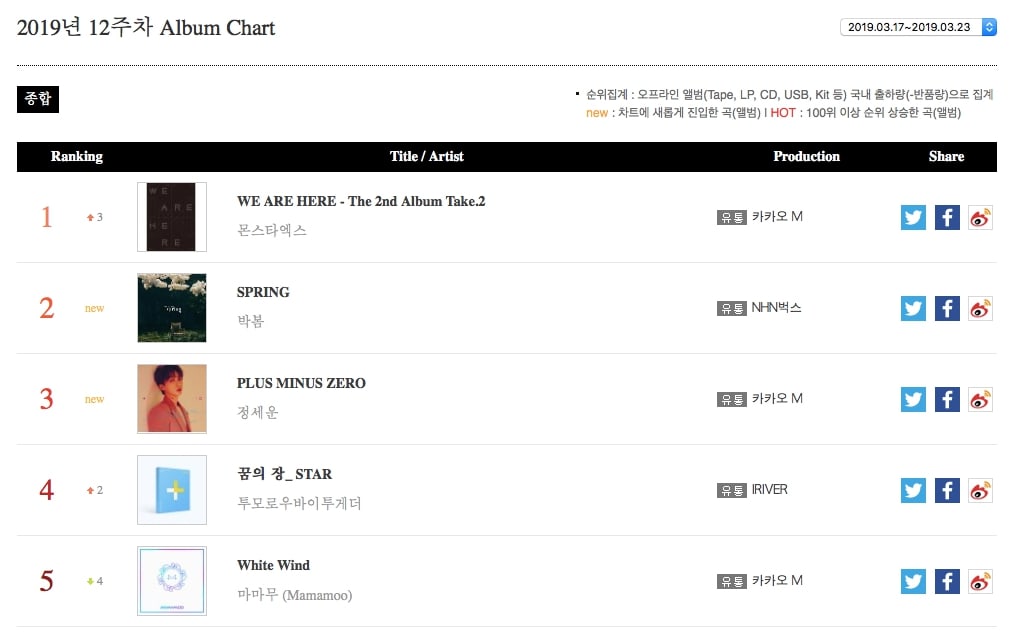 Baek Yerin’s “Maybe It’s Not Our Fault” debuted at No. 1 on the overall digital chart, with Epik High and Crush’s collaboration “Love Drunk” charting at No. 2. Park Bom’s solo track “Spring” (featuring Sandara Park) rose to No. 3 this week, with N.Flying’s “Rooftop” trailing at No. 4 and MAMAMOO’s “gogobebe” at No. 5. 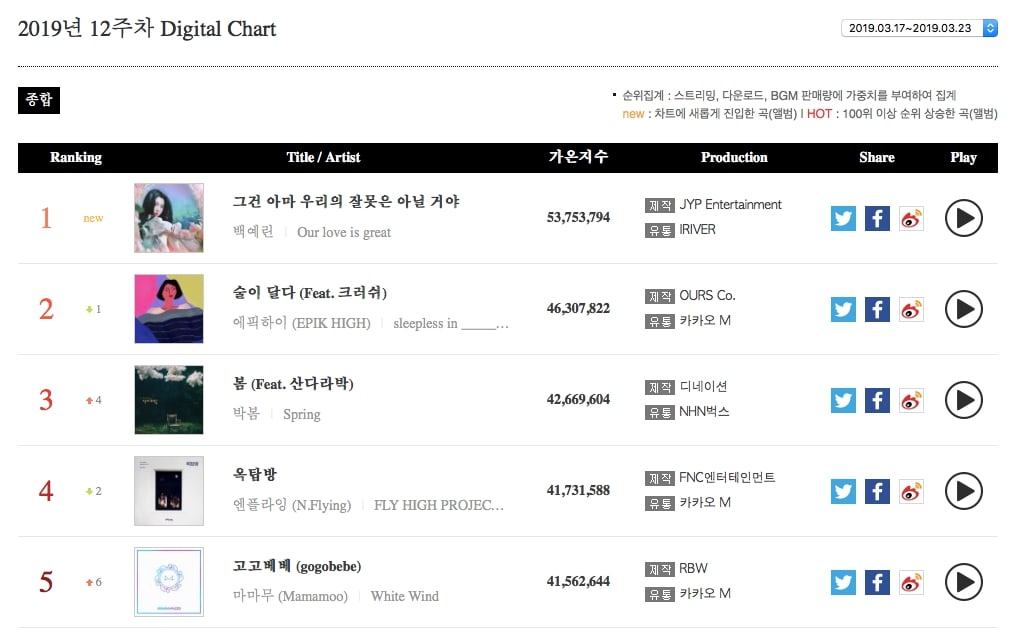 New releases dominated this week’s download chart, with Baek Yerin claiming both No. 1 with “Maybe It’s Not Our Fault” and No. 5 with “Merry and the Witch’s Flower,” another song from her new mini album “Our Love is Great.” MAMAMOO’s “gogobebe” held onto its spot at No. 2 this week, while Heize’s “She’s Fine” and Jang Beom June’s “Every Moment with You” debuted at No. 3 and No. 4 respectively. 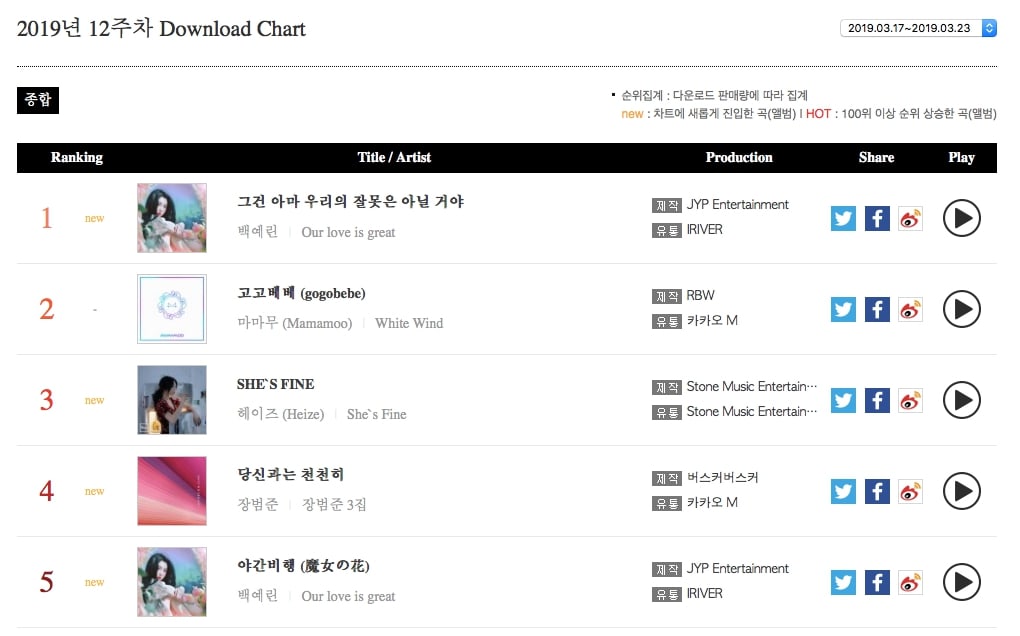 Baek Yerin’s “Maybe It’s Not Our Fault” also debuted at No. 1 on the streaming chart, followed by Epik High’s “Love Drunk” at No. 2 and N.Flying’s “Rooftop” at No. 3. Park Bom’s “Spring” charted at No. 4 this week, while MAMAMOO’s “gogobebe” rose an impressive 26 spots in the rankings to take No. 5 for the week. 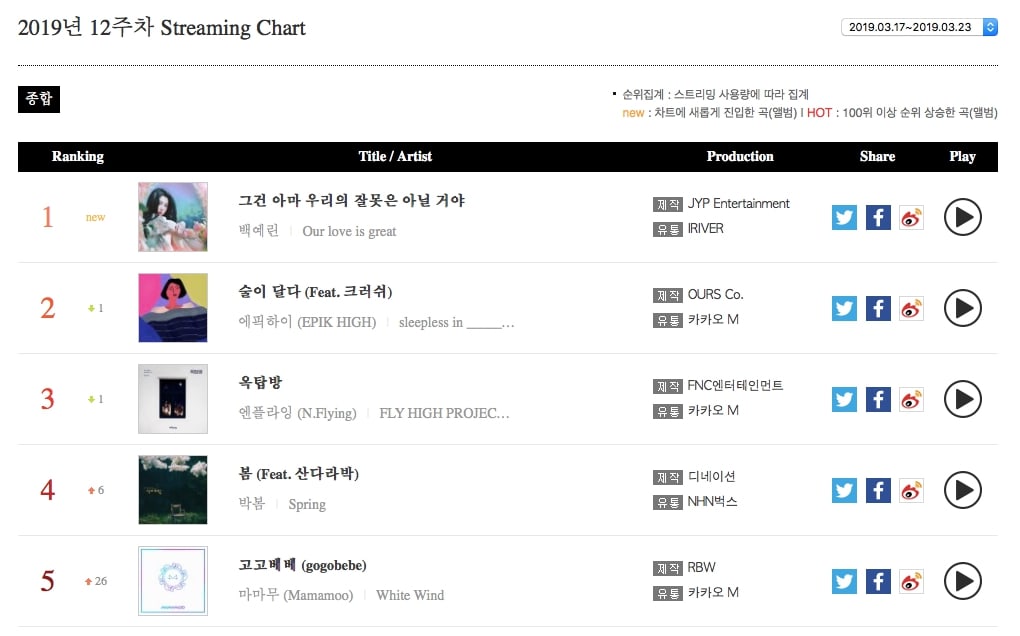 MAMAMOO’s “gogobebe” topped this week’s social chart, with Yuehua Entertainment’s new girl group EVERGLOW’s debut track “Bon Bon Chocolat” charting at No. 2. MOMOLAND’s new title track “I’m So Hot” debuted at No. 3 on the chart, followed by GWSN’s “Pinky Star (RUN)” at No. 4 and BTS’s “IDOL” at No. 5. 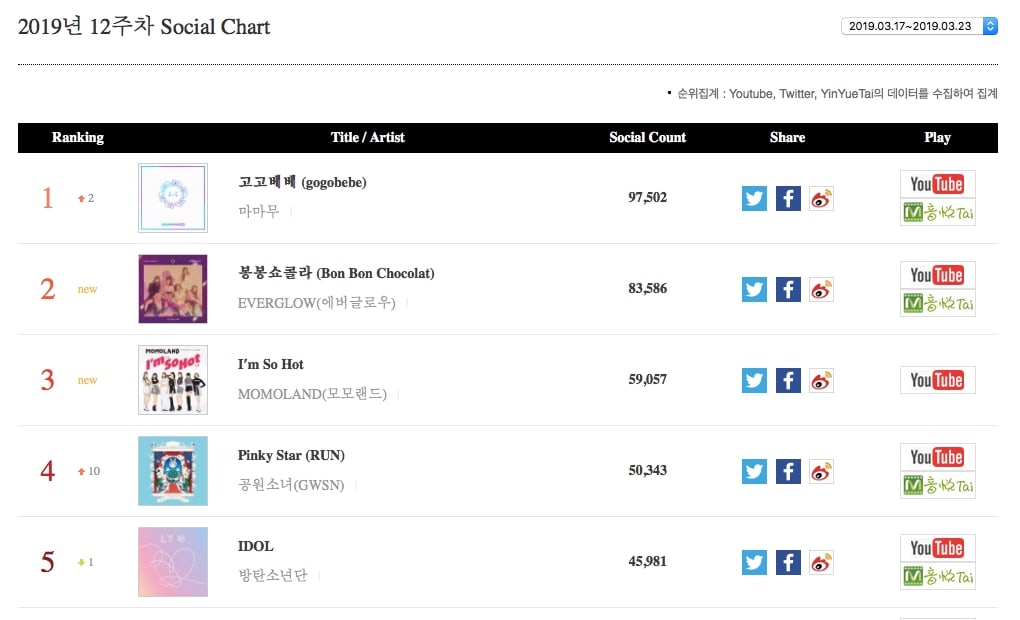