7 Times The Finale Of “Touch Your Heart” Touched Our Hearts

I started out this series of “Touch Your Heart” articles by making “grim” and “sunny” puns, so it’s only fitting that I end it with another lame pun, right? Heh.

So here with we have it, dear readers, after many cute, swoony, and at times cheesy moments, not to mention the multiple PPLs (seriously, can someone be so kind as to tally the number of times we saw PPLs in the finale alone?), we’ve reached the ending of “Touch Your Heart.” And as expected of this bubbly rom-com, we end the show with an abundance of sweetness as basically everyone gets their happy ending. So for one last time, let’s read on to see the moments that touched our hearts from these two final episodes.

This shot certainly touched MY heart.

Warning: You should know the drill by now. Spoilers ahead!

When Jung Rok does something new and doesn’t die in the process.

Yoon Seo’s (Yoo In Na) production team needs an on-set advisory counsel to help with the legal jargon and all that. CEO Yeon (Oh Jung Se), being Yoon Seo’s No.1 fan, absolutely jumps at the chance. But when Jung Rok (Lee Dong Wook) realizes that he can spend time with Yoon Seo, he quickly volunteers instead, much to the surprise of his colleagues.

At the filming location, Jung Rok and Yoon Seo covertly sneak lingering touches and exchange love notes, to the chagrin of Yoon Seo’s Manager Oppa (Oh Eui Sik). He tries his best to run interference, but the two lovebirds are just too in love to be stopped.

Attorney Choi (Shim Hyung Tak) finally accepts that he has real feelings for Attorney Dan (Park Kyung Hye), and asks if they can start dating for real. And when she’s still hesitating after he counts down to one, he lowers his ego and continues, “…0.5…..0.25……….0.125.” Seeing his sincerity, Attorney Dan leaps into his arms and giddily agrees. And as the music swells in this romantic moment, the camera suddenly cuts to a wide shot, and we see that they’re actually in the middle of a busy park.

After the couple tells everyone at the law firm of their relationship, Attorney Choi is reminded of Attorney Dan’s “ability” to fall in love easily. When he approaches her with this insecurity, she assures him that, “From now on, I’ll only fall in love with one person easily, over and over again.” Such a good line!

This was always the off-beat couple who literally played around with clichés, so I’m glad that while they’re still as quirky as ever, they’ve also added some sincerity to this relationship.

When Jung Rok helps Yoon Seo with her scenes, but not in a fun way

When Yoon Seo asks Jung Rok to be her scene partner, she imagines him offering her help with the kissing scenes. (I totally thought that whole scene was real. Wow, Yoon Seo has such a good imagination!)

But in true Jung Rok fashion, he becomes very immersed in his role and corrects her lines, her gestures, everything. It’s hilarious to see how much fun Jung Rok is having, while Yoon Seo just looks miserable.

When Jung Rok crosses the line, but in a good way

After Jung Rok sees Yoon Seo film her actual kiss scene (he unsuccessfully tried to negotiate the kiss down to a handshake), she tries to assuage his jealousy by telling him that they didn’t really kiss, and it only looks real because of the camera angles. Jung Rok then takes it upon himself to demonstrate how to kiss for real before asking if he can “cross the line,” a reference to how they slept with a rolled up blanket in between them the night before.

Oh, and he cooks breakfast the next morning too (while also reiterating he didn’t break any laws when going through her kitchen.) Seriously, where can we find ourselves a Jung Rok?

When Manager Oppa informs Yoon Seo her overseas shooting as been moved up to the next day, Jung Rok and Yoon Seo are determined to spend all their available time together. Sadly, life gets in the way, and work schedules keep popping up left and right. But the two are completely supportive of each other, with Yoon Seo going to the law firm to be Jung Rok’s one-day secretary, whereas Jung Rok tunes in to Yoon Seo’s live broadcast, even (anonymously) winning a phone call from her.

Even during Yoon Seo’s time abroad, the two remain as lovey-dovey as ever through video calls and texts. At one point, a published article claims that Yoon Seo is seen on a date with her co-star. But instead of being mad, Jung Rok tells her he doesn’t believe the rumors because he trusts her, and even throws her a welcome home surprise party. Awww…

When Se Won (Lee Sang Woo) jokingly complains about living with Jung Rok, Yeo Reum (Son Sung Yoon) invites him to move in with her instead. Jung Rok happily sends him off (“Get lost”), but we all know he’s a little sad in the inside. Later, Se Won learns that the lease for Yeo Reum’s place is nearly up, so he secretly finds a new place for them and proposes to her.

To be honest, I still don’t understand the point of Yeo Reum’s character, but I like Se Won, so if he’s happy I’m happy. And there’s something charming about the way this couple just chugs along naturally, without any big moments or major precipitating factors. The sense of normalcy just makes the relationship seem all the more relatable.

When everyone lives happily ever after

Previously, when Yoon Seo wanted to release an article denying her relationship with her co-star, her CEO persuaded her out of it for the sake of the on-going drama. But the moment the drama wrapped, Yoon Seo told her CEO she was going to do whatever she wanted from then on. And so, at the agency’s 10-year anniversary party, Yoon Seo and Jung Rok arrive in style and publicly affirm their relationship in front of the media as well as their many smiling colleagues.

Well, that’s been a mostly fun ride. The reason I started watching “Touch Your Heart” was for Lee Dong Wook and Yoo In Na, as I loved their chemistry in “Goblin,” as I’m sure a lot of you did too. And truly, this drama was one that capitalized on their chemistry and highlighted their talents.

Now let’s be honest. While the writing does have its moments, there’s barely any real content. The cases in the earlier episodes were always wrapped too conveniently and within 20 minutes of their introduction. Characters like Yeo Reum and Gang Joon (the stalker) were obviously set up to be significant players, but lost steam before they even kicked into gear. I’ve read comments suggesting that the Gang Joon story line was toned down because of what is happening in reality in the South Korean entertainment industry, and if that’s true, I would say that’s a good call, because it did feel like it was hitting close to home while I was watching those episodes. And I’d much rather believe that the writers are playing it smart and safe rather than them turning in shoddy writing.

All in all, it does feel like the writers missed the chance to explore bolder cases and lean a bit more into the “law” theme, as they definitely have the cast to pull it off. And there’s no doubt this was a very charismatic cast who basically carried the drama through. From our leads of Lee Dong Wook and Yoo In Na, who shined so brightly, to the comedic players like the CEOs and the Choi-Dan couple, to the more quiet but just-as-effective characters of Se Won and the others, this was a group that delivered on all fronts. And it’s their impressive talent, charm, and chemistry that allowed “Touch Your Heart” to touch our hearts, and made it worth the watch. That, and their killer OSTs. 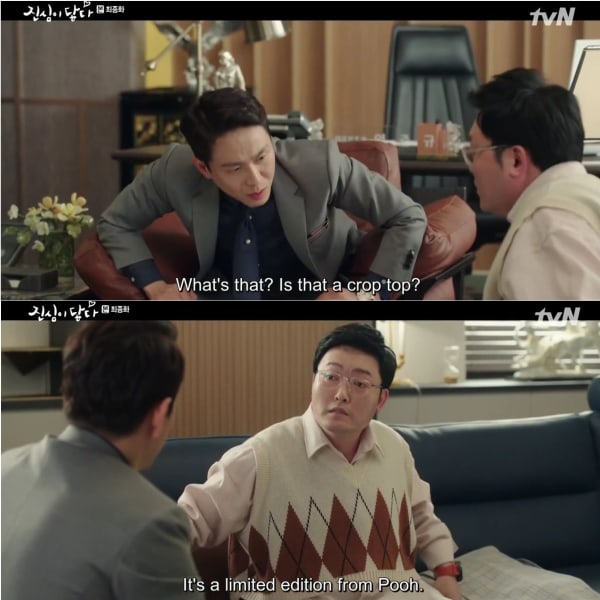 I may have laughed a little too much at this line.

Which part of “Touch Your Heart” was the highlight for you? And were you satisfied with how the drama ended things? Let us know in the comments below.

Belinda_C would love to see Lee Dong Wook and Yoo In Na in another project! They really do sparkle together on-screen! Come discuss this drama and SEVENTEENxShinhwa with her on Twitter!