EXO has officially rung in the seventh anniversary of their debut on April 8, 2012, and fans across the globe are helping them celebrate!

Shortly after midnight KST on April 8, EXO-L took over Twitter’s worldwide trends, and as of 1:03 a.m. KST, the hashtags #7YearsWithEXO, #7ogetherWithEXO, and #EXO7thAnniversary had claimed three of the top seven spots on the list. 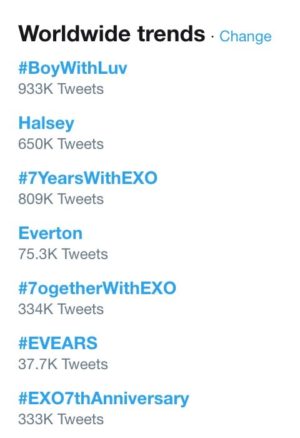 The EXO members also celebrated their special day by each sharing a song that they wanted to listen to with their fans.

Xiumin picked “Don’t Go” from their first album “XOXO (Kiss & Hug),” explaining, “It’s a song that a lot of fans like, and the soft, nostalgic melody reminds me of EXO-L.” Leader Suho chose “Beautiful” from their second album “EXODUS,” writing, “Because the word ‘beautiful’ fits EXO-L the best!”

Lay picked “Call Me Baby” from the same album and commented, “It’s a song that allowed EXO to try many new things and to showcase a more mature side of ourselves. Since both the song and the music video are so cool, I want to listen to it together with EXO-L!”

Baekhyun picked “Love Shot,” the title track of their fifth repackaged album, writing, “It reminds me of how cute EXO-L were, clutching their hearts while watching the [EXO] members dance to the chorus. I was also so thankful that you all waited for us, and it made me think that I want to continue performing happily like this. In the future, I want to show you even more diverse performances and make EXO-L clutch their hearts once again!”

Chen chose “Heaven” from their third album “EX’ACT,” explaining, “It’s the most fitting song for EXO-L, who always give EXO their endless support and love and who makes us feel happy.” Chanyeol picked the group’s prologue single “What Is Love“, sung by members D.O. and Baekhyun. He wrote, “Because it’s the most memorable song! And it was the first song of ours that fans were introduced to!”

D.O. picked their debut title track “MAMA“, writing, “EXO’s debut song. The song that allowed EXO to meet our fans.” Kai chose “Lucky” from their first repackaged album “Growl,” explaining, “Lucky seven fits well with our seventh anniversary! And because I was lucky to be able to meet EXO-L, I want to listen to the fun and exciting song ‘Lucky’ together with all of you.”

Last but not least, Sehun‘s pick was “Peter Pan” from “XOXO (Kiss & Hug).” He wrote, “A song from our first studio album. I want to briefly go back to the past and reminisce about that time.”

Check out some of the celebratory tweets from EXO-L all over the world!

Happy 7th anniversary. Thank you for making my life better, coloring my life, make me always smile. Thank you for everything.
always with EXO to the end❤ I'm EXO-L today, tomorrow, and forever?
WE ARE ONE! #7YearsWithEXO @B_hundred_Hyun @weareoneEXO @layzhang pic.twitter.com/NZz8JzvdpZ

jus to show everyone the best decision i have ever made in my entire life i’ll always be proud of #7YearsWithEXO #7ogetherWithEXO pic.twitter.com/2op900crnq

happy anniversary my love! thank you for everything. you worked very hard and never dissapoint us, exol. we’re so proud and happy to become your fans! let’s be together for the next 10, 20, 30 and even 100 years my love❤️✨ #7YearsWithEXO#7ogetherWithEXO @weareoneEXO pic.twitter.com/hYB6bem9v2