A photo of SHINee’s Minho was revealed by the ROK Marine Corps Education & Training Group!

Minho has a confident expression on his face as he stares into the camera for a group photo with his fellow soldiers. Below is a cropped version of the picture. 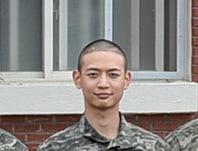 Minho joined the Marine Corps on April 15. EXO’s Suho, TVXQ’s Changmin, Super Junior’s Kyuhyun, SHINee’s Taemin, and several fans were there to see him off.

Ahead of his enlistment, Minho released his first solo track “I’m Home,” which topped iTunes charts around the world.

Are you happy to see how Minho is doing?