Jin Ah Reum told the story of her relationship with actor Namgoong Min!

On the May 9 episode of KBS 2TV’s “Happy Together,” Jin Ah Reum appeared as a guest along with Noh Joo Hyun, Jung Young Sook, Min Woo Hyuk, Kangnam, and Yoon Tae Jin. Jin Ah Reum is currently in a public relationship with actor Namgoong Min. The couple confirmed their relationship to the public in February 2016.

“This is my first appearance on a talk show,” began Jin Ah Reum. “[Namgoong Min] cheered me on by saying that I should just relax and be myself.” MC Yoo Jae Suk made everyone laugh by joking, “Namgoong Min should’ve done that as well. He wasn’t that comfortable here,” and Jin Ah Reum replied, “Namgoong Min told me that Jun Hyun Moo is a good person.”

Speaking about their relationship, Jin Ah Reum said, “We first met through a film. I appeared in the film ‘Light My Fire,’ which Namgoong Min directed, and we became close after being introduced by an acting coach.”

When asked who showed interest first, she said Namgoong Min did so by asking her many personal questions about her siblings and if she had a boyfriend. Jin Ah Reum, however, said that she didn’t share his feelings at the time. “I didn’t have any interest in him at all,” confessed the actress. “It was burdensome. He continued to contact me to see me again. But he turned out to be honest, straightforward, and innocent, so I began to open up.” 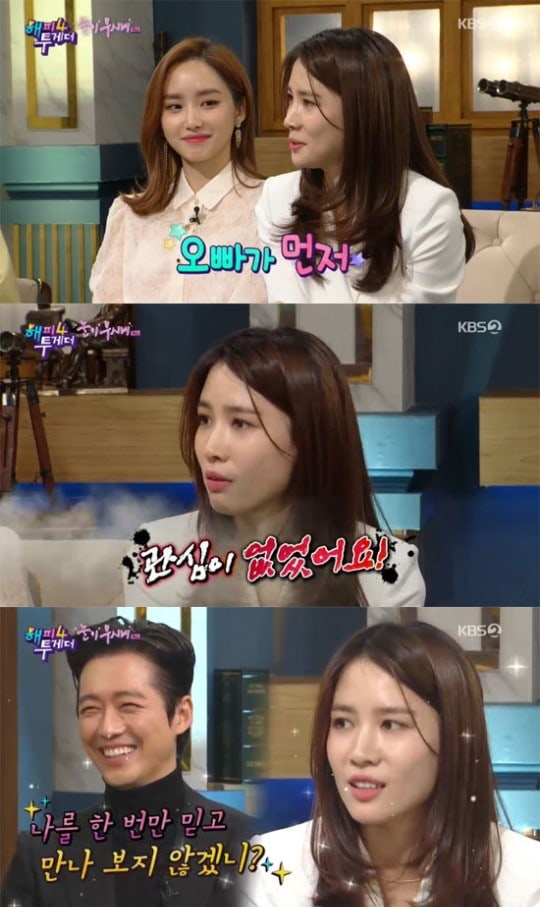 The MCs were curious as to how Namgoong Min confessed his feelings, and Jin Ah Reum revealed, “He sent a text message that said, ‘I really like you. Will you trust me and date me?’ I didn’t respond, but we met up after that. I wanted to joke around so I said, ‘I’m sorry, but I think it would be better to remain as colleagues.’ Acting cool, he said, ‘Okay, but then why did you suggest that we meet up?’ I said that I was just joking, and that was the first day of our relationship.”

Jin Ah Reum added, “He has a strong evil image because of his villain roles, but he’s very cute and innocent in real life. He has a lot of cuteness, even more than I do. You can’t imagine it, can you? He does cute dance moves. He calls me ‘baby’ and I call him ‘honey.'”

She concluded, “Since he’s an actor, he’s very detailed. When he came over my house, he saw that there were many broken things and brought tools with him the next time.”

During his acceptance speech for the Top Excellence Award at the 2017 KBS Drama Awards, Namgoong Min mentioned his girlfriend on stage. She commented, “I watched and didn’t imagine that he would talk about me. He said, ‘Thank you Ah Reum, and I love you.’ I had witnessed how hard he worked so I burst into tears. My older sister next to me also sobbed.”

Jin Ah Reum
Happy Together
Namgoong Min
How does this article make you feel?