Lee Jong Soo spoke candidly about his marriage and various accusations against him in a new interview.

In March 2018, Lee Jong Soo was sued for fraud for not showing up to a wedding he promised to host alongside additional claims of other types of fraud. At the time his agency was unable to reach him, apologized, and the lawsuit was later retracted after the individual suing the actor reached an agreement with his family.

On May 22, Korean-American news network USKN News posted a video covering allegations about the actor and an interview with him on its YouTube channel. The full interview clip was also given to MBC’s “Section TV” for its May 23 broadcast.

USKN reporter Kwon Hyuk visited Lee Jong Soo at a casino near Los Angeles where the actor was working. The reporter directly asked the actor questions about his marriage, divorce, and debt. USKN reported, “When Lee Jong Soo was promoting in Korea, he was known as an unmarried man. But in reality, Lee Jong Soo got married in 2012 and continued living a married life.”

The news network also raised speculations about his marriage. When they asked Lee Jong Soo when he received his green card, he replied, “I got married in 2012.” When the reporter commented, “I’m sure it’s not, but it’s a situation that appears fake,” Lee Jong Soo said, “What am I to do if that’s how you perceive it?” About his divorce, he continued, “It felt as if she was being held back because of me when she’s still young and can meet a better person than me.”

USKN continued that Lee Jong Soo is currently living with a woman of the last name “Kim” and that according to an informant, the actor did not repay the $16,000 that he and Kim borrowed from someone. He was also accused of borrowing and not repaying about 500 million won (approximately $420,200) from acquaintances who visited the casino. In addition, he reportedly was delayed in paying his employees while running a business managing tables at casinos. Lee Jong Soo denied this, saying, “It’s something I don’t know about.”

The reporter followed up, saying, “People have said that Kim, the woman you live with, borrowed the money and that you used the money with her, so how could you not know.” Lee Jong Soo replied, “That’s what I’m the most upset about. People say Lee Jong Soo, Lee Jong Soo about anything. I just want to live as an ordinary person,” and emphasized that he had never borrowed money. 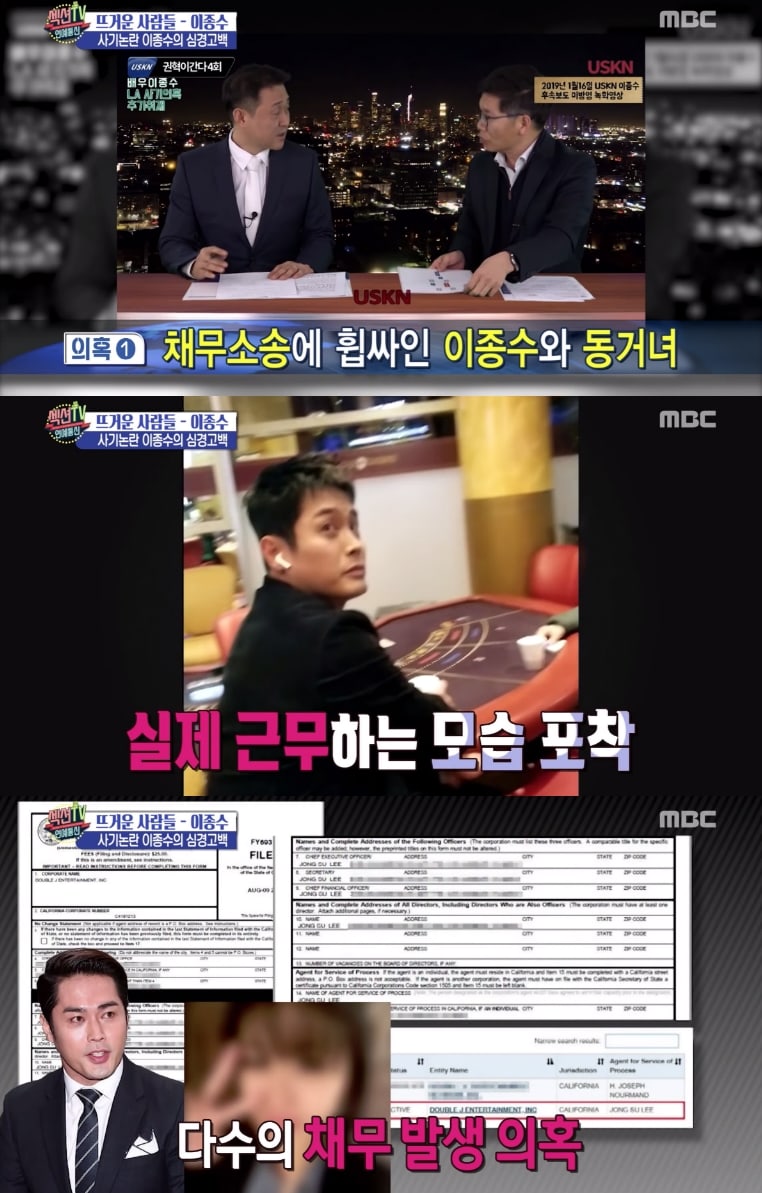 About the delayed payment of wages of his employees, Lee Jong Soo answered, “The employees said they didn’t get their wages? Wages can be delayed. I receive checks (from the casino) and try to pay all of it with that. As you may know about California’s labor laws, you can’t not pay (wages). If the check bounces, I also give them the bounce fee.”

When asked about his divorce, Lee Jong Soo evaded the question and asked who told the reporter this information. He then said, “I got married in 2012,” and said that he secretly got married to a U.S. citizen named “Lee.”

He explained, “It’s true that I got married secretly since I’m a celebrity. I got married, but there were things that she and I were uncomfortable about since I’m an actor, so I didn’t talk about (my divorce). Since I was traveling back and forth between the United States and Korea, we became distant and my wife had a hard time.”

After stating that Lee Jong Soo had been married for three years before his divorce, the reporter said that Lee Jong Soo’s name came up while he was reporting on fake marriages and that his situation seemed to fit the description for one.

Lee Jong Soo, however, denied the suggestion that he got married to obtain a green card. He said, “Do I have to come on TV with my ex-wife and explain every little thing? Why do people around me have to be harmed because of me? What does that make her?”

When asked if he repaid the money, Lee Jong Soo replied, “I was repaying it and then that person (creditor) disappeared. That person is actually a private moneylender, and they disappeared. I looked into it and the situation became really bad, so I don’t know what happened to that person, but they’ve disappeared.”

Lee Jong Soo was also accused of debt accrued due to gambling. The actor denied this, saying that he thinks the creditor made up this story and that he would’ve been caught if it was true. “What would be the reason that I work at a casino despite hearing those things?” said the actor. “It’s because it’s not true, and working in a casino is legal in the United States. Am I supposed to not work and hang out? I have to work to live. I have to earn money and pay rent and lease. The United States is that kind of place. No one gives me money for staying still.”

“Am I someone that great?” concluded Lee Jong Soo. “The most shocking thing was that no one was interested in me when I was in Korea. I had never thought that I had a big impact on the public or that I was receiving a lot of attention. [Acting] was my job and a job that I liked. But what I was surprised about when I came to the United States was, ‘Am I really the object of attention?’ I’ve lived for 45 years and I just want to live quietly before passing.” 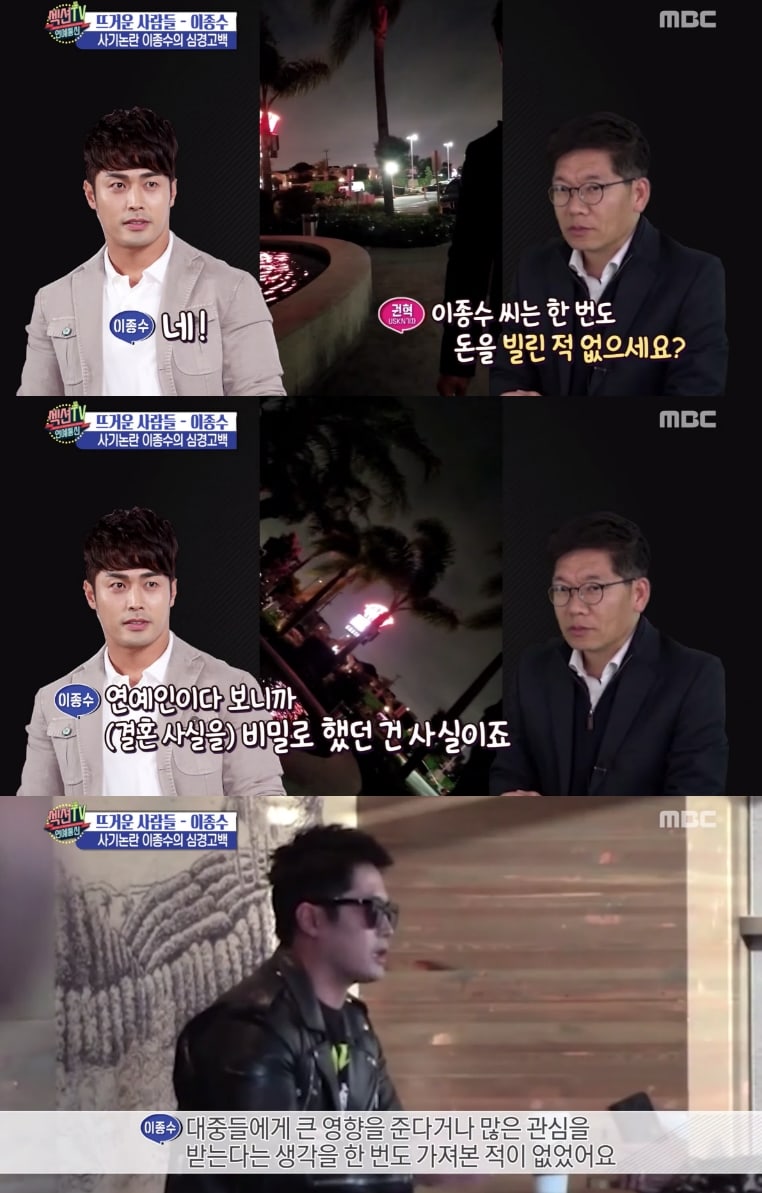 Lee Jong Soo
Section TV
XPN
How does this article make you feel?