Kim Jung Hwa truly has been blessed with amazing co-stars throughout her career!

The actress was a guest on the May 23 episode of KBS’s “Happy Together 4” alongside Jung Young Joo, Lee Joo Bin, Heo Song Yeon, and AOA’s Hyejeong.

During the episode, the hosts brought up Kim Jung Hwa’s popularity during the 2000s. Jun Hyun Moo asked her, “You were incredibly popular then. How was the payout?” She shared, “Once, I filmed 17 commercials at one time. It was enough money to buy around five houses in Gangnam at the time.” When Yoo Jae Suk asked her if she was still that wealthy, she wittily answered, “I’m wealthy even if I don’t have money.” 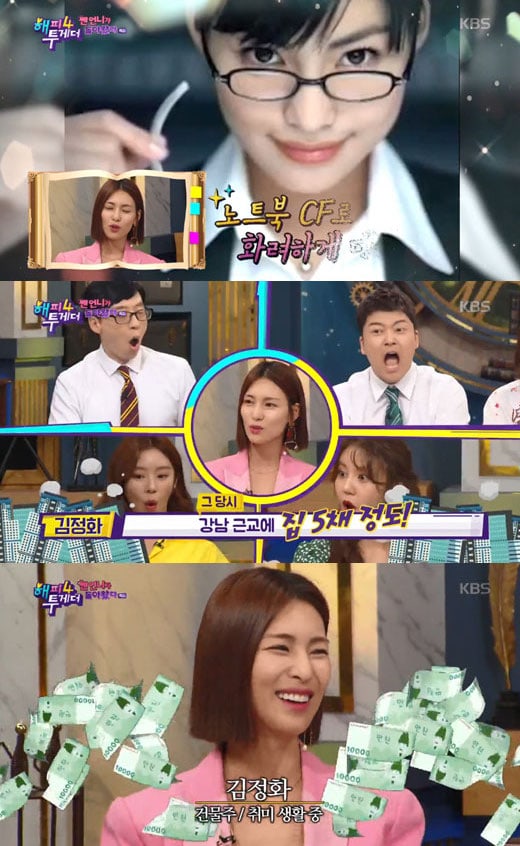 Yoo Jae Suk brought up her previous works, saying, “Kim Jung Hwa’s most famous work is ‘New Nonstop.’ At the time, there was a scandal with Jo In Sung.” Kim Jung Hwa explained, “I debuted through ‘New Nonstop.’ I filmed a telecommunications commercial with him once before. But we weren’t even dating in the drama, so we both didn’t understand why we had a scandal. We laughed it off.”

Kim Jung Hwa shared that the “New Nonstop” cast had recently met up for the first time in 18 years, including Park Kyung Lim, Jang Nara, Jo In Sung, Jung Tae Woo, and Yang Dong Geun. She said, “It was really nice. The sitcom is like family to me. We all made our debuts through ‘New Nonstop.’ It was the first time for every one of us and we were all clumsy rookies. We all easily agreed to meet up and even though it was the first time we met in 18 years, everyone was the same.”

She picked Yang Dong Geun as the one who had changed the most, saying, “Before, he was so into hip hop, where he talked a lot when we acted but in private he always pushed his hat down all the way. Now, he’s so bright. Maybe it’s because he’s married and has kids. Before, he was someone in the darkness but now he’s smiling and he talks a lot.” 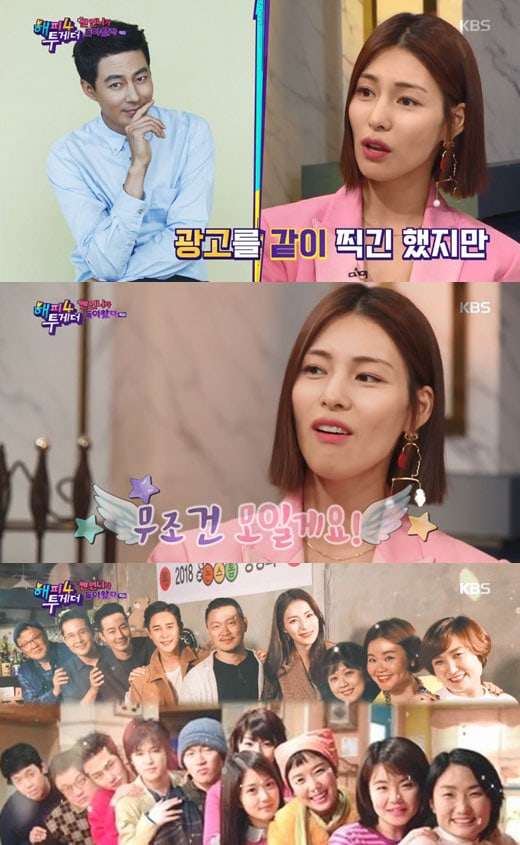 Kim Jung Hwa added, “We made a group chat. Jang Nara did a drama a while ago and we told her she was pretty. We also talked about how we should gather again, and that we should film us graduating [college], getting married, and having kids. We even said that the only person that has to say okay is Jo In Sung because of his appearance fees, but he said, ‘Of course I’d want to.’ I really hope it happens.”

She then talked about her other previous co-stars, which includes Kang Dong Won, So Ji Sub, and Gong Yoo. She first mentioned Kang Dong Won, with whom she filmed the drama “Something About 1 Percent.” She explained, “We were the leads so we had a lot of scenes together. I was filming on a hill and a parked car’s brake got undone or something, and it started coming down. Kang Dong Won blocked it out of nowhere, like Superman. That was really cool, it made my heart flutter.” She made the others laugh by adding, “He wasn’t able to stop it, and he ended up getting dragged by it.”

Kim Jung Hwa added, “You normally get close when you film a drama together. That’s how the acting gets better. At the time, I was in my early 20s and Kang Dong Won had just debuted. We were both introverted. We filmed scenes where we dated, got married, and got pregnant, but it was so awkward. We even had a scene where we went on our honeymoon and hugged while talking in front of a campfire. But we were so formal when we hugged. At the wrap-up party, we greeted each other with a 90-degree bow. I’m a bit sad that we weren’t able to get close.” 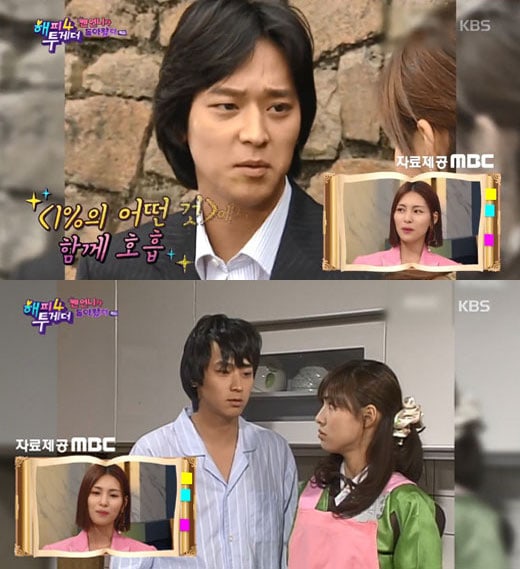 Kim Jung Hwa brought up Gong Yoo, with whom she had filmed the movie “Spy Girl” with. She shared, “He was so extroverted. He took care of me, joked around, and we ate meals together. I was awkward, but as time passed we became close. We even went to famous eateries as we went to promotional events for the film.” She laughed and added, “Even though he’s become the ‘Goblin‘ now, we were close then.”

She chose So Ji Sub as the co-star who had given her butterflies the most, saying, “I filmed a beverage commercial with So Ji Sub. At the time, he asked me, ‘What are you going to do later?’ so I answered, ‘I want to act.’ He said that he’d like to meet me in a project in the future. After that, I acted as siblings with him in my first drama ‘Glass Slippers.’ When I asked him if he remembered me, he said he did. He’s really handsome and polite in real life.” 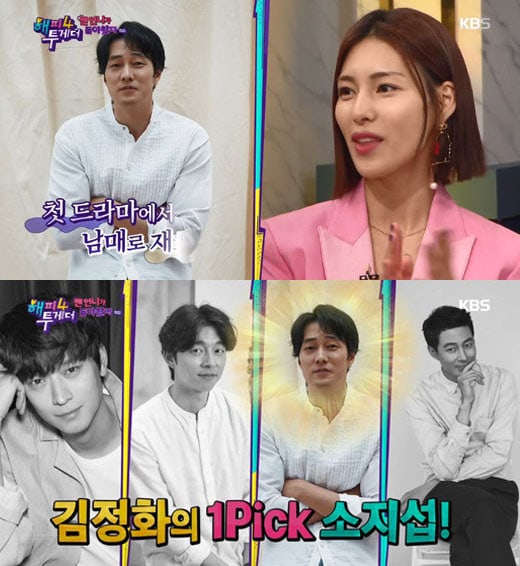 If you haven’t already, check out the episode below!

Gong Yoo
Jo In Sung
Kang Dong Won
Kim Jung Hwa
So Ji Sub
Happy Together 4
How does this article make you feel?