On May 25 and 26, thousands of passionate K-pop fans descended onto the area surrounding Singapore Sports Hub to enjoy two days of Korean pop music and culture.

HallyuPopFest 2019 included a new addition this year: HallyuTown, a town square with booths featuring the latest Korean trends in food, beauty, and fashion, as well as various fan activities. Especially popular was the Random Play Dance, where fans had the chance to join mobs of other fans to perform cover dances of popular K-pop hits.

There was a lot for K-pop fans to take in on Day 1, starting with the red carpet:

The first group to walk the red carpet was GWSN. The rookie girl group from Kiwi Pop looked gorgeous in their matching black-and-white outfits. 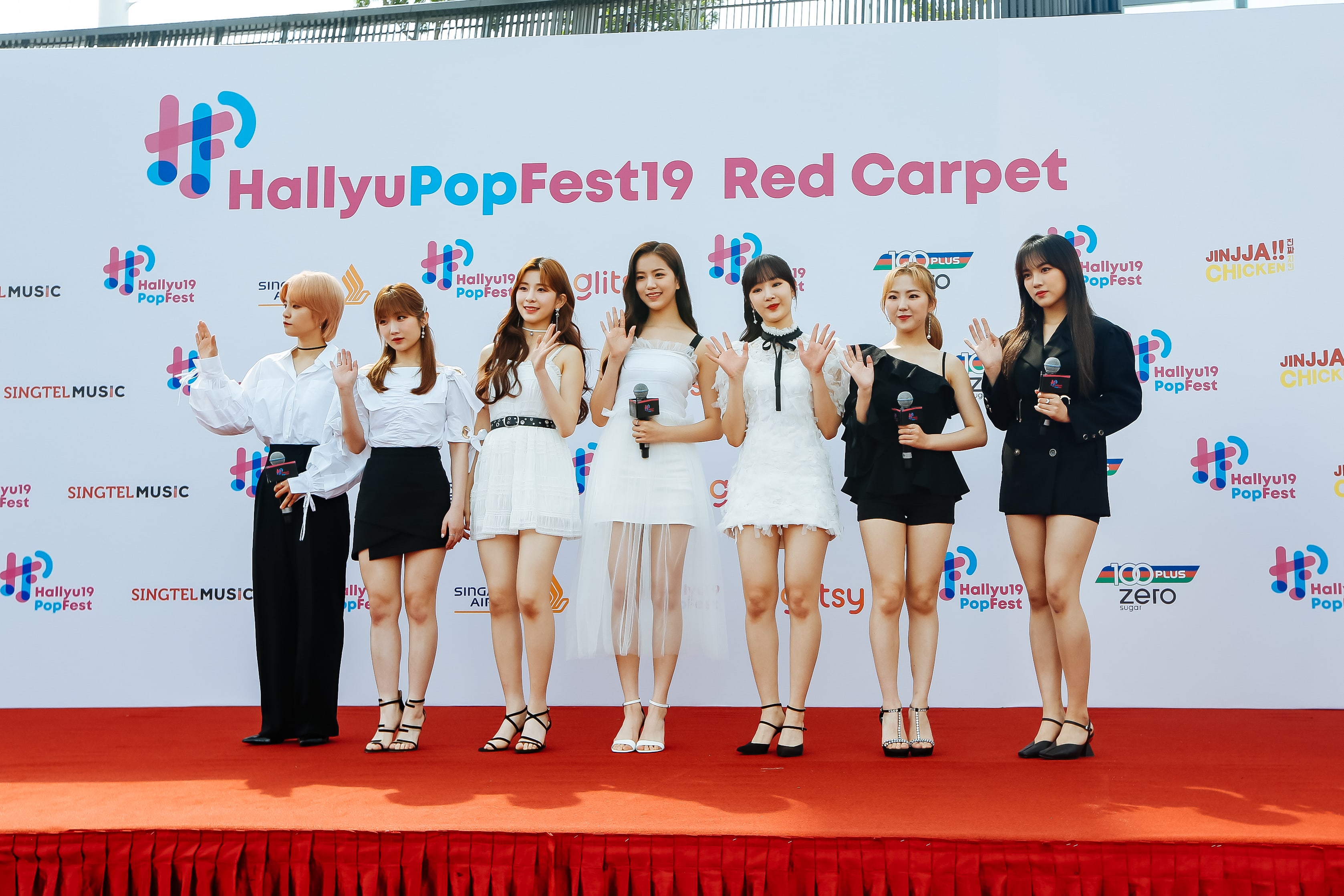 Next was A.C.E (who was missing member Wow, who couldn’t make the trip). The kings of intense choreography stood out on the red carpet in their red-and-black, army-inspired get-ups. 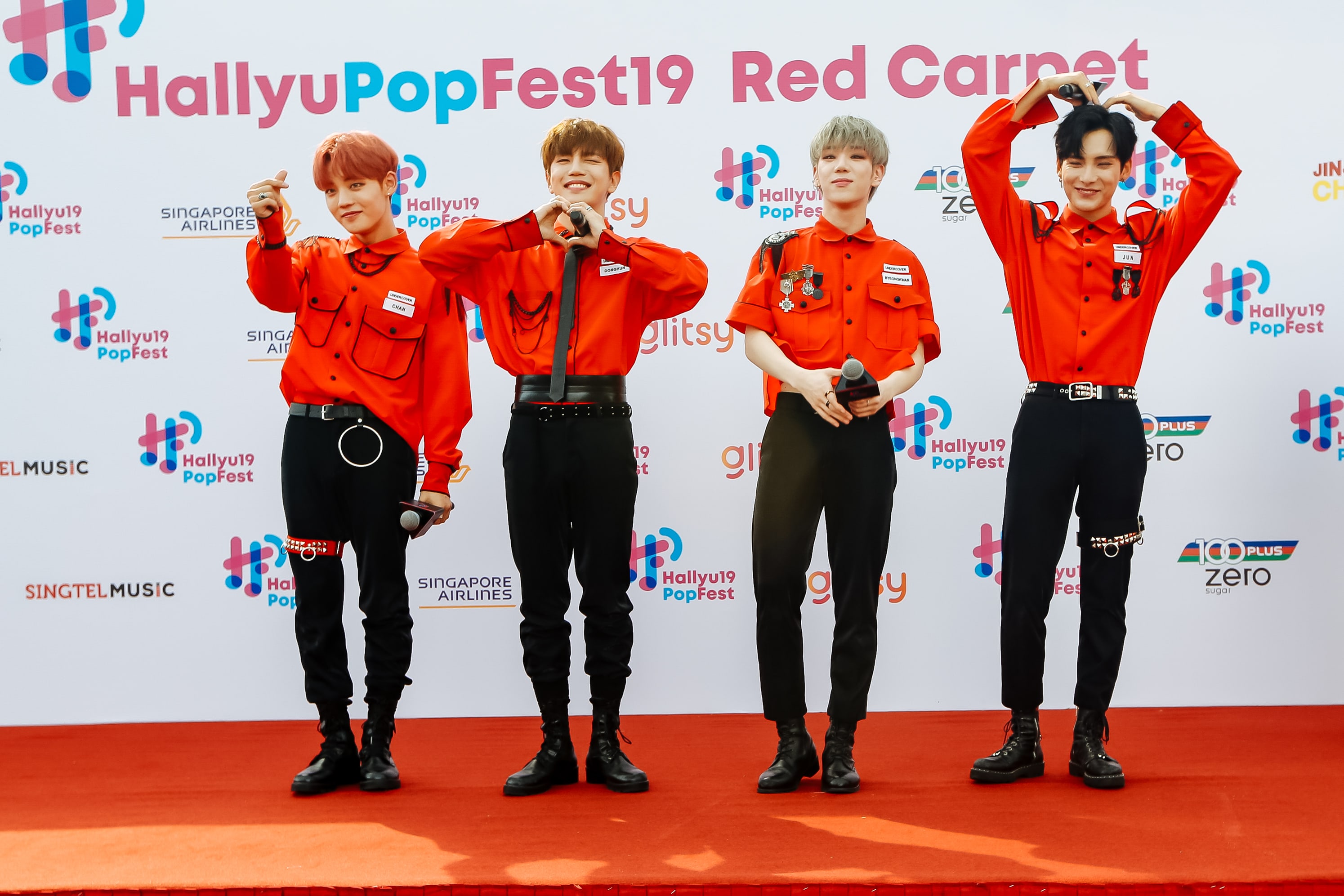 The always energetic band N.Flying was next, and they posed for the cameras in a colorful array of outfits. 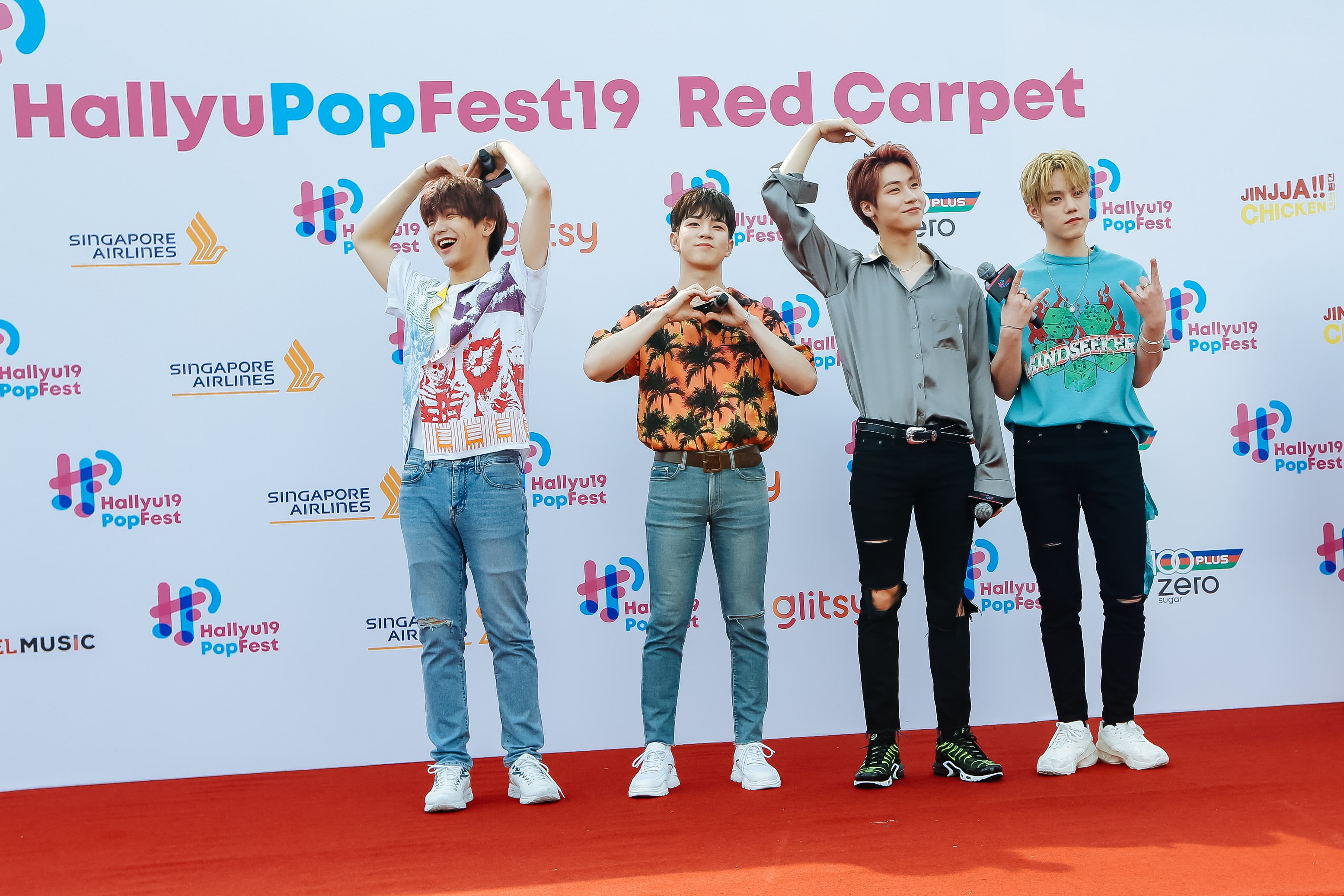 Next up was Oh My Girl, who is in the midst of promoting their first studio album “The Fifth Season.” WM Entertainment’s “concept fairies” stunned the crowd in red dresses. 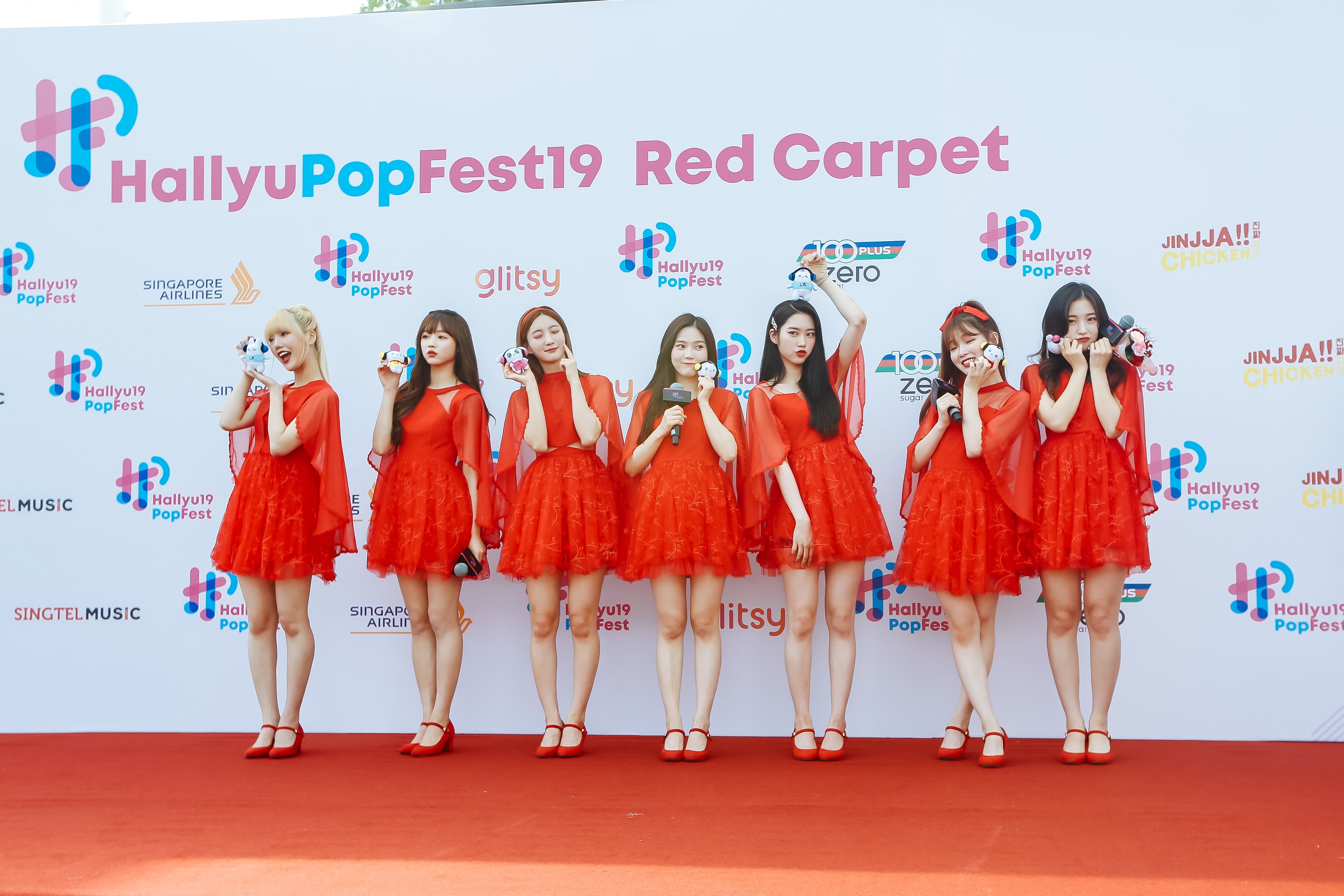 NU’EST, the next group to walk the red carpet, received the loudest cheers from the assembled crowd. 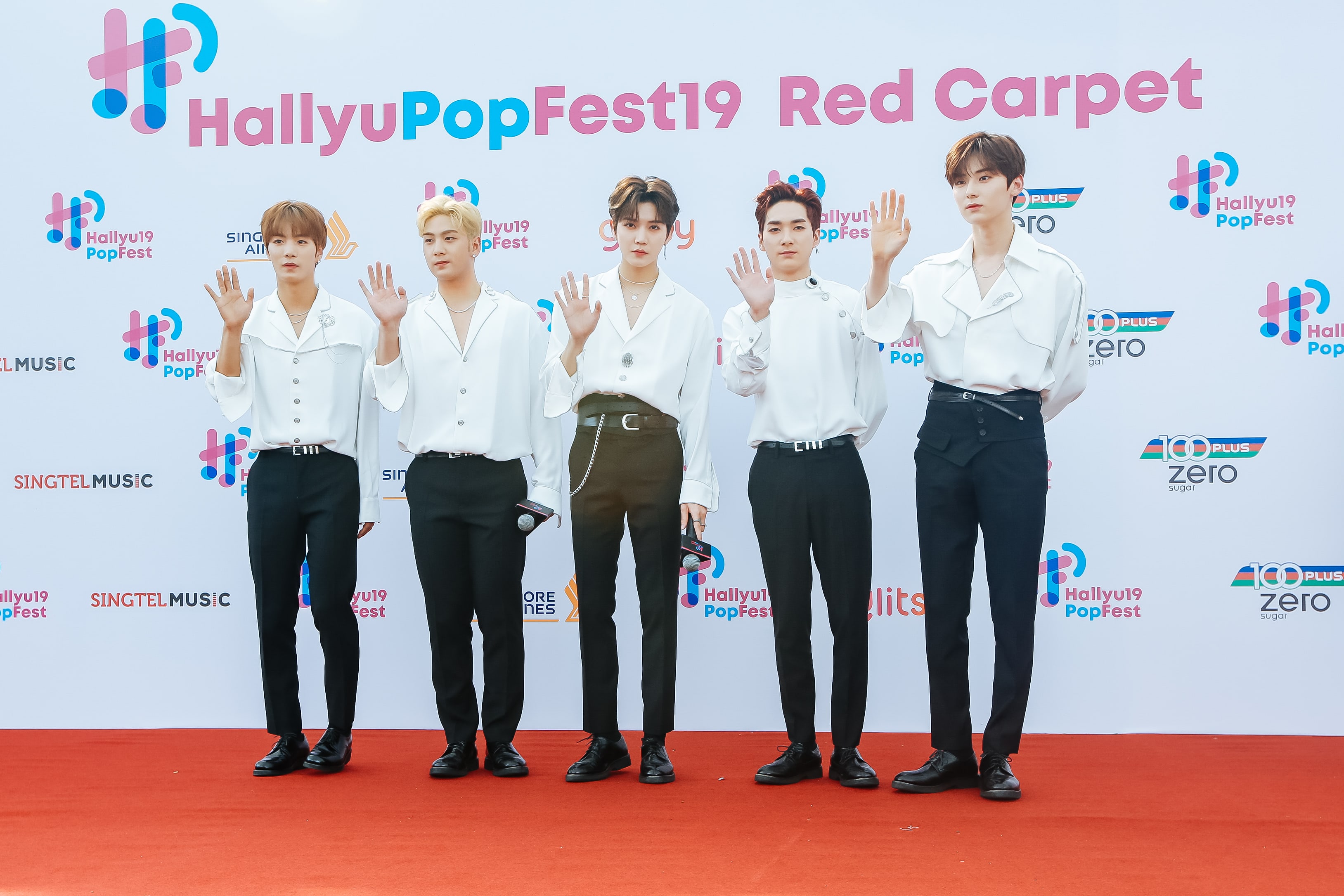 Hyolyn, the only soloist to walk the red carpet on Day 1, greeted the crowd in a simple but elegant outfit. 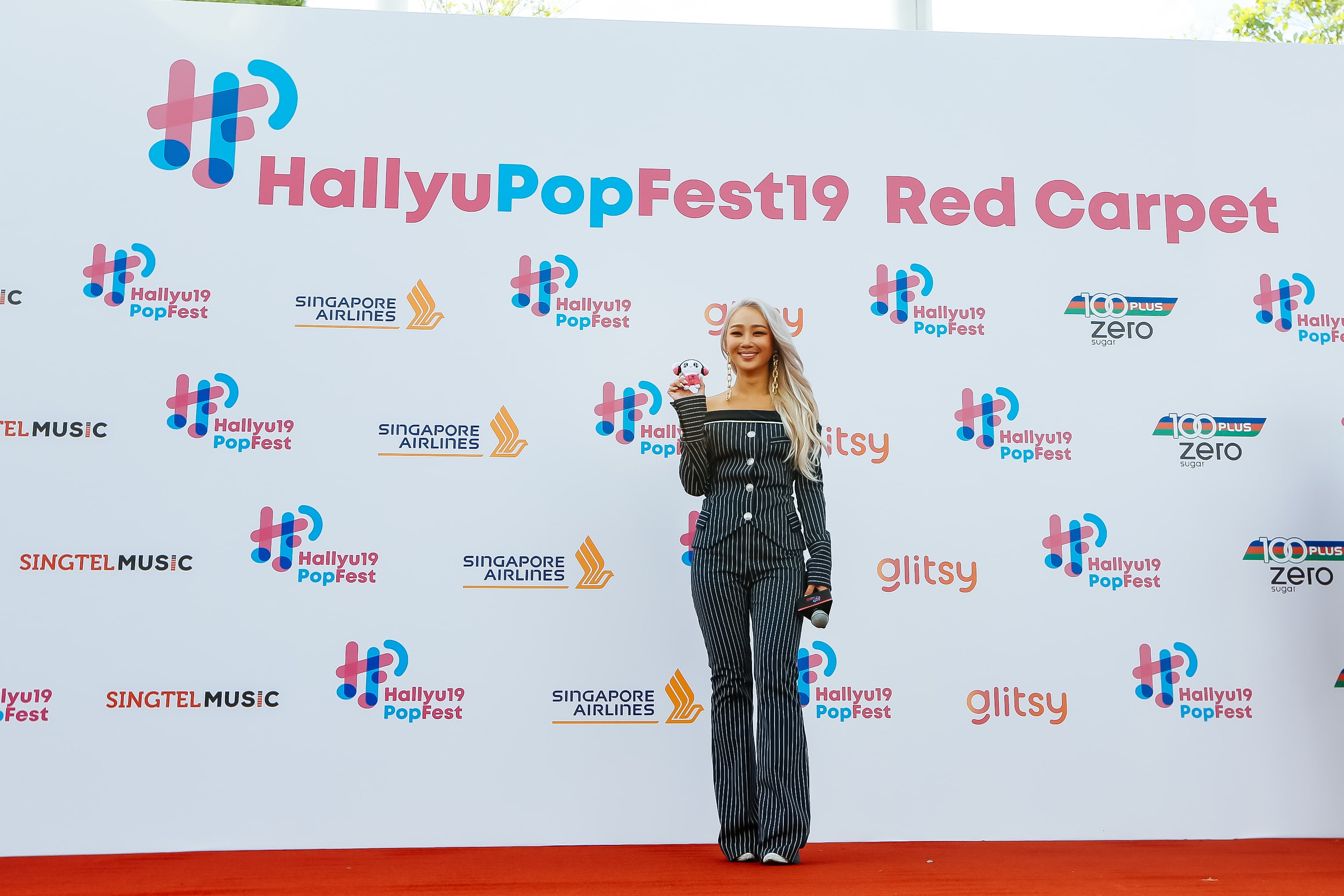 WINNER was the final artist to walk the red carpet, and they won over the crowd with their charisma. 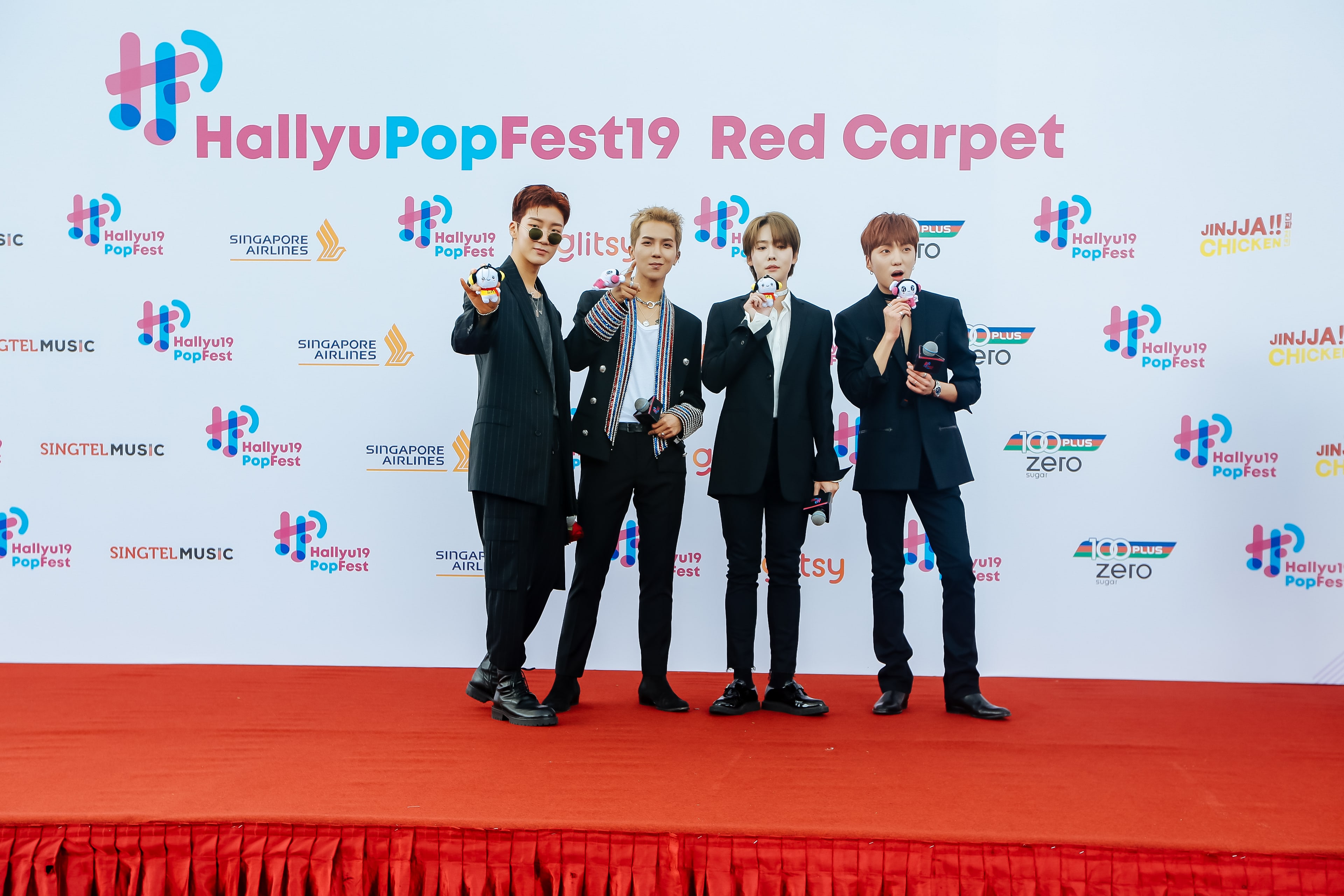 GWSN also demonstrated their language skills throughout the event: their youngest member Lena, who studied in the United States, spoke to the audience in fluent English without needing a translator. Meanwhile, SoSo, who is Taiwanese, addressed their fans in Mandarin.

In keeping with HallyuPopFest tradition, the girls took on the challenge of a random dance mission and flawlessly performed cover dances of MOMOLAND’s “BBoom BBoom,” Wanna One’s “Energetic,” and BLACKPINK’s “As If It’s Your Last.” 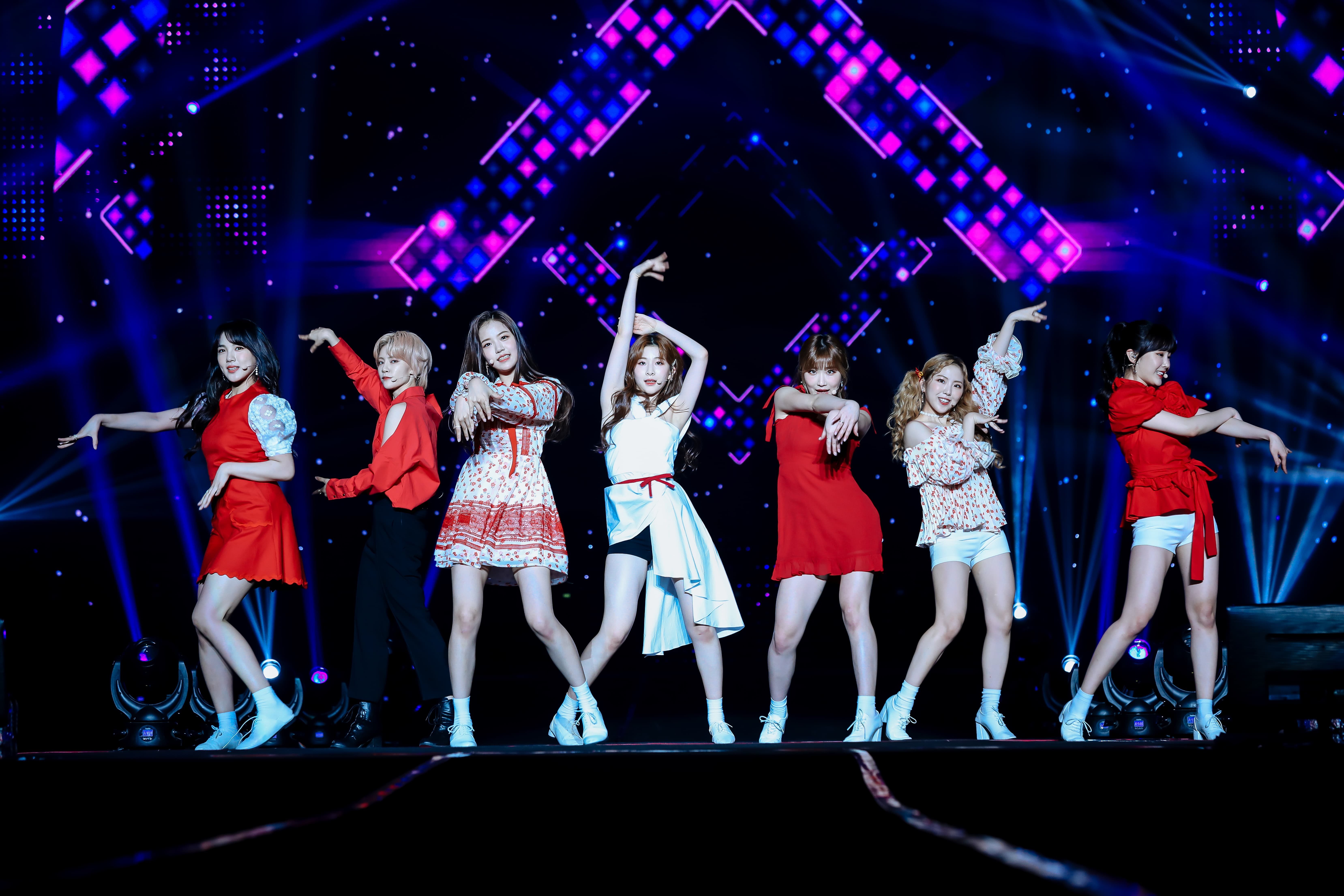 Next, the four members of A.C.E (minus Wow) took the stage to dazzle the crowd with their precision and high-energy choreography, performing their hits “Cactus,” “Callin’,” “Take Me Higher,” and “Under Cover.”

As if to show that their talents weren’t limited to dancing, the group also prepared a special live cover of JJ Lin’s “Always Online”, mesmerizing the fans with their strong vocals. 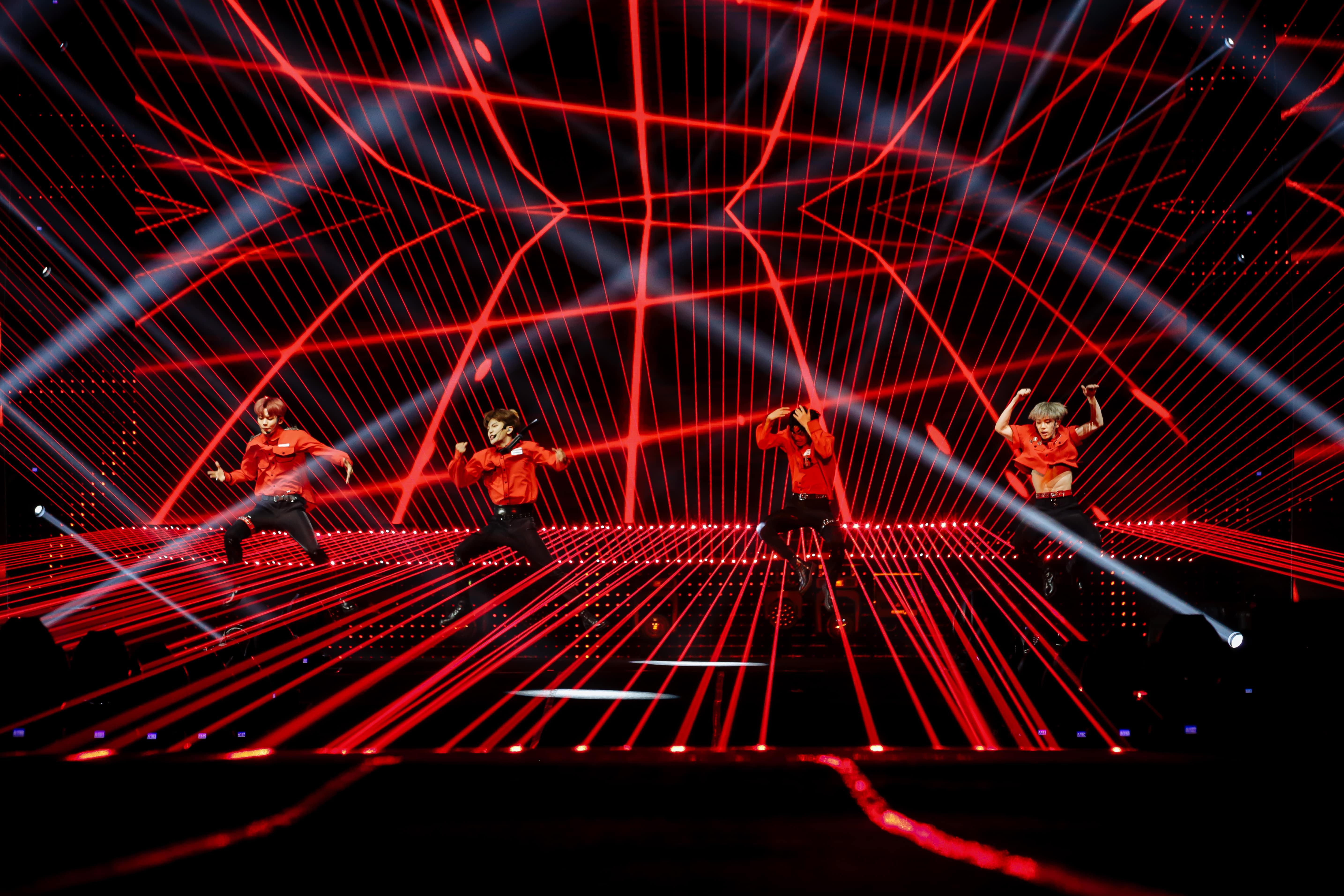 There was also a lighter side to A.C.E’s stage as well, with the members facing off in an “aegyo battle.” Because no one ended up winning the battle, all of the members had to perform a sexy dance to Camila Cabello’s “Havana” as a penalty. To the audience’s delight, the four idols happily obliged.

First up to bat at Day 1’s Evening Concert was N.Flying, who kicked off the night with a collection of their most popular hits, including “How R U Today,” “Leave It,” “Rooftop,” “Flowerwork,” and “The Real“. They also performed an extra-special rendition of “Spring Memories,” in which they asked the audience to join in by turning on their cell phone flashlights and waving them in time to the music.

Next, as the staff was clearing the stage of N.Flying’s band equipment, Afternoon Showcase performers GWSN made a surprise appearance at the Evening Concert, repeating their performances of “Pinky Star” and “Yolowa” on the center stage. 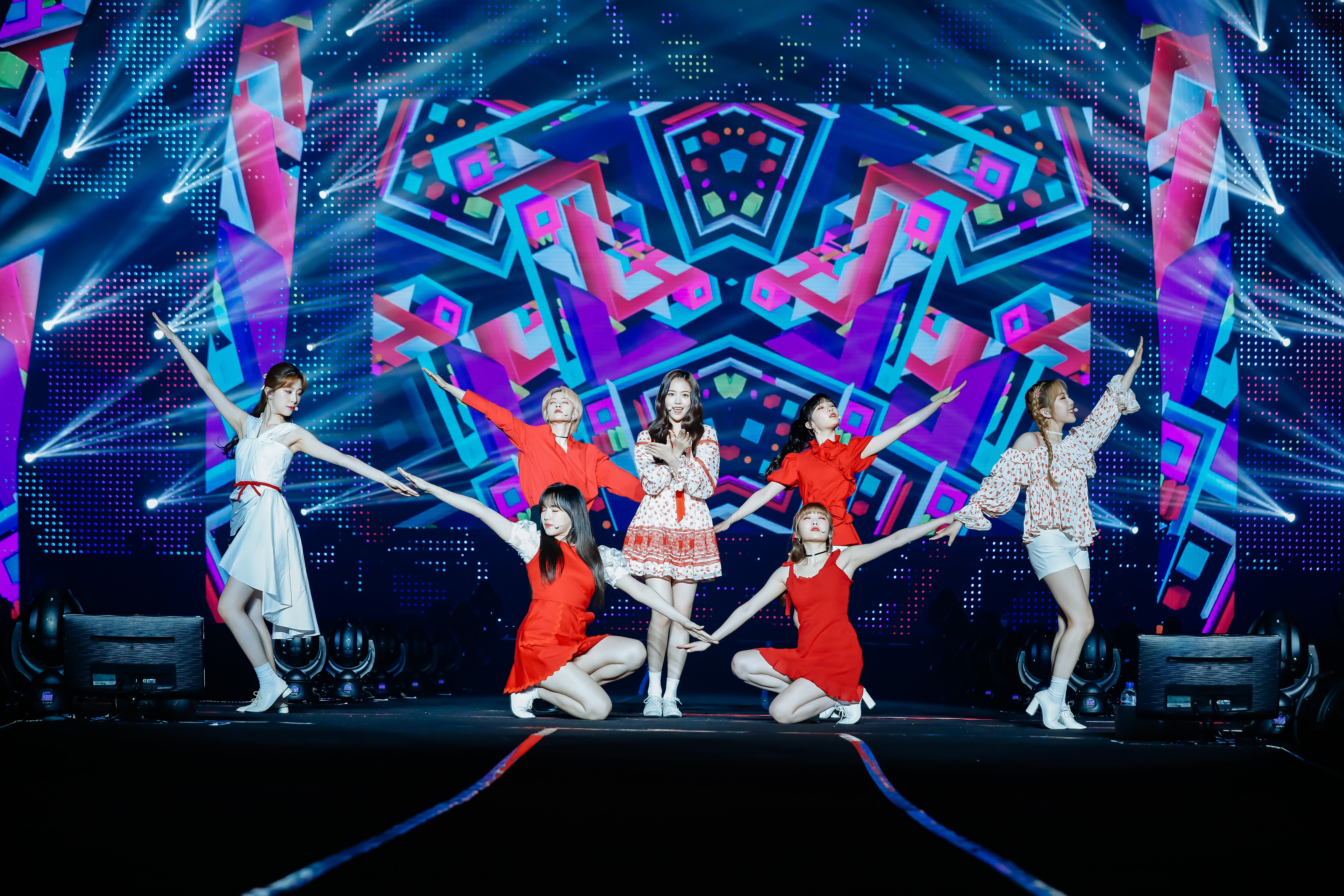 Oh My Girl was the next artist to take the stage. The versatile girl group started their performance with “SSFWL” and continued with a set list of fan-favorite songs including “Love Speed,” “Liar Liar,” ” Secret Garden,” and “Real World.” Finally, they walked off the stage to their 2018 hit “Remember Me.”

Notably, almost all of the members of Oh My Girl chose to use handheld microphones during their performance, and the girls—especially main vocals Hyojung and Seunghee—seemed determined to entertain their fans with their powerful live singing on top of their flawless dancing. 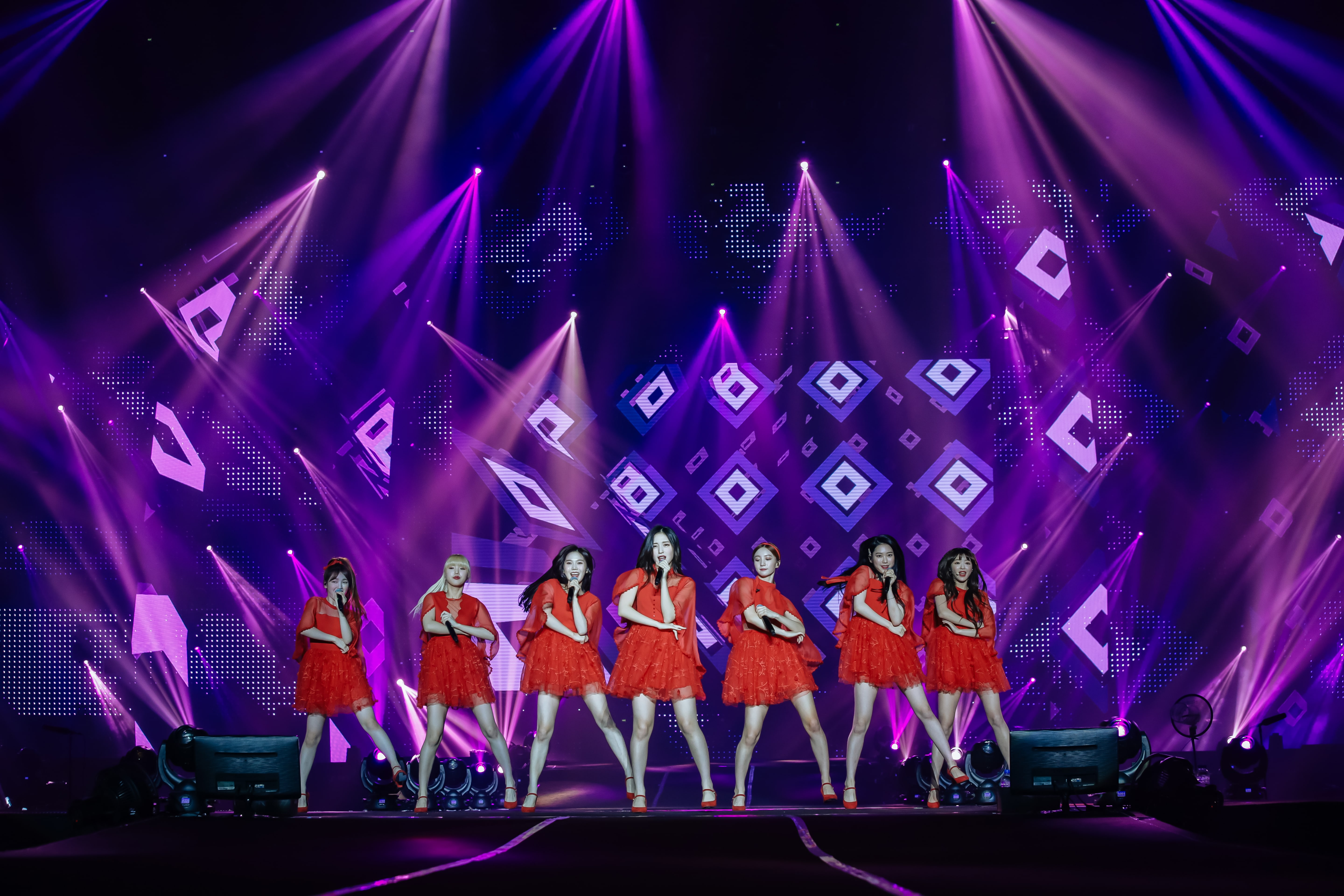 Following Oh My Girl was NU’EST, who received the loudest cheers of the night from their fans in Singapore. Their set list included their hits “Hello,” ” BET BET,” “Love Paint,” “Segno,” and “Look (A Starlight Night).”

Since it was just a few days after NU’EST member Aron’s birthday, the fans in the audience also took the opportunity to sing “Happy Birthday” to him while he was on stage. 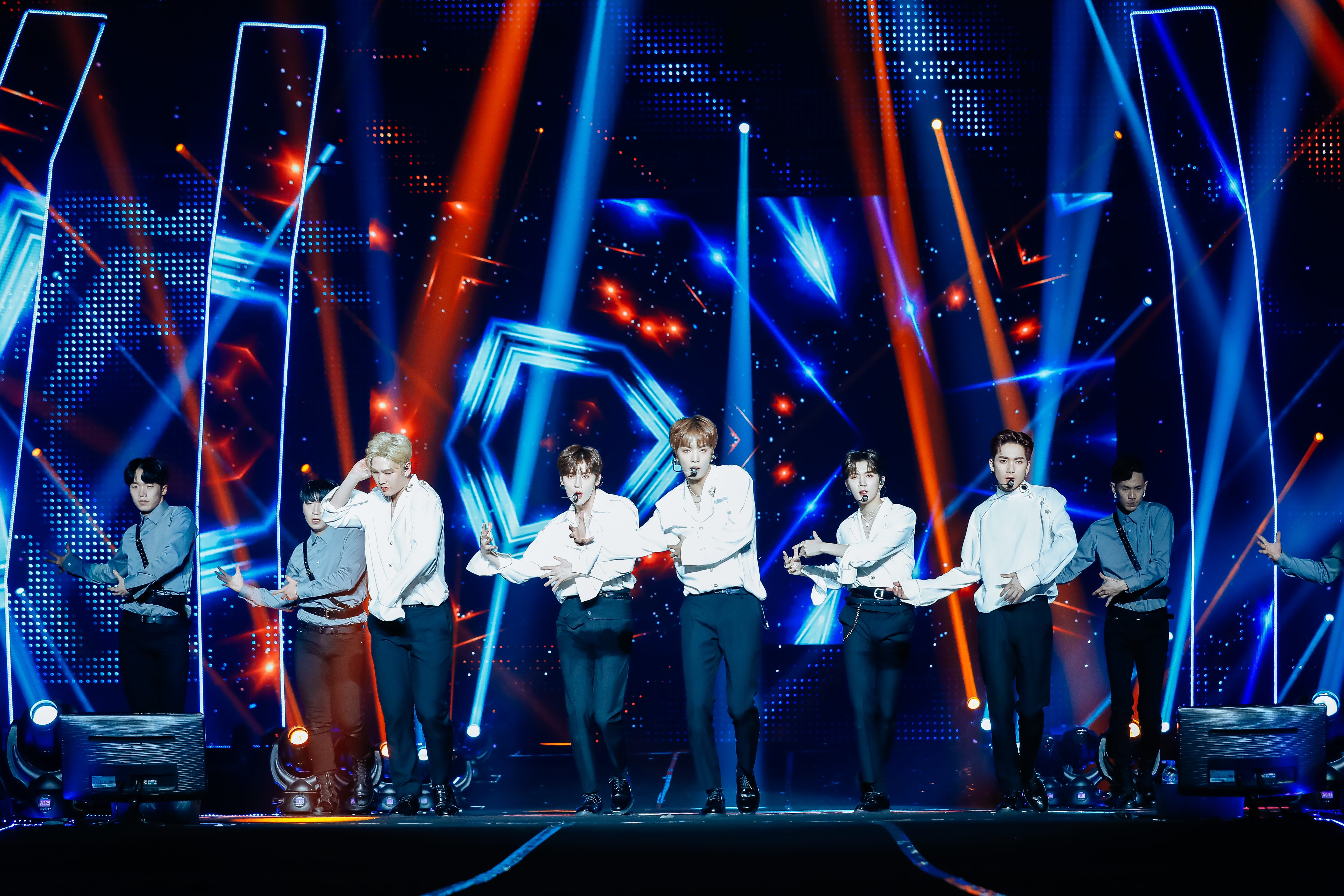 Next up was Hyolyn, the former leader of the popular girl group SISTAR. The singer sang a medley of her greatest hits, including “Paradise,” “See Sea,” “Good Bye,” “Blue Moon,” “Dally,” and a special version of SISTAR’s “Shake It.” 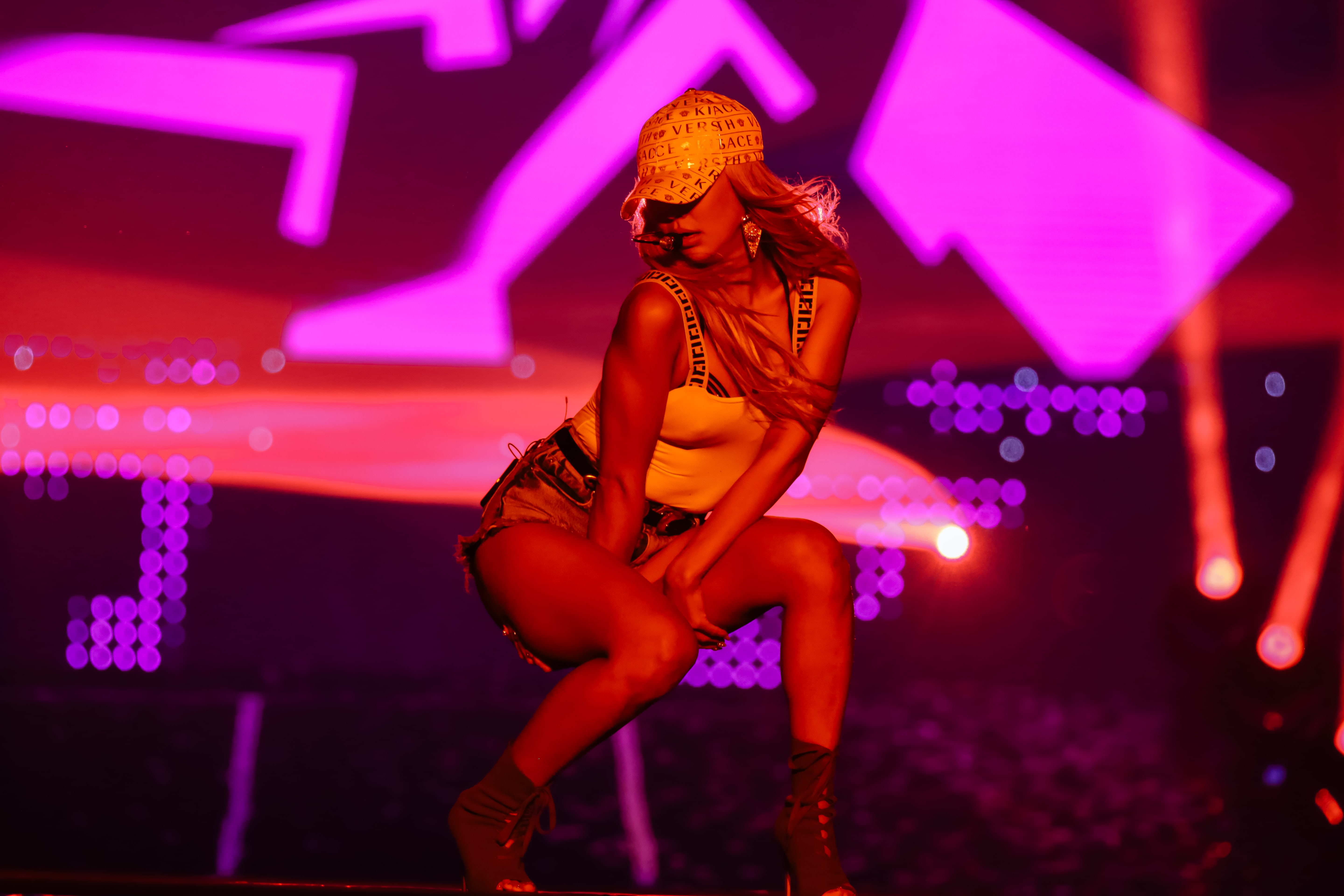 Finally, WINNER wrapped up the night as the closing act. HallyuPopFest marked their second time performing in Singapore, and they expressed their love for their Singaporean Inner Circle by performing many of their fans’ favorite songs, including “Love Me Love Me,” “Ah Yeah,” “Empty,” “Everyday,” “Millions,” and “Really Really.” 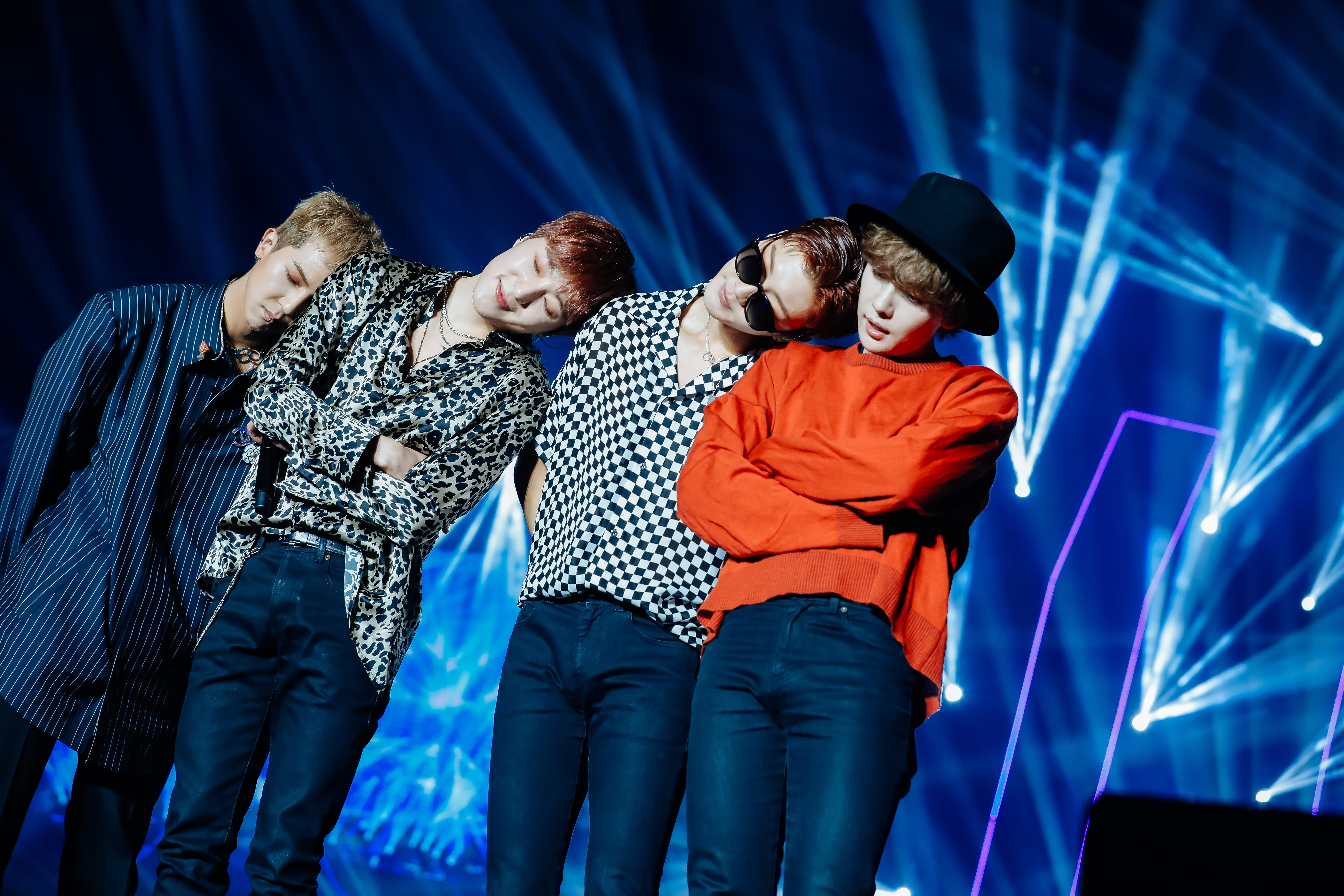 Stay tuned for coverage of Day 2 of HallyuPopFest 2019!

All photos courtesy of HallyuPopFest.