The chairman of Namyang Dairy Products has issued an apology regarding the recent controversies surrounding his niece, Hwang Ha Na.

The full statement is below:

I bow my head to sincerely apologize for the fact that my niece recently caused trouble with her immature actions.

Hwang Ha Na is only a relative, and she doesn’t have any relationship with the business or any matters of Namyang Dairy Products. Despite this, I feel terrible for causing harm to the executives and staff members, franchise stores, and consumers who purchase Namyang Dairy Products’ goods.

Regardless of my embarrassment, I give the citizens and Namyang Dairy Products my sincerest apology and earnestly ask for your forgiveness.

I will deeply reflect and humbly fulfill all of my social responsibilities and duties. 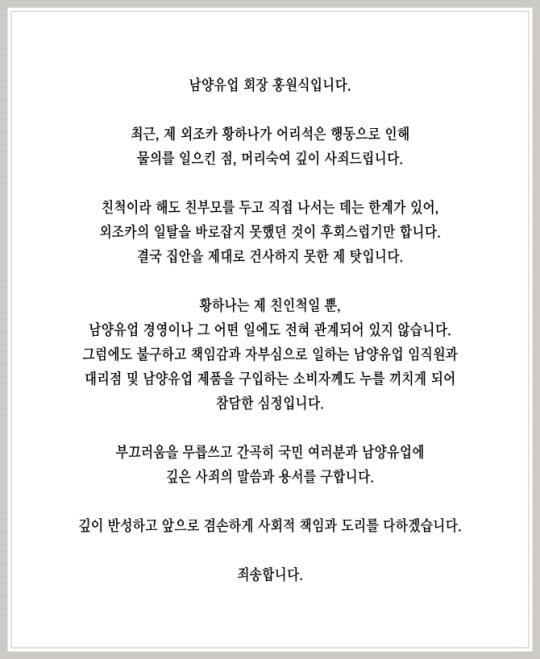 Hwang Ha Na is the granddaughter of Hong Doo Young, the founder of Namyang Dairy Products. The company previously clarified that she had no relationship with the management of the company and that no one in her immediate family had jobs or stocks within the company.

In April, she was arrested after the police suspected her of injecting Philopon (a form of methamphetamine) several times at her home in Seoul as well as using a psychotropic drug with elements of Clonazepam in April 2018 without a prescription.

She was also accused of receiving favorable treatment due to her connections. In 2015, she was recommended for non-indictment on suspicions of drug use, due to a lack of evidence. It was later reported that she bribed a friend to take the fall instead and the officers working on that case were charged for dereliction of duty.

After her recent case was forwarded to prosecution, she accepted a majority of the charges against her at her first trial on June 5. Hwang Ha Na’s next trial will be held on June 19.

Hwang Ha Na
XPN
How does this article make you feel?