In the early morning of June 14, Han Seo Hee posted on her Instagram and shared her thoughts about the current controversy.

The day before, former YG trainee Han Seo Hee was reported to be informant “A” who allegedly spoke with B.I in messages in which he asked her to obtain illegal drugs for him. She later confirmed with MBC’s “Newsdesk” that news reports about Yang Hyun Suk intervening in the matter were true.

It was previously reported that lawyer Bang Jung Hyun submitted testimony on the informant’s behalf to the Anti-Corruption and Civil Rights Commission. On June 13, “KBS News” reported that “A” had stated in this testimony that YG Entertainment founder Yang Hyun Suk had threatened them to change their testimony about B.I and appointed a lawyer for them. After meeting with Yang Hyun Suk, “A” changed their testimony to say that B.I had not used drugs.

A source from the police has stated that they cannot confirm the identity of informant “A.”

I’m overseas. I’m doing well. I’m going to return to Korea in two days. Don’t worry. To be honest, I didn’t know that my name would become known so quickly. It’s true that I’m surprised and scared. But I’ve made up my mind, so there’s no need for worry.

Also, there’s something I want to say. It’s true that I’ve lived recklessly, done what I felt like, and said and done things that other people might be upset about. I acknowledge that and am reflecting on myself.

Han Seo Hee was previously also involved in T.O.P‘s marijuana case, and she was indicted for smoking marijuana with T.O.P twice in October 2016. In addition, she was accused of purchasing LSD on two separate occasions. Han Seo Hee was sentenced to four years of probation with the possibility of a three-year prison sentence if she commits a repeat offense during her probation period, and she was also ordered to carry out 120 hours of drug rehab. She has since also been criticized for controversial comments and actions.

In the comments for the above post, Han Seo Hee added the following statement:

If I can add something, this isn’t a plea for a lighter sentence. The August 2016 case about marijuana and use of LSD and the October 2016 case of using marijuana with T.O.P were combined, and I’m currently receiving my punishment. The cases were merged.

I don’t sell, I deliver. After using money out of my own pocket to make a purchase from the dealer, I then handed [the product] to Kim Han Bin (B.I) at the same price.

People say it’s a sales tactic, but if you think about it, it’s not. I don’t see any profit. This will be revealed later through a proper interview. If there’s going to be a reinvestigation of the [drug] delivery, then I will faithfully cooperate with authorities. The focus should be Yang Hyun Suk personally interfering in this case, making threats, and making deals with police, but I’m worried that just because my name has been revealed as the informant [‘A’ in previous articles], the focus is now all on me.

I’m asking that you see myself and this case as separate.

And I don’t know that it matters if I say this now, but I tried to stop Kim Han Bin to the end, to not do it. 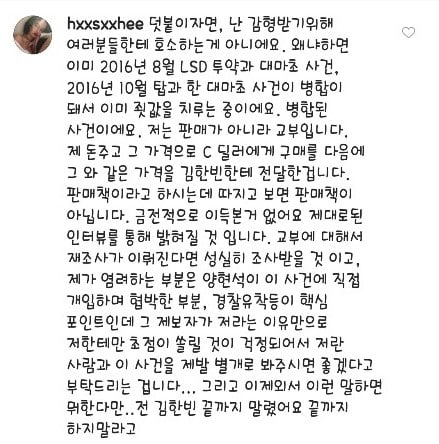