Exclusive: GOT7 Opens Up About Insecurities, Then Tears Up The Stage At 1st Stop Of “Keep Spinning” World Tour In Newark

On June 27, GOT7 kicked off their “Keep Spinning” world tour in the United States with an unforgettable concert that managed to be both electrifying and personal at the same time.

After performing at the relatively smaller PlayStation Theater in 2016 and the Barclays Center in 2018, GOT7’s show at Newark’s Prudential Center this week marked their largest concert venue yet in the New York area—and yet, there were many moments when the concert felt strangely intimate.

Throughout the night, GOT7 achieved an intriguing balance between vulnerability and confidence. There were times when the group laid themselves bare before their fans as they opened up about their inner fears—and just moments later, those same insecurities would be proven unfounded as the group blew the crowd away with exciting, high-energy performances that displayed just how far they’ve come as artists. 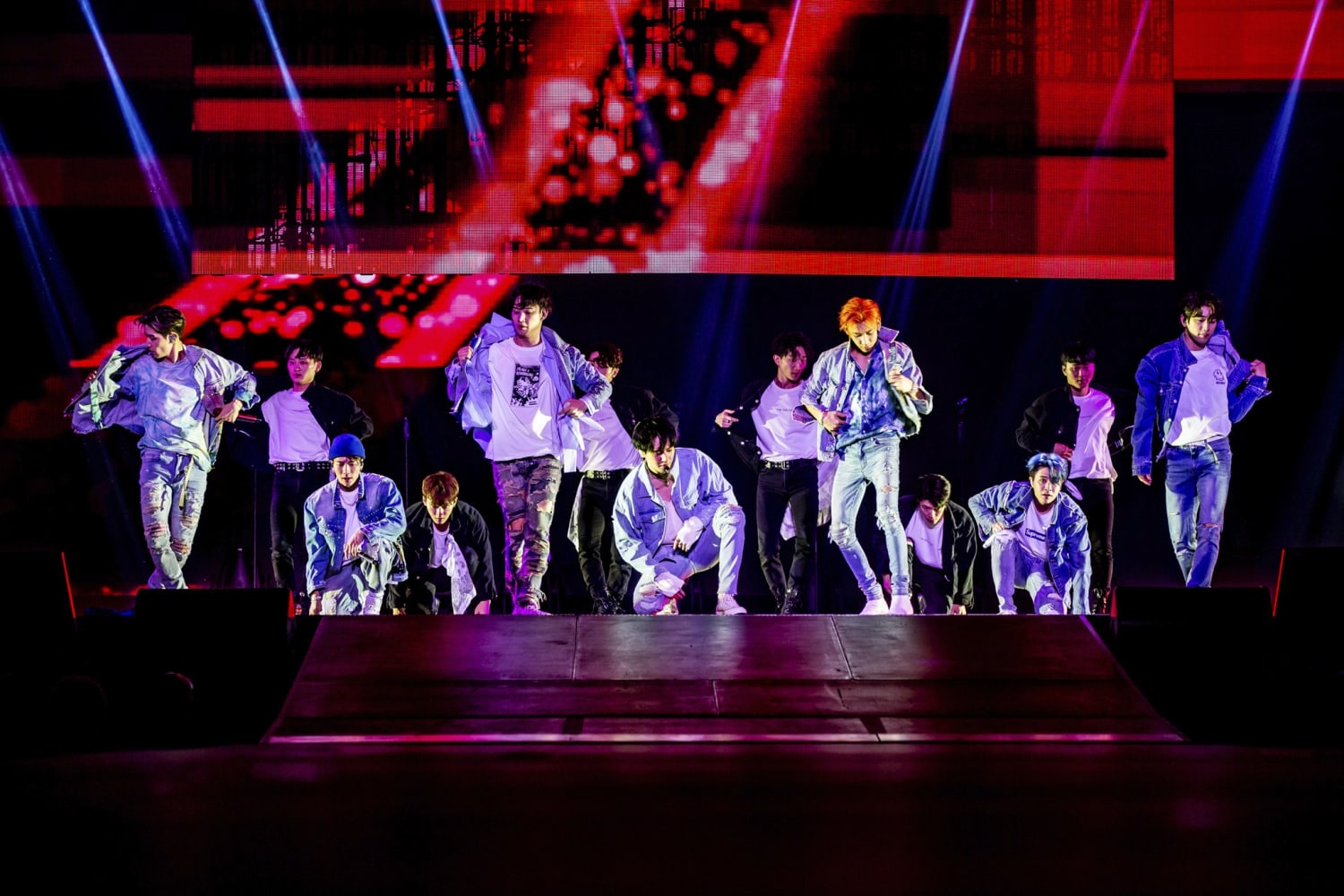 This delicate balance was entirely fitting, given that the name of their tour—a reference to their recent mini album “Spinning Top : Between Security & Insecurity“—is meant to suggest exactly that kind of precarious balance between strength and self-doubt. The concert kicked off with a video of the members looking agitated and an image of a spinning top that seemed to be wobbling out of control, but as the night wore on, later videos depicted that same spinning top achieving more stability and balance.

After starting the show with stirring performances of several of their more recent songs that deal with uncertainty and inner conflict, such as “Eclipse,” “1°,” and “I Am Me,” Mark revealed that the concert had been carefully planned so that its tone would shift over the course of the evening and ultimately tell a cohesive story. “We started off with really dark-concept songs,” he explained, “but as the day goes on, the songs are going to start getting brighter and brighter.”

Those brighter songs, which included “Come On,” “Just Right,” “Paradise,” and “Teenager,” allowed GOT7 to show off their signature playful side—especially “Just Right,” during which the group chose to forgo their choreography in favor of interacting with the crowd. Particularly towards the end of the concert, GOT7 spent an incredible amount of time getting up close and personal with their fans—whether by jumping into the crowd, joking around with them from on stage, or sweetly posing for selfies alongside lucky members of the audience. 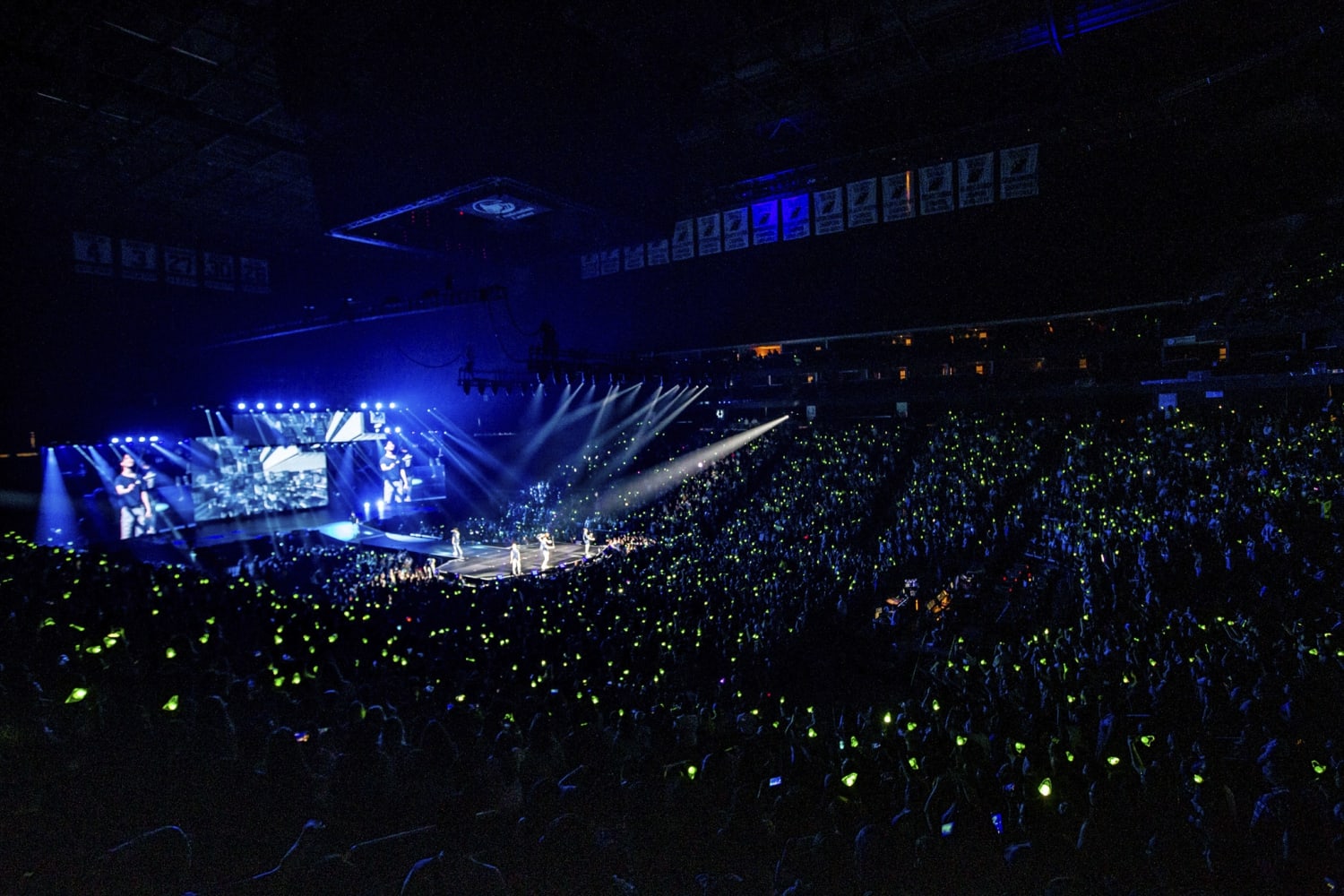 Some of the highlights of the evening were when GOT7 interacted with their fans and each other in these kinds of casual, unexpected ways. At one point, the members serenaded the crowd with an a cappella snippet of the English version of “Eclipse,” while at another, BamBam jokingly asked JB to choose between sub-units JJ Project and Jus2—only to have Jinyoung and Yugyeom walk off together before teasingly informing JB that they didn’t need him; they could form their own unit group.

When Mark mentioned Jinyoung’s recent drama “He is Psychometric,” in which he played a character who could read people’s minds by touching them, Jinyoung playfully pantomimed touching the audience as he joked, “I can feel you. I can read your mind.” When asked what he had learned, Jinyoung said cheekily, “They love us so much.” Then, in response to a teasing fan, he asked with a smile, “[Are you saying] this is a lie? It’s not!”

The members of GOT7 also showed off their individual talents through a series of special solo and unit performances. JB and Youngjae each performed new self-produced solo tracks (“Ride” and “Gravity” respectively), while BamBam, Mark, and Jackson performed two songs (“God Has Returned” and “Mañana”) produced by BamBam. Finally, Jinyoung and Yugyeom teamed up for a powerful dance performance that featured the two idols dancing both separately and together.

Another highlight of the show was a special remix of “Stop Stop It” produced by BamBam, which put a fresh twist on the beloved 2014 title track and featured more than one crowd-pleasing dance break. 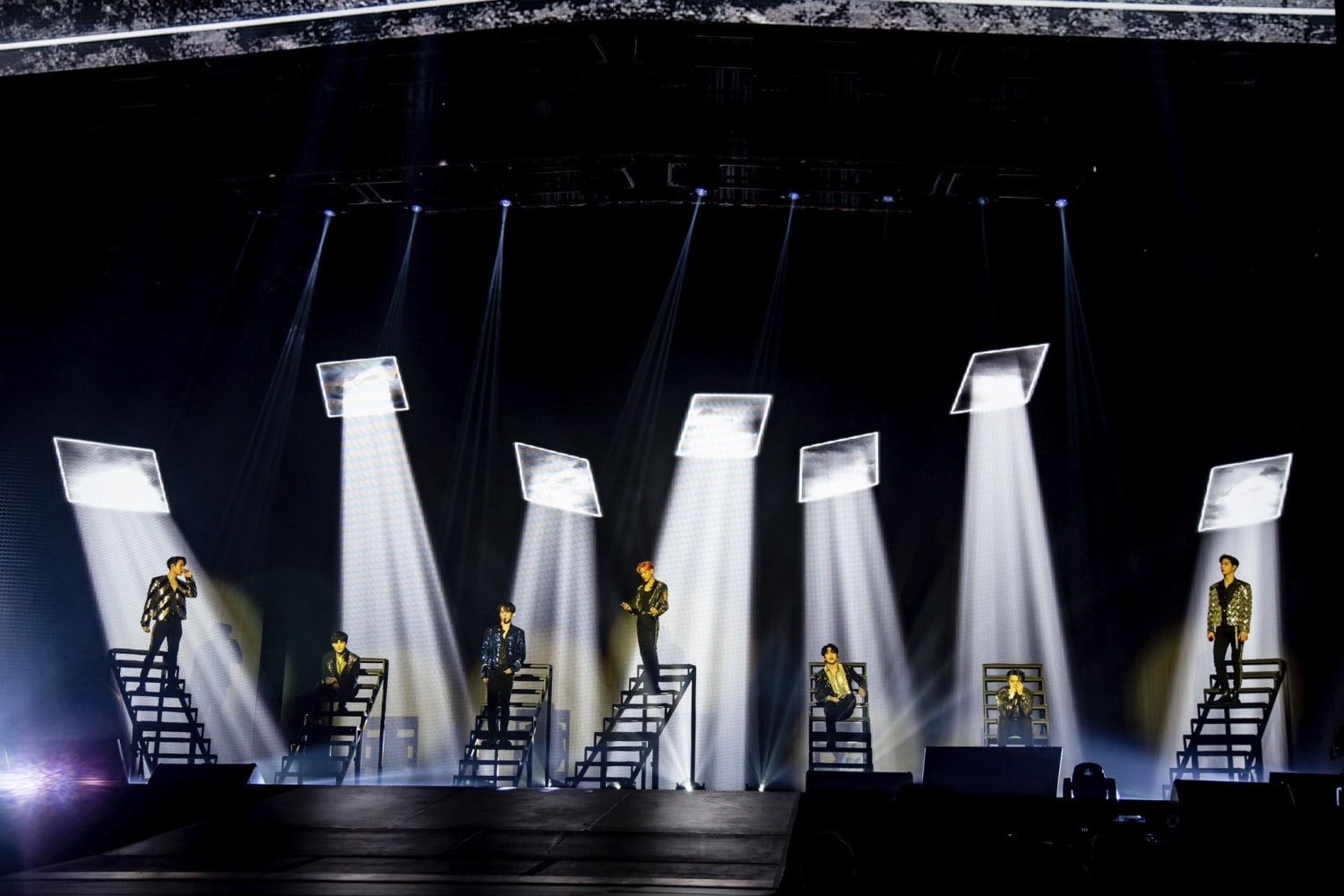 But in spite of the absolute self-assuredness they displayed on stage during these exhilarating performances, GOT7 revealed that they had faced a surprising amount of self-doubt as they prepared for their third world tour.

While expressing his gratitude to their fans, JB remarked, “This is an unforgettable moment… thank you guys for filling this arena.”

He then confessed, “I was kind of nervous or insecure, like the spinning top [from the concert video and GOT7’s recent mini album], before this tour. To tell the truth, I had a nightmare before this world tour. In the dream, I was standing on the stage, and I realized that all the seats were empty.”

“But now, I’m here with many of you supporting us,” he continued. “This is just like a miracle. I want you to enjoy the show, and I won’t let you down. Thank you for supporting us.”

Jackson also shared, “Actually, our last album ‘Spinning Top’—the concept is ‘Between Security & Insecurity.’ And for the past few years, we’ve been rising slowly and slowly, and we’re being recognized by everybody from [all over] the world, and for this tour, the venues are getting bigger and bigger. Everything is going well. And at the same time, when we’re all alone, we feel insecure.”

“And so from time to time, since everything is going well, going smooth,” he went on, “we think about: ‘Are all the fans going to be with us five years later, 10 years later, 15 years later?’ I guess that’s our insecurity. ‘And are we really that worth it? Worth all the fans coming to our show?’ We think about stuff like that… I hope the next time we’re back, I hope everybody is going to show up.”

Mark chimed in, “The truth is, we’re actually really worried about this tour. Because last tour, there was such great feedback from all the fans and everybody, so there was a lot of pressure preparing this tour. So I think we went through—I think it was like a month, a whole entire month—we were deciding what songs we should be doing, stuff like that. We put a lot of time and a lot of effort, a lot of thought into this tour, so we hope you guys enjoy it today.”

“Actually,” he continued, “since the comeback, since we released ‘Spinning Top : Between Security & Insecurity’—I think that starting from that album, we were all just really worried and insecure about how everybody would receive the album, if you guys were going to come to the concert or not.”

However, Mark concluded, “Everybody has their worries, everybody has negative things in their lives, but today, after coming on stage, we realized that we didn’t have to worry about this tour, because we have you guys. Everybody kept worrying about stuff, but at the end of the day, you just have to keep your head up and fight through it. Because we know that the fans are going to be there for us, and we hope that you guys know that we’re here for you guys.” 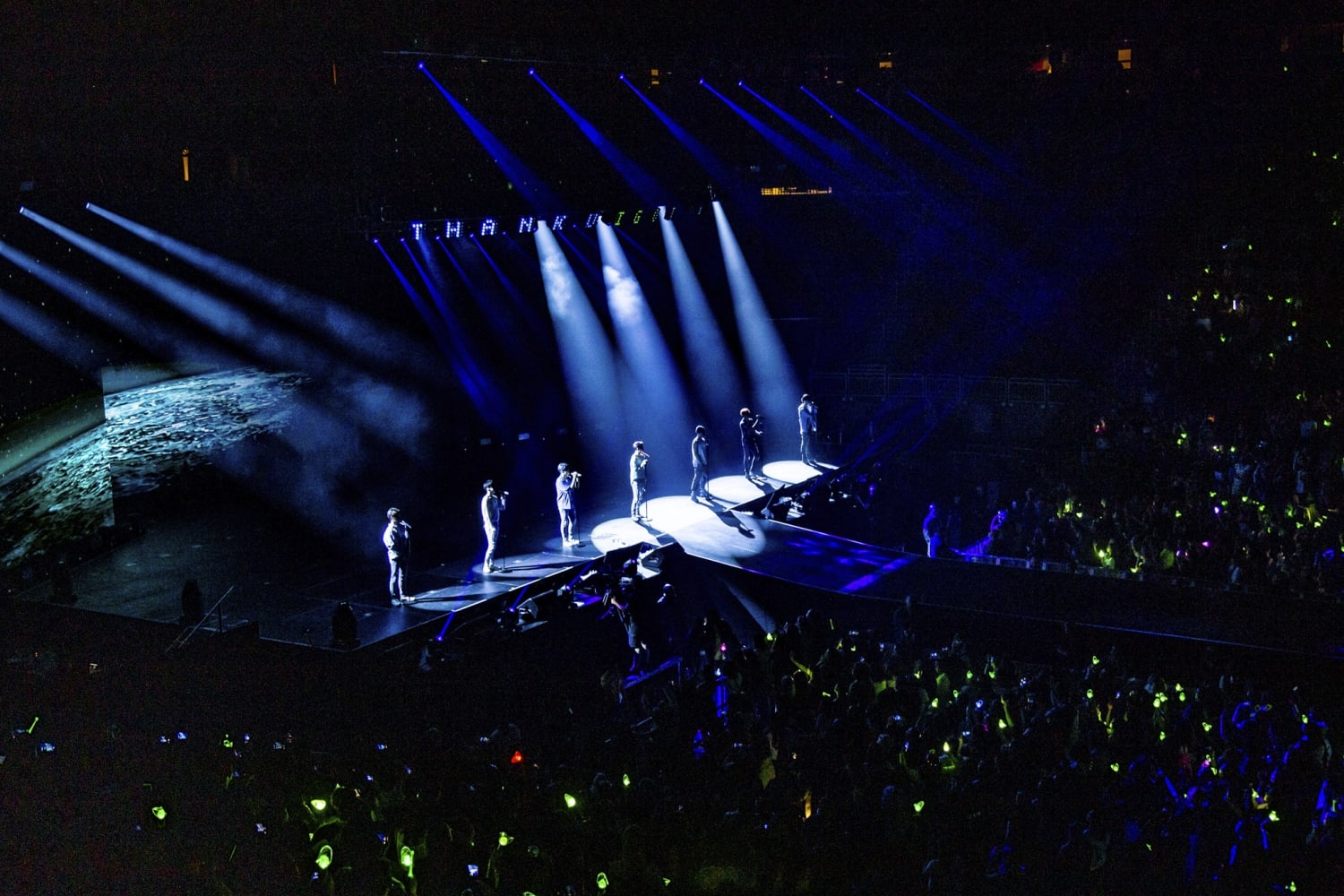 Mentioning the recurring spinning top imagery from the various videos that played during the concert, Mark pointed out, “So at the beginning of the [concert], if you guys saw the video, the top was spinning like crazy, right? It means we were really unstable, we were really worried about everything. But as the show went on, because of our fans, the top became more stable. It means that because we have you guys, we don’t fear anything, and that’s all we need. So it’s coming to an end because we found our happiness, which is our fans!”

BamBam went on to reveal, “We had a lot of hard times preparing [for this tour]. We couldn’t sleep at all and everything. But then we come back to New York, and we can feel the energy that you guys are giving us. Thank you so much. You know, the best part of the show today, the most amazing part is not us, it’s all the fans. It’s you guys. Thank you so much.”

He playfully added, “It’s our third time in New York. We started from Playstation [Theater], then we go to Barclays Center, and now we’re here, you know? Every year, we’re getting bigger and bigger and bigger, so I cannot wait for next year.”

Youngjae humbly told the crowd, “Thank you, everyone, for coming today. I never would have dreamed that this many people would come to see us. Thank you, iGOT7 [GOT7’s official fandom name]. You guys made today’s concert. We’ll keep working hard [as] GOT7, so please look forward to it. I believe in us and our Ahgase [GOT7’s fandom nickname]. Thank you.”

Yugyeom similarly thanked the audience and added, “We had a lot of worries while preparing for this tour. So I’m happy that you had fun with us today. We’re GOT7 because of you, and we will always be with you. I love you.”

“It was nice to see you again, but it’s a shame we only have just one day to meet… I hope we can meet many more times at more shows in the future,” he continued. “Compared to last year, we have grown, and it’s all because of our fans. I think we were all rather worried about today, but after performing, I hope those worries are gone. Thank you very much for coming today.”

Jinyoung then teased, “We’ll be back soon with a new album,” which Jackson confirmed by giving the crowd an enthusiastic thumbs-up. “We’re always working on our albums, so we’ll be back soon!” 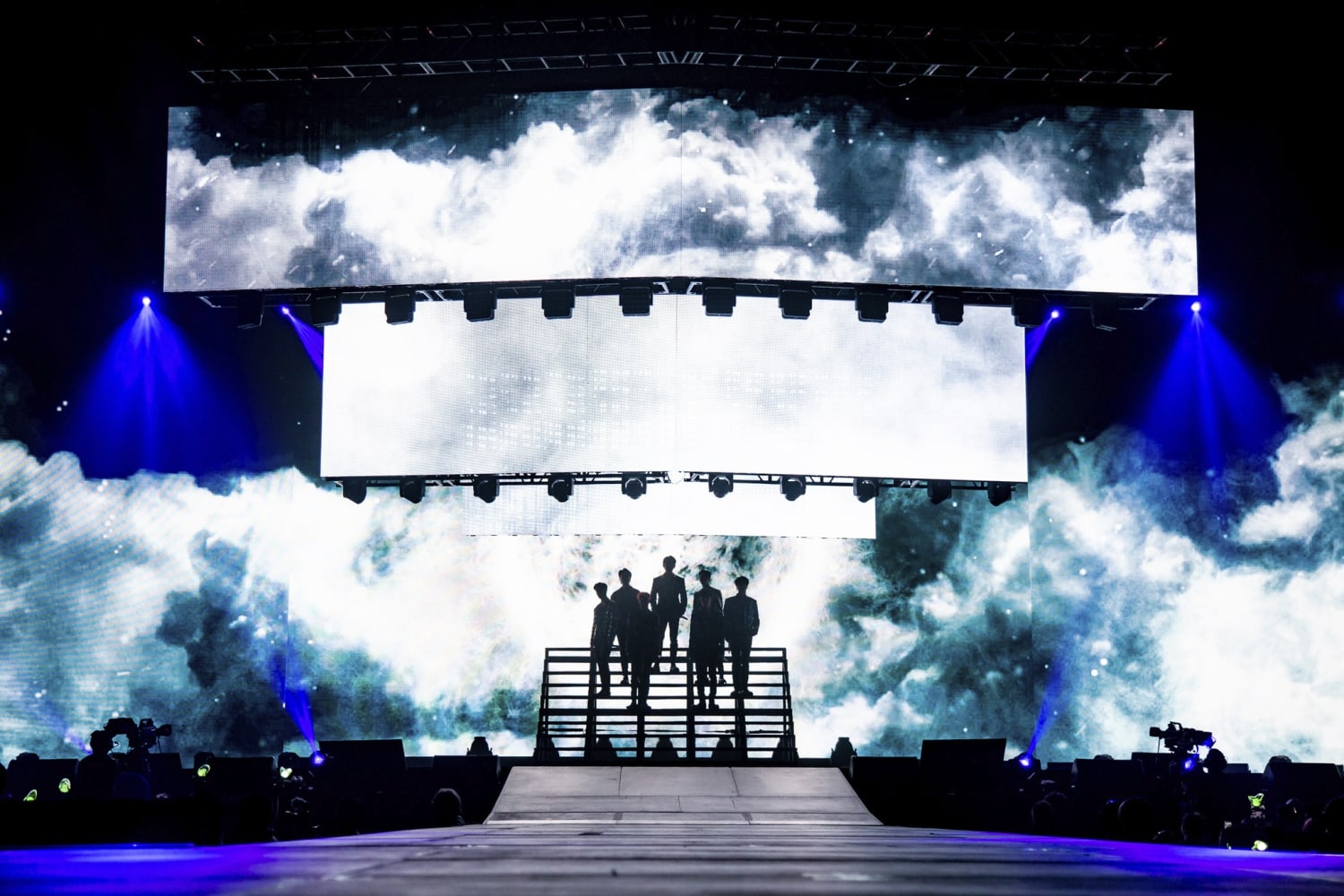 Jackson also brought up GOT7’s recent appearance on the “Today” show, which marked the very first time that a K-pop group had appeared on the famous U.S. morning show. He then thanked the fans for making it possible, saying, “We wouldn’t have been there with you guys. I also want to say that we’re going to work harder and harder to make you all proud.”

Throwing the final wisp of lingering insecurity to the wind, Jackson added, “And we respect everybody, but we, GOT7, we fear none.”

Before jumping into the final songs of their encore, Mark declared, “We want to thank everybody for coming out tonight. We love you guys, and GOT7 is going to be here forever!”

With one thrilling concert of their tour under their belt, GOT7 seemed ready to take on the rest of the world—and hopefully, one step closer to that security they spoke of all night.

Special thanks to LiveNation for the photos and for inviting us out to the show!