Chu Ja Hyun and Yu Xiao Guang returned to SBS’s “Same Bed Different Dreams 2 – You Are My Destiny” to show their wedding and son.

On the July 1 episode, the couple was emotional as they finally walked down the aisle. Yu Xiao Guang and Chu Ja Hyun have been legally married since January 2017 and held a wedding on May 29, 2019 at the Grand Hyatt Hotel.

Chu Ja Hyun surprised her husband by reading a letter she had written for him. She said, “Do you remember the first time I met you? I was so lonely while working overseas without friends and family, and I was so happy that you appeared.”

On bended knee, Chu Ja Hyun asked, “Will you marry me in our next lifetime too?” Yu Xiao Guang burst into tears, ran to his wife, and accepted her ring. He also gave her a ring and accepted the proposal. “I had no idea,” commented Yu Xiao Guang. “It was a wedding for my wife, but she actually held it for me. I couldn’t hold back [my tears] at the end. I didn’t know what to do. Let’s get married when we’re born again.” 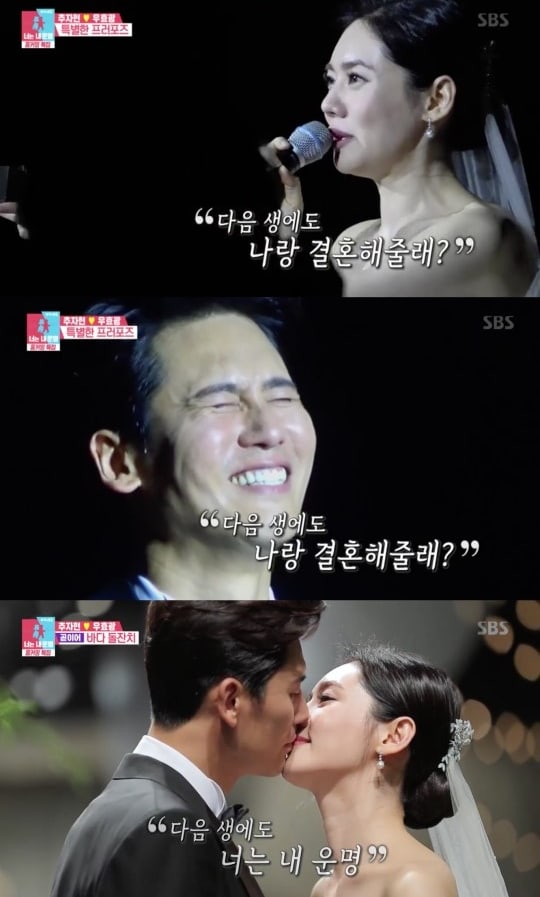 The cast and MCs at the studio also cried while watching the footage. So Yi Hyun tearfully said, “What’s wrong with me,” and Seo Jang Hoon also wiped away tears. Poking fun at the MC, Kim Gura commented, “Seo Jang Hoon, you need to get married. Let’s hold a wedding for you as well.” Seo Jang Hoon replied, “Wow this is so sad. Why are they holding such a sad wedding?”

Chu Ja Hyun explained, “We didn’t intentionally do it like that because we were filming ‘Same Bed Different Dreams 2 – You Are My Destiny.’ I prepared all of it because I wanted to do those things. A wedding is usually led by the husband, but I’ve only been on the receiving end for the past eight to nine years. He’s someone I’m really grateful for, so I really wanted to express that at the wedding.”

Explaining her tears, Chu Ja Hyun said, “I said what I always say to Yu Xiao Guang, proposed, and asked him to marry me in my next life as well. I was really lonely while growing up, and I suffered a lot while acting in China. There were many heartbreaking and painful things. While preparing for the wedding, all those memories flashed across my mind.”

She added, “The people that came as guests were all people who had helped me in my life. I kept tearing up at the thought that I was in front of those people.” Chu Ja Hyun revealed that she would be donating the congratulatory money from the guests.

The second part of the wedding was the first birthday party for Chu Ja Hyun and Yu Xiao Guang’s son Ba Da. Before the party began, a video played onscreen that chronicled the couple’s moments with their firstborn, including never-before-seen moments of his birth. “This is something we filmed to keep for ourselves,” said the actress. The video also included a clip of Yu Xiao Guang’s hands shaking before cutting the umbilical cord.

Yu Xiao Guang then appeared on stage. “June 1, 2018 is a day I’ll never forget in my life. It was the day I met my son Ba Da for the first time. A few hours after giving birth to Ba Da, my wife went to the ICU with convulsions. If I hadn’t been by her side at the time, there would not have been a wedding today. It felt like the sky was falling watching Chu Ja Hyun not being able to breathe and the doctor busily [treating her]. At the time, I also had to go to the postpartum care center to look after the baby and reassure our parents, so I had to keep it a secret. I’m so sorry Mom.” 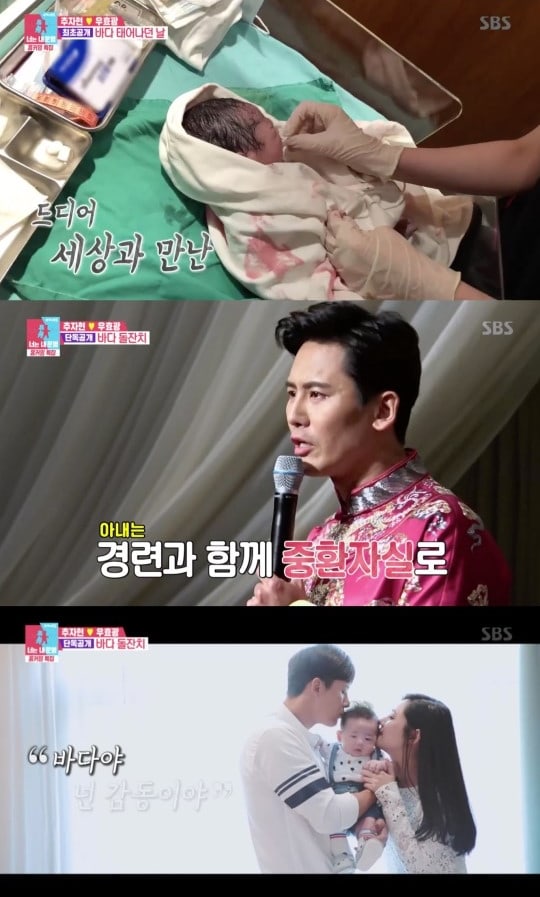 Chu Ja Hyun explained, “My mom didn’t even know. We couldn’t tell her in case she’d worry.” Yu Xiao Guang continued, “Every day was a nightmare as I waited for Ja Hyun to regain consciousness. From here on out, I’ll devote everything for Ja Hyun’s health.” Ba Da, Chu Ja Hyun, and Yu Xiao Guang then appeared in front of the guests. Pushing a flower-covered stroller, Ba Da put smiles on the guests’ faces, and he smiled back.

During doljabi, an event where a baby picks an item meant to predict the baby’s future, Ba Da chose a red book, to the delight of his mother. Kim Sook joked, “Did Chu Ja Hyun push the book forward?” and Seo Jang Hoon added, “Did you prepare a red book on purpose so that he would pick it?”

Chu Ja Hyun confessed, “You guys are really observant. Ba Da likes the color red so I intentionally prepared a red book.” The baby then made his mom even happier by choosing a stethoscope and money. Byun Ki Soo, who was the MC at the event, said, “It looks like you’re going to study hard, become a doctor, and earn lots of money.”

“I earned so much through the program ‘Same Bed Different Dreams 2 – You Are My Destiny,'” concluded Chu Ja Hyun. “I earned Ba Da as well as lots of support and love. I came on the show to say thank you and that we’ll live well. Please continue to support us in the future.” 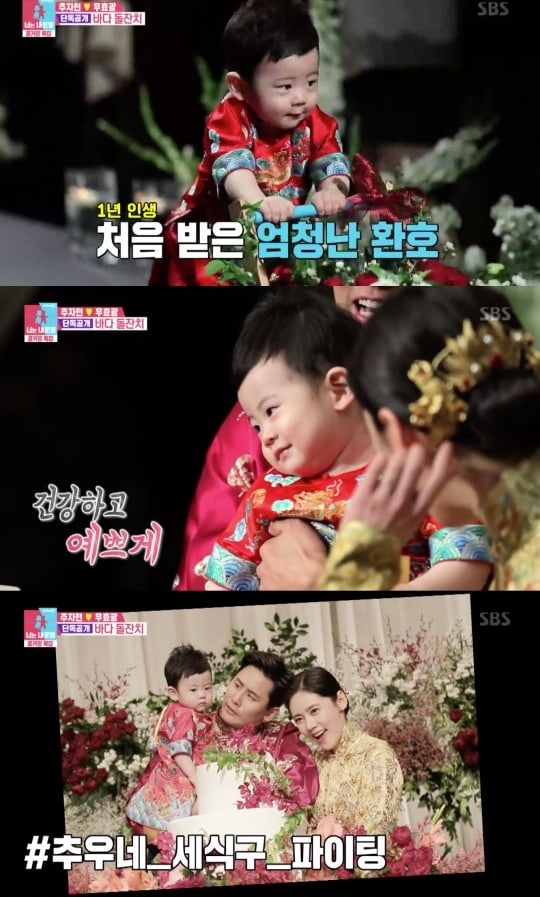 Chu Ja Hyun
Same Bed Different Dreams 2 – You Are My Destiny
Yu Xiao Guang
How does this article make you feel?