“TWICE Will Always Be 9”: Mina’s Absence Was Felt At “TWICELIGHTS” Tour In Singapore

TWICE will always be nine. We’ll return better and stronger. Please wait for us.

Nayeon was of course referring to fellow TWICE member Mina’s absence tonight during the fourth stop of TWICE’s “TWICELIGHTS” tour in Singapore. Mina’s absence was felt throughout the night, as vocal parts, choreography, and even on screen graphics had to be noticeably adjusted. Despite her absence, the remaining eight members of TWICE stepped up to electrify the capacity crowd of 10,000 ONCE tonight at the Singapore Indoor Stadium. 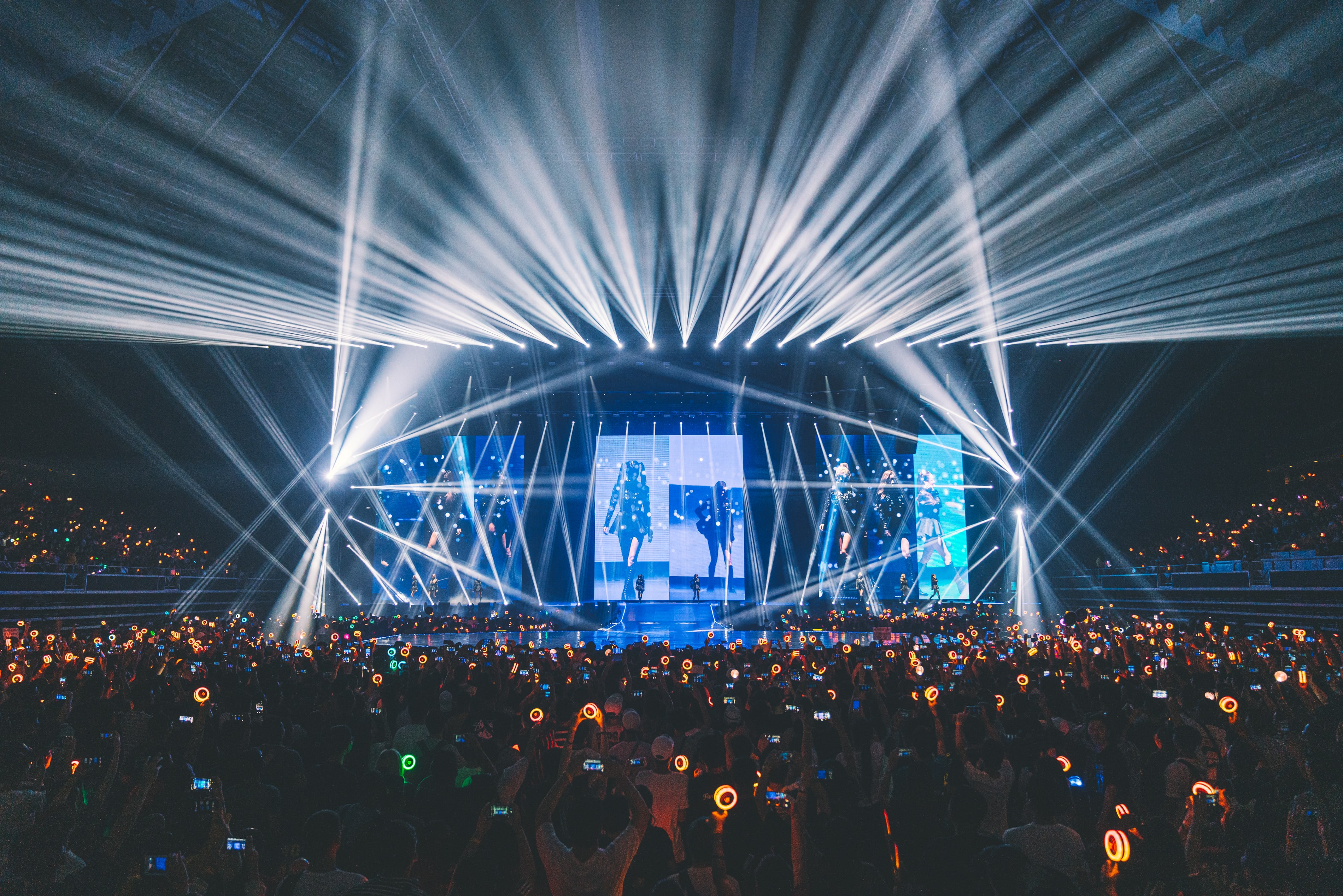 While the theme of last year’s “TWICELAND ZONE 2: Fantasy Park” concert was a fantasy amusement park, this year’s “TWICELIGHTS” aimed for a simpler concept around colors, which worked amazingly well. The entire concert was organized around seven colors, with each color offering a different concept and visual experience for ONCE.

The night started with a black and white opening video montage of the nine members of TWICE, quickly followed by an opening medley of “Stuck In My Head,” “Cheer Up,” and “Touchdown.” The eight ladies of TWICE, along with six backup dancers, entertained the crowd with distinctly girl crush looks and costumes. Even the cutesy song “Cheer Up” was remixed into a style befitting their black concept color. 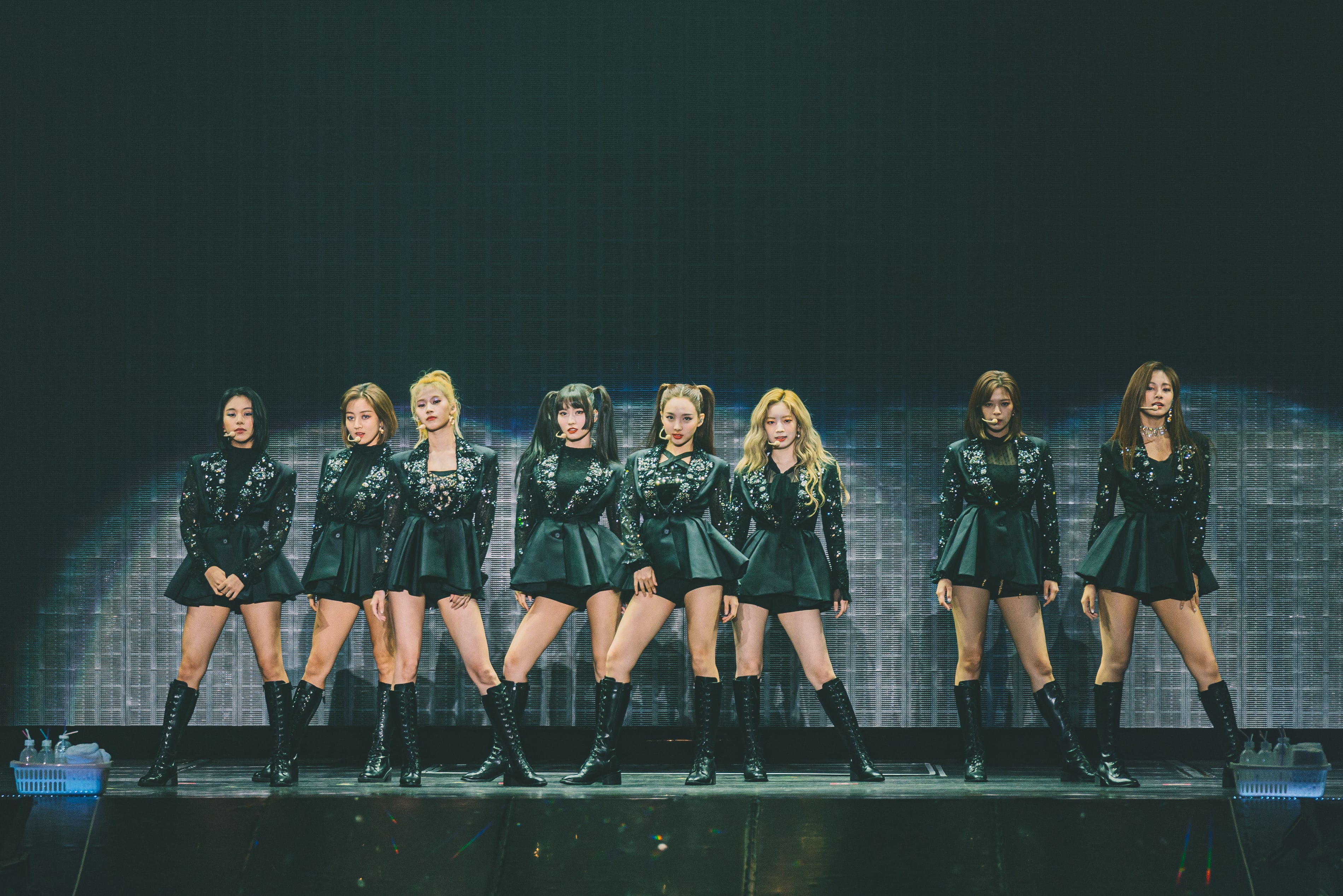 After a quick talk segment where the members introduced themselves, the concept stage continued with the Korean version of “BDZ” and 2018 hit “Yes or Yes.” The girls then exited the stage while the concert transitioned into…

A short and energetic dance break from TWICE’s backup dancers in front of a gold video wall telegraphed the next color concept. The TWICE members performed a quick costume change, removing their jackets and revealing gold trims across their outfits. They performed two songs: “I Want You Back” (performed with golden scepters as props) and a special remix of their summer hit “Dance The Night Away.”

This segment started with another video montage, but this time, the members were dressed in all white and sitting on clouds. And as expected, the eight goddesses reappeared in elegant white floor-length dresses. The concept of this segment was ballads and included sentimental B-sides such as “After Moon,” “You In My Heart,” and “Sunset.” To my surprise, “Heart Shaker” was also part of this segment. My confusion deepened as the girls performed only one verse of the track before suddenly disappearing from the stage. What was going to happen next?

[SINGAPORE]
Dressed gorgeously in a white dress, the ladies are performing to After Moon ? #TWICE #TWICEinSG #TWICELIGHTSinSG #트와이스 pic.twitter.com/r6SAUOaHiQ

Another video montage followed, this time with everyone in red against an all red backdrop. From the video and the sensual red costumes that the TWICE members reappeared in, it was clear that we were now transitioning into seeing the sexy side of TWICE. At least the girls did not leave the fans hanging—they performed and finished the second half of “Heart Shaker.” The song was rearranged to fit their now sultry concept, and the choreography was also changed to fit the new style. 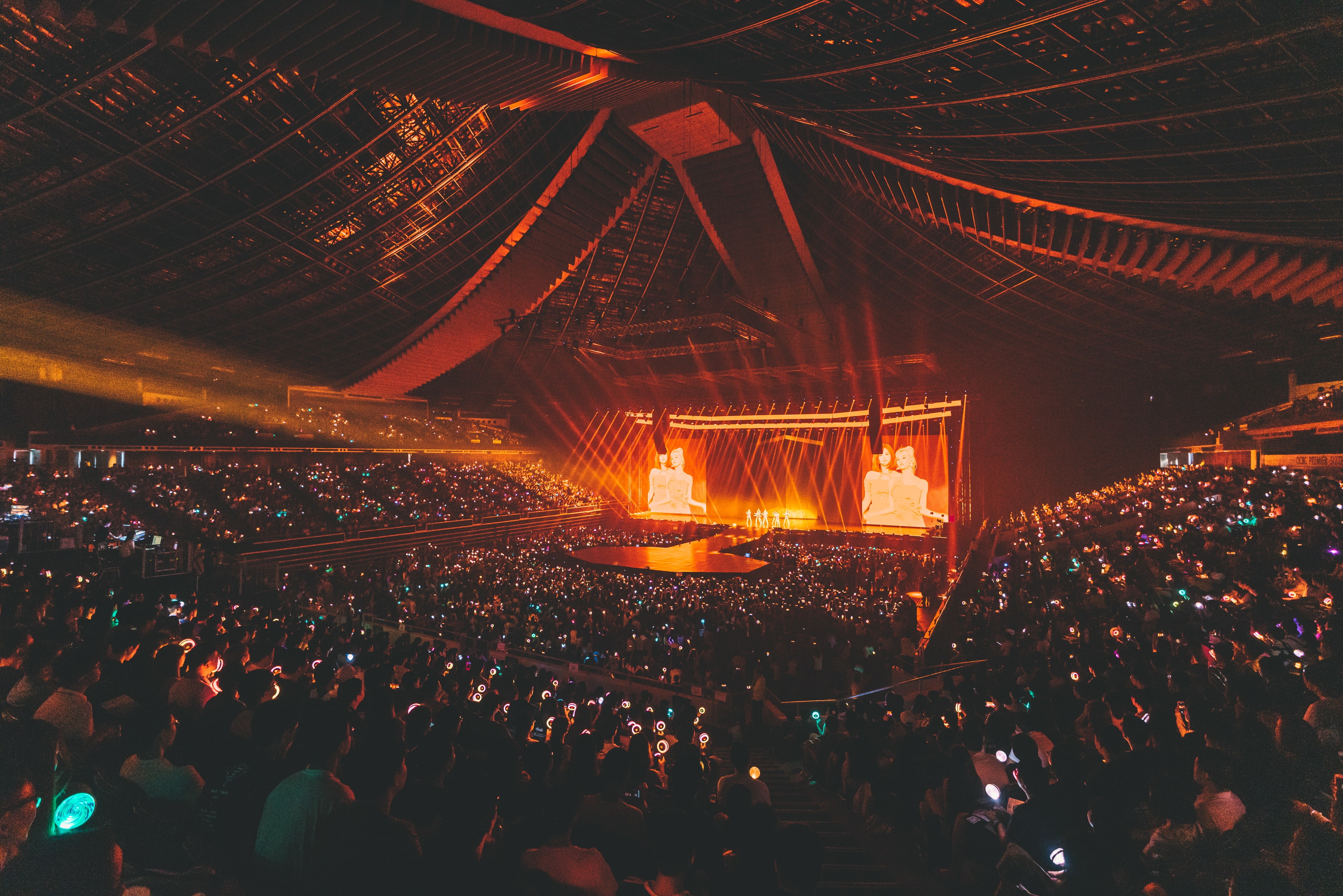 Popular B-sides “Strawberry” and “Woohoo” followed, and the show shifted into unit stages.

The first unit stage was a cover of Beyoncé’s “Dance for You”, performed by unit captain Tzuyu with members Dahyun and Sana. The sexy choreography showed Singapore ONCE a side of TWICE that they hadn’t seen before and was befitting of their red color ensembles.

The next unit stage was performed by Jihyo and Momo in all blue costumes, and it was a cover of SHINee member Taemin’s “Goodbye”. As two of the top dancers in TWICE, Jihyo and Momo danced an emotional lyrical jazz choreography while providing a spirited vocal performance.

The final unit stage was captained by Chaeyoung, and she was joined by members Nayeon and Jeongyeon in covering Lady Gaga’s “Born This Way” (Mina would have been in this unit stage). The three members gave a strong and powerful performance in silver body suits, fedoras, and thigh-high boots, which was amazingly on-brand with the artist that they were covering. 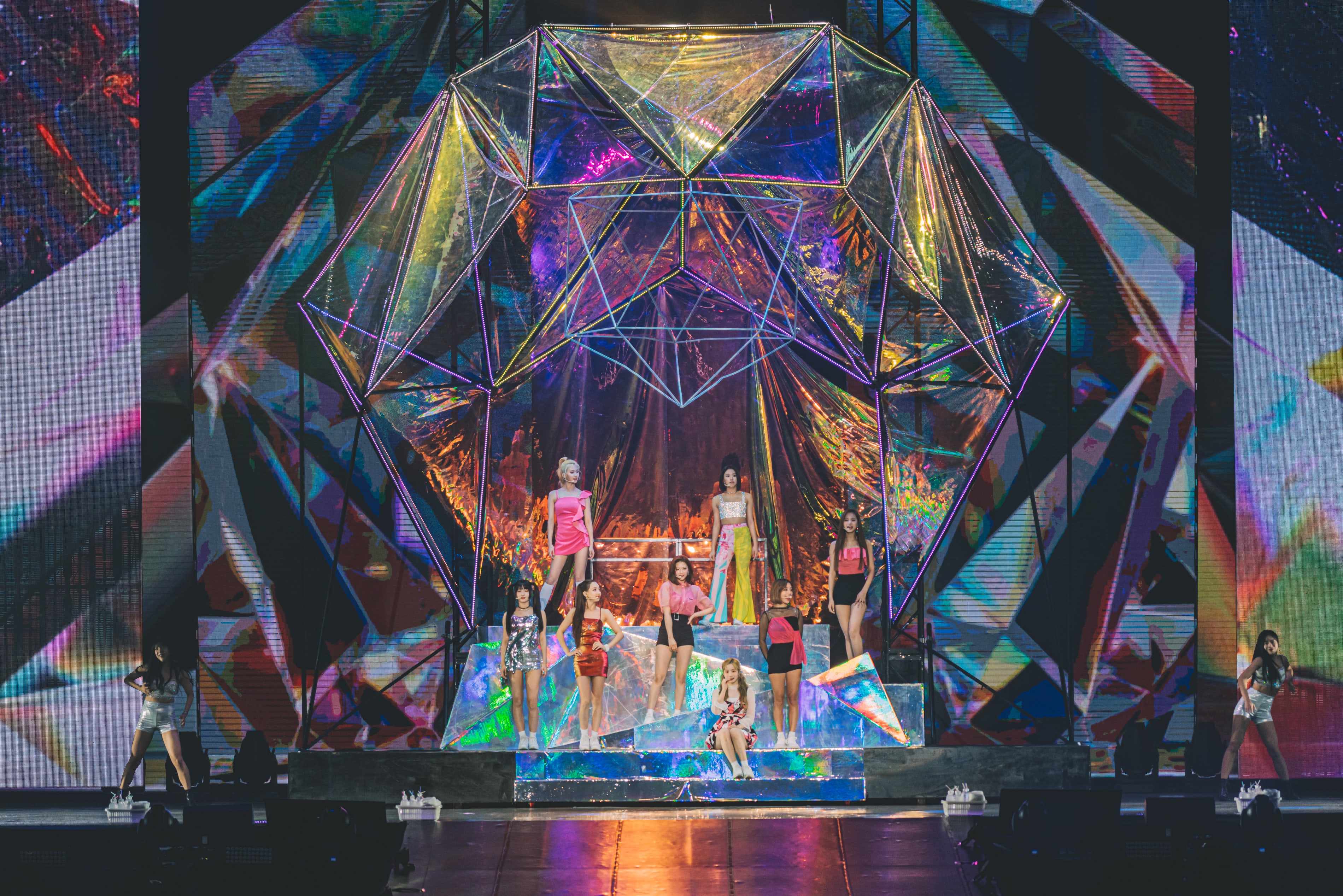 The final color concept of the night was pink, which represented the concept that TWICE is best known for—cute. As expected, the stage started with a video, which turned out to be a never before seen music video for their B-side “Turn It Up.” 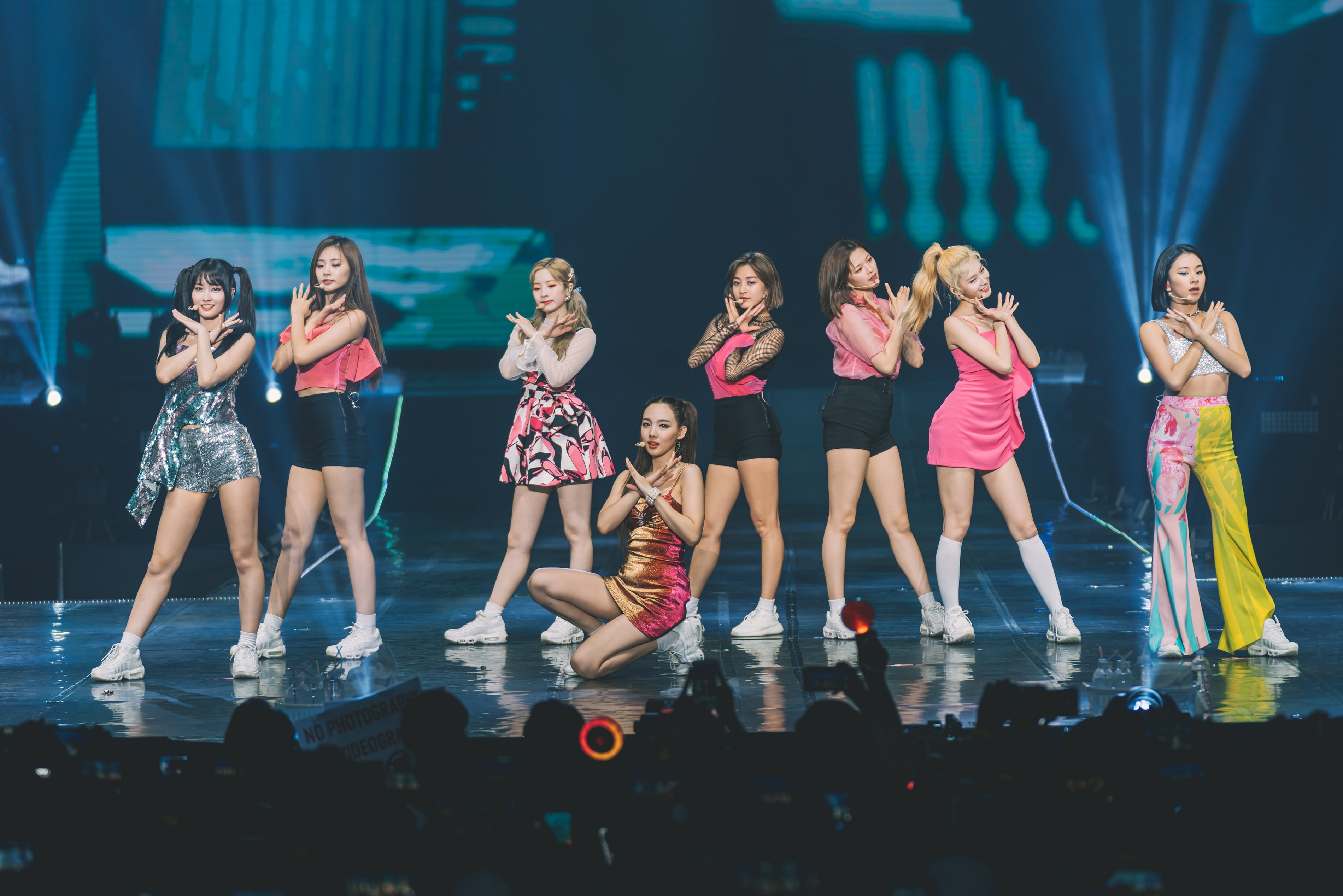 This last segment of the concert delighted fans with a steady stream of TWICE hits performed in their original styles that fans are most used to. First was “Likey,” which was followed by “What is Love?” “Like OOH-AHH,” “TT,” and a special version of “Fancy” with a powerful dance break remixed into it.

After a short intermission, the encore began with TWICE performing their 2017 hit “Signal.”

Similar to last year’s “TWICELAND ZONE 2: Fantasy Park” concert, a specially prepared fan video from Singapore ONCE started playing for the TWICE members after the first encore song. This year’s fan video was especially moving, as it talked about TWICE being the “light” for ONCE, and it also included an interview clip from 2018 with Mina stating the following into the camera:

It wasn’t an easy decision, but being a singer was my dream, so I have to try really hard while I can.

This really highlighted the fact that the TWICE that was here in Singapore tonight was incomplete, despite the concert being a great success, and it brought most of the members to tears while watching the fan video on stage. As the members took turns to give their emotional closing words, all of them reassured ONCE that TWICE will always be nine and that they will overcome all challenges to return as nine again.

Their ending messages really emphasized the word "nine". They kept promising to come back as the TWICE we know ?❤️ @JYPETWICE, we ONCEs love all nine of you, our NaJeongMoSaJiMiDaChaeTzu, and we will wait for you all to come back.#TWICELIGHTSinSG #NineOrNone #GetWellSoonMina pic.twitter.com/bhBbprp0Ix

Finally, the night concluded with TWICE sending off the audience with a spirited performance of “Knock Knock” and “Stuck.”