Among followers of K-pop, there is sometimes an unfortunate tendency to pigeonhole TWICE as a cutesy girl group—a classification that has, at times, even worried the members themselves.

But while there is no question that the group is an undisputed master of the cute concept, TWICE proved beyond a doubt at their first New York area concert last night that their impressive talent and limitless potential make them so much more.

On July 21, TWICE lit up Newark’s Prudential Center in a sea of rainbow lights during the second stop of their very first U.S. tour, appropriately entitled “TWICELIGHTS.” The group’s new light stick, called the “Candybong Z,” allows fans to choose between a spinning wheel of TWICE’s official colors (apricot and neon magenta) or a different color of their choice, with each color representing one of the nine members.

The result—a breathtaking rainbow of multicolored lights—was perfectly in keeping with TWICE’s theme for the concert: a dazzling display of TWICE’s many talents and multifaceted charms.

From the moment that TWICE first stormed onto the stage with powerful rock remixes of their recent B-side “Stuck in My Head” and their 2016 smash hit “Cheer Up,” it was clear that the girl group was ready to show off new sides of themselves by putting an exciting twist on some of their most iconic songs—and the crowd was all for it.

One performance that particularly highlighted TWICE’s impressive ability to switch between concepts was “Heart Shaker.” For the final song of their soft, ballad-focused “white” segment, the girl group started singing a delicate, piano-backed remix of the cheerful 2017 hit. Then, all of a sudden, the lights went out, and a seductive video of the nine members bathed in red light transformed the atmosphere of the concert in the blink of an eye.

Kicking off the sultry “red” segment of the show, TWICE returned to the stage in fiery red outfits to perform the rest of the song with a second, completely different twist: a sexy remix of “Heart Shaker” that featured entirely new choreography.

Another track that received a makeover with brand-new choreography was the playful 2016 B-side “Woohoo,” which the group performed while dancing sensually with red scarves. Unexpectedly, the song worked well with a sexier vibe, revealing that even with their older discography, TWICE still has plenty of surprises hidden up their sleeves for their fans.

The TWICE members also wowed the crowd with a series of stunning unit performances that showcased their ability to take on any genre. Sana, Tzuyu, and Dahyun set the stage on fire with a seductive cover of Beyoncé’s “Dance for You,” while Jihyo and Momo drew gasps of awe with their powerful, passionate rendition of Taemin’s “Goodbye.”

Jihyo and Momo performing “Goodbye” by Taemin at #TWICELIGHTSinNEWARK pic.twitter.com/e4q0r8toNw

Finally, Nayeon, Chaeyoung, and Jeongyeon‘s cover of Lady Gaga’s “Born This Way,” which managed to be both fierce and effervescent at the same time, had the entire Prudential Center exploding in cheers and singing along.

All of TWICE’s many colors came together in the final segment of the concert, which featured TWICE entering regally on a giant holographic prism-shaped float as they delighted the crowd with their bubbly hits “Likey” and “What is Love?” while sporting colorful outfits. Dahyun later explained, “We opened our performance by entering while riding a prism. In keeping with our ‘TWICELIGHTS’ theme, we showed you a variety of colors.”

But even as TWICE electrified the crowd with their irresistible mix of playful charm and jaw-dropping talent, there was an inescapable tinge of sadness to the night. Although Mina, who is sitting out the “TWICELIGHTS” tour for health reasons, was physically absent from the concert, her presence was unmistakable throughout the evening. Fans cheered especially loudly whenever Mina appeared onscreen in a video, and many of them set their light sticks to Mina’s official color during the ballad segment of the concert, setting the venue aglow in a beautiful ocean of mint green.

The audience also showed their love and support for Mina by chanting her name in unison both before and after the song “After Moon.” The TWICE members were visibly moved by the display, with several of them tearing up while singing as they gazed out at the crowd. Jeongyeon later remarked, “Performing ‘After Moon’ for the first time here with ONCE, lit up so beautifully with Mina’s color, makes me feel so emotional.” She then teasingly pointed out that Jihyo had burst into tears early on in the song, laughing, “I teared up a bit, but Jihyo cried so much.”

Wiping her eyes, Jihyo replied, “I miss Mina so much.” She went on to explain, “Because you all set [your light sticks] to Mina’s color, and today, I saw even more Mina placards than usual, and when we came on stage, everyone was shouting, ‘Mina, Mina!’ I just miss her so much.”

jeongyeon said she was happy seeing the stadium filled with mina's color#TWICELIGHTSinNEWARK pic.twitter.com/EU8MAd6a04

The TWICE members also brought up Mina at the very end of the concert, when they were saying their goodbyes during the encore. While expressing her gratitude to their fans, Nayeon added, “And also, [I want to thank] our members, including Mina, who we miss so much.”

Chaeyoung chimed in, “Thank you for coming today, and thanks for supporting and waiting for us. Please remember us as nine members, and always be with us.”

Several members also mentioned that they hoped to return with another tour in the near future, including Momo, who remarked with a shy smile, “I hope we can come back to New York again next year.” The crowd responded with deafening roars of affirmation, seemingly signaling the start of a promising career in the United States. If nothing else, the show left the audience awestruck and wanting more—and eager to see what these nine talented women have in store for us next. 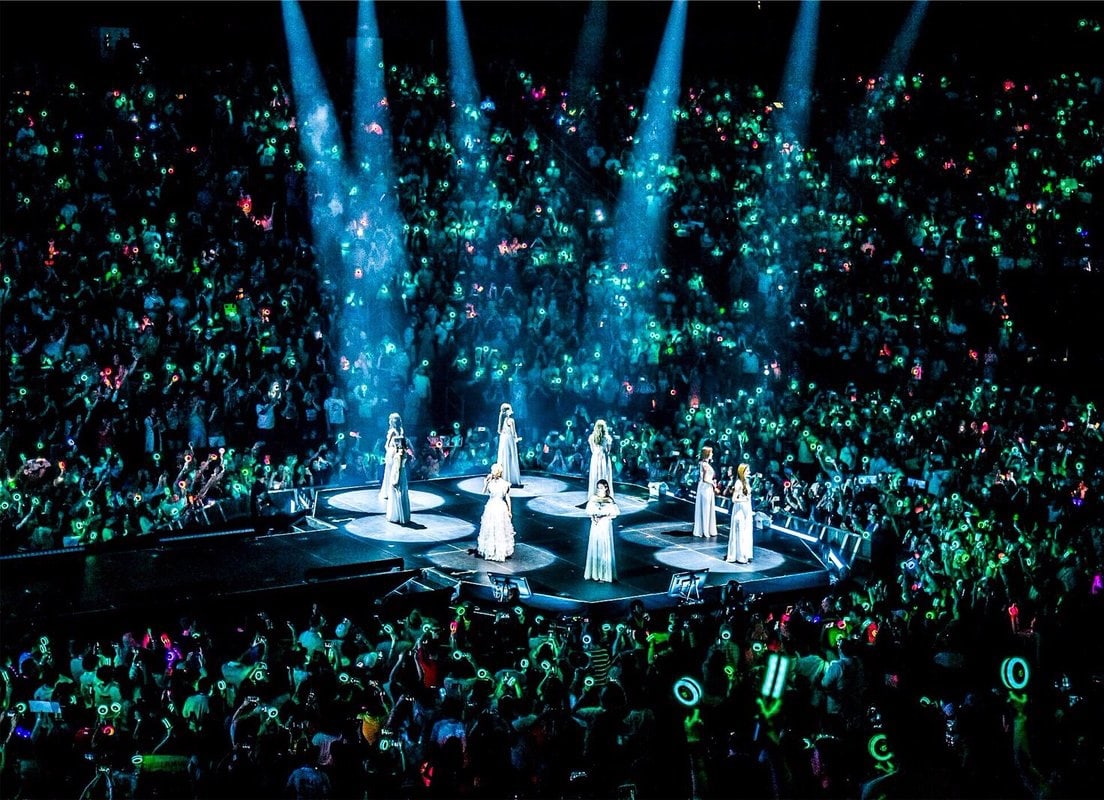 Special thanks to LiveNation for inviting us out to the show!