On September 1 local time, The Rose took New York by storm during a thrilling—and particularly memorable—concert at The Town Hall, the third stop of their “We Rose You Live” U.S. tour. Despite having made their official debut just two years ago, in August 2017, the band proved themselves to be talented performers and consummate professionals throughout a show in which they faced repeated technical difficulties.

The unexpected mishaps started during the very first song of the night, “I.L.Y.,” when the band started playing the instrumental introduction to thunderous cheers and applause—only to discover that Woosung’s mic wasn’t working. Shortly afterwards, Dojoon noticed a problem with his keyboard, while Woosung found that his in-ear monitors weren’t picking up his voice.

However, the group swiftly recovered from the continuing setbacks with poise, positivity, and an unshakable sense of humor. Dojoon, in particular, kept the mood lighthearted throughout the band’s repeated soundchecks, joking, “We’re trying to pretend that we’re perfectionists here.” Later, as they prepared to launch back into “I.L.Y.” for the second time that evening, he playfully asked the audience, “Pretend that we just came out [for the first time].” 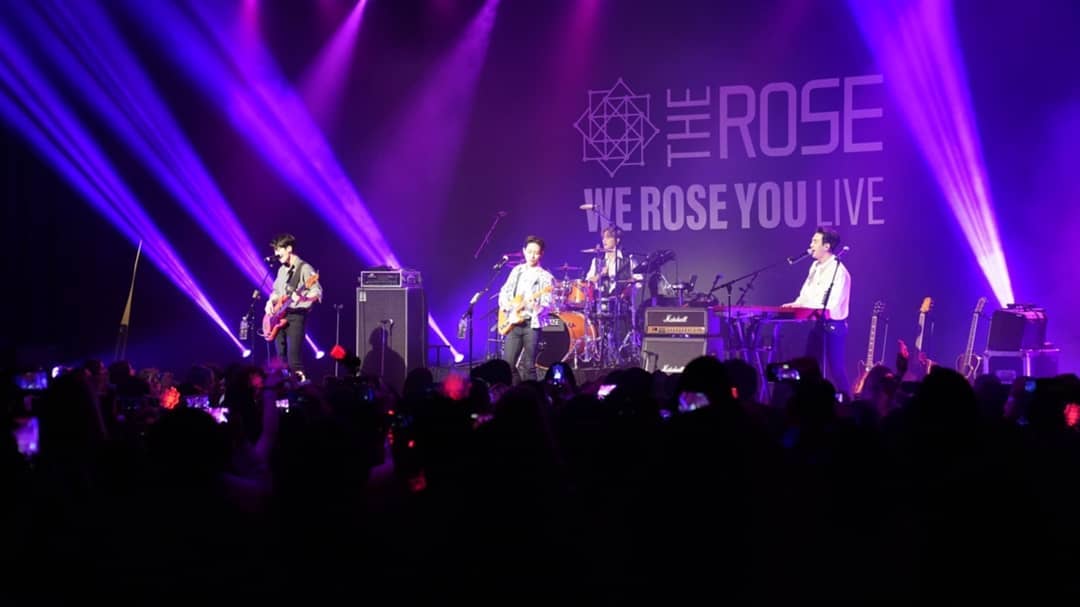 In the end, Woosung and Jaehyeong ultimately decided to forgo their in-ear monitors for the night—a brave decision that allowed the band to transform their technical setbacks into an unexpected advantage. After deciding to remove his in-ear monitors entirely, Woosung told the crowd, “I think that for this to be the best concert—which it’s going to be, obviously—you guys are going to have sing loudly with us. Because I might not be able to hear myself, so I might suck at singing.”

His fears were unfounded: throughout the night, The Rose blew the audience away with their impressive vocals and powerful performances. But the passionate singing of the crowd, who seemed to know almost all of The Rose’s lyrics—even those in Korean—added something special to the concert as it reverberated through the walls of the historic venue. After the entire theater sang along to “I Don’t Know You” and “Candy” in perfect unison, Woosung exclaimed, “This feels amazing, because I feel like I’m literally singing with you. I have nothing in my ears right now, and this literally feels like I’m singing with you guys. I love it.”

“I’ve never done a concert like this,” he continued, “but this really feels like we’re here to connect with you guys. It’s not about our rhythm or the tone of my voice or what key I’m on or if I’m off[-pitch]—it doesn’t matter, because we’re just singing together.”

Dojoon then cracked up the crowd by jokingly interjecting, “Maybe it was our destiny!” 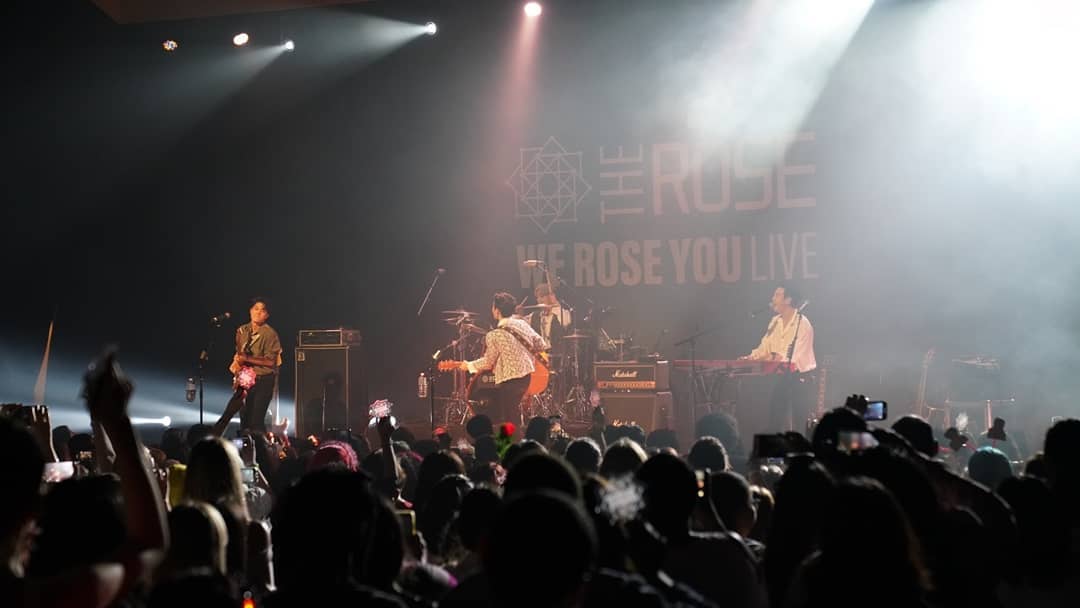 He may have been onto something. Curiously, the technical difficulties that continued through the show somehow managed to create a more intimate, personal atmosphere, with the members of The Rose casually bantering with their fans throughout the evening and sharing a glimpse of how they worked together behind the scenes.

Additionally, the curveballs allowed The Rose’s raw talent and spontaneity to shine through in unexpected ways. In one particularly fun moment, the band suddenly performed an impromptu rendition of Stevie Wonder’s “Isn’t She Lovely” while testing their instruments. During another soundcheck, when Dojoon was prompted to “say something” into his mic, he and Jaehyeong jokingly began singing A Great New World’s hit song “Say Something.”

The Rose also charmed the crowd with their energetic stage presence and the playful way they interacted with audience members all evening. At one point, when their fans began chanting, “We love you! We love you!” the band started chanting back with just as much fervor, “We love you! We love you!” The members also didn’t hesitate to poke fun at each other for their fans’ amusement—after Woosung’s dynamic performance of his solo debut track “FACE,” for example, the other three members cheerfully rushed onto the stage to imitate his singing and dancing. 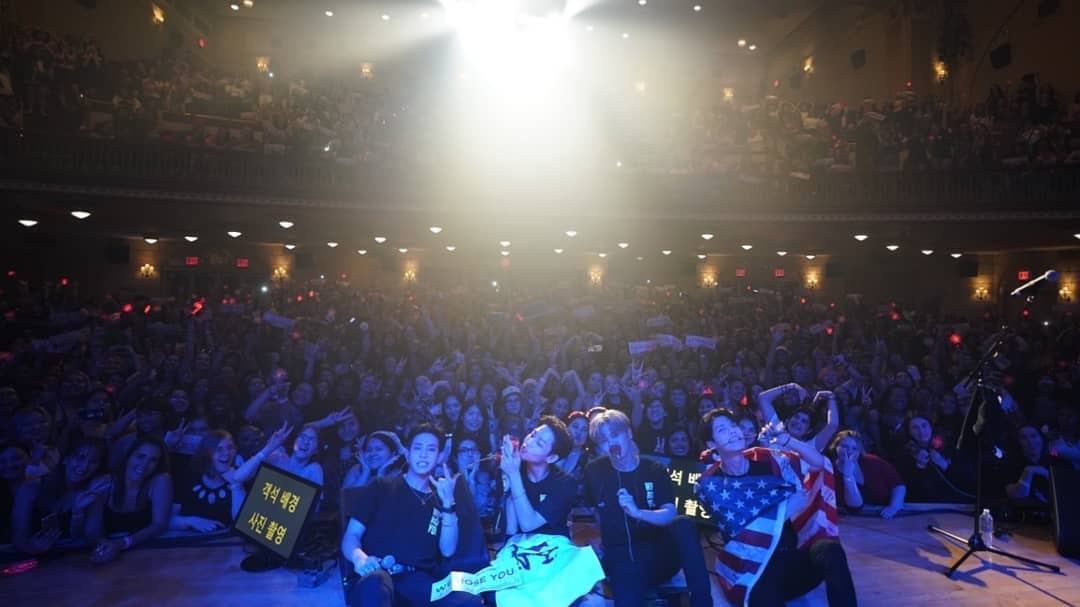 Towards the end of the night, Dojoon happily remarked, “I said earlier that this concert, this venue, this moment is going to be a historic concert. And I really think so. I want to say thank you so, so, so much for everything today.” Woosung agreed, “I don’t think we can ever forget this moment. Today. Thank you so much for coming.”

The Rose ended the evening with a buoyant, uplifting performance of their new title track “RED,” a song about rising to the sky and going higher—and if their latest New York concert was any indication, this talented band is definitely on their way up.

Special thanks to MyMusicTaste for inviting us out to the show!

Soompi Spotlight
Soompi Exclusive
The Rose
How does this article make you feel?