We’ve reached the midway point of “Melting Me Softly,” and for those of us who hung in there despite the rocky start, I applaud you! This drama is getting better week by week and is digging deep to reach new emotional depths in these latest episodes.

All the romantic relationships are heading somewhere (some good, some less good), and we even get some substantial progress in regards to the mystery.

There is also this: 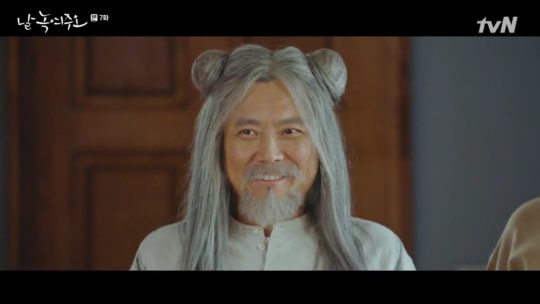 All in all, it’s been a solid two episodes, made better with the profound lines peppered throughout. So here are some lines from episodes 7 and 8 that gave us all the feels:

Warning: Spoilers for episodes 7 & 8 ahead.

“The end of love isn’t very clear. It’s not over even when it’s over”

This week, the show answered the question of how Oh Young Sun (Seo Jeong Yeon) and Hwang Byung Shim’s (Shim Hyung Tak) relationship went from 0 to 100 so quickly after Go Mi Ran (Won Jin Ah) went missing. Spoiler alert: It involves drunken coitus. Young Sun, however, insists to Mi Ran that it wasn’t a mistake. She has always had feelings for Byung Shim, even before he and Mi Ran started dating. Mi Ran quickly realizes that Young Sun is still in love with Byung Shim and thus feels apologetic for her role in the mess. But Young Sun doesn’t blame her and is willing to accept that it was the time to end her failing marriage.

My heart was aching for Young Sun during that whole conversation. She approached the whole mess of a situation with such dignity and grace even though she could have behaved like a woman scorned. You could see her trying to maintain her composure, but the emotions of pain and heartbreak were cracking through her exterior. And Mi Ran’s voiceover of the above quote – and later with the other line about the different temperatures of love – completely broke my heart. Writers, you better give Young Sun some love down the line!

After Mi Ran learns about the notion of “some,” a Korean slang phrase for the ambiguous fling stage between friends and lovers, she asks Ma Dong Chan (Ji Chang Wook) if he has heard of it before. When he admits he hasn’t, she makes fun of him for being old and not keeping up with the trend. Not to be outdone, Dong Chan quickly insists he wants to do it too! Ha! If only you knew, Dong Chan! 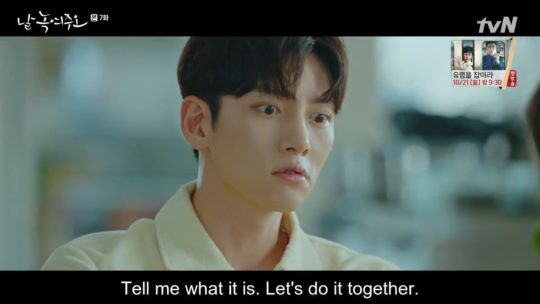 This is another moment in this week’s episodes that really delivered on the emotional front. It’s usually Mi Ran and Nam Tae’s relationship that brings tears to my eyes, but this week, it’s the Ma siblings. Dong Chan’s younger siblings are both hurting in some way – Dong Sik’s physical pain arising from his aging body, and Dong Ju’s aching heart due to her ex-ex-husband. Dong Chan wraps both of his siblings in his arms and comforts them. It’s a rare, quiet moment between these siblings who are usually rowdy and unaffectionate with each other, which makes it even more sincere. The bond between these siblings – despite what everyone has been through – is on full display here, and I’m thrilled that the show gave us this tender moment.

The hint of tears in Dong Chan’s eyes is enough to make me weep.

“A new sun will rise tomorrow.”

Raise your hands if you think it’s a good idea for Dong Chan and Mi Ran – two people who have to keep their body temperatures low – to go trekking around the jungle? Anyone? No? Well apparently our two leads didn’t get the memo, because that’s exactly what they did.

The two decide to go location scouting in the woods, and naturally, become lost while walking around. Their temperatures spike from all the exercise (again, to the surprise of no one), and Mi Ran collapses. What follows includes a selfless act, more fainting, a miraculous bout of heavy rain, a kiss, and… more fainting. It’s supposed to be all romantic and swoony, but the alternating fainting is just too hilarious for me to take seriously. 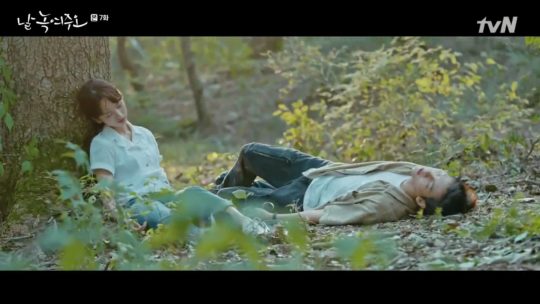 Even more hilarious (though this time in a good way), is the aftermath of the kiss. Mi Ran calls Dong Chan to apologize for the kiss, saying she thought she was going to die, and it’s not her fault that she’s still alive (LOL!). She assures herself by saying that a new sun will rise the next day and that everything can be brushed under the rug. Dong Chan’s bewilderment at her rant is just so many layers of funny and totally makes me want to see Ji Chang Wook do more comedy.

“Noona, this is what they call flirting.”

When Mi Ran tells Ji Hoon (Golden Child’s Bomin) she has to go survey the trends around town, he immediately offers to accompany her and be her guide. Ji Hoon gets to take a photo with Mi Ran and even sneakily compliments her beauty. They also try skateboarding, with Ji Hoon holding on to her when she’s struggling to keep her balance. And right at that moment, Ji Hoon says, “Noona, this is what they call flirting.” DUDE, this boy has game! I would be lying if I said my heart didn’t skip a beat right then.

With Dong Chan and Mi Ran, their relationship is (naturally) more mature and even stems from a sense of responsibility from Dong Chan’s side. But with Mi Ran and Ji Hoon, everything screams youthfulness and vibrancy, and it’s easy to get swept up in the adorableness of it all.

“I blame you.” vs. “I won’t blame you even if something happens to me.”

These two lines, spoken by Dong Chan and Mi Ran respectively, are a nice way to bookend this week’s episodes and contrasts the two pairings of Dong Chan-Ha Young and Dong Chan-Mi Ran nicely.

Continuing straight from last week, Na Ha Young (Yoon Se Ah) wishes to rekindle things with Dong Chan, but he can’t look past her betrayal and tells her plainly that he does indeed blame her. Not wanting to give up so easily, Ha Young tracks downs Dong Chan when he goes location scouting, books a room in the same hotel, and calls him up to tell him her room number. What follows is a rollercoaster of emotions… for me. My notes here: He’s knocking on her door. HE’S KNOCKING ON HER DOOR! Aaand… they’re kissing. Passionately. Wow, that’s pretty hot. These two actually look good together. Wait. It’s just in her head? It’s a fake out?? HEY!!!

A steamy kiss does wonders for my (switching of) allegiance.

The latter line is uttered at the end of episode 8, when Mi Ran turns to drinking to drown her sorrows. Her temperature spikes, and Dong Chan is alerted. He hurriedly tracks her down and tells her off for being flippant about her life. And for the first time post-freeze, Mi Ran tells Dong Chan that he’s now off the hook; that joining the experiment was her choice and her responsibility. Even if anything happens to her, she won’t blame him for it. And with that line, the dynamics between the two couples are obvious, as is the difference between Dong Chan and Mi Ran. Mi Ran comes off as the bigger person here, which is probably what prompts Dong Chan’s confession: “I might just start liking you.” *Dum dum DUUUUUM*

A. Assistant Professor Jo’s car explodes right as he steps out.

B. The Big Bad introduces himself as Lee Seok Du, which is the name of the still-frozen lookalike. So, it’s pretty clear it’s a case of stolen identity now right? Evil twin or plastic surgery?

Watch the latest episode of “Melting Me Softly” below:

Which line left the biggest impression on you this week? Also, where does your allegiance lie after that steamy kiss? Let us know in the comments below!

Belinda_C can’t get enough of Dr. Hwang’s Chun Li-hairstyle! It’s so freakin’ adorable! Talk “Melting Me Softly” and SEVENTEEN with her on Twitter!