NU’EST Talks About Gifts From Agency After Contract Renewal, Stories Of Good Deeds, And More

NU’EST shared fun stories as they appeared as guests on JTBC’s “Idol Room”!

On the October 22 broadcast, the group appeared on the show to promote their latest title track “LOVE ME.”

NU’EST opened the show with a performance of their debut track “FACE” and mesmerized the MCs with their in-sync choreography despite performing the song eight years after their debut.

MC Jung Hyung Don congratulated the group’s contract renewal with Pledis Entertainment, and the idols thanked him in return. “After we renewed our contracts, our CEO gifted us expensive watches,” said Baekho.

MC Defconn joked, “Did you renew the contract because of the watch?” and Baekho denied this with a laugh. 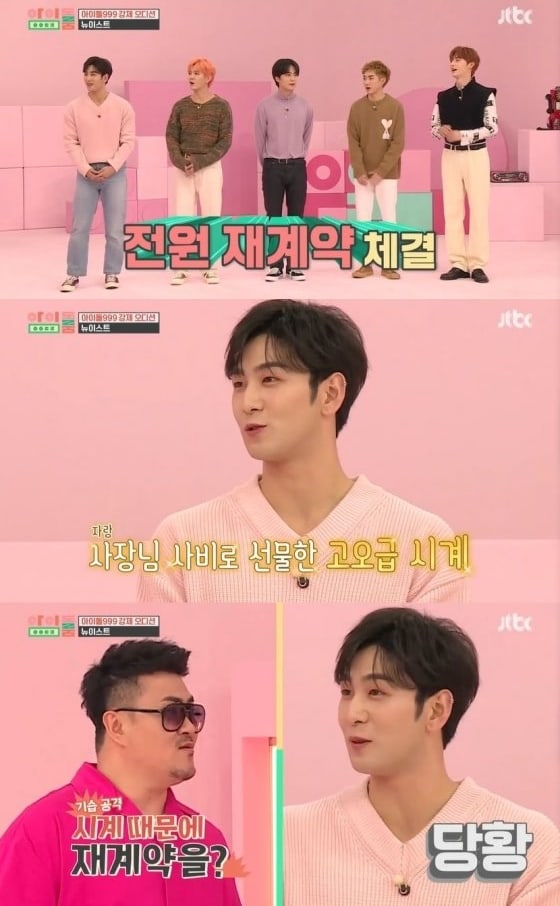 MC Jung Hyung Don also brought up a moving story about Aron, and Aron explained, “It’s embarrassing for me to talk about it, but all of the members got up when a mother sitting next to us screamed in a plane from New York to Incheon. When I looked closely, a young child was really sick. She wasn’t conscious.”

He continued, “The flight attendants searched for a doctor, and an American doctor appeared. They couldn’t communicate well, so I translated between them.”

The MC asked for more touching stories, and Aron said, “I filmed a video for the fan meeting and purchased chopped noodles for the staff.” Ren added, “There was a time when I helped a grandmother on the street. Last year around this time, a grandmother looked tired at a neighborhood that’s famous for spicy rice cakes. I pulled her handcart.”

NU’EST competed in the show’s make-believe “audition program” called “Idol 999” by fanboying over one another, rapping, and playing a dance game. In the end, Baekho was crowned as the 21st member of “Idol 999.”

Check out the MV for NU’EST’s title track “LOVE ME” here!

NU'EST
Idol Room
How does this article make you feel?