Based on a Korean webtoon, MBC’s “Extraordinary You” is a fun twist on the usual youth-romance genre, in the sense that the characters involved eventually realize that they are, well, characters in a fictional manhwa (comic). The characters have to behave according to the writer’s will, but one of the characters, Eun Dan Oh (Kim Hye Yoon), decides to rebel and take her fate into her own hands.

If you’re looking for a fun watch that is relatable, has plenty of heart, and has an intriguing storyline (trust me, it’s not just adorable fluff…though there’s that, too), then make sure you check out “Extraordinary You.” And if you need to catch up with the rest of us, or just need a reminder of what’s happened so far, here’s a quick run-down on the important stuff that has happened in the first half of the series:

Warning: Major spoilers for episodes 1 to 16 (32 episodes in total)

In the first episode, Dan Oh suspects something is wrong with her when she realizes she’s losing chunks of time. Later, after discovering a manhwa titled “Secret,” she even thinks that she can see into the future. As it turns out, Dan Oh (and everyone else) is actually living in this “Secret” manhwa world and her premonitions are a result of her “previewing” the manhwa. It’s a hard pill to swallow, but with Dried Squid Fairy’s (Lee Tae Ri) guidance, she learns to accept that she’s only a fictional character and even (full-on) embraces the knowledge that she’s the leading lady in town.

2. When Dan Oh realizes she’s only a supporting character.

Except…she’s not. It’s a bolt of lightning when Dan Oh realizes that she’s not the female lead here, nor are all the guys fawning over her. In fact, the actual leads are none other than her classmates Oh Nam Joo and Yeo Joo Da (played by Kim Young Dae and APRIL’s Naeun, respectively. The Korean words namjoo and yeojoo literally mean “male lead” and “female lead.” Dan Oh is no more than a second-tier supporting character whose sole purpose is to bring the two main leads together. *insert sad trombone*

3. When a mysterious person appears and changes everything.

According to Dried Squid Fairy, Dan Oh learns that she’s gained “self-awareness,” which means that she has free will and is able to remember everything that happens in the “Shadow.” (The “Shadow” is the space/time between the “Stages,” or scenes). Even though she can “preview” the future, she finds that she is unable to change the outcome and things will always go according to how the writer intends it to be. That is, until a mysterious male student appears and changes her fate. In one of her previews, she sees herself falling and breaking her leg, but when the scene actually unfolds, the mysterious guy (who wasn’t in her preview) breaks her fall, and she merely skins her knee.

4. When the “self-aware” kids poke fun at the cheesiness of it all.

One reason that makes “Extraordinary You” such a fun watch is that it stands out amongst the crowd. These youth-romance genres are usually chock full of clichés, but this drama not only intentionally leans into the cheesiness of it al, but also makes fun of it at the same time. You can’t help but love Dan Oh and Lee Do Hwa (Jung Gun Joo) more when they shudder at Nam Joo’s cringey lines or laugh when Do Hwa points out continuity errors about the dry ground when it supposedly rained a second ago. It’s always great when the characters voice out just what you’re thinking.

5. When Dan Oh gives the mysterious student a name.

The students go jungle trekking, and even though Dan Oh memorizes the route beforehand, she still becomes lost in the woods (as per the writer’s will). No. 13 (the mysterious, nameless student from before; played by the absolutely swoon-worthy Rowoon from SF9) appears in front of her and leads her to a clearing with a small lake. There, the two lie on the grass and gaze at the night sky, and it is then when Dan Oh decides to name him “Ha Roo” because she feels like her day can change now thanks to him. (Haroo means “day”).

6. When things start to go wrong.

Thanks to Dan Oh, the originally nameless extra now has a name. But with a name comes consequences. As per Dried Squid Fairy, giving a name to a background extra can only lead to disaster. In this case, it causes Dan Oh’s fiancé, Baek Kyung (Lee Jae Wook), to become jealous of Dan Oh and Ha Roo’s closeness. Baek Kyung assaults Ha Roo (while in a Stage), which indicates that Ha Roo is now part of the official storyline. Yet, because of these changes, parts of Dan Oh’s original story also change, including memories of Dan Oh’s mother that now no longer exist.

Since Ha Roo has been mostly silent (he literally only has one line in the first six episodes), it’s nice to be able to hear how he comes to notice Dan Oh and how he comes to realize he has a voice. It’s a story of self-discovery, but there’s also something especially romantic about Ha Roo’s monologue (at the start of episode 9) – “Why do I know your name when I don’t even know mine,” and, “Why do I always have my eyes on you even when I don’t know who I am myself.” Hearing those words spoken in that deep voice of his just makes us swoon.

8. When Baek Kyung and Dan Oh steal the spotlight.

The more Dan Oh, Ha Roo, and Do Hwa mess with the Stage, the more things go off the rails. This become painstakingly obvious during Nam Joo’s birthday party, where Dan Oh initially “previews” Nam Joo declaring in front of the whole party that Joo Da is the only girl for him. But with Do Hwa occupying Joo Da during that important scene, the Stage forces Baek Kyung and Dan Oh to fill in for the leads instead. It’s a sobering scene to watch as the kids (and us viewers) once again realize just how helpless they are against the writer and the Stage.

With all the changes happening, the pain in Ha Roo’s hand worsens, and Dried Squid Fairy even warns that he may disappear as a punishment for messing with the writer’s scheme of things. While at first he resigns to staying in his corner, Ha Roo eventually decides to follow his heart, even if it means paying a steep price. He refuses to be someone so unimportant to the story that he can just disappear and not be noticed and instead be the person who can change someone else’s fate.

This is not okay. I am not okay.

After Baek Kyung stands Dan Oh up on their movie date (though he does call to cancel, so…progress?), Ha Roo steps in to take his place instead. All the moments Dan Oh’s friend mentioned – brushing of the hand while eating popcorn, sharing a straw etc. – happen with Ha Roo, and Dan Oh is visibly affected by all these heart-fluttering moments (while Ha Roo remains hilariously nonchalant). And in an important development, Baek Kyung rushes to the theater all jealous to see Dan Oh and Ha Roo hanging out together, even though his intended story line was obviously to desert Dan Oh at the theater.

After a trip to the hospital, Dan Oh returns to school to discover that Ha Roo has gone missing. In fact, it seems like he’s been erased from existence. Other than Do Hwa and Baek Kyung (who is also now self-aware), no one remembers a student named Ha Roo, and his seat as well as his number are now occupied by someone else. Dan Oh is so distraught by this development that she resigns herself to accepting the writer’s will and promises not to rebel anymore in fear of bringing more harm. One good thing out all of this is that we finally see that the self-aware Baek Kyung is waaay less of a jerk than Stage Baek Kyung, and he even offers to help Dan Oh change her fate. 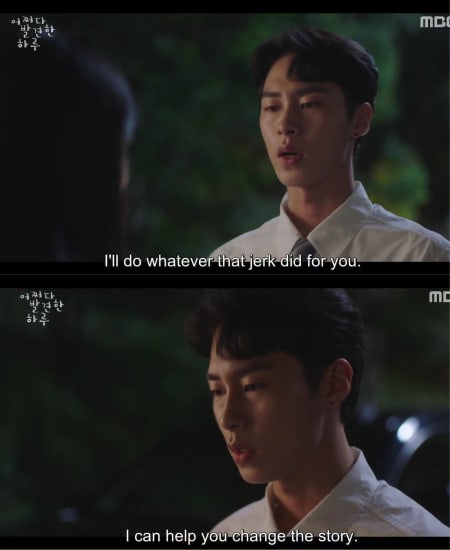 Because jerks get thrown into pools:

We were all undeniably cheering along with Dan Oh when Ha Roo finally returned. At least, we were cheering all the way up until we realized that this Ha Roo is no longer the Ha Roo that we knew and loved. Ha Roo 2.0, though remaining self-aware, doesn’t have any of 1.0’s memories, and so he doesn’t remember his friendship with Dan Oh. This time around, Ha Roo 2.0 is an official supporting character complete with a character description (he’s Baek Kyung’s BFF). He also has constant flashes of memories to a sageuk era-styled version of himself and Dan Oh, which – along with the fuss around the “Trumpet Flower” manhwa – strongly indicates that this isn’t their first lifetime together!

The first of many falls. Dan Oh should probably stop climbing on chairs maybe?

Have you been watching “Extraordinary You”? If you have, are you as taken by Rowoon’s smile as I am? Head to the comments below and let us know what you’ve enjoyed the most in the first half!

Watch the latest episodes of “Extraordinary You” below:

Belinda_C fell in love with this drama right away! She may have also gone on a Rowoon binge after seeing him here. Talk “Extraordinary You” and SEVENTEEN with her on Twitter!