Exclusive: ONEUS Just Kicked Off Their 1st U.S. Tour In New York, And It Was “LIT”

“Did you make eye contact with all of us?” asked ONEUS’s Leedo, at one point early on in the group’s first-ever New York concert last night. “No? You didn’t?”

It was the first stop of ONEUS’s U.S. tour “2019 ONEUS ‘FLY WITH US’ TOUR IN USA,” and the group had just finished performing their song “Eye Contact,” a catchy B-side from their debut mini album “Light Us.” True to the song’s title, the members visibly made efforts to make eye contact with their fans throughout the dance number—but the idols still weren’t satisfied.

“Can you turn the [theater] lights on so that we can see the audience?” asked Leedo, before he and his bandmates rushed to the front of the stage so that they could try and get as close to their fans as possible. To the cheers of the crowd, the ONEUS members ran back and forth across the stage, attempting to make eye contact and interact with as many audience members as they could in each section of the venue—even the second floor.

Above all else, it was this kind of obvious excitement about getting up close and personal with their fans that made the first stop of ONEUS’s first U.S. tour “FLY WITH US” so memorable. On November 3 local time, the rookie group lit up The Town Hall in New York with a dynamic concert that highlighted both their immense potential and their endearing love for TO MOON, ONEUS’s official fandom. 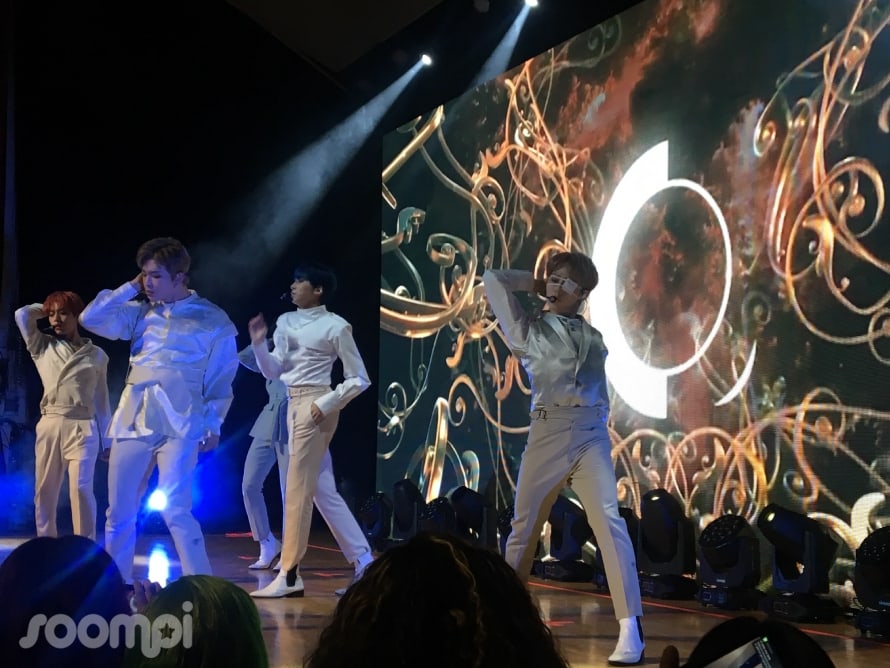 After the crowd went wild during the first two songs of the night (particularly their razor-sharp performance of their powerful debut track “Valkyrie“), the ONEUS members humbly expressed their amazement and gratitude. Ravn remarked, “We’ve always wanted to come to the U.S. and New York, and your cheers were so much louder than I expected, which I find unbelievable. Your response was so amazing that I can’t believe we’re abroad right now. I’m so moved that we can become one like this through music.”

Hwanwoong chimed in, “As soon as we entered, even before the first song started, I could hear so many cheers. You gave me so much strength and energy even before we began performing.” Xion agreed, “The sound of your cheers was loud enough to make it past our in-ear monitors, which was amazing.”

Leedo added, “To be honest, right up until we stepped on stage, I kept wondering, ‘Would a lot of people come to see us?’ Even when we were performing, I couldn’t really see the audience, so I didn’t get a sense of it. But I see now that a lot of people came. I really didn’t know that so many people would come. Thank you so much, and I love you.” 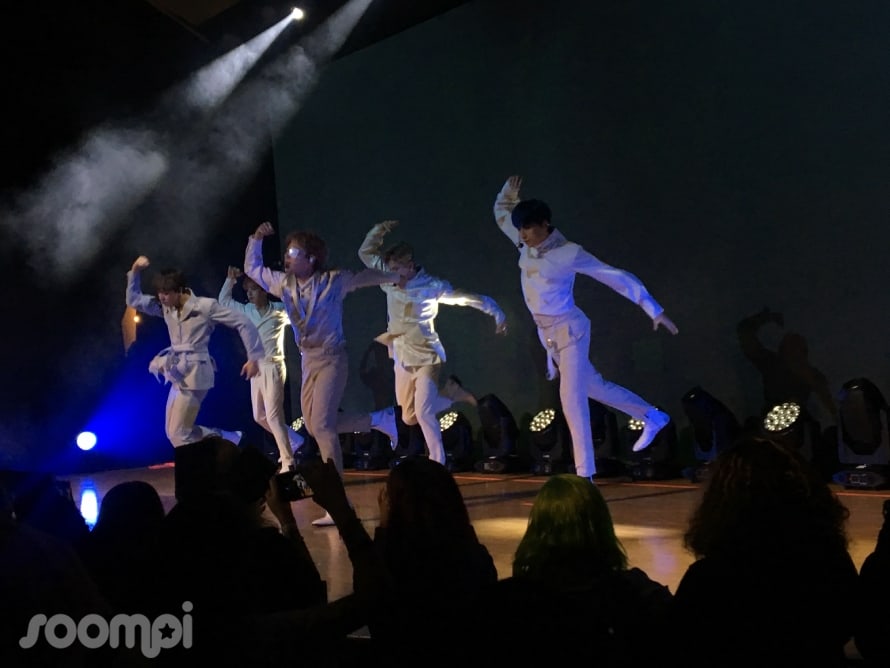 Unfortunately, Seoho was unable to participate in the concert due to health issues (although he is currently sitting out the U.S. tour, RBW and MyMusicTaste have stated that he may join the group for later stops if he recovers more quickly than expected). But in one of the most adorable parts of the evening, his bandmates made up for his absence by lovingly carrying around a plushie they called the “Seoho doll” and referring to it as “Seoho hyung.”

Not only did the members affectionately tote the Seoho doll—which sported an American flag as a scarf—around during their remarks, but they even performed their encore song and hilariously took their final bow together with the doll.

“Seoho was really waiting for and looking forward to our tour more than anyone, and I especially miss him tonight,” said Keonhee. “But we will work hard to make up for Seoho’s absence during our performances. And as much as we miss Seoho, Seoho would also want the fans to cheer that much more for us tonight.”

However, even with main vocalist Seoho missing, ONEUS still delivered flawless performances throughout the show. The group also proved their versatility by seamlessly switching gears between intense, hard-hitting songs like “Twilight“—to which they added a powerful dance break—and slower ballads like “White Night,” during which they asked the crowd to turn on their cell phone flashlights to illuminate the venue with a beautiful white ocean of light.

One of the many highlights of the evening was ONEUS’s infectiously high-energy rendition of their latest title track “LIT,” during which the entire venue seemed to be singing along to the irresistible hook. Another was the dance segment of the concert, in which ONEUS showed off their moves to various English-language songs including Lil Nas X’s “Old Town Road,” The Weeknd’s “The Hills,” Justin Timberlake’s “Murder,” and Nao’s “Bad Blood.”

At the end of the night, the ONEUS members breathlessly reflected on what had been a successful start to their first-ever stateside tour. Keonhee commented, “We came to New York for the first stop of our U.S. tour, and we realized that even in a place so far away from [Korea], there are many people who really love us and are cheering us on. We’ll use this as inspiration to work even harder and become a ONEUS that shows you even better things in the future. Thank you, New York!”

Hwanwoong added, “It hasn’t even been a year since we debuted, and as we celebrate the 300th day since our debut, it feels like a really meaningful day because we were able to meet our TO MOON the other side of the globe. It’s the 300th day of our debut, and it’s also the day of our first concert on the other side of the globe. I’m so happy that we were able to experience our first stop with you today. I love you guys.”

Xion shared, “Actually, this is my first time coming to New York, and because New York TO MOON are so passionate, I think I’ve made only good memories during my time here. Unfortunately, we weren’t able to come together with Seoho this time, but the next time we come to New York to hold a concert, we’ll definitely come with Seoho no matter what. Please keep loving ONEUS, and let’s see each other again next time. Thank you! I love you!”

Ravn declared, “Let’s stay together for thousands of years to come, for the rest of our lives!” and Keonhee chimed in, “If you call us again, we’ll come running back to New York whenever!”

The crowd responded with passionate screams, seemingly indicating that though this U.S. tour is ONEUS’s first, it may be far from their last. It was a night full of energy and promise, one that left the audience looking forward to what these promising young rookies have in store next. 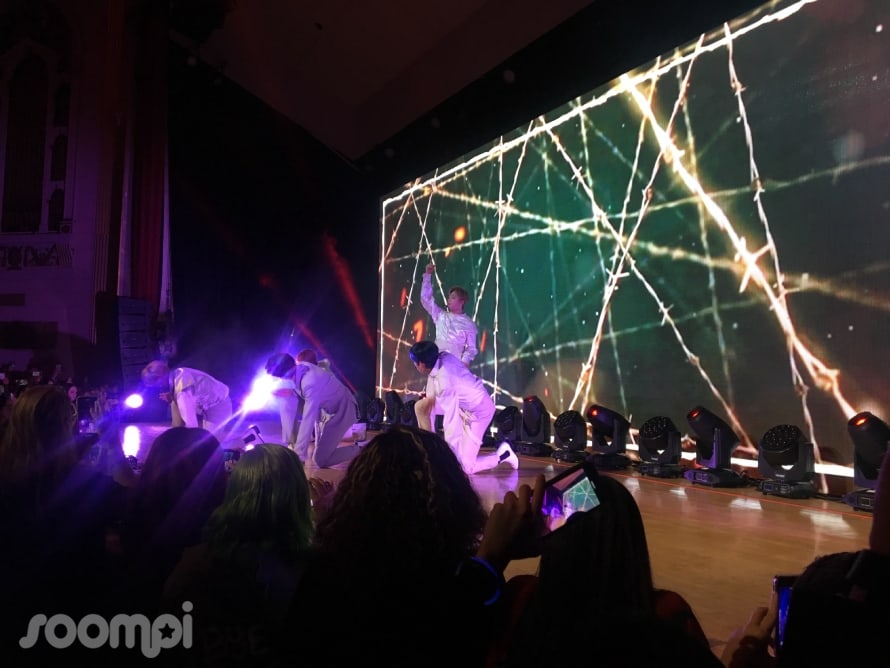 Special thanks to MyMusicTaste for inviting us out to the show!

Soompi Spotlight
Soompi Exclusive
ONEUS
How does this article make you feel?