Dried Squid Fairy, Baek Kyung, and Ha Roo say goodbye to their past.

And there we have it ladies and gentleman, the finale of “Extraordinary You.” The drama started out strong and easily hooked us in from the get go with its youthfulness and vibrancy, as well as the ability to not take itself too seriously and make fun of its own genre. Somewhere in the middle though, the writing did falter a bit, with the drama repeating the same themes over and over again — “We need to change the Stage” vs. “Oh no, we can’t change the Stage!” — as well as some flip-flopping on certain character developments. But as a whole, “Extraordinary You” has been a fun, great watch with well-cast characters, a refreshing and heartfelt storyline, as well as an addictive OST. 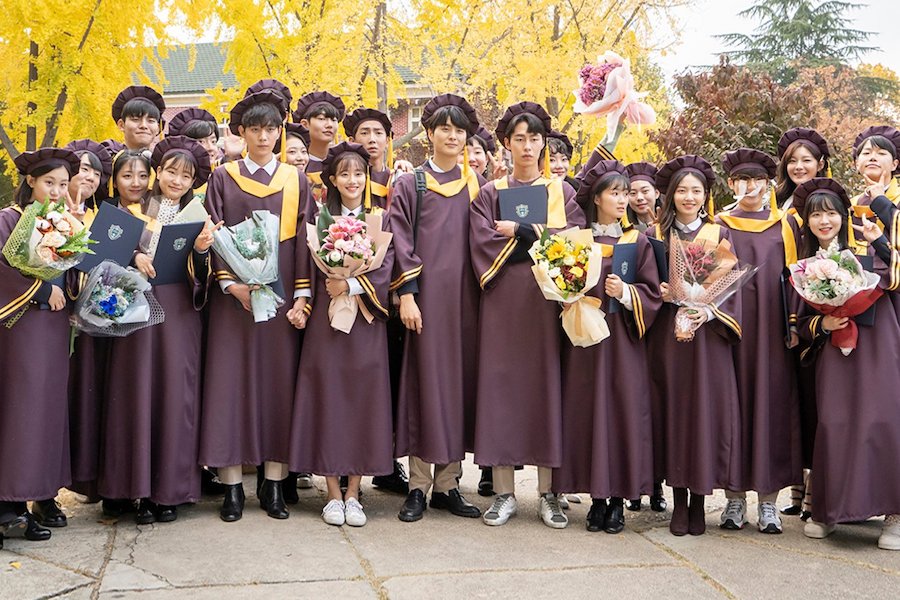 So for one last time, before we bid our final goodbyes to this little gem of a drama, let’s check in to see where and how our favorite characters end up: 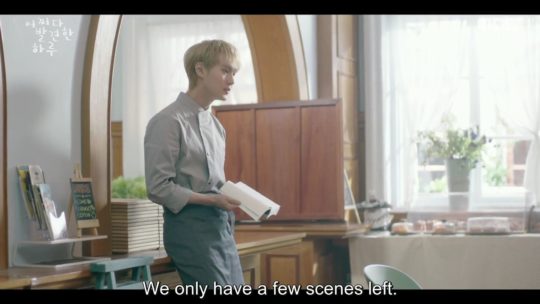 Warning: Major spoilers for episodes 29-32 ahead. If you don’t want to know how the drama ends, run!

For the most part, I really like how things end for these two, as well as the love triangle as a whole. As it turns out, Nam Joo (Kim Young Dae) is an illegitimate child (of course he is!), so he won’t be inheriting his father’s fortune, which lowers his social status at school. But he refuses to go abroad to hide or let his mother dictate his life anymore and even declares his true identity in front of the whole school. Nam Joo is obviously written to be a cliché, but this side of him really exudes the heartthrob male lead aura and proves that he’s deserving of Joo Da (even if he still loves going around declaring stuff “in the name of A3”).

As for Joo Da (APRIL’s Naeun), she brings up the idea of dating Nam Joo for three days of the week, Do Hwa (Jung Gun Joo) during the other three, and having Sundays for herself.

Girl knows what she wants!

Ha! Jokes aside, she decides that she is happy with Nam Joo, especially since Nam Joo needs her even more after his birth revelation. And in the “one year later” tag, the two are still happily together and even becoming more and more alike. Though it’s an expected ending for the pair — they are technically the leads of the manhwa after all — it’s still sweet nonetheless.

After Dan Oh (Kim Hye Yoon) reverts back to her original set-up, we see the sweetest and most adorable montage of Baek Kyung (Lee Jae Wook) and Dan Oh 2.0 on a date, and all I could think was, “Stop playing with my heart, Writer!” And these last episodes again prove what an amazing character-slash-second lead Baek Kyung would have been if only they hadn’t seesawed with his character development!

Baek Kyung later comes to terms with the fact that this Dan Oh isn’t the real Dan Oh and decides to help her by asking Ha Roo (SF9’s Rowoon) to change the Stage and having Ha Roo meet Dan Oh in his stead. This eventually leads to Dan Oh regaining her self-awareness and memories.

And while I had already been tearing up before, the moment that kick-started my bawling was when Dan Oh and Baek Kyung have a heart-to-heart, and she tells him that the “Secret” Dan Oh thanks him, while “Trumpet Flower” Dan Oh forgives him. I am so glad we got to spend some quality time with this pair before everything ended and that they got to have the closure they deserved.

Other than the infamous “A3 triangle walk,” we barely got many scenes between the three of them, so this last A3 scene is as magical as it could have been. Do Hwa is still hilariously affectionate and savage, Baek Kyung actually shows appreciation for his friends, and Nam Joo gives us the cringiest line ever by calling them “my boys.” In other words, perfection! The whole scene is ridiculously cheesy, but it still gets you right in the feels. Ah, I miss them already!

Also, can I just say how much I love Do Hwa? Case in point:

Following from last week, Ha Roo tries his best to help Dan Oh 2.0 regain her memories, and it’s just heartbreaking watching him recreate their scenes together, trying to get her to remember him.

Later, with Baek Kyung’s help and after a magical back bump, Dan Oh regains her awareness, and the two slip back into lovey-dovey mode. Dan Oh also reveals that she has a list of couple-y she wants to do with Ha Roo. And so, our boyfriend of the year sets about completing it, including making super cute paper-chain necklaces as their couple item.

But their happy times don’t last because the manhwa is nearing it’s end, and the writer is starting to erase their world with classmates and locations gradually disappearing. And it’s not long before Ha Roo himself disappears for one last time in the world of “Secret”.

Fast forward to one year later, and we see the kids at their graduation. Dan Oh writes Ha Roo’s name on her graduation diploma, and it’s not long before she hears the final sound of a book closing.

The story then picks up with a long-haired Dan Oh running around a university campus. It’s a new manhwa but with many similar faces. This Dan Oh comes across a sketch of “Secret” Dan Oh and Ha Roo sitting on a bench, and so she’s compelled to find that bench on their campus. There, she comes across none other than Ha Roo (now sporting a shorter hair cut), and the two finally reunite.

We learn pretty early on in the final episodes that Soo Hyang is actually self-aware, and it puts the interactions between her and Dried Squid Fairy (Lee Tae Ri) in a new light — a very bittersweet light. But it isn’t until “one year later” does she reveal her self-awareness to DSF, admitting that she couldn’t stay away and that she misses him. I’m really glad the two had this little moment together right as the manhwa is about to finish. And yet, we know that this is probably the best that it’s going to get for them, stealing little moments here and there and just watching each other from afar. It taints their sweet reunion with the bittersweetness of reality, and unfortunately, due to the set-up of the drama, there is no way around it. Which brings us to…

Aaaah… the ending. The swift reunion between Ha Roo and Dan Oh in another manhwa feels a bit like a cop out. Did Dan Oh suddenly remember Ha Roo after seeing the sketch? Did Ha Roo suddenly gain awareness when Dan Oh turned away? Because there was no indication that they remembered each other prior to that moment, right? It felt flimsily thrown together just to give the viewers a happy ending.

Yet the thing is, unlike with other dramas where we can imagine our OTP having a life after “happily ever after,” we know that there won’t be one for these two unless the Writer writes it for them. And if they ever do try to rebel and fight for their happiness, things are going to go awry. Again. It’s just feels like a bucket of cold harsh reality being poured on us and prevents us from fully being happy or satisfied. But again, with this set-up (I feel like Baek Kyung right now, constantly saying “set-up”), the ending was pretty much set in stone and without an obvious way around it.

So in the end, the (actual real life) writer went the obvious route and gave us a clichéd ending. Which is ironic since they spent most of the series making fun of and subverting clichés. It’s kind of a bummer, but does it make “Extraordinary You” any less extraordinary? I’d say not. Not when we got to hang out with these guys:

That being said, I still have one last question: Just what is the point of Baek Kyung’s brother, Joon Hyun? Didn’t they place a little too much emphasis on a character that had absolutely no significance in the story?

Watch the “Extraordinary You” finale below:

How did everyone find the ending? And was anyone else bawling through most of the finale? Let us know and leave your thoughts about the drama as a whole below.

Belinda_C teared up again just making those gifs. That’s how much those scenes got to her. Talk “Extraordinary You” and SEVENTEEN with her on Twitter!