First Impressions: All The Different Flavors That Made “Chocolate” A Solid Premiere

“Chocolate” is a character-driven drama that revolves around the ideas of healing and comfort. Our two main leads, Lee Kang (Yoon Kye Sang) and Moon Cha Young (Ha Ji Won), meet when they are children. And though it’s only for a short while, his kindness and her love for food leave a strong impression on each other. Fast forward many years, and after various personal tragedies, the two meet again in adulthood. She’s now a chef who uses food to comfort lost souls, and he’s a doctor who heals physical pain. And from there, their story starts.

Because this a story that involves food, I thought it’d be appropriate to structure this recap-review around the flavors we experienced throughout the two episodes. So… dig in!

Warning: Spoilers for the premiere episodes ahead!

Little Kang and little Cha Young are seriously so adorable! Little Kang has the biggest and most innocent smile, looking like he’s completely loving life. And any girl who cries because she’s enjoying food so much gets a win in my book!

The two first meet when Kang catches Cha Young sneaking food left out in the yard. Except, that food is meant for cows. 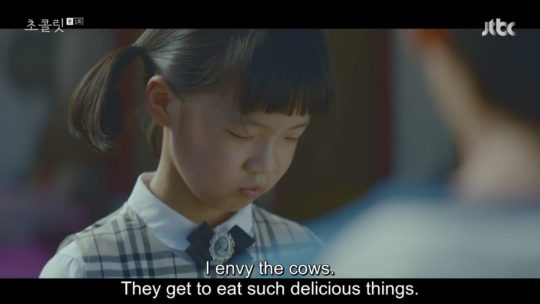 Kang asks Cha Young to stay and he’ll get her some proper food, telling her that she doesn’t need to pay for it and that she is always welcome to go back to the restaurant for a free meal. Unfortunately, she doesn’t make it back again as soon after, Cha Young’s mother decides to move the family back up to Seoul.

Many years later, the now-adults cross paths again when Cha Young sees food left out in the open and sneaks a few bites. Looks like that’s one habit she hasn’t kicked, but at least this time the food is actually for human consumption. In fact, the food is left out by Lee Kang himself when he had to step away for a bit.

Cha Young recognizes Lee Kang’s name and recalls their childhood memory, and so she wanders around the hospital semi-stalking Kang to see if she’s got the right person. But before she can make a move, she hears that Kang has been dispatched to Libya.

It’s hard to run away when you’re attached to an IV drip.

And that’s when Kang’s best friend, Min Seong, comes in. After meeting each other by chance, Min Seong becomes interested in Cha Young and decides to woo her. 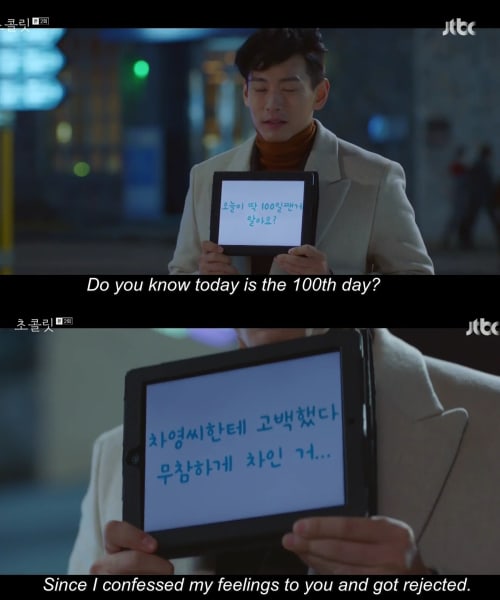 Though she initially rejects him, he eventually wins her over, right when Kang returns to Korea, alive and well. (She thought he had died in an explosion while in Libya.) And because of Min Seong and Kang’s friendship, she can’t manage to avoid Kang, and that’s when she decides to go to somewhere where he isn’t — Greece.

To be honest, the Min Seong-Cha Young couple lasted all of five minutes (on screen), but even so, they were already so sweet together during that short amount of time. His self-deprecating manner when he asks her out and the way she just blurts out all her faults in hopes to manage his expectations are all adorable. And can we talk about how trusting a friend/boyfriend Min Seong is that he would suggest his girlfriend and his best friend watch a movie alone together? It seems like a trusting, healthy relationship in the making, but alas, they were not meant to be even from the start. 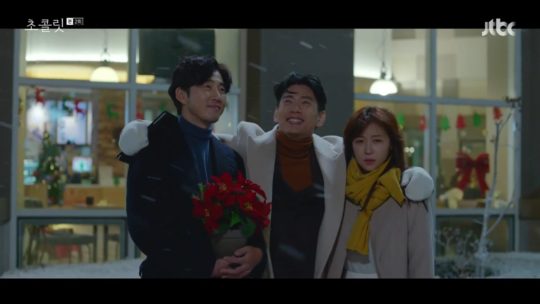 As for our OTP, I’m already so excited to see adult Kang and adult Cha Young getting to know each other. Cha Young is now living Kang’s childhood dream, and I’m sure she’s his way back to happiness and he’s her salvation in terms of dealing with her traumas. It’s especially sad to see the young boy who was once brimming with life to be so burdened, and I just want him to be happy again.

We first get a glimpse of another central character, young Jun, during the yester-years portion. Here’s what you should know about Jun: He’s Kang’s older cousin; he dresses really smartly, bowtie and all; he has perfectly coiffed hair; AND he’s a complete nightmare. Feeling jealous and threatened about the sudden appearance of Kang — a male relative who also has stake on his inheritance — he takes his insecurities out on Kang’s dog. And when Kang comes to stop him, politely I might add, he throws a rock at Kang’s head, and the two start an all-out brawl which leads to them falling off the pier, into the sea, and to the hospital.

The first time we meet adult Jun (Jang Seung Jo; whom I loved in “Familiar Wife“) is no better. He’s one of the doctors working at their hospital, and he’s impatient and annoyed with his patient who’s quivering under a bed, clearly traumatized. We later learn that he’s gone through a traumatic event himself, but that happened after we met his horrendous childhood self, so PTSD isn’t to blame. It’s not hard to imagine where he gets his terrible bedside manner from — *cough horrible family cough* — but for it to manifest so early in his childhood, I’m not sure whether I should be more horrified or have pity. His jealousy towards Kang continues to drive their relationship even in adulthood, and it’s not looking like it’ll change anytime soon.

(In case you’re wondering what sourness has to do with jealousy: In Chinese, being jealous is translated into “eating vinegar,” thus the sourness.)

The saltiness here isn’t in a resentful sense, but rather the saltiness that comes from tears. And there were a few moments in the premiere episodes that had my tear ducts working, especially when Kang, while on the brink of death, imagines having a conversation with his deceased mother. It’s a testament to how well these characters have been set up that you immediately feel the weight and pain of that scene even though we’ve only spent so little time with them. The whole scene unfolds beautifully (though Kang suddenly calling his mom by her name felt a little jarring), and you can’t help but feel sorry that his loving mother died so early, leaving him with a pack of wolves instead.

Another scene that is just as heartwrenching to watch is the one where Kang cries outside the operation room after realizing he’s unable to save his friend, Min Seong. When Kang finds out that Min Seong is in the hospital, he forgoes a very important surgery on a celebrity and chooses to operate on his friend instead. (Which, from my years of watching medical dramas, seems like a bad idea). We know how important this friendship is to Kang, and the thought of losing his friend is too much for him to handle, causing him to break down in tears after the failed surgery. And with Min Seong’s dad at his side comforting him just again shows how strong the bond between the two men are and that the affection transcends to other family members.

We later find out that Min Seong didn’t actually die on the operating table (I’m assuming Kang couldn’t remove the brain tumor?) and has instead been admitted to a hospice. But this doesn’t take away from the fact that it’s painful to watch a grown man break down in tears while grappling with defeat and loss.

The pack of wolves mentioned above refers to Jun’s family — his parents and paternal grandmother to be specific. This family of people is so terrible that watching their scenes will leave a bitter taste in your mouth.

We’re introduced to the Lee family matriarch when she brings her son, daughter-in-law, and grandson to Wando to find her long-lost grandson Kang. And right in front of her son and daughter-in-law, she not only belittles them, but also makes her intentions clear — she wants to raise Kang as another potential heir to her dynasty. But if you think she’s just a straight-shooting old lady who wisely wants to prevent her greedy son from swallowing all her inheritance, then you’re in for a rude awakening. She really is just a cold-hearted person who wants to use Kang as a pawn.

Kang’s uncle (Jun’s father) is no better. He dispatches Kang to Libya, a warring nation, because “no one else wants to go.” And when Kang gets critically injured during his time there, he gives the order for the medical team to pull Kang off the ventilator. With the way this family behaves and with how they treat Kang, I am already looking forward to the day when they get their comeuppance. Then, it’ll be sweet, sweet revenge.

Seriously, what kind of monsters continue eating when a child is begging for his mom’s life?

I really enjoyed the way the drama weaved through these first two episodes. So much story is told, but it never feels like groundwork for groundwork’s sake, and that’s largely due to the fact that the story is centered around the characters. Even with the concept of time, the drama just keeps moving along, skipping months or decades at a time without explicitly pointing it out. By taking away the bells and whistles, we’re left with something much more concentrated and intimate. Just like its theme, these types of stories are like good comfort food — nourishing both your body and mind. And with the two talented and charismatic leads of Yoon Kye Sang and Ha Ji Won at the helm, there’s no doubt we’ll be in for a yummy, flavorful treat!

Have you seen the first two episodes of “Chocolate”? If you have, what were the parts you enjoyed the most? Let us know in the comments below!

Belinda_C got hungry seeing all those shots of yummy food. She also loved SEVENTEEN’s OST for this drama “Sweetest Thing.” Talk “Chocolate,” chocolates, and SEVENTEEN with her on Twitter!