BTS’ Suga has blown everyone away with his impactful comeback trailer “Interlude: Shadow.”

The group has a tradition of beginning teasers for their new albums by having one member release a solo track and MV, with the song then included as the intro for their album. As BTS prepares to drop their album “Map of the Soul: 7” on February 21, Suga got things started off right by sharing “Interlude: Shadow” on January 10 at midnight KST.

While their fans ARMY don’t always know when they’re about to get hit with a new release from BTS (giving the whole fandom “midnight KST phobia”), this time around the group gave a heads up with a comeback map that serves as a teaser schedule.

Knowing the comeback trailer was on its way, ARMY collectively tried to get ready before its release and trended #ShadowIsComing at No. 1 worldwide on Twitter as they waited for 12 a.m. KST.

i have 53 minutes left to prepare my heart #ShadowisComing pic.twitter.com/2dtd4kvPeq

Suga’s trailer, named the “Yoontro” by fans after the rapper’s given name Yoongi, turned out to be a raw, honest, and powerful roller coaster of a track that deals with the dark side of fame, struggles with ambition and identity, and more.

Following its release, several hashtags and topics have been trending worldwide as fans tweet their reactions and praise for Suga’s new song and MV. 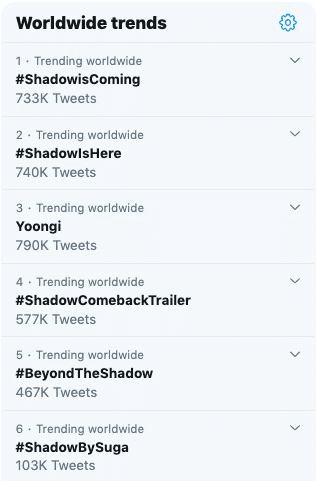 ARMY is sharing their interpretations of the MV with some insightful posts.

in the mv those are yoongi's persona and shadow!!! pic.twitter.com/berfyedeG5

at the very beginning of shadow when yoongi lists all his wishes and dreams (wanting to be rich, wanting to be the king etc) i was reminded of his no more dream verse it’s just that now… now yoongi knows those things come with consequences.

they show the crowd being so absorbed in filming SUGA on stage that when the real min yoongi turns around and says ‘i wanna be me’ no one notices pic.twitter.com/kOxlhgg8lQ

did yoongi in shadow just called out sasaengs that follows and captures them for money? DAMN #ShadowisComing pic.twitter.com/6AmnjFbEeK

Fans have highlighted how the themes addressed in the song are ones that Suga’s been talking about for a while by reminding everyone of impactful quotes from the artist.

the fact that the stuff happening in bts mv’s aren’t just simple concepts but stuff they actually go through in real life #ShadowIsHere pic.twitter.com/9HGszmJAsv

ARMY detectives have also spotted possible connections and references to many of BTS’s previous releases. Some of the most clear references are to the intro off their 2013 first mini album “O!RUL8,2?” and to RM’s intro for “Map of the Soul: Persona.”

persona: do you wanna go?

shadow: don't let me down

persona: do you wanna fly?

persona is how someone's character is perceived by others, and shadow means the dark side of our personality. both are a part of one's soul, but different #ShadowisComing pic.twitter.com/N0b9o1gnGW

According to jung’s theory, shadow and persona are polar opposites of each other. In the mv’s we can see both of them say opposite words ?#ShadowIsHere @BTS_twt pic.twitter.com/Bdc3NyqpP0

The topic also has parallels with one of the concepts of their 2018 album “Love Yourself: Answer,” which tackled the encroachment on personal space that comes with fame.

Many have noted how the aesthetics and cinematography of the MV for the track are powerful and chilling.

THE MOMENT WHEN YOONGI SAID 'PAUSE' AND EVERYTHING STOPPED JUST GAVE ME CHILLS #ShadowisComing #ShadowIsHere pic.twitter.com/NPe86CcFzs

While the track and its topic might feel overwhelming, ARMY’s still being as hilarious as always.

NAMJOON SAID “I JUST WANNA FLY” AND YOONGI SAID “DONT LET ME FLY” SO ARE WE SUPPOSED TO HELP THEM FLY OR NOT??? WHAT THE FUCK DO WE DO WE CANT LET THEM BOTH DOWN #ShadowisComing #SHADOW#ShadowComebackTrailer

yoongi: i wanna be rich

CAN WE TALK HOW YOONGI STEPPED ON ALL OF US…. LIKE…. LITERALLY?????? pic.twitter.com/PzV49wKcM6

This is what i imagine is happening rn at the BTS appartement#ShadowIsHere #ShadowisComing @BTS_twt pic.twitter.com/x753ukPyAw

What are your thoughts on Suga’s “Shadow”?

BTS
Soompi Spotlight
Suga
How does this article make you feel?