Gaon Chart has revealed its chart rankings for the week of March 1 to 7!

NCT 127 and Block B’s Zico both earned double crowns this week: NCT 127 took No. 1 on both the physical album chart and the digital download chart with their new album “Neo Zone” and its accompanying title track “Kick It” respectively. Meanwhile, Zico’s smash hit “Any Song” topped both the overall digital chart and the streaming chart for the week.

Congratulations to both NCT 127 and Zico!

NCT 127’s second studio album “Neo Zone” debuted at No. 1 on this week’s physical album chart, followed by IZ*ONE’s first full-length album “BLOOM*IZ” at No. 2. BTOB’s Yook Sungjae’s first solo album “YOOK O’Clock” entered the chart at No. 3, while ATEEZ’s “TREASURE EPILOGUE : Action To Answer” held onto its spot at No. 4. Finally, BTS’s latest album “Map of the Soul: 7” rounded out the top five for the week. 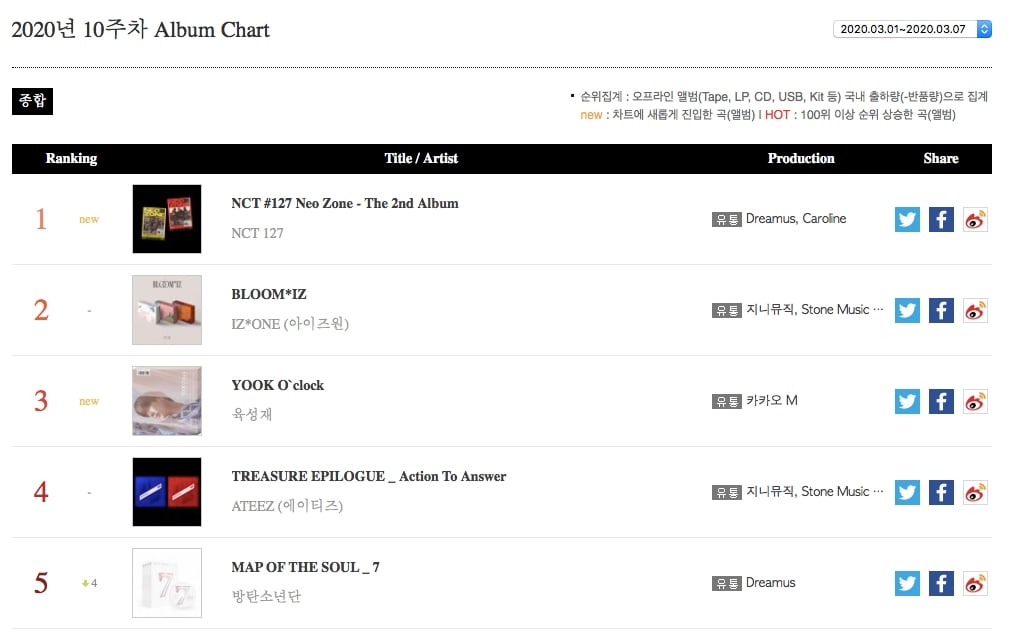 NCT 127’s new title track “Kick It” debuted at No. 1 on the digital download chart this week, while BTS’s “ON” stayed strong at No. 2. Zico’s “Any Song” and IU’s “I Give You My Heart” (from the OST of “Crash Landing on You”) maintained their positions at No. 3 and No. 4 respectively, trailed by Gaho’s “Start” (from the OST of JTBC’s “Itaewon Class”) at No. 5. 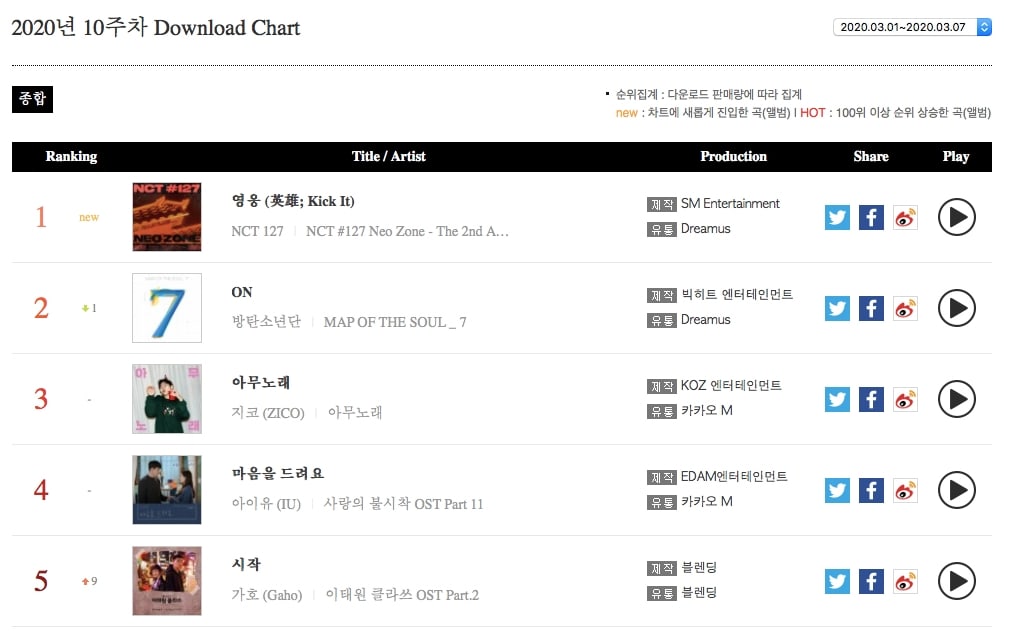 The top five songs on the overall digital chart and the streaming chart were exactly the same this week: Zico’s “Any Song” topped both charts, followed by IU’s “I Give You My Heart” at No. 2, BTS’s “ON” at No. 3, Changmo’s “METEOR” at No. 4, and IZ*ONE’s “FIESTA” at No. 5. 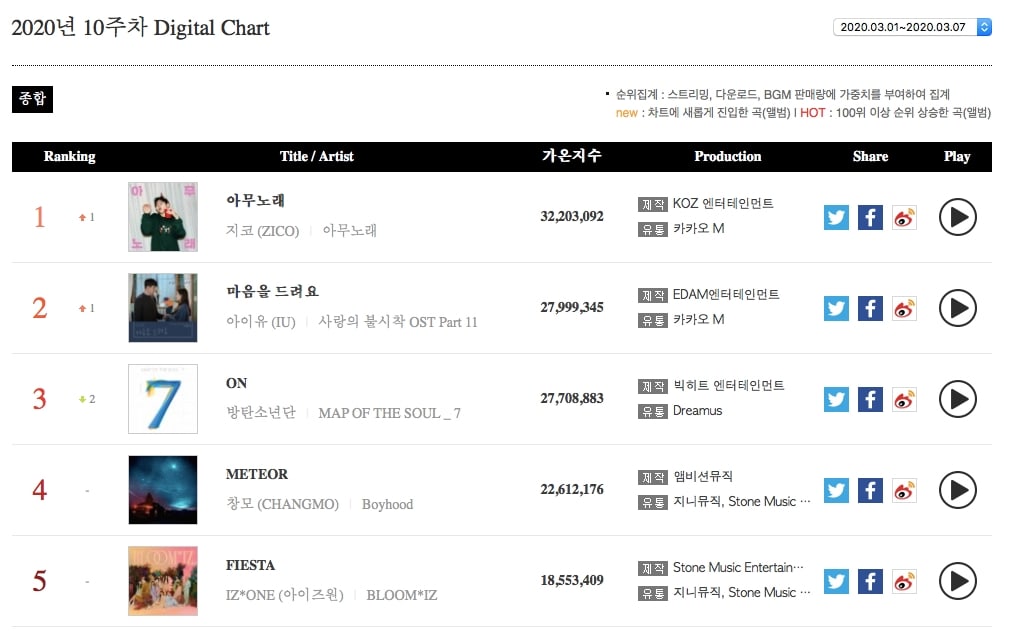 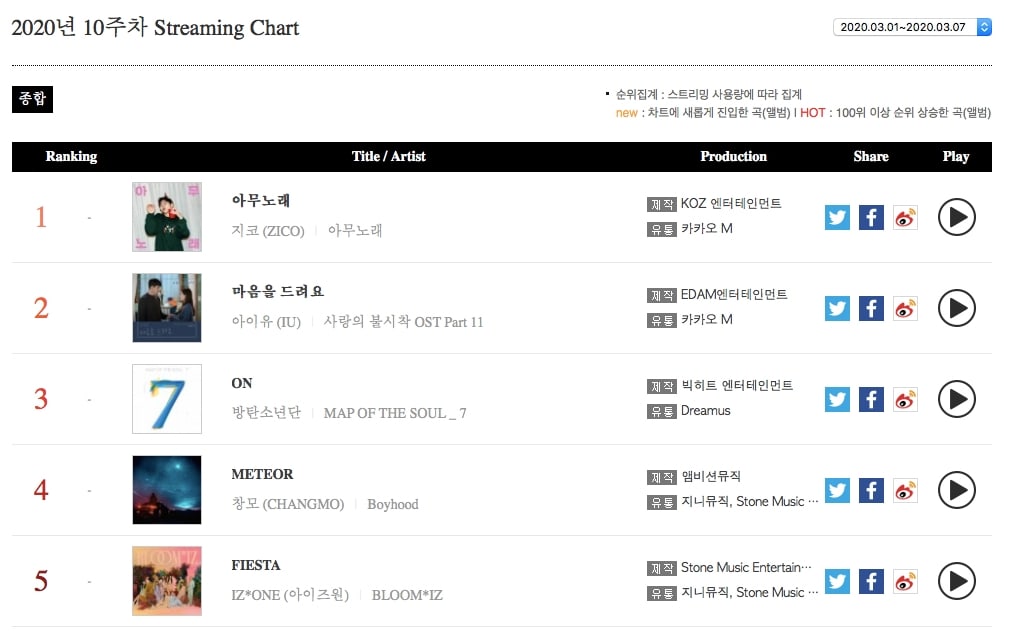 BTS continued their reign over Gaon’s “Social Chart 2.0” this week, while BLACKPINK and IZ*ONE held onto their spots at No. 2 and No. 3 respectively. NCT 127 shot up in the rankings to take No. 4 for the week, while PSY rounded out the top five. 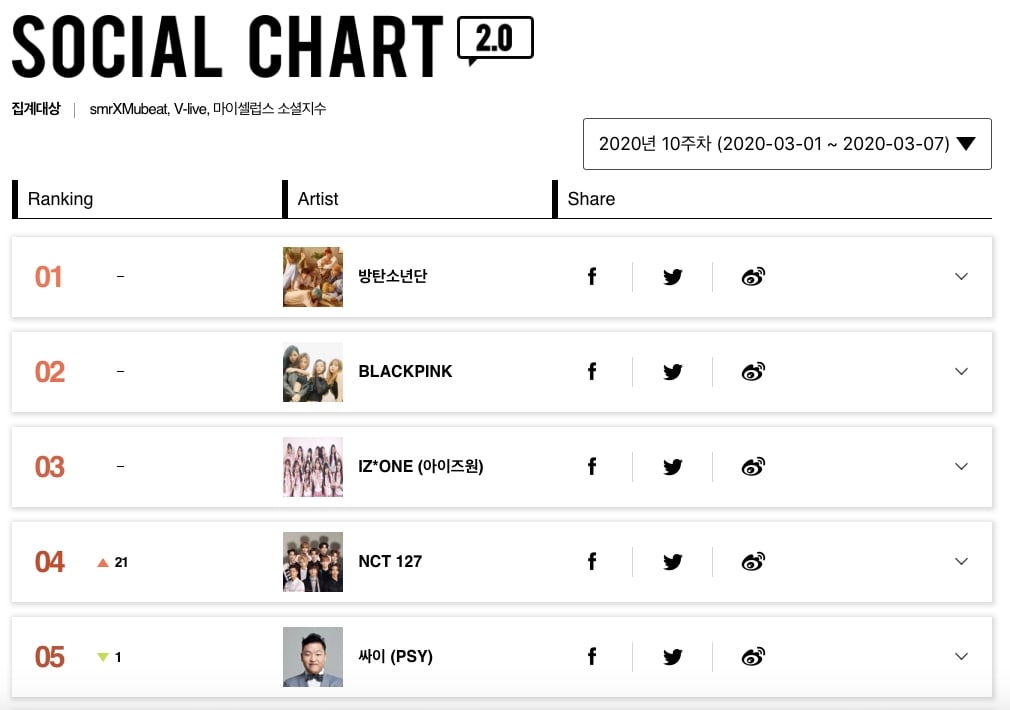