3 Things We Loved & 2 Things We Hated About The Premiere Of “Eccentric! Chef Moon”

Was Shinhwa’s Eric born to play the lead in Channel A’s latest drama “Eccentric! Chef Moon”? I mean, all three of those words are direct descriptions of him. His surname is Mun, he’s a great cook, and he’s extra as heck. But I digress…

In “Eccentric! Chef Moon,” Eric Mun plays Moon Seung Mo, a star chef who travels around the world setting up pop-up restaurants that promote the usage of organic, traditional Korean ingredients. Meanwhile, Bella Yoo (Go Won Hee) is a famous and mysterious fashion designer who also travels around a lot for her fashion shows. After life changing events happen to both of them, they simultaneously find themselves settling down in quaint little place called Seoha village.

As mentioned before, one appealing point for the drama was how pretty everything was going to be. And they definitely delivered. The first episode has all kinds of pretty — from the gorgeous scenery in Australia, to the mouth-watering shots of food prep, to the beautiful fashion pieces — everything is so very aesthetically pleasing.

Oh yes, and the actors aren’t bad to look at either. *wink*

Hated: All the crazy

There’s a whole storyline involving Dong Han International, a conglomerate that deals with… food? I’m not 100 percent following, because it just feels so been-there-done-that and there was suddenly so much information that it’s easy to lose track. What is for sure is that there is a lot of drama. There’s drama in Im Chul Yong (Ahn Nae Sang) and Han Mi Young’s marriage, and both their children (from their respective previous marriages) crave for some form of recognition. Im Chul Young’s daughter, Im Hyun Ah (Cha Jung Won) is hungry for her fashion designs to be recognized, and Han Mi Young’s son Kang Jun Su (Jang Jae Ho) wants control over his grandfather’s conglomerate. (Or maybe he doesn’t actually have sinister intentions, but again, not completely following).

Hyun Ah for sure is all kinds of crazy — she breaks a display case and steals a dress designed by Bella, then dismembers it and plasters it on her wall. If that doesn’t spell crazy then what does? Oh, maybe this does: she freaks out when Bella confronts her and accidentally drives her car off the road, ultimately causing Bella to go missing. 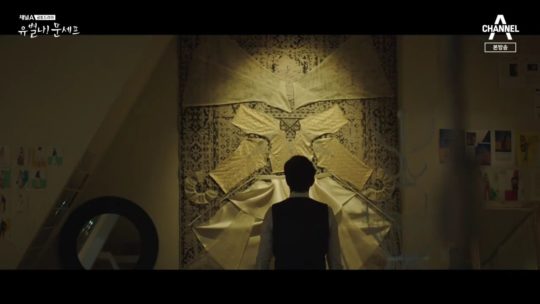 And while Hyun Ah is (maybe) just not right in the head, her father is downright sinister. Since Bella usually keeps her identity hidden from the general public, he wants Hyun Ah to adopt her identity. Groan.

The nutty apple doesn’t fall far from the nutty tree.

Hated: The treatment of anorexia

It is brought up very early on that Bella has anorexia and that she should have it treated. But it is such a passing comment that you could assume she is just on an unhealthy diet and that the people around her are over-reacting. But nope. Later on, Bella herself tells the nurse she can’t eat the food brought in by Moon Seung Mo because she has anorexia. Then she’s seemingly lured by the food and… eats it very readily. The way the drama frames anorexia, by suggesting that all it takes is some delicious food for people to get over it, undercuts just how serious this eating disorder really is.

And once Bella is hit with amnesia, she becomes constantly hungry and her anorexia is not brought up again. While this falls in the realm of acceptable (her forgetting her past means that she forgets her pain and naturally the reason behind her anorexia), why even write Bella with anorexia at all if it doesn’t have any actual bearing to the story??

While the first episode has all the pretty, the second episode is the one that really catches my interest. The drama is billed as a rom-com, but there is barely anything comedy in the first episode. In fact, it leans towards the heavy, with mentions of anorexia, childhood traumas, marital affairs, and even deaths by electrical fires. There is also the aforementioned whole Dong Han International plot line that is barely interesting, and a little girl who comes out of nowhere, so really, the first episode just doesn’t feel balanced.

But that all changes in the second episode. Once the drama shifts its focus to Seoha village and brings amnesiac Bella into the fold, everything just clicks. The tone becomes more light-hearted and everything feels brighter and warmer and more in line with the homely image portrayed in the posters.

It is fun to get to know the colorful villagers of Seoha (the villager who gossips about the Australian beggar is the aunty to end all aunties), and amnesiac Bella is a hoot and a half, and really, the drama just feels so much more fun. Above all, what makes the second episode work is the quirky relationship between the four housemates, which brings us to…

…here! The four housemates of Moon Seung Mo, Bang Da Hoon (Choi Kwang Je), Bella, and Seol Ah (Go Do Yeon) are just adorable. That being said, I didn’t feel this way right from the start. Seol Ah’s initial appearance is strange to say the least. She suddenly appears at Seung Mo’s parents’ restaurant alone, and claims that Seung Mo is her dad. And they take her in, just like that, with no attempts to return her to her sender. Whereas Seung Mo’s best friend, Bang Da Hoon, is like the weird uncle with the weird hairstyle that you try to avoid at family reunions.

Who sends a 7-year-old child out into the world by herself? And who just takes in said random child, no questions asked?

However, when the four of them come together in the second episode, this little found family becomes all the more appealing. Eric plays the role of the begrudging, gruff dad really well, and Seol Ah and weird uncle Da Hoon have such adorable chemistry together. These four characters play off each other hilariously, and right now, their scenes together have been the most fun to watch.

So, that being said, moving forward can we have more quirky Seoha village-ness and less vengeful Dong Han International please?

How did you find the premiere episodes of “Eccentric! Chef Moon”? Do you prefer episode two to episode one as well? And how hungry were you after watching all the yummy cooking? Let us know in the comments below!

Belinda_C secretly dislikes Eric’s gelled hair in the first episode. Shhh. It’s a secret, don’t tell anyone. Talk SEVENTEEN and Shinhwa with her on Twitter!