10 Revelations From “Memorist” That Had Us Gasping In Shock

We’re nearing the finish line of the intense, twisty ride that is “Memorist” and I, for one, am absolutely shuddering in excitement! So far, murders have led to murderers, and murderers have led to even more murderers, and it’s just all a murderous game of cat and mouse amidst a puzzle that just keeps growing bigger and bigger. There have been plenty of red herrings so far, but our trusty superpowered Dong Baek (Yoo Seung Ho) and our genius profiler Han Sun Mi (Lee Se Young) are gradually chipping away at larger mystery while also shouldering the pain of solving their respective parents’ murders.

It’s been an amazing ride so far, with chilling and gasp-worthy events happening left and right. So to get us ready for what will undeniably be an intense final few episodes, here’s a rundown of some of the more thrilling revelations so far:

Warning: Spoilers! Spoilers everywhere! Like, seriously, major spoilers from episodes 1 to 12 ahead! You’ve been warned.

The latter half of episode two is all kinds of horrifying, as we get a glimpse of what happens to the kidnapped girls. And when Ye Rim sees a chance to escape, she jumps on it, inching through crawl spaces as we literally feel the tension intensify. She safely makes it out of the crawl space and out into the open, but just as she breathes a sigh of relief, a shadow walks up upon her and we see a person holding a hammer. What cruelty, to see the hammer-wielding arm contrasted against the beautiful golden horizon; a horizon that was brimming with hope just a mere second ago.

When Dong Baek goes on a tirade

We later learn that the true mastermind behind all the kidnappings is a prominent and powerful cult leader called Park Ki Dan (Lee Seung Chul). And like a true cult leader, Park Ki Dan is so charismatic and convincing, it’s chilling to see how much control he has over his followers. He convinces those around him that Dong Baek’s superpowers come from the devil, and he skirts around the law with the help of his high-powered followers. Evidence is destroyed before they are analyzed, but just as it appears that the good guys are up against a wall, Dong Baek uses his live televised hearing to his advantage. (The hearing is in regards to the legality of his memory scans).

Dong Baek drops a truth bomb tirade about Park Ki Dan and forces all his heinous acts into the open. This stunt, though putting Dong Baek in jeopardy, successfully ignites a wave of public outcry and Sun Mi is finally able to get a warrant to go after Park Ki Dan. The whole sequence is thrilling to watch, and you can feel your heart racing, knowing that the good guys are finally able to get some traction against the heinous Park Ki Dan.

When the murderer is murdered

Unfortunately, before the good guys are able to bring justice to Park Ki Dan, someone else brings him to justice, in a much more violent way. Essentially, Park Ki Dan is bludgeoned to death with a hammer. And when Dong Baek is brought in to scan the witnesses’ memories (they had trouble remembering details), he finds out that none of them had any memories related to the murder. “It’s as if someone deleted that scene from their memories,” muses Dong Baek. And it is right then, we knew this mystery was way bigger than what we had seen so far and I was itching to see more!

When we learn of a man named Jin Jae Kyu

Eventually, we find out that the killer who kills Park Ki Dan is going around executing others too, specifically people who had caused harm to others. At the scene of each murder, the killer leaves a little clue as to who the next victim would be, and thus starts a very bloody game of cat and mouse. While there are a few bumps along the road, the investigative team finally lands on their number one suspect — Jin Jae Kyu, a cameraman who ticks all their suspect boxes.

As Jin Jae Kyu’s story gradually unfolds, you have to admit he is one memorable foe. He claims that he can hear the words from god and thus is able to know about future murders. The way he convulses and shudders each time he “hears” something is creepy as heck, and you can’t help but wonder whether he can really hear stuff or if he’s just that (psychotically) good. More so, his backstory is pretty gasp-worthy too, what with being sent to a mental institution at a young age, and later having a wife who’s trying to kill him for his inheritance (and even tries to kill her own daughter).

Jin Jae Kyu bugs his wife’s beeper and learns not only about her affair, but also about her murderous intentions.

It’s all pretty intense, and every bit about the Jin Jae Kyu arc is a wild roller coaster ride. Also, major props to actor Jo Han Chul for doing such a tremendously chilling job.

The idea of there being another superpowered human is brought up very early on, right around the time of Park Ki Dan’s murder and the witnesses having gaps in their memories. But as new evidence comes up, the good guys attribute these “supernatural” abilities to just science or tricks played by the killers. So when we actually witness a different set of superpowers on display (we even see the wispy CGI effects that go along with it), I was floored!

The other superpowered human can erase memories. Though… why is he also able to stop these two in their tracks? Hmmm

Undoubtedly, this again amps up the stakes as there’s now a superpowered human on each side. And more worryingly, Dong Baek’s powers are seemingly weaker than the other side’s.

When we gradually see the Shinbae incident unfold

After some detective work, the investigative team eventually figures out that Jin Jae Kyu — who while is The Executioner and is responsible for the murders from 20 years ago (and also for Sun Mi’s father) — isn’t responsible for the recent slew of deaths starting from Park Ki Dan. Instead, he’s become a scapegoat for another maniac, dubbed The Eraser. This leads our detectives to discover a horrific incident from 20 years ago, where seven college kids violently attacked and beat each other to death. This incident which happened in Shinbae (thusly called “The Shinbae incident”) is thought to be the first ever sighting of The Eraser and is seemingly the catalyst for all these recent events.

When we figure out where The Eraser is all along 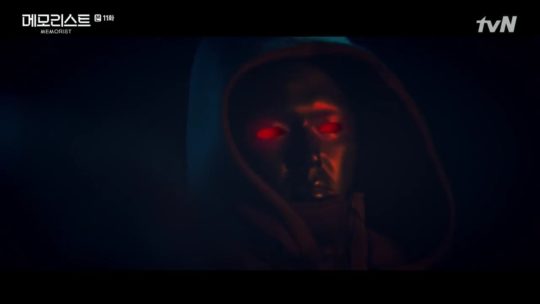 I need an eraser to erase this image out of my head. *cough*

Sick and tired of playing defense, the good guys draw an elaborate plan to try and lure The Eraser out so they can take him down. They know he wants Jin Jae Kyu dead, so they use him as bait; but in reality, they had moved him out of the hospital and to a secure site with SWAT guarding him.

The Eraser even pre-programs a hack to take down all communication lines and forces a literal blackout, but even then, our detectives manage to go through with their plans. And as we see someone walking down the corridors and into Jin Jae Kyu’s supposed hospital room, we hold our breaths knowing that it couldn’t possibly be that easy. And we are right. The person is a decoy all along, and The Eraser is nowhere near their building. Instead, he is with his intended target all the while. The Eraser is the SWAT member tasked with guarding Jin Jae Kyu. *Insert gasps*

By episode 11, the detectives are fully immersed in uncovering the mystery surrounding the Shinbae incident. And on the heels of yet a another murder by (I’m assuming) The Eraser, we cut to a scene where a random guy is harassing a passing woman when in swoops a man wearing a black hoodie who proceeds to viciously attack the pervert.

He returns home, takes off his hoodie, and the camera pans up to reveal his face to be… Deputy Chief Lee (Jo Sung Ha)! Personally, I doubt he’s actually The Eraser, given that it’s only just episode 11 and that’s too early for the drama to reveal their trump card. But, he does have a dark streak in him, and from what we’ve seen previously, he is hiding something. He’s definitely not as on the up and up as he wants to appear to be.

When we figure out what the “prairie” means

During recent episodes, we dig a little bit more into Dong Baek’s backstory. More specifically, his burgeoning relationship with a girl who stops him from committing suicide, and who then encourages him to get accustomed to his superpowers.

Dong Baek is obviously smitten with this girl, but one night (seven years ago), she abruptly goes missing. As Dong Baek anxiously texts and calls her, we see her name as saved on his phone — “초원” (which literally translates to grasslands or prairie).

Suddenly (at least to the viewers), Jin Jae Kyu’s dying message to Sun Mi makes all the more sense: “The Eraser is hidden in Dong Baek’s past.”

“You must find it. Don’t forget. The prairie.”

Dong Baek and Sun Mi know that The Eraser has a scar on his arm, and while tracking suspects down, they are tipped off that Deputy Chief Lee has such a scar. Puzzle pieces slowly fall into place and he quickly becomes their number one suspect. They barge into his office and the two of them have a superpowered face off (at least that’s what it appears to be. You can’t always take things at face value with this twisty show).

Dong Baek manages to scan Deputy Chief Lee’s memories and he sees what (allegedly) really happened at the Shinbae incident 20 years ago. While it’s true that Deputy Chief Lee is at the scene, he is also bound and gagged. When he takes off his blindfold, the college kids are already busy attacking each other.

After getting caught in the crossfire and losing consciousness for a second, he comes to and sees a child standing next to him. And the child — the child who (supposedly) killed those college kids and later becomes The Eraser — is none other than… Dong Baek! *dum dum duuuuuum*

So, how much have you been enjoying “Memorist” so far? Are you keeping up with the twisty turns? And are you as fond of these two below as I am? Leave your comments below, and give us your best endgame theory! 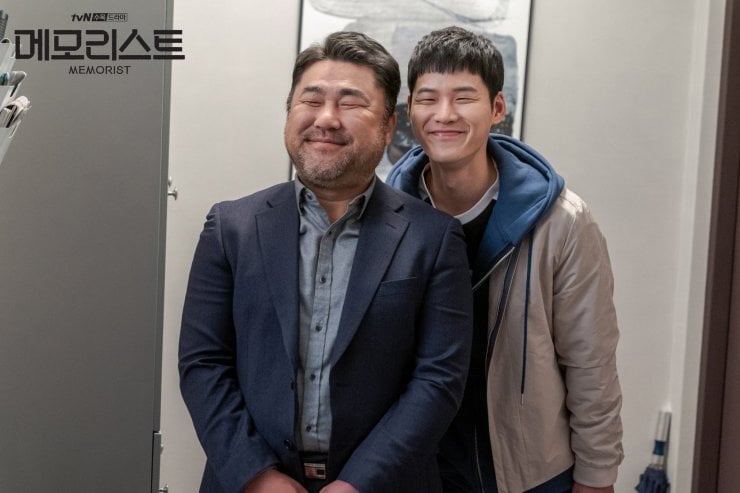 Most adorable sidekicks of the year!

Catch the latest episode of “Memorist”:

Belinda_C has a super wild theory: What if, The Eraser is Dong Baek’s mother? It would make sense that the superpowers are hereditary, and the voice we heard before he/she jumped off the building sounded feminine. Also, we don’t have solid evidence that she’s actually dead, and she’s someone from his past! Right? Anyone? Talk SEVENTEEN and Shinhwa with her on Twitter!