2AM’s Jo Kwon has responded to misleading articles and criticism about his military service through Instagram and expressed love to his fellow soldiers who rose to his defense.

An article referring to Jo Kwon’s appearance on the May 4 episode of KBS 2TV’s “Problem Child in the House” reported that Jo Kwon had felt as if referring to a military senior nine years younger than him with honorifics had given him a serious reality check and that he sought out the general afterwards.

His fellow soldiers defended Jo Kwon on Instagram, with one soldier writing, “Jo Kwon did not specifically seek out the general. We have meeting times once every week. Jo Kwon was a good soldier and is someone that I respect outside of the military. Please don’t misunderstand.”

Jo Kwon posted his fellow soldiers’ statements to his Instagram story and responded to the criticism himself.

Since I have been receiving so much attention, it finally feels like I have been discharged from the military.

Regardless of whether I enlisted early or late, I have healthily, confidently, and safely completed my service. I have made unforgettable memories with the management of the military band and my fellow senior and junior soldiers. It’s not about who has a harder time and has to work more but about doing the best as a soldier for the Republic of Korea to fulfill our duty of defending our country. Whether it’s the military band, the infantry, the drivers, the mess personnel, the front line, the home front, or a soldier in a musical as a celebrity, I can say as someone who has been to the military that there is no soldier who slacks off and doesn’t work hard for their country. As someone who has been through it all, I see the accusations that I’ve slacked off as simply sickening. Having enlisted during the heat, I’ve received many questions about whether I have actually trained since my skin hasn’t been tanned. Compared to others, my skin is paler and tends to burn rather than tan. That being said, the army is where many different people of Korea gather and solidify a sense of comradeship.

I think there was room for misinterpretation through the broadcast, but I think I have done well during my military life. I can’t help but post [on Instagram] after being touched by all the posts from my fellow soldiers.

I’m used to being judged based on what people can see on the outside so it’s okay. I’m just very thankful for everyone who has spent my military life with me. 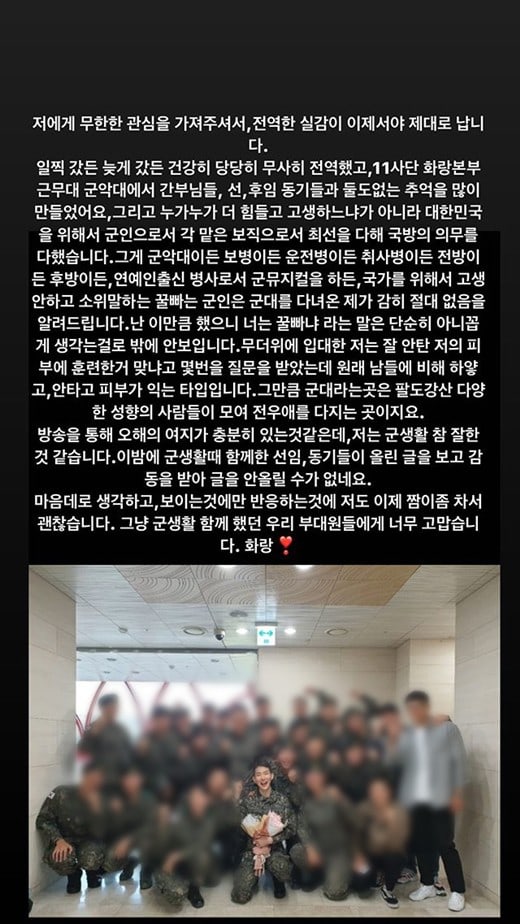 Jo Kwon was discharged from the military on March 24 and has been cast in the Korean version of the musical “Everybody’s Talking About Jamie.”