IU and BTS’ Suga’s hit collaboration “eight” achieved a triple crown on the monthly charts after sweeping all three digital charts: the song took No. 1 on the overall digital chart, the download chart, and the streaming chart for May.

Meanwhile, TWICE earned a double crown on the weekly charts, topping both this week’s album chart and digital download chart with their new mini album “MORE & MORE” and its title track of the same name respectively.

EXO’s Baekhyun’s new solo mini album “Delight,” which previously debuted at No. 1 on Gaon’s weekly chart, topped the physical album chart for May. NCT 127’s repackaged album “Neo Zone: The Final Round” entered the monthly chart at No. 2, while NCT Dream’s “Reload,” which earned a double platinum certification this month, stayed strong at No. 3. TXT’s “The Dream Chapter: Eternity” debuted at No. 4 on the chart, followed by NU’EST’s “The Nocturne” at No. 5. 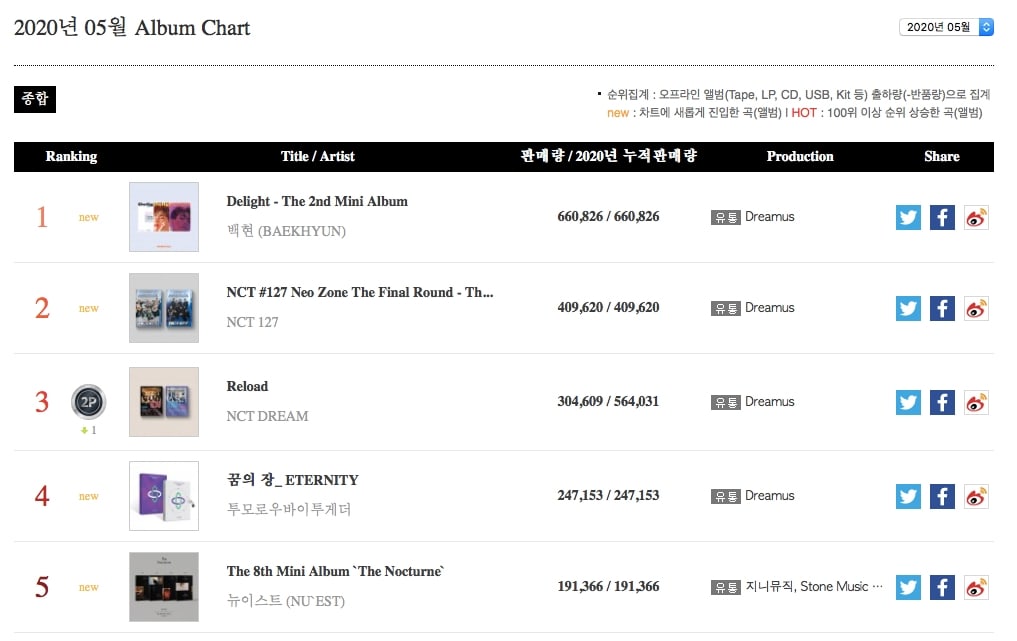 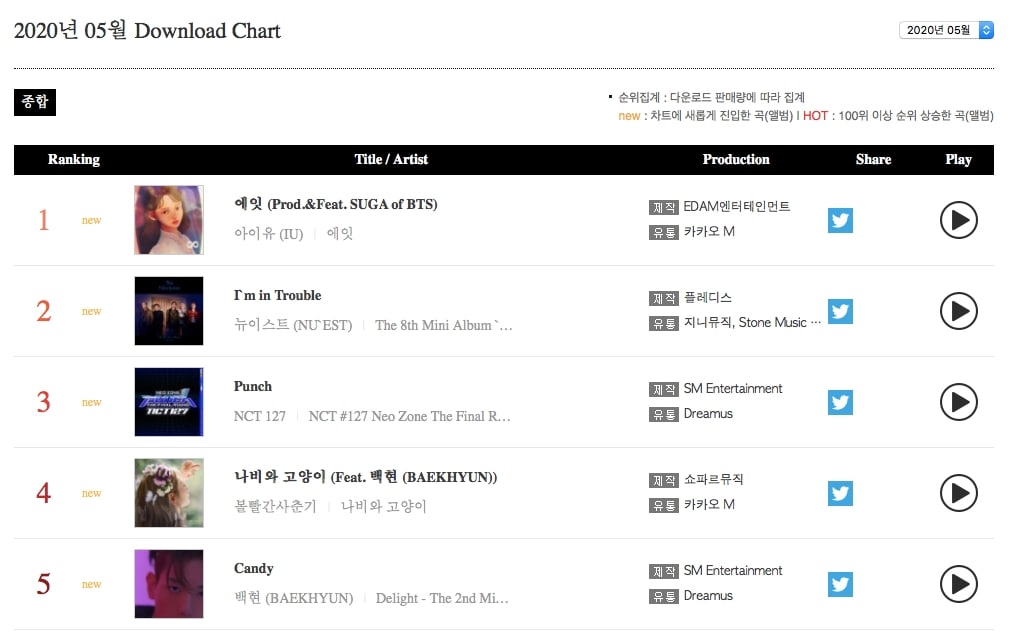 The top five songs on the overall digital chart and the streaming chart were exactly the same for May: IU’s “eight” (produced by and featuring Suga) topped both charts, followed by Jo Jung Suk’s “Aloha” (from the OST of his tvN drama “Hospital Playlist”) at No. 2, Oh My Girl’s “Nonstop” at No. 3, BOL4’s “Leo” (featuring Baekhyun) at No. 4, and Gaho’s “Start” (from the OST of JTBC’s “Itaewon Class”) at No. 5. 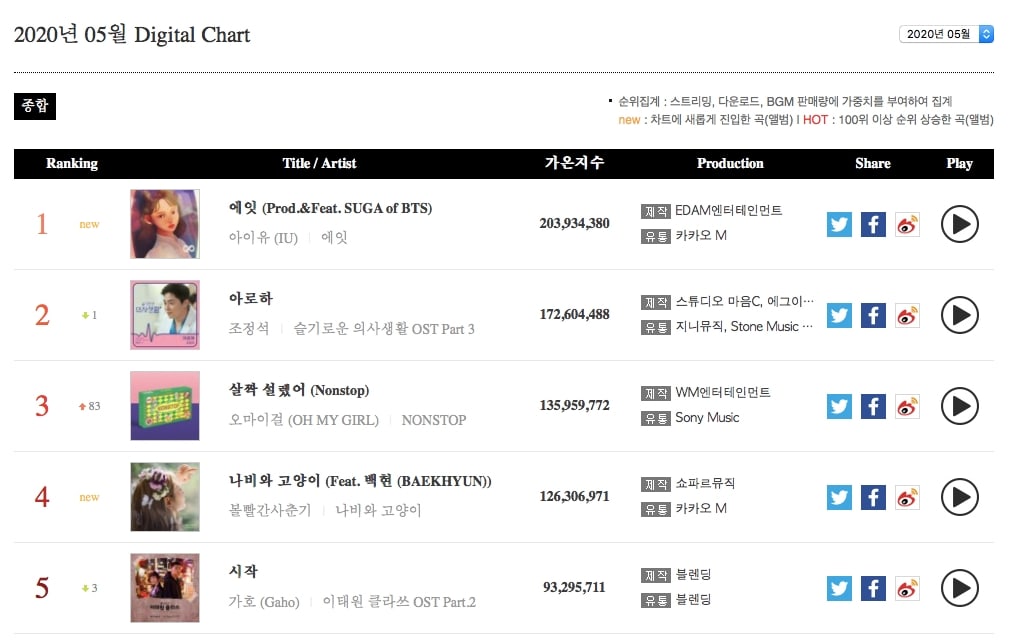 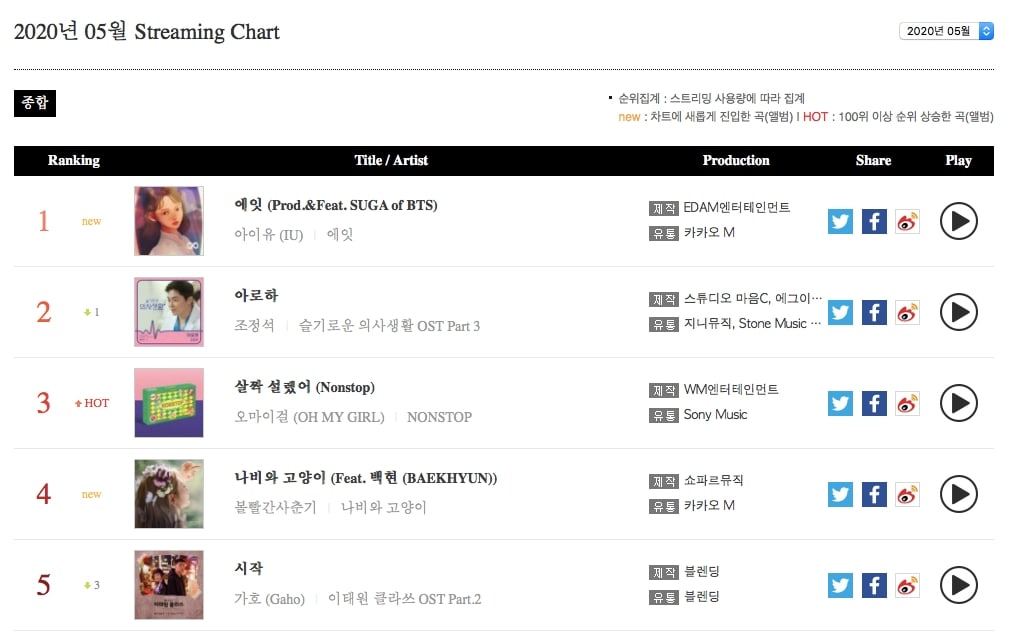 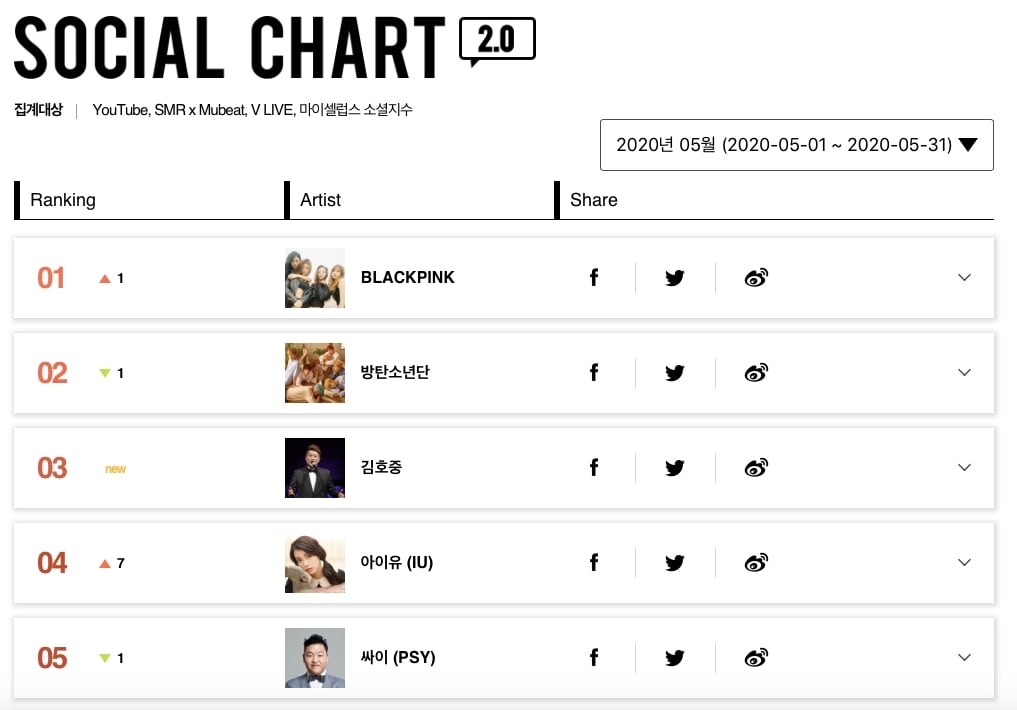 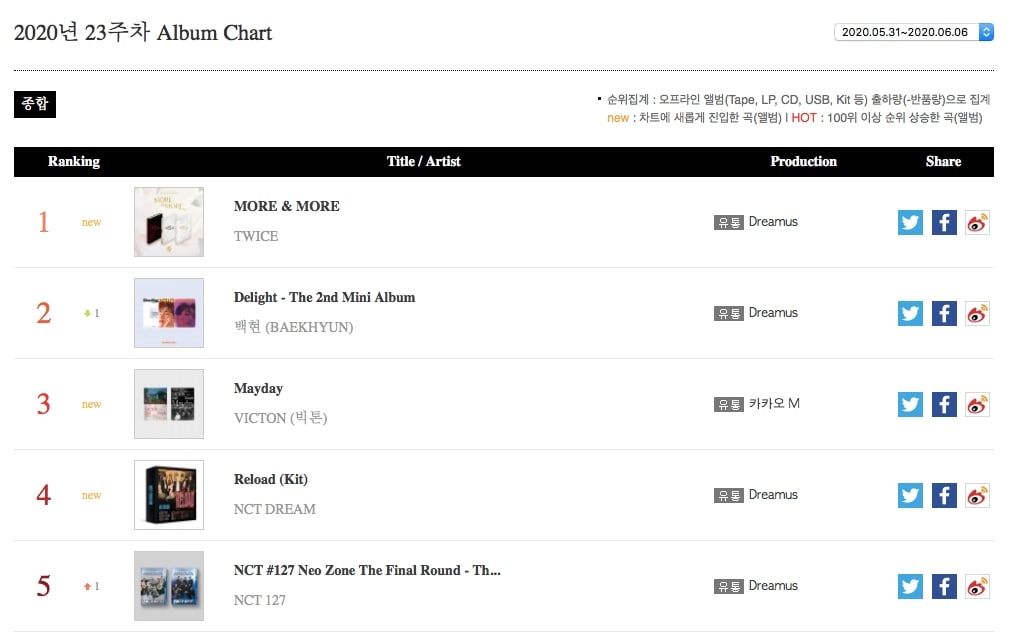 TWICE’s new title track “MORE & MORE” entered the digital download chart at No. 1 this week, while Jeon Mi Do’s “I Knew I Love” (from the OST of “Hospital Playlist”) held onto its spot at No. 2. Baekhyun’s “Candy” charted at No. 3 for the week, trailed by Mido and Falasol’s “Me to You, You to Me” (also from the “Hospital Playlist” OST) at No. 4 and VICTON’s new title track “Mayday” at No. 5. 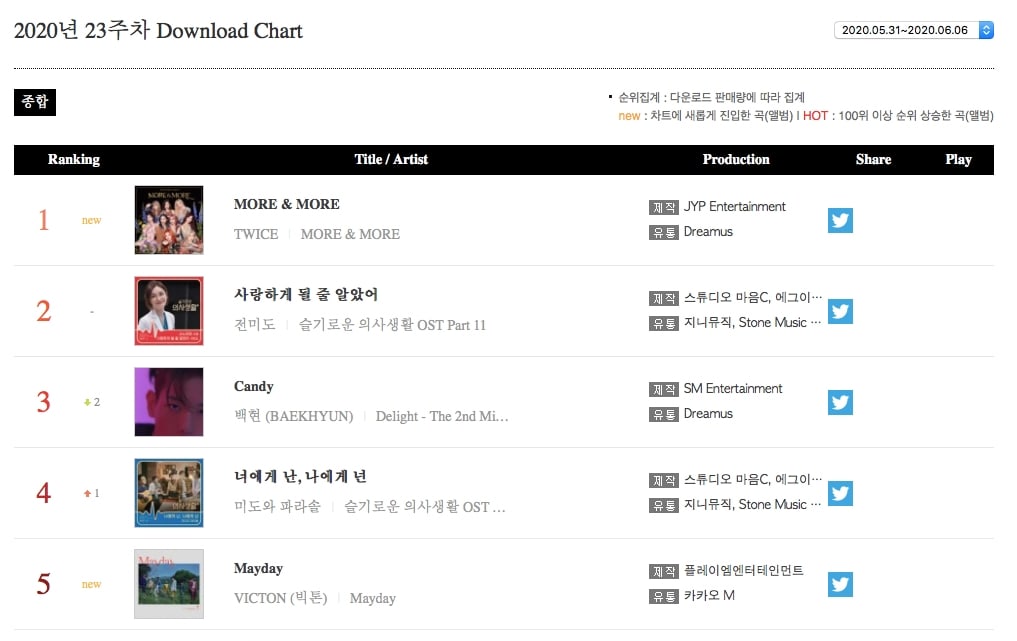 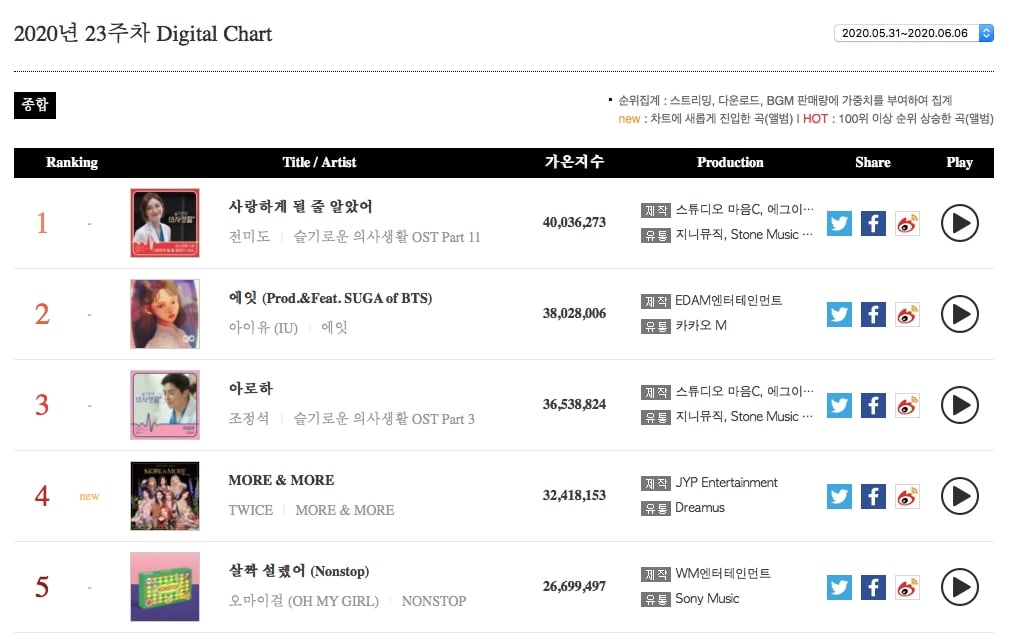 The top three songs on this week’s streaming chart were exactly the same as the top three on the overall digital chart: Jeon Mi Do’s “I Knew I Love” charted at No. 1, IU’s “eight” at No. 2, and Jo Jung Suk’s “Aloha” at No. 3. Oh My Girl’s “Nonstop” maintained its position at No. 4 this week, while TWICE’s “MORE & MORE” debuted on the chart at No. 5. 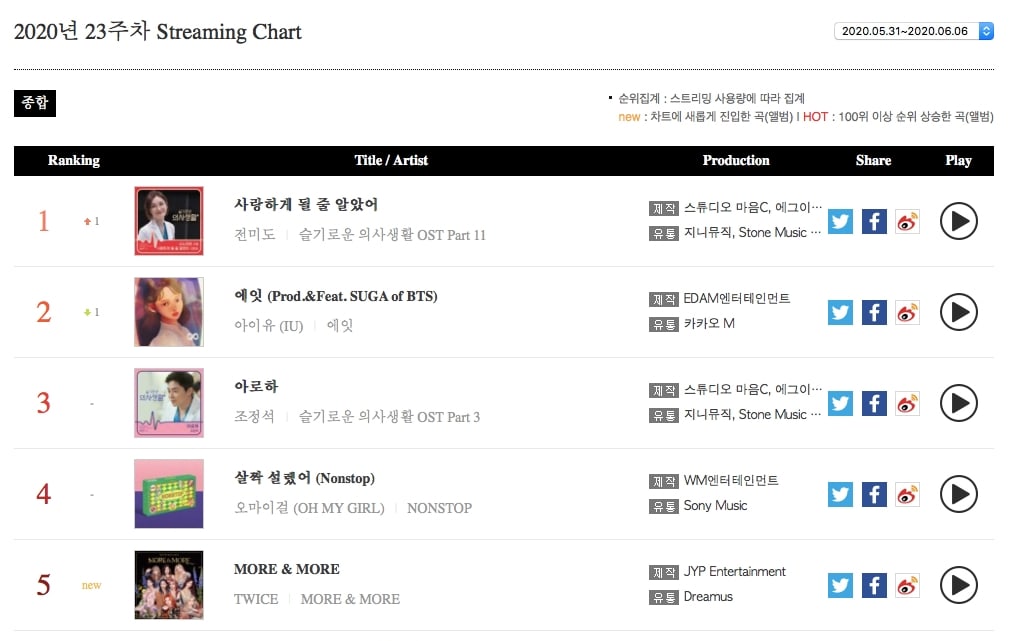 In addition to topping the monthly social chart, BLACKPINK also remained No. 1 on this week’s “Social Chart 2.0.” BTS held onto their spot at No. 2, followed by Im Young Woong at No. 3, PSY at No. 4, and Lee Chan Won at No. 5. 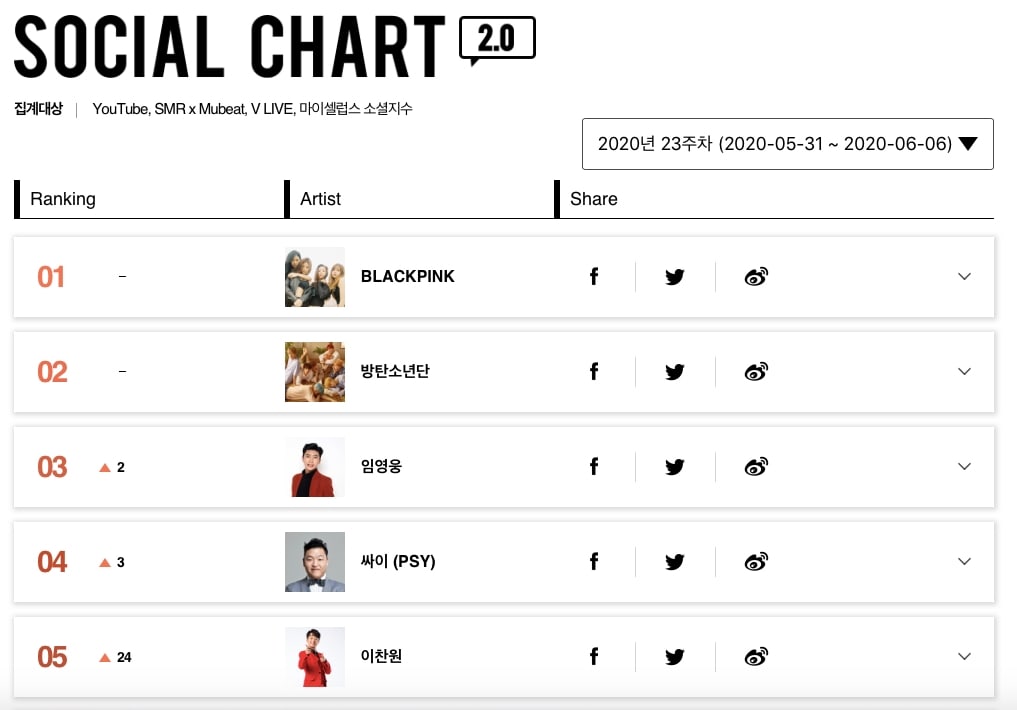