Gaon Chart revealed its chart rankings for the week of June 7 to June 13!

Super Junior-K.R.Y topped this week’s physical album chart with their first mini album “When We Were Us.” WJSN ranked No. 2 with their new album “Neverland,” Ha Sung Woon followed with his new release “Twilight Zone,” and N.Flying also entered the chart with their album “So, 通.” Baekhyun’s second mini album “Delight” continued to stay strong on the charts at No. 5. 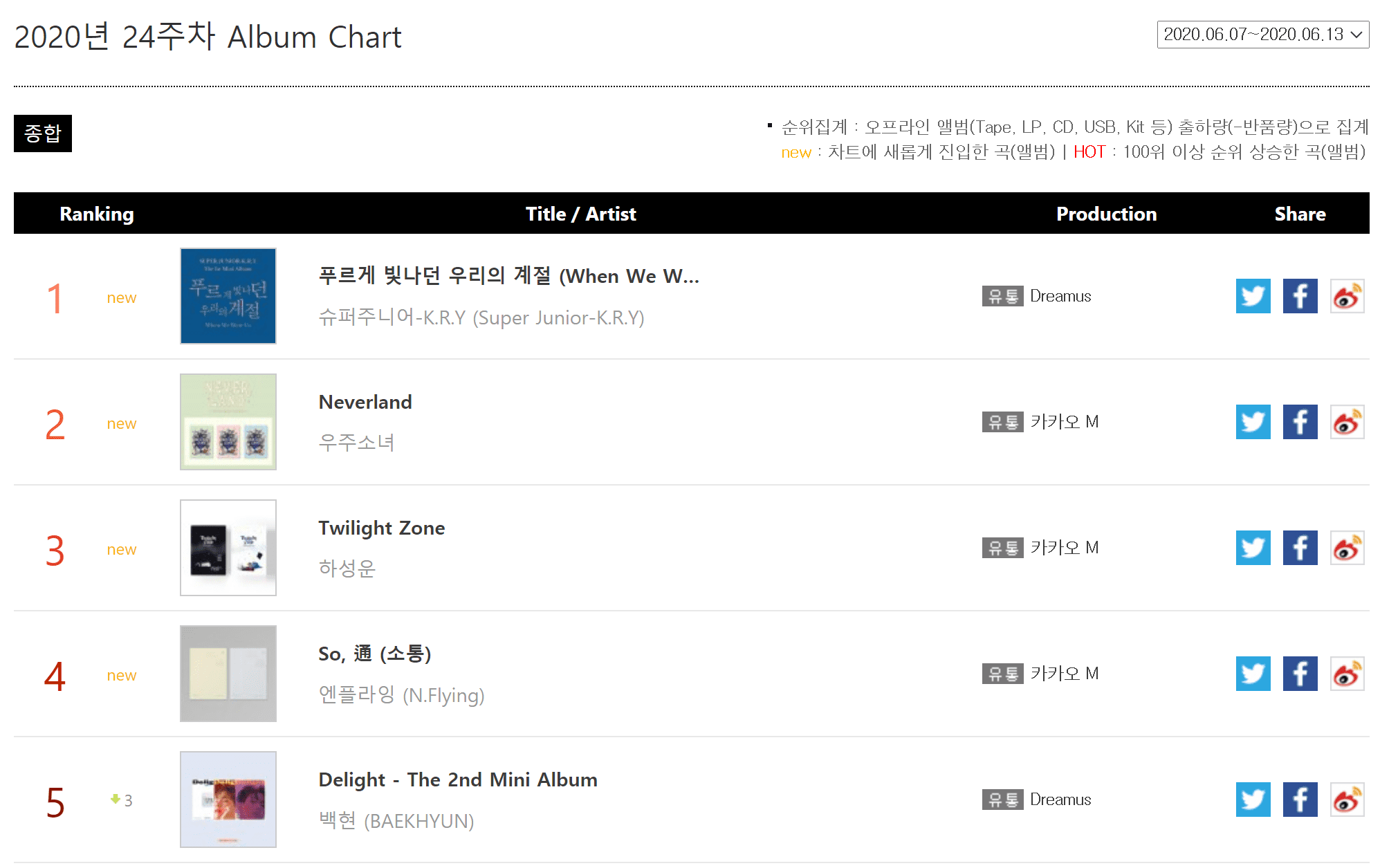 Ha Sung Woon’s new solo track “Get Ready” topped the download charts, followed by Im Young Woong’s “Trust in Me” (from TV Chosun’s hit audition program “Mister Trot”) at No. 2. TWICE’s “MORE & MORE” ranked No. 3, and Super Junior-K.R.Y’s “When We Were Us” entered the chart at No. 4. H1GHR MUSIC artists Jay Park, HAON, pH-1, and Sik-K’s remix of Rain’s “Gang” ranked No. 5. 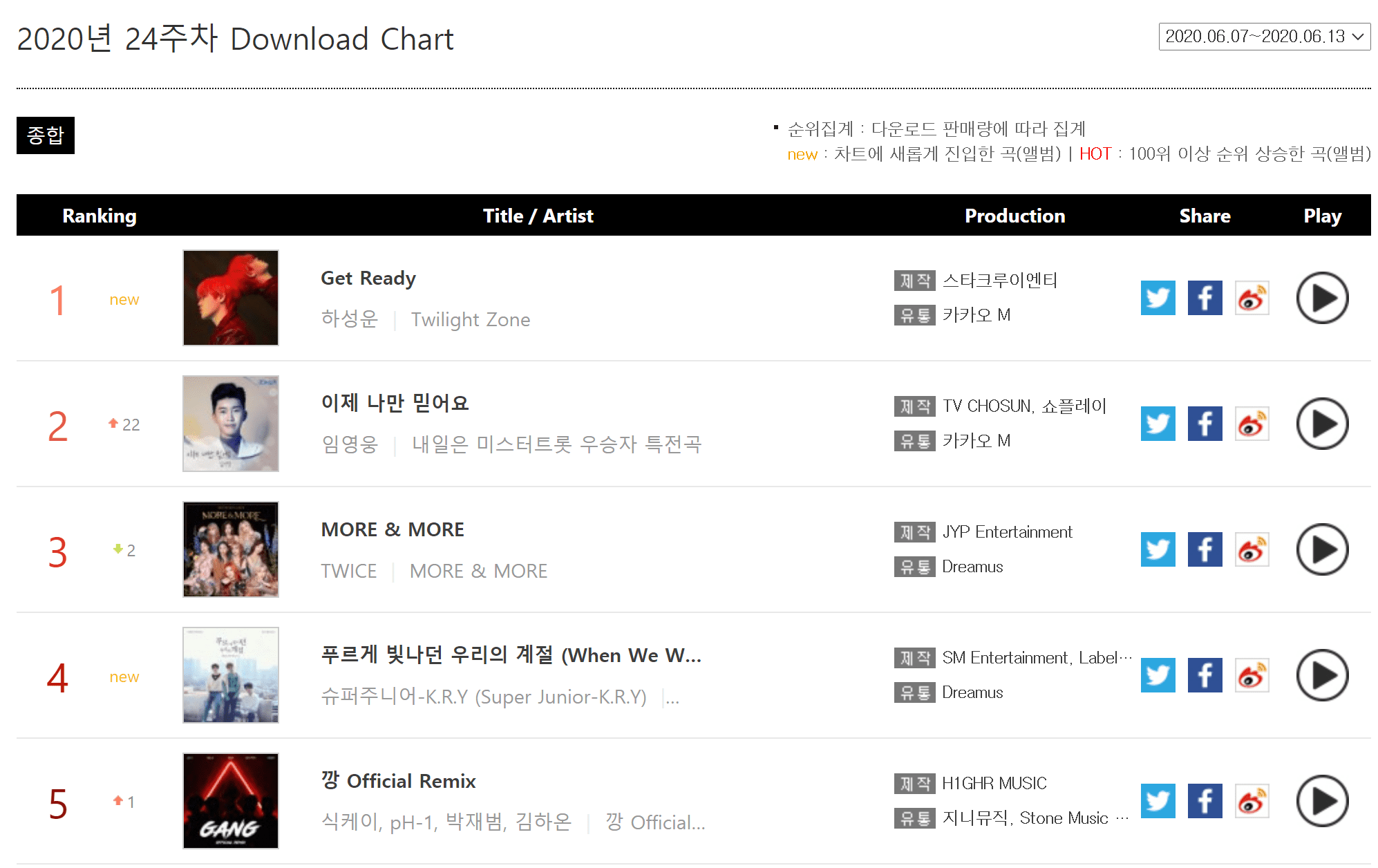 IU’s “eight” (featuring and produced by Suga) took the No. 1 spot on the digital chart once more, and two OSTs from tvN’s “Hospital Playlist” followed with Jo Jung Suk’s “Aloha” and Jeon Mi Do’s “I Knew I Love.” H1GHR MUSIC artists Jay Park, HAON, pH-1, and Sik-K’s remix of “Gang” rose to No. 4 on the digital chart, and TWICE’s “MORE & MORE” ranked No. 5. 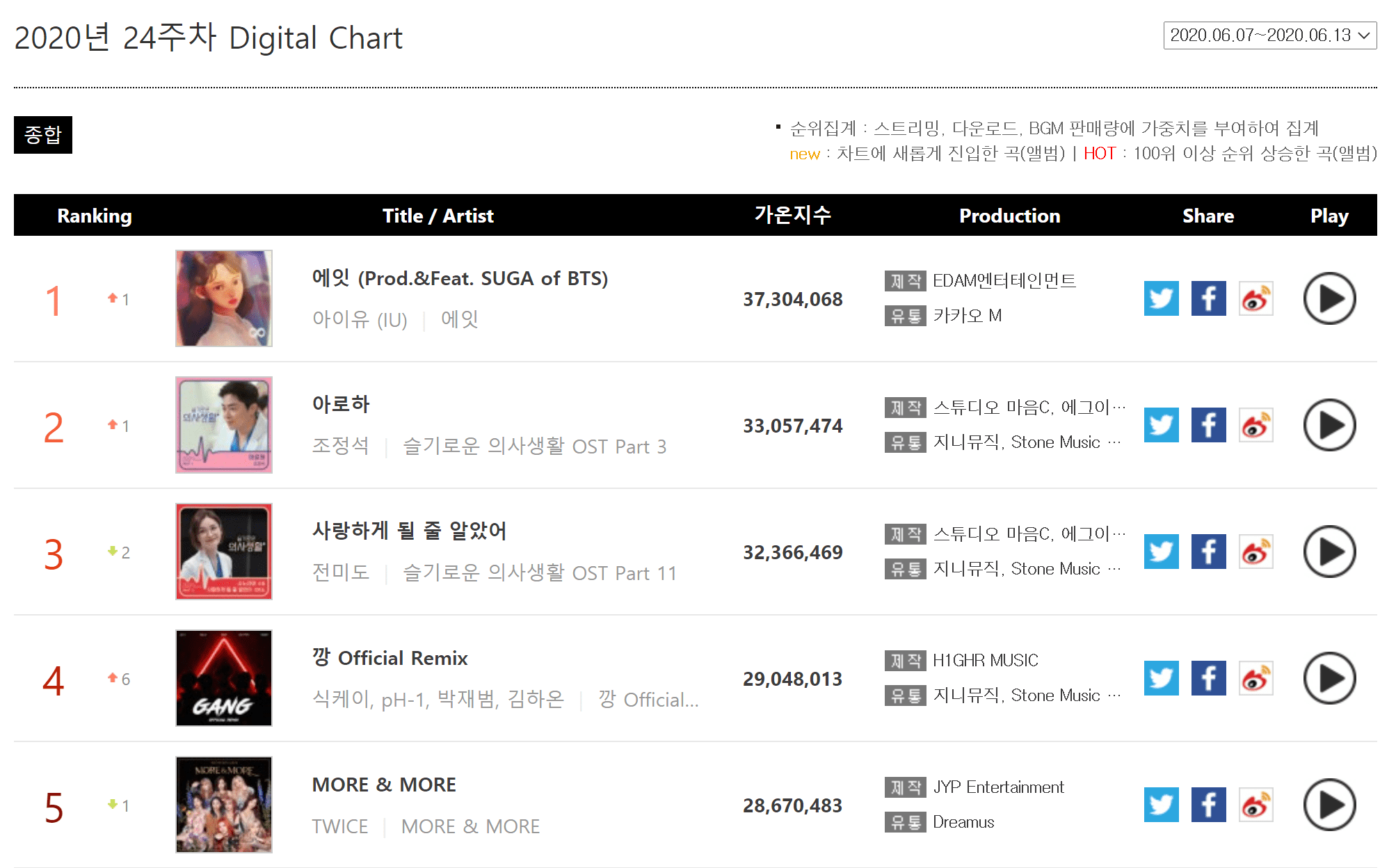 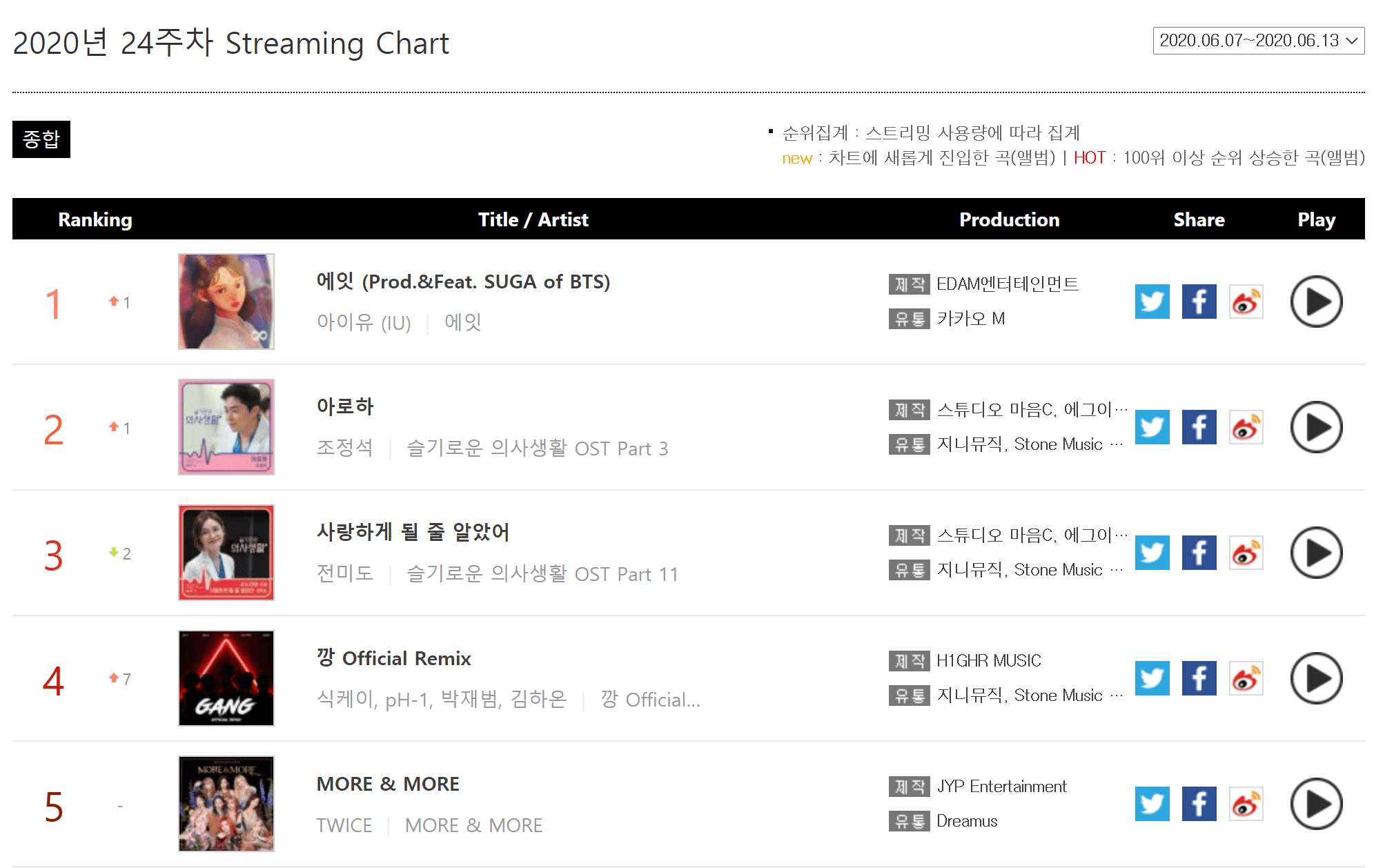 BLACKPINK, who is currently gearing up for their long-awaited comeback, remained No. 1 on the social chart for the third consecutive week. BTS followed at No. 2, while Yang Joon Il rose to the No. 3 spot. Trot singer Im Young Woong placed No. 4, and TWICE took the No. 5 spot. 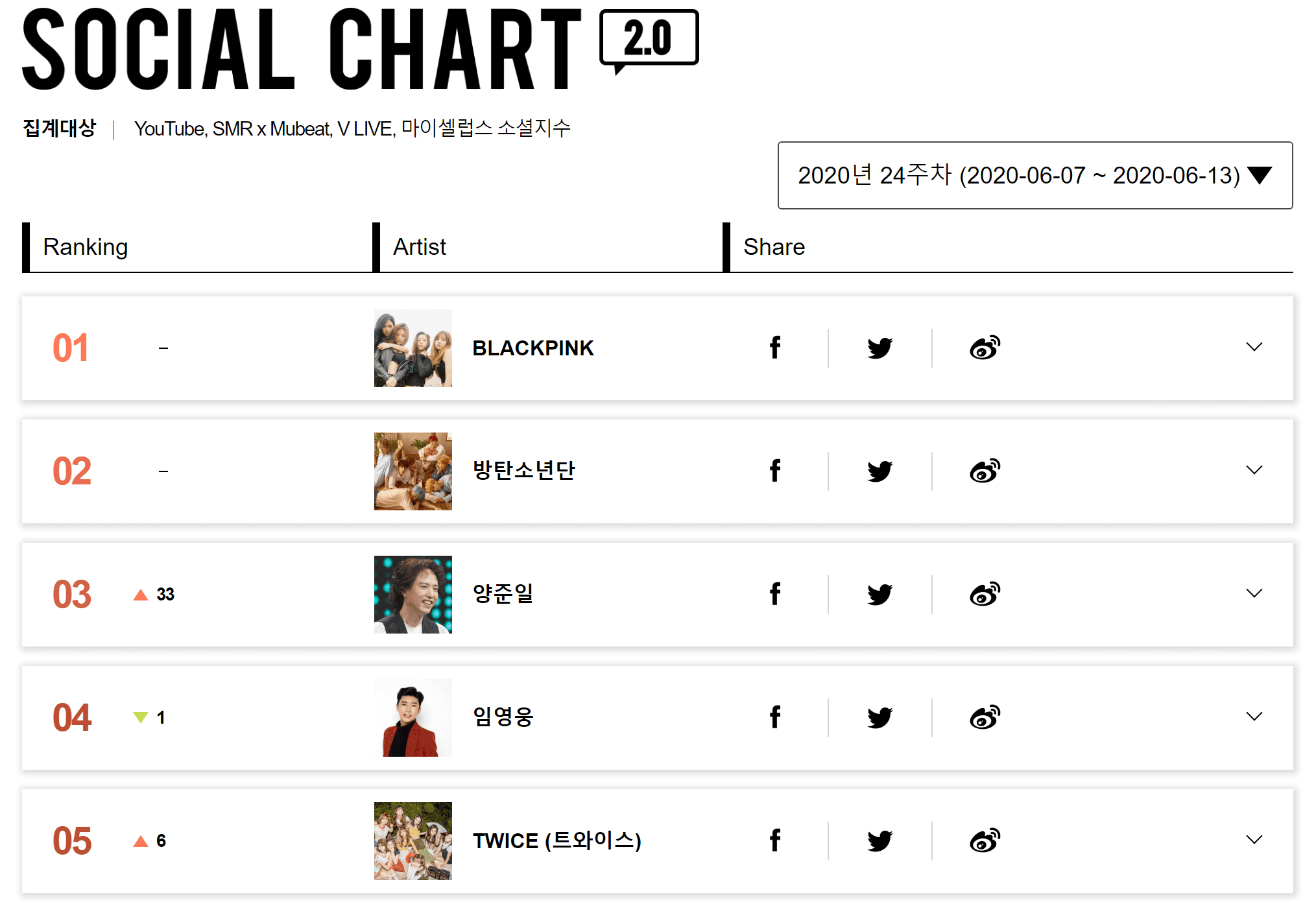