HaHa got a huge surprise when he was live on Instagram!

On June 18, HaHa was holding a broadcast on Instagram before he did a live home shopping show, and he showed off some of the food and more on set. Suddenly, American actor Jack Black appeared in the comments, writing “Quan!!!!” and “Hi” (HaHa’s instagram name is “quanhaha79”).

Once HaHa noticed Jack Black in his comments, he said in shock, “It’s Jack Black. Oh my god.” Jack Black then appeared in the video with a big laugh, and the pair had a split-screen video call over the live stream.

HaHa excitedly said in English to Jack Black, “Take care, take care!” while referring to him as “hyung,” a Korean term used by men toward older brothers or male friends. Jack Black gave him a thumbs up and said, “You’re looking good.” Haha said in Korean, “This is amazing, hyung.” 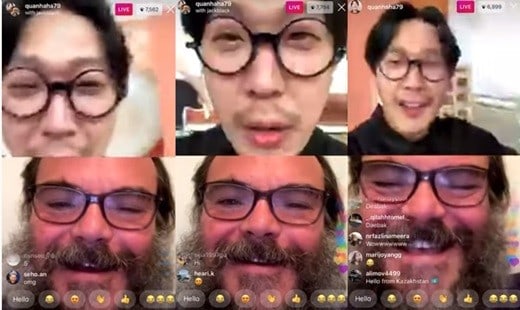 Jack Black then said, “I’m hungry!” HaHa replied that he was too with a laugh, and Jack Black said, “I’m going to fly over there and have lunch with you.” With a big smile, Jack Black ended the call by saying, “I love you, bye!” and HaHa happily said, “Take care, hyung“!

Afterward, Haha uploaded an edited video of the surprising call. He wrote in the caption, “So crazy… He called me Quan HaHa… [crying symbols] It wasn’t that I couldn’t understand him!! I couldn’t hear well… Anyway, I love you!! Stay healthy, and let’s definitely meet again!!”

HaHa and Jack Black first met back in 2016 when the actor guested on MBC’s “Infinite Challenge,” and he reunited with the cast when they were in Los Angeles in 2017.

Jack Black
HaHa
How does this article make you feel?