Kim Woo Bin Talks About Starting Next Chapter Of Life With A New Mindset, Returning After Hiatus With 1st Film In 4 Years, And More

Kim Woo Bin graces the cover of Esquire Korea’s July issue, and he sat down with the magazine for an insightful interview about his career, his new mindset, and more.

On the topic of how it felt to be doing his first interview in five years, Kim Woo Bin said, “You saying it’s been five years makes me realize that it’s been a really long time. But to be honest, it doesn’t feel like it’s been that long. I thought it would all feel unfamiliar, but now that I’m meeting you, I still feel a sense of familiarity. It was the same way with filming my movie. I was very nervous since it had been such a long time, but once I actually got to set, I thought to myself, ‘This doesn’t feel as unfamiliar as I’d expected.'” 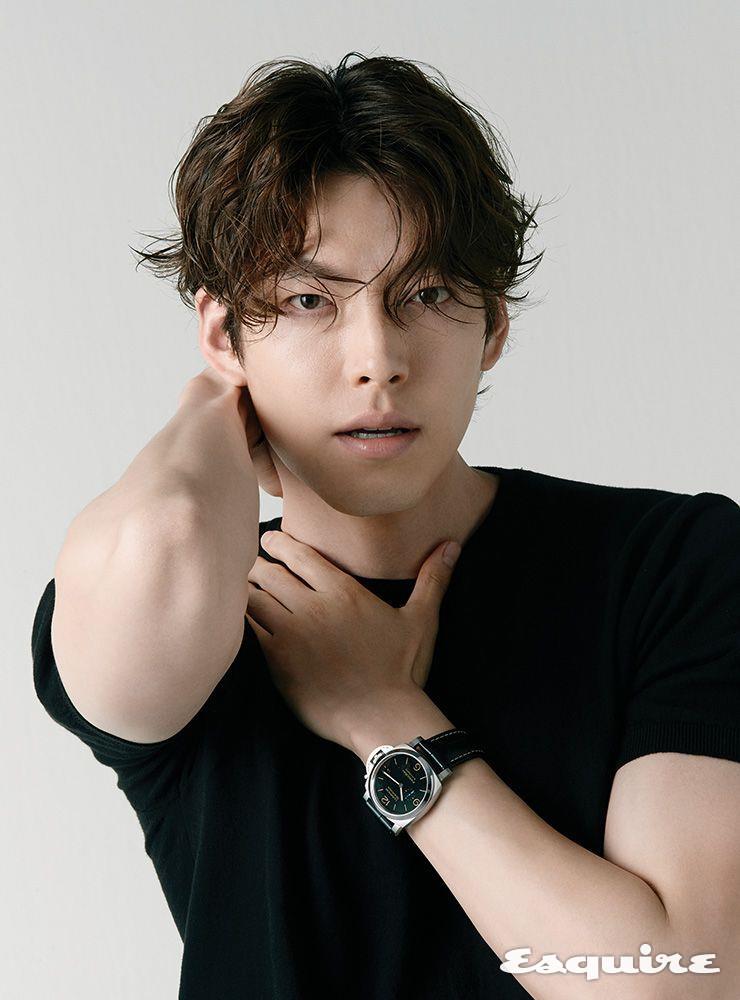 The interviewer mentioned to Kim Woo Bin that while he began his career as a model, he hasn’t done many photo shoots after becoming an actor.

“That’s true, I’ve done fewer that I thought,” he said. “There have been a few years where I couldn’t, as well. Sometimes I’m also in projects and unable to take a break, so that can be a reason for that. Honestly, since I started out as a model, doing a photo shoot makes me feel like I’m returning to my hometown. So I’ve wanted to do shoots that feel a bit more relaxed.” 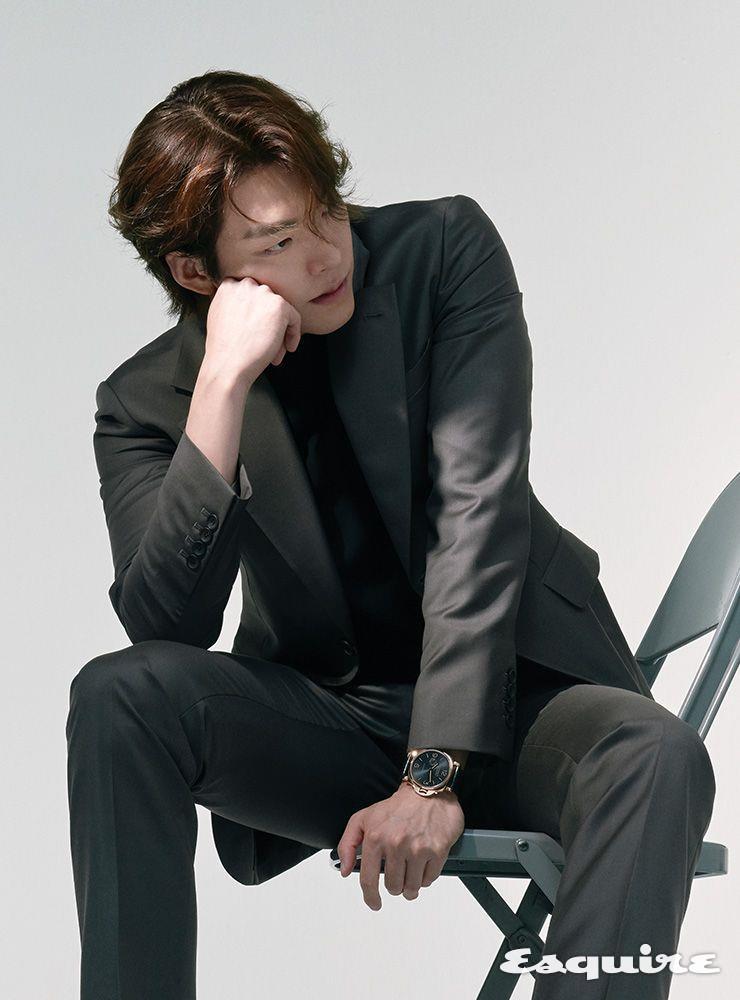 It was said to Kim Woo Bin that he’ll be meeting with fans through his upcoming film, and he was asked if he has any particular plans or preparations.

“Nothing in particular will be different,” he said, “since it’s my job to devote myself to my projects. I’m putting as much thought into it as I can, talking a lot with the director to ensure the film comes out well, and discussing with the other actors on set a lot too. The only thing might be that my mindset is a bit different; what should I call it — I think I have a lot of good energy, since I’ll be greeting my fans for the first time in a long time through a project. I feel grateful and excited over just that fact alone. Lately I enjoy going to set.” 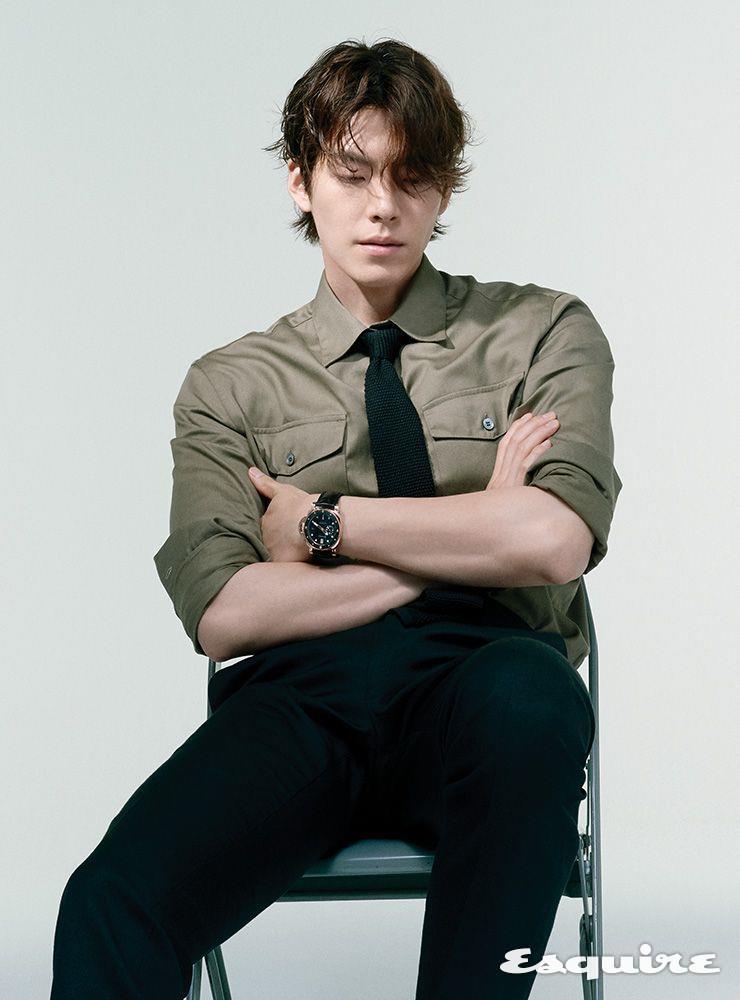 The actor also held a fan meeting at the end of last year. “It was just so great,” he said about it. “I was really thankful, and I felt like I was meeting people who are truly on my side, since it was an event where everyone attending was really someone who’d waited for me.” 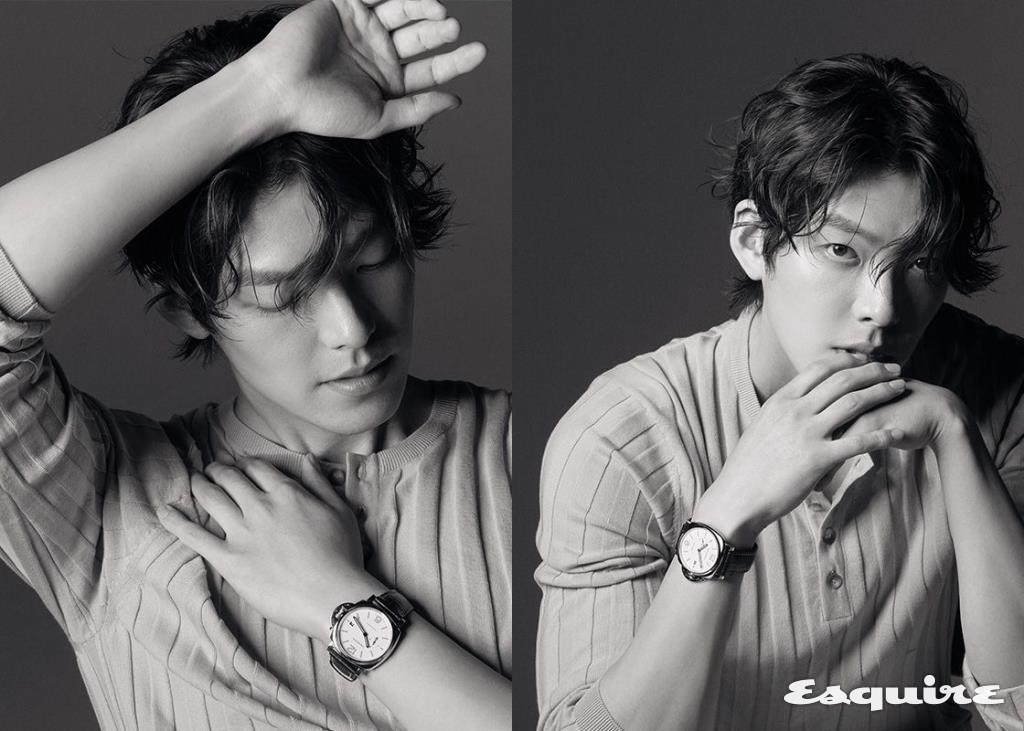 The interviewer suggested that might be why he’s ended up playing a lot of criminals, and Kim Woo Bin said with a laugh that there’s been five or six times that he’s played characters that are the best at fighting in their school. “I wanted to play roles that were a bit different from that too,” he commented.

When the interviewer said they’d heard he hadn’t been the type to fight at school, Kim Woo Bin replied with a laugh, “Well, I wasn’t the best at fighting in school.”

In regard to deviant behavior, Kim Woo Bin said, “There wasn’t anything big. I never ran away from home or anything like that, but at the same time I wasn’t a model student. I suppose I was somewhere in between?” 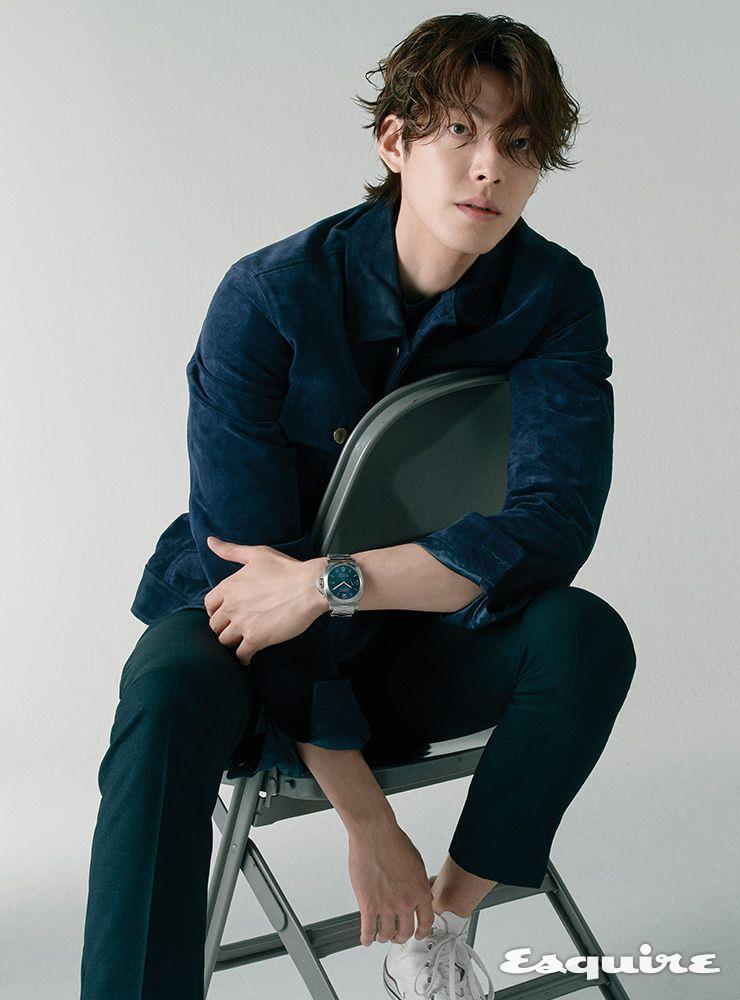 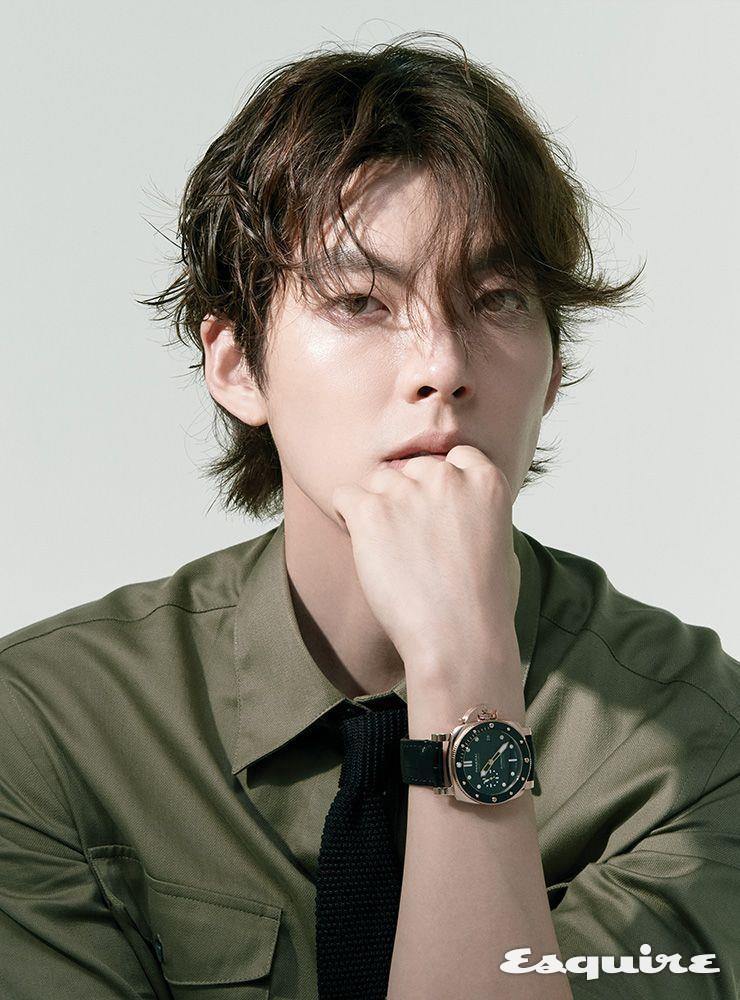 On the topic of which of his characters is the most similar to him, Kim Woo Bin said, “There’s an equal amount of myself in all my roles, and as time goes in I think that spectrum changes. Compared to when I was in my 20s, my real life now has become calmer. Maybe it’s because I’ve been resting for a while, but I’ll now even search to find out the species of the tree in front of my home. In the past, I would have had no idea what species the tree in front of my home was and I wouldn’t even have been interested. I also used to really hate going to the mountains.”

The interviewer commented that that could be due to him getting older, rather than due to him taking a break, mentioning a photographer friend who’s turned from only taking photos of models to now focusing on flowers.

“I really had no interest in flowers or trees, but now I like them,” responded Kim Woo Bin. “I also really enjoy finding out what species they are. I wasn’t like this in the past, but I use an app to look up what the plants are that I see every day in front of my home.” He shared that the app is called “moyamo.”

“The best thing about that app is that if you take a photo and upload it, so many users will reply within just five minutes,” he said. “I just have to tap to get an answer, so then I look at it and go, ‘Oh, so this is a lilac. I’ve heard the name lilac before but now I know what it looks like.'”

When the interviewer shared that they developed a similar interest in flowers later in life, Kim Woo Bin said, “I see, so it’s because I’ve got older. But I really enjoy it. When I see the seasons changing, I think, ‘This month, such-and-such a flower will bloom.’ I think, ‘It’s April, so lilacs will bloom now. I’ll be able to smell their fragrance.’ It’s a feeling of waiting, like ‘Soon, there will be plums on the plum trees.'” 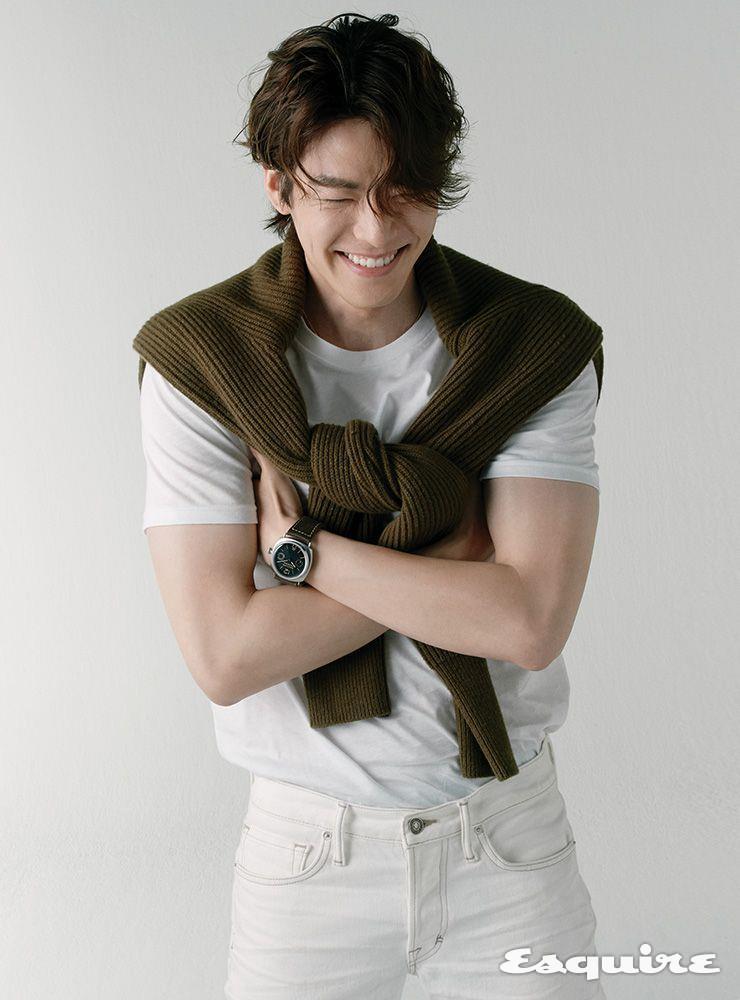 Later on, Kim Woo Bin said that while characters such as “the best fighter at school” weren’t similar to him, he enjoyed it. He said, “Since I spent my twenties like that, I wonder if now in my 30s I’ll be able to show a fresh mindset and a face that’s changed a bit.” 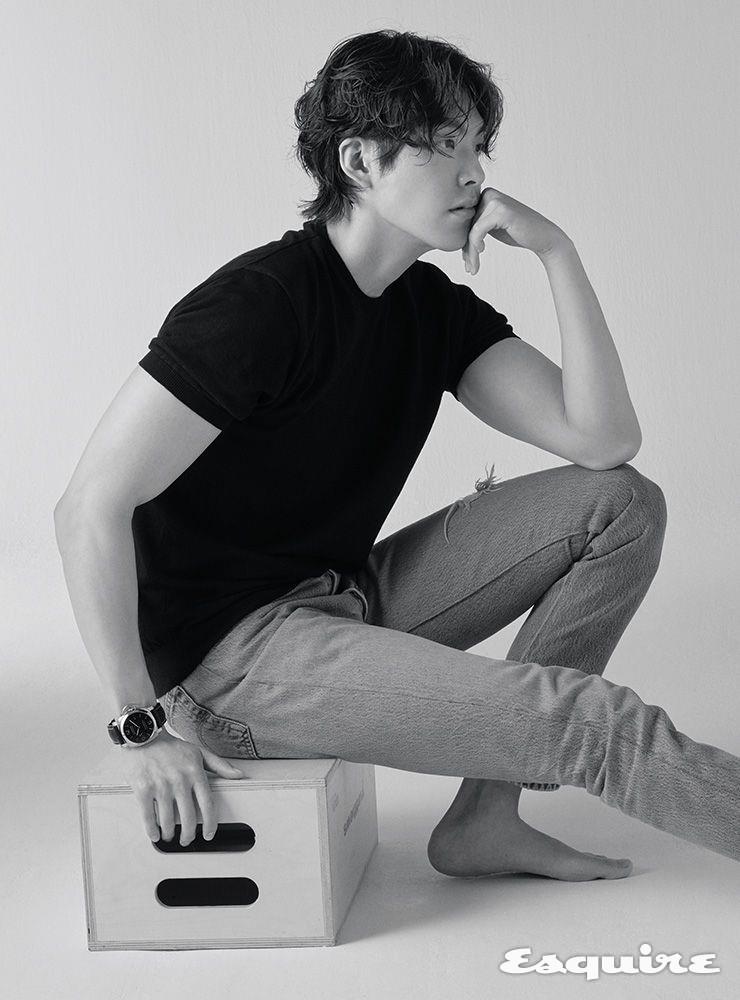 The interviewer asked if his 20s seem like a nightmare when he looks back on them, due to all his ambition and a lot being on his mind.

“Still, my 20s were really great too, since I was busy and living an intense life,” he said. “There was even one point in the past where I lived at a sauna. I didn’t have any money when I was 20 years old and I didn’t want to get help from my parents, so I lived at a sauna, but I enjoyed those days a lot too. There’s something I’ve realized though. Since I’ve been resting and looking back on that time, I realized that when I was in my 20s, I wasn’t living in the present, I was living in the future. I was harsh on myself and living in pursuit of my goal.”

“I think I couldn’t really enjoy the present back then,” he continued. “For example, when you work out, you should enjoy the act of working out but you end up focusing on your goal. I think if you think about the present, you feel less stress, more happiness, and more gratitude.” 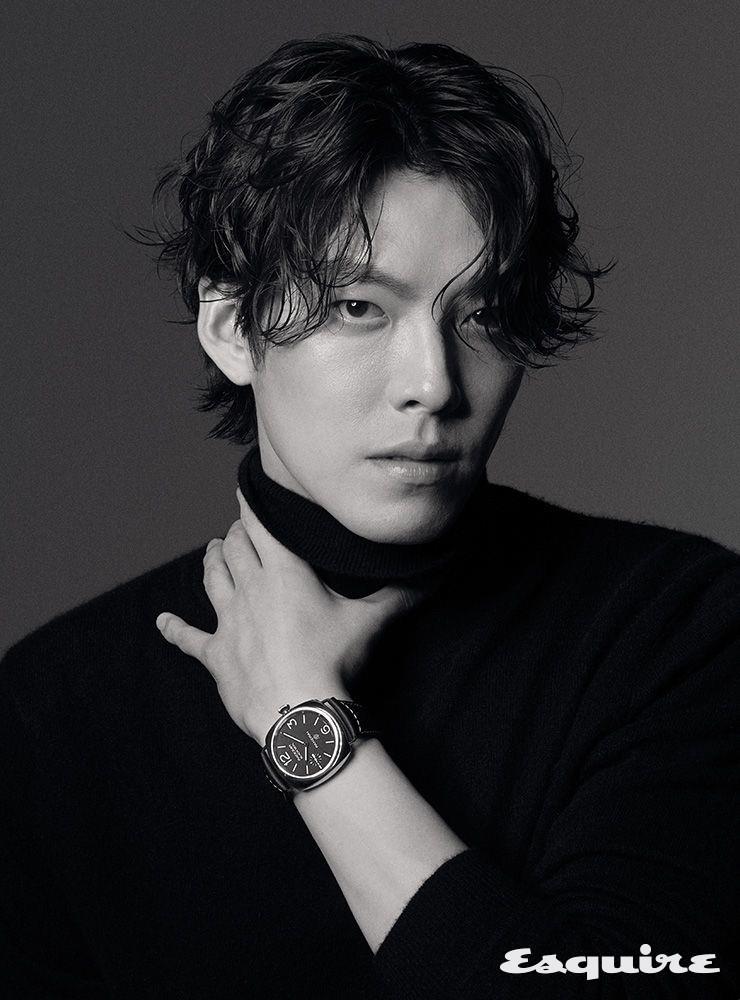 Kim Woo Bin also shared a story about becoming an actor after starting out as a model. “My debut project was a drama called ‘White Christmas,’ and most of my co-stars were models. The director was always giving us notes. He’d say, ‘Don’t stand in a cool way, don’t walk in a cool way.’ We were standing and walking in a cool way without even realizing it. After that, I started to put a lot of thought into how I walk. For example, for my character Heung Soo in ‘School 2013,’ I put a lot of thought into it on my own and said to myself, ‘I think Heung Soo would walk like this. I think Heung Soo would run like this.'” 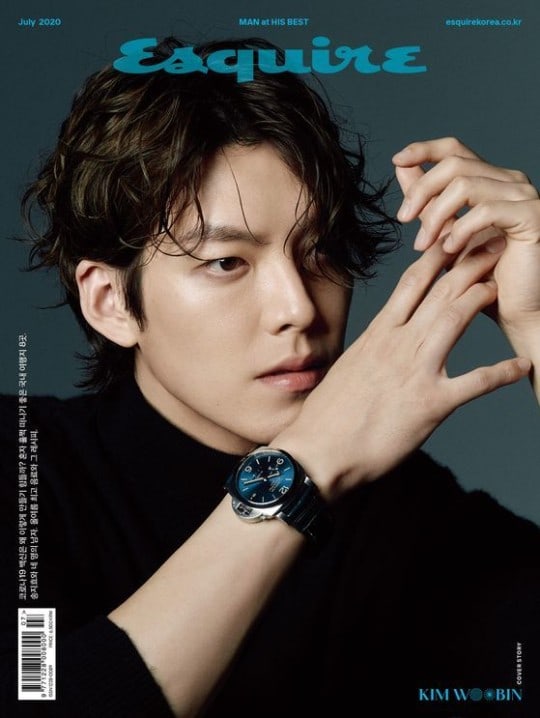 Kim Woo Bin recently signed with a new agency, AM Entertainment, who also houses his long-time girlfriend Shin Min Ah. After going on hiatus in 2017 to focus on treatment for nasopharyngeal cancer, he’s gearing up for a comeback. Last year, Kim Woo Bin received a warm welcome from the industry and his fans when he returned to the public eye as a presenter at the Blue Dragon Film Awards, and he also recently narrated the MBC documentary program “Humanimal.”

Watch Kim Woo Bin in the drama “Uncontrollably Fond” below!

Esquire Korea
Kim Woo Bin
How does this article make you feel?